Accessibility links
Mulvaney Shows Up For Work At Consumer Watchdog Group, As Leadership Feud Deepens : The Two-Way Deputy Director Leandra English argues that she is the rightful head of the Consumer Financial Protection Bureau. But the White House has made a rival appointment — OMB Director Mick Mulvaney. 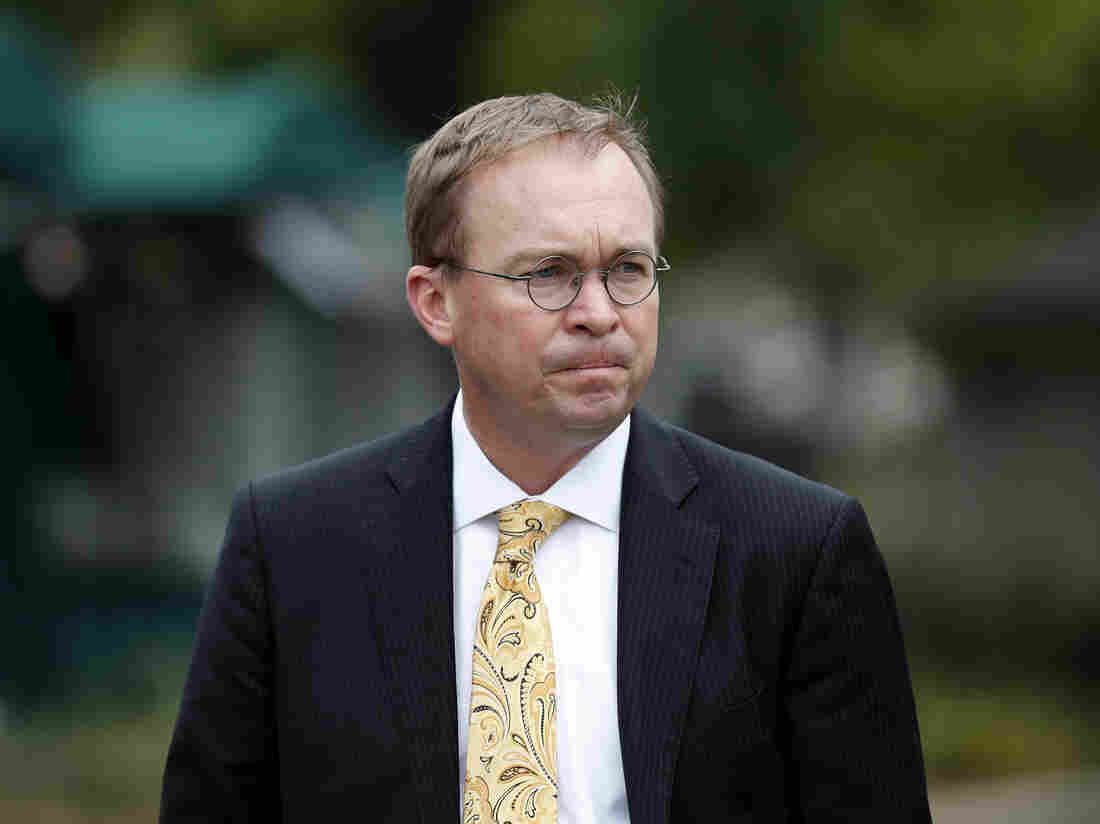 Director of the Office of Management and Budget Mick Mulvaney departs after a television interview at the White House in September. Alex Brandon/AP hide caption 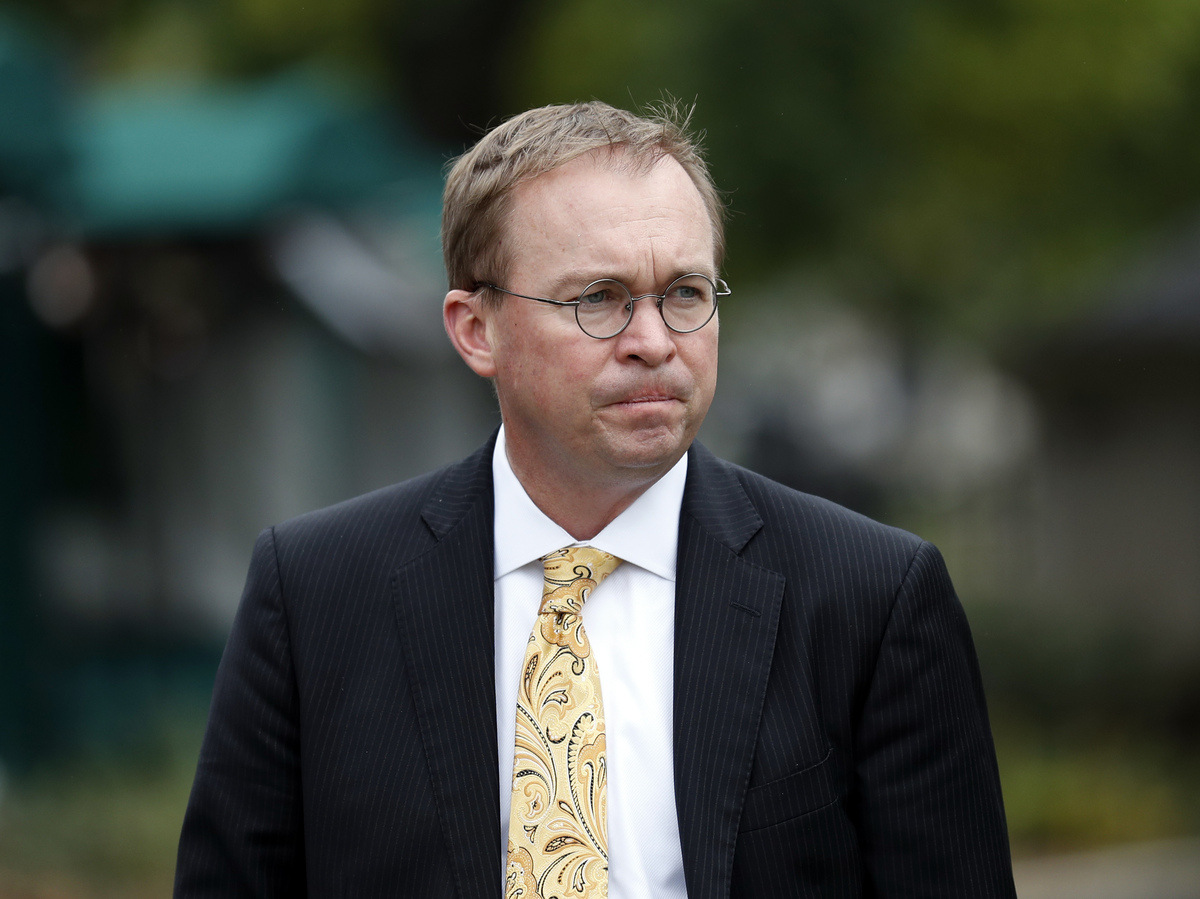 Director of the Office of Management and Budget Mick Mulvaney departs after a television interview at the White House in September.

The new head of the Consumer Financial Protection Bureau started work Monday — whoever that is.

President Trump's pick to lead the consumer watchdog, Mick Mulvaney, arrived at the office early Monday morning with a bag of Dunkin' Donuts in hand. Mulvaney, the director of the Office of Management and Budget, is the acting director of the group until Trump can get a permanent leader through the Senate confirmation process — at least, according to the Trump administration.

But the former head of the CFPB, Richard Cordray, appointed Leandra English to lead the group following his departure. He named her as deputy director on Friday, his last day at the head of the group, hours before Trump named Mulvaney. English has since filed a complaint in U.S. district court in Washington, D.C., to block the Trump administration's rival appointment.

Judge Timothy Kelly held a hearing on English's complaint but did not issue an immediate ruling.

On Monday morning, English was communicating with CFPB staff through an all-staff email — a Thanksgiving message expressing gratitude and saying it was an "honor" to work with her colleagues. She signed the message, a copy of which was sent to NPR, as "Leandra English, Acting Director."

Mulvaney, meanwhile, sent a competing all-staff, advising staff to "please disregard" messages from English in her "presumed capacity as Acting Director." In that email, which was also acquired by NPR, Mulvaney celebrated his "very smooth transition" into the role of acting director — and invited staff to stop by for a doughnut.

The dispute has left CFPB staff "scratching their heads over who was in charge," as Reuters reports.

But the doughnuts, at least, were "a big hit," according to former Trump transition official and current OMB Communications Director John Czwartacki.

Inquiries to CFPB communications staff — including a question as to whether English is physically in the building — were directed to Czwartacki, who works for Mulvaney.

And the plot thickens; Reuters reports that Senate Democratic Leader Chuck Schumer and Sen. Elizabeth Warren (the "intellectual mother" of the CFPB) are meeting with English to discuss the leadership of the bureau. 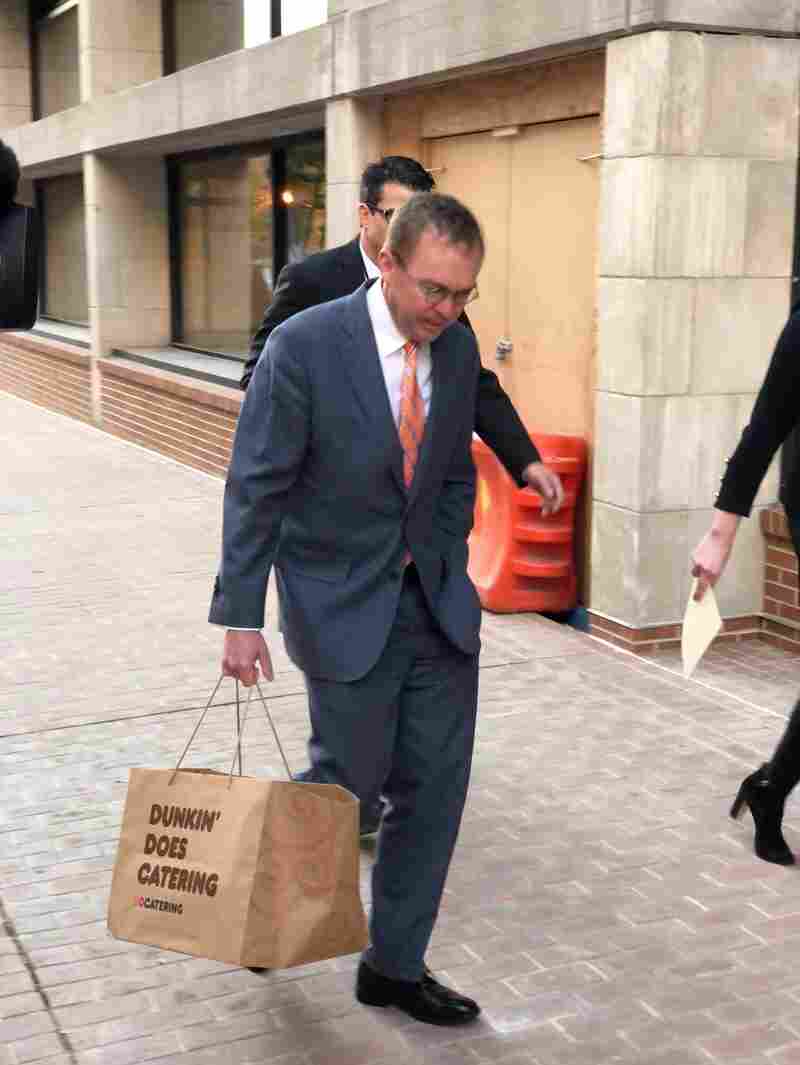 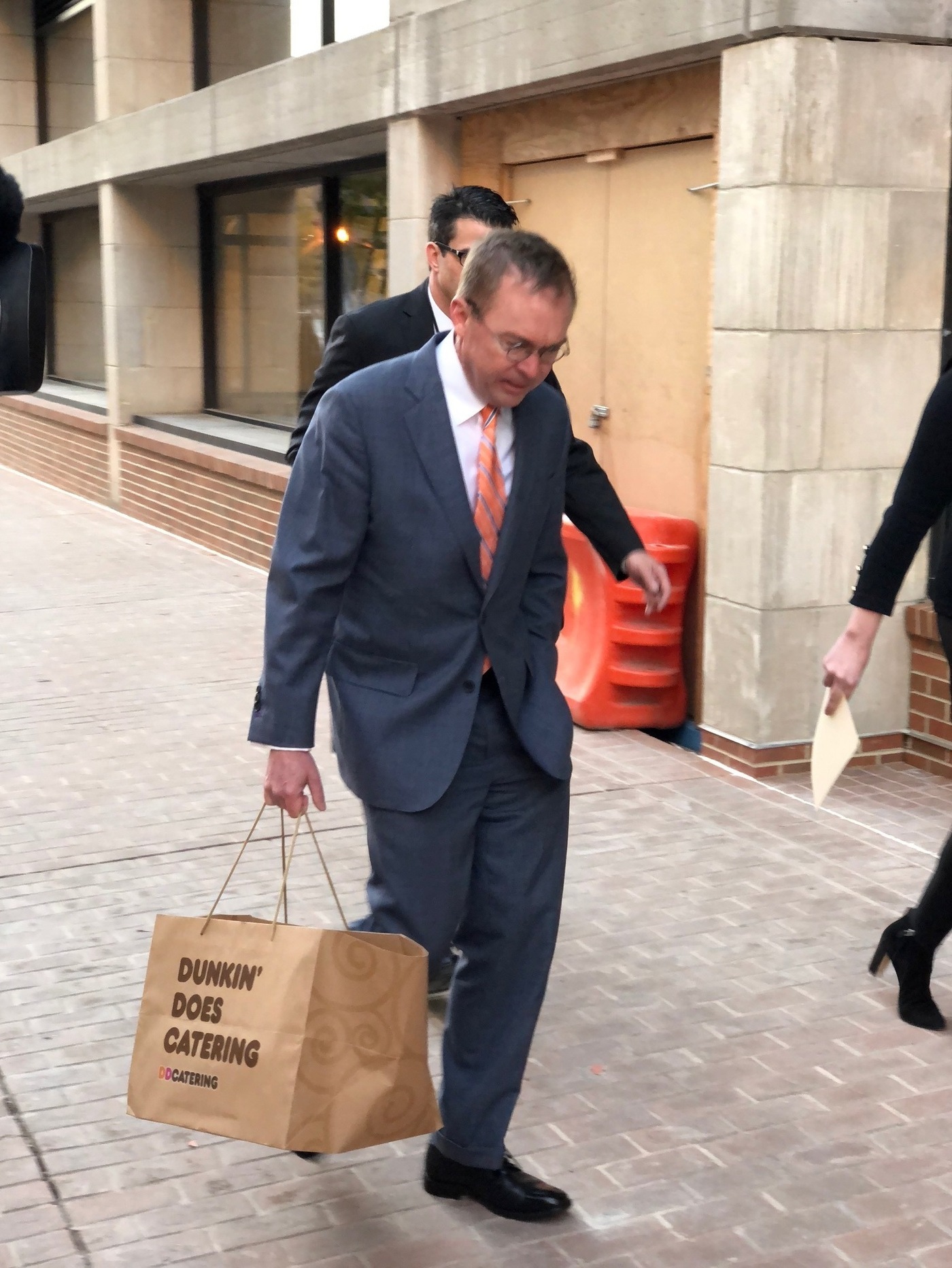 Everyone agrees that the next permanent director of the CFPB will be appointed by the president and confirmed by the Senate. The question is who leads the group in the meantime.

The dual appointments stem from partisan politics over the role of the bureau and from a dispute over which law governs filling an interim vacancy at the top. The 2010 Dodd-Frank Act, the law that created the CFPB, says it is the outgoing director's prerogative, but the administration says the Federal Vacancies Reform Act of 1998 reserves that appointment for the president.

The complaint filed late Sunday by English states that "the president's purported or intended appointment of defendant Mulvaney as Acting Director of the CFPB is unlawful."

"The president may not, consistent with the statutory requirement of independence, install a still-serving White House staffer as the acting head of an independent agency," the suit reads.

Trump's Department of Justice, meanwhile, has advised the president that he does have the authority to install a new acting director. In a memo dated Saturday, Assistant Attorney General Steven Engel wrote that while the president does not have the exclusive authority to appoint an acting director, such a move is an acceptable "alternative" to following the Dodd-Frank process. (As Politico and The Intercept have noted, Engel previously represented a payday lender that the CFPB was suing for deceptive and illegal lending practices. Court records show that Engel left that case earlier this month, stepping away as the lead defense attorney after his confirmation to the Department of Justice.)

Politico also reports that the CFPB's general counsel, Mary McLeod, has sided with the president. In a Nov. 25 memorandum obtained by Politico, McLeod writes: "As General Counsel for the Bureau, it is my legal opinion that the President possesses the authority to designate an Acting Director for the Bureau," adding, "I advise all Bureau personnel to act consistently with the understanding that Director Mulvaney is the Acting Director of the CFPB."

Cordray was confirmed as head of the bureau in 2013, two years after being nominated by President Barack Obama. But since Trump took office, he has found himself at frequent loggerheads with the administration, which has been openly disdainful of the bureau and its aims. Mulvaney has been among the harshest critics of the CFPB, the organization he's now tasked with leading.

As NPR's Miles Parks wrote on Friday, "Because of the agency's broad mandate, whoever is empowered as director has a huge role in deciding what or how much the organization decides to regulate."

"The bureau's unusual structure, which vests power in a single director with a five-year term, has been a lightning rod since its creation. Businesses have accused the agency and Cordray of regulating by fiat and litigation and argued for more transparency. They've also challenged the CFPB's constitutionality in court, in a lawsuit that could be decided within weeks or months.

Yet numerous polls have shown that consumer advocates remain strong champions of the agency's work. The bureau says it has delivered $12 billion in relief, including canceled debt and compensation, to customers wronged by banks, credit unions, payday lenders and credit card companies."

The Associated Press has more on the history of the watchdog group:

"The CFPB was proposed by now-Sen. Elizabeth Warren, D-Mass., in her previous job at Harvard Law School, and it was created as part of the laws passed following the 2008 financial crisis and subsequent recession. It was given a broad mandate to be a watchdog for consumers when they deal with banks and credit card, student loan and mortgage companies, as well as debt collectors and payday lenders.

"The idea was to prevent financial companies, such as mortgage servicers, from exploiting consumers. Critics had said those kinds of companies had been subject to weak oversight before the financial crisis.

"The CFPB gets its funding from the Federal Reserve, and its director is given significant leverage to go after what he or she considers important. The director can be removed only 'for cause,' such as neglect of duty, and not over political differences. The structure of the agency has long been a sticking point because of arguments that it gives too much power to a single agency director and limits the president's ability to replace that person. ...

"Under the leadership of its first director, Richard Cordray, the CFPB implemented or proposed myriad new rules and regulations for the banking industry. Nearly every American who deals with banks or a credit card company or has a mortgage has been affected by rules the agency put in place."