Accessibility links
'Complicit' Is The Word Of The Year In 2017, Dictionary.com Says : The Two-Way The website defines complicit as "choosing to be involved in an illegal or questionable act, especially with others; having complicity."

'Complicit' Is The Word Of The Year In 2017, Dictionary.com Says

'Complicit' Is The Word Of The Year In 2017, Dictionary.com Says 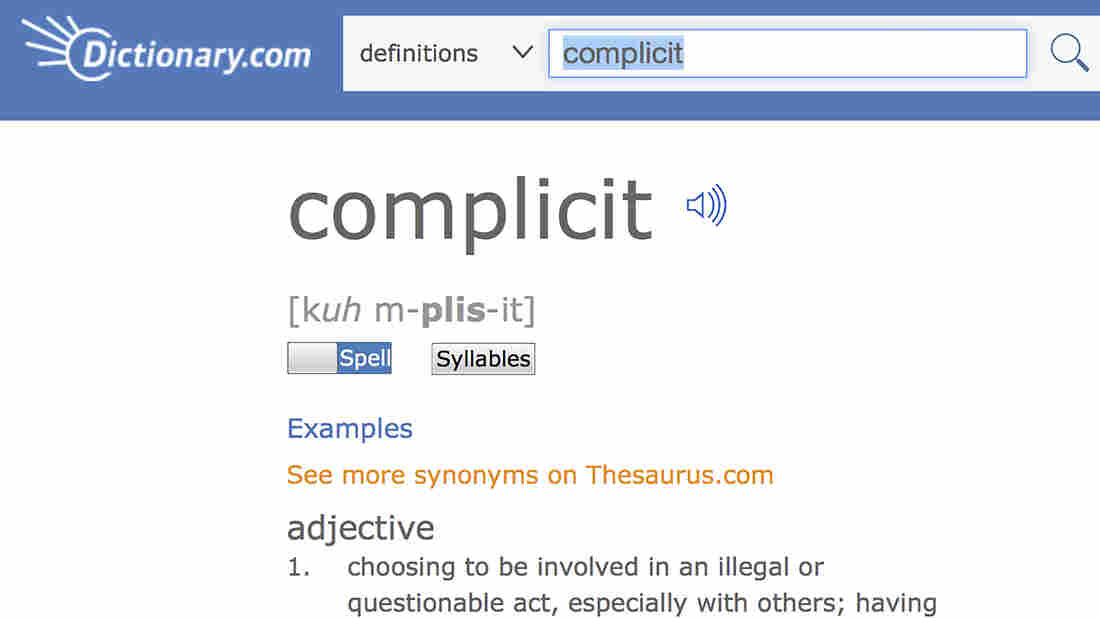 A screen shot provided by Dictionary.com shows the word "complicit," on its website. Dictionary.com says that "complicit" is its word of the year for 2017, citing its new relevance in politics and social commentary. AP hide caption 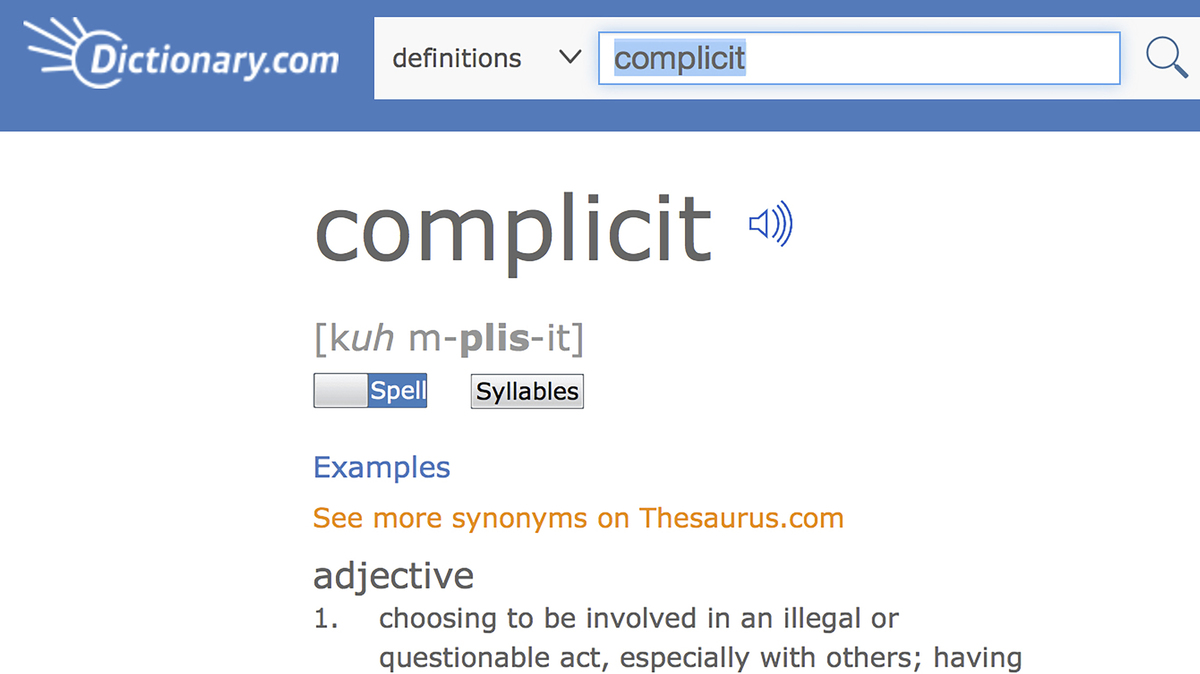 A screen shot provided by Dictionary.com shows the word "complicit," on its website. Dictionary.com says that "complicit" is its word of the year for 2017, citing its new relevance in politics and social commentary.

Dictionary.com has selected "complicit" as its word of the year for 2017, citing the term's renewed relevance in U.S. culture and politics — and noting that a refusal to be complicit has also been "a grounding force of 2017."

The website defines "complicit" as "choosing to be involved in an illegal or questionable act, especially with others; having complicity."

Interest in the word spiked several times this year, Dictionary.com says — most notably when Ivanka Trump said in April, "I don't know what it means to be complicit."

That remark came weeks after Saturday Night Live aired a segment in which Scarlett Johansson portrayed President Trump's daughter in a skit to tout a luxury fragrance called Complicit. Its tagline: "The fragrance for the woman who could stop all this, but won't."

The term spiked a third time, Dictionary.com says, after Sen. Jeff Flake, R-Ariz., announced in October that he won't seek re-election to Congress, citing a "flagrant disregard for truth or decency" in the Trump administration.

"It is time for our complicity and our accommodation of the unacceptable to end," Flake told his fellow Republicans.

While those headline-grabbing mentions helped drive interest in and use of the term in the political arena, Dictionary.com says complicity also lurked behind many of the biggest stories of 2017. As examples, it listed humanity's role in contributing to climate change, the normalizing of hate speech and supremacist groups, and the tacit enabling of sexual harassment.

Referring to the spate of allegations of sexual assault and harassment against Hollywood producer Harvey Weinstein and a number of other high-profile men, Dictionary.com says, "These powerful men could not have harmed so many people for so many years without the complicity of their associates and the established practice of 'turning a blind eye' to misconduct."

The choice for the word of 2017 made us curious to see how much more prevalent the word has become in NPR's coverage. A Google search for "complicit" on NPR.org returned 142 results from Jan. 1 through Nov. 27, 2017, compared with 75 results for the same period in 2016. A search of our audio archives found the word in 51 NPR transcripts, compared with 33 results during the same time period in 2016.

Choosing a word of the year is always an attempt to capture the zeitgeist. In the case of complicity in 2017, the site says, "It's a word that reminds us that even inaction is a type of action. The silent acceptance of wrongdoing is how we've gotten to this point."

But the site also highlighted instances of action, and refusals to accept reprehensible or questionable conditions. It cited Sen. Flake's stand as an example of that trend; it also noted the international Women's March that took place in January, and the use of the hashtag #metoo to raise awareness of sexual assault and harassment.

In 2016, Dictionary.com's word of the year was xenophobia, citing a surge in interest from users both in the U.S. and around the world.