Accessibility links
'Washington Post' Says It Foiled Apparent Sting By James O'Keefe's Activist Group : The Two-Way Post reporters say a woman approached them saying she had gotten pregnant as a teen by Alabama Senate candidate Roy Moore. But suspicions were confirmed when she was seen at Project Veritas' offices. 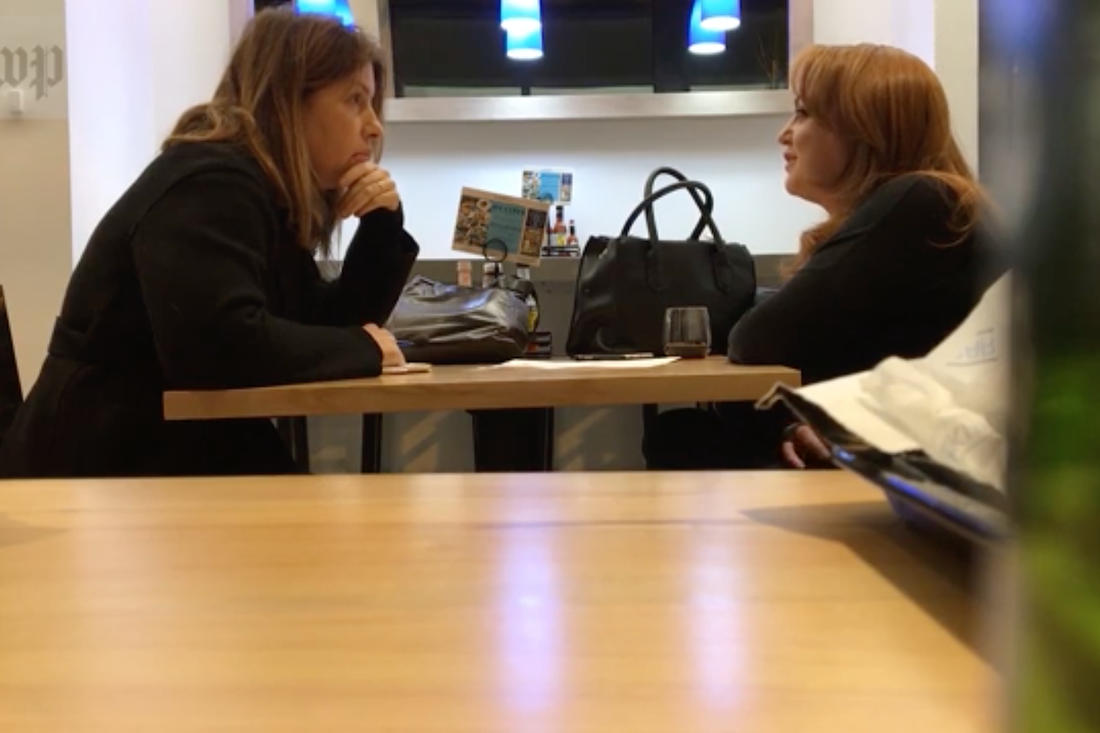 The Washington Post published video of reporter Stephanie McCrummen (left) speaking to Jaime Phillips, who claimed to be a source for a story about embattled politician Roy Moore. Days later, members of the paper's staff watched Phillips walk into the offices of activist James O'Keefe's Project Veritas organization. The Washington Post/Screenshot by NPR hide caption 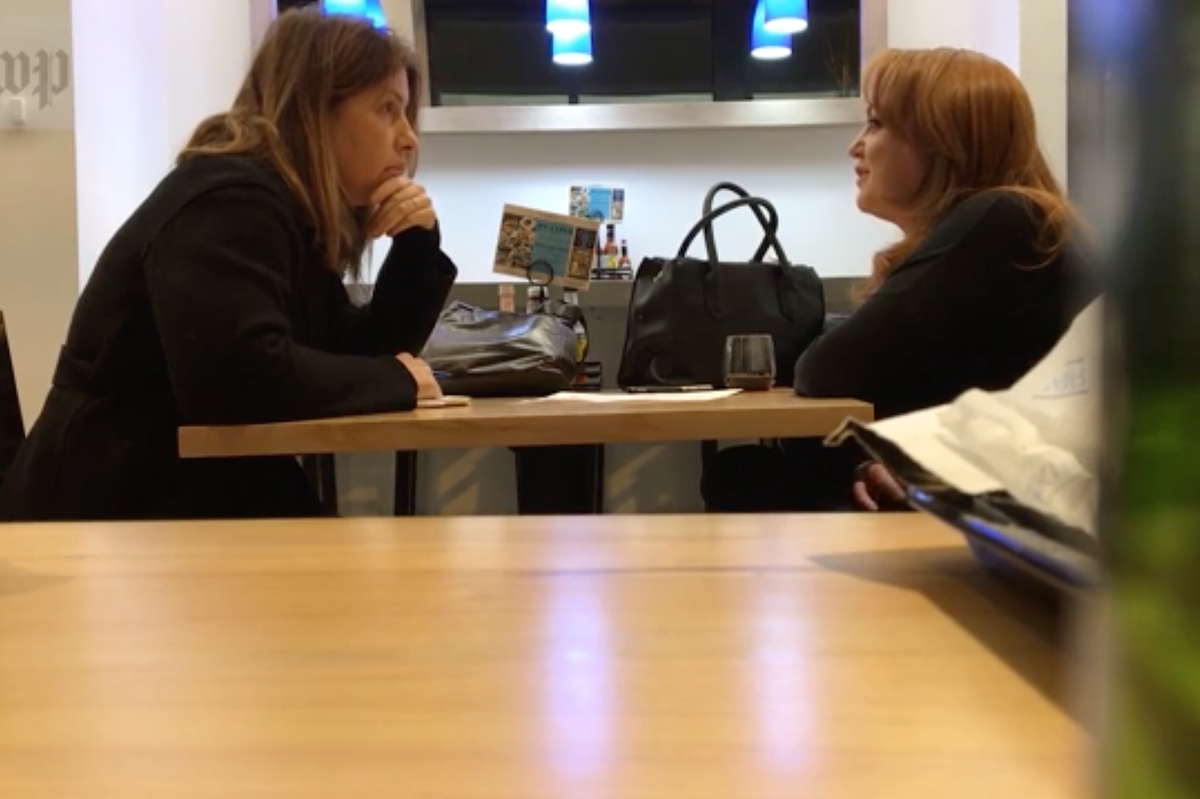 The Washington Post published video of reporter Stephanie McCrummen (left) speaking to Jaime Phillips, who claimed to be a source for a story about embattled politician Roy Moore. Days later, members of the paper's staff watched Phillips walk into the offices of activist James O'Keefe's Project Veritas organization.

The Washington Post/Screenshot by NPR

The Washington Post says a woman who approached reporters with a story that Alabama Senate candidate Roy Moore got her pregnant as a teen actually "appears to be part of undercover sting operation" run by conservative activist James O'Keefe — suspicions the newspaper says were confirmed when the woman was spotted walking into the offices of Project Veritas on Monday.

O'Keefe, who founded Project Veritas, is countering the newspaper's story with his own narrative, releasing secretly recorded videos of Post employees that he says prove "how shockingly one-sided their editorial team is."

O'Keefe and the Post have put out dueling videos of a brief interview outside his offices on Monday in which the conservative activist seeks to turn the tables and question Post reporter Aaron C. Davis, who repeatedly asks O'Keefe whether the woman works for him.

The Post also published video footage of one of its reporters speaking to the woman who claimed to be Moore's victim. In it, reporter Stephanie McCrummen asks her who she is working for and tells her, "If there's anything you want to say about why you're here and how you came to be sitting here, I really would like to know that story as well."

The Post says the apparent sting operation began with an email that was sent to reporter Beth Reinhard the morning after she and McCrummen wrote a Nov. 9 story breaking the news that several women said Moore, a Republican running for U.S. Senate, pursued them as teenagers — including one who said he sexually assaulted her when she was 14 and he was 32.

The email promised "I might know something" about Moore — and after a series of communications through the Signal encrypted messaging service, the woman eventually said that her name was Jaime Phillips and that she was willing to meet in person.

In separate interviews with Reinhard and McCrummen, Phillips "shared a false story about an alleged sexual relationship in 1992 with Moore" that led to an abortion when she was 15, the Post says. The newspaper adds that Phillips also tried to get the journalists to say whether her allegations might sink the political prospects of Moore, who left a controversial career as a judge to embark on what has become an even more controversial senatorial campaign.

The reporters grew skeptical over inconsistencies in Phillips' story. And then Post researcher Alice Crites found a GoFundMe page posted earlier this year by someone named Jaime Phillips seeking donations to fund a move to New York after accepting "a job to work in the conservative media movement to combat the lies and deceipt [sic] of the liberal MSM."

The poster wrote about moving from Atlanta to New York to work as a researcher and fact-checker "to help our movement." Of the two donations listed on the page, the Post says one was made by someone with the same name as Phillips' daughter.

"McCrummen agreed to meet Phillips that afternoon," the Post says, an encounter that took place at the Souvlaki Bar restaurant in Alexandria, Va., last Wednesday. The newspaper describes a brief chess match as the reporter put her purse down on the table to block a possible camera in Phillips' purse — only to have Phillips reposition her bag.

Confronting Phillips with a printout of the GoFundMe page, McCrummen said, "So I just wanted to ask you if you could explain this, and I also wanted to let you know, Jaime, that this is being recorded and video recorded."

Phillips acknowledged the ad as hers, but she said the job had fallen through — and that it had been a position she interviewed for at The Daily Caller, a conservative news website. She also said she no longer felt comfortable going public with her story and soon took her leave. And again, Post reporters said they found that the new details provided in that meeting did not check out.

The newspaper had positioned videographers in the restaurant; on Monday, it also sent a reporter and videographer to Mamaroneck, N.Y., where O'Keefe's Project Veritas offices are located. There, the Post says, they watched Phillips park her car and enter the building.

The apparent connection between Phillips and O'Keefe led the Post to take the rare step of publishing remarks that had previously been off the record.

"We always honor 'off-the-record' agreements when they're entered into in good faith," said Martin Baron, The Post's executive editor. "But this so-called off-the-record conversation was the essence of a scheme to deceive and embarrass us. The intent by Project Veritas clearly was to publicize the conversation if we fell for the trap. Because of our customary journalistic rigor, we weren't fooled, and we can't honor an 'off-the-record' agreement that was solicited in maliciously bad faith."

In its report, the Post describes a flurry of propaganda attacks meant to discredit its reporting on Moore.

In one instance, the paper says, conservative media outlet Gateway Pundit repeated false allegations that a Post reporter had offered money to women willing to accuse the Republican Senate candidate. In another, a pastor said he received a fraudulent voice mail from a man claiming to be a Post reporter named "Bernie Bernstein" — who, again, was offering thousands of dollars to any woman who would make claims against Moore.

O'Keefe's Project Veritas is a tax-exempt organization that has reported more than $8 million in contributions — its sole source of declared revenue — since it was founded in March 2011, according to federal filings collected by ProPublica.

In the past, O'Keefe has carried out "sting" operations against a variety of organizations, including NPR in 2011. He first rose to prominence in 2009, when his undercover video of ACORN employees giving advice on tax breaks and home loans for a business involving underage El Salvadoran girls led to the group losing federal funding.