Accessibility links
Sole Defendant In Benghazi Attacks Convicted Of Terrorism Charges — But Not Murder : The Two-Way Ahmed Abu Khatallah was accused of orchestrating the siege on a U.S. diplomatic compound in the Libyan city. That attack, which left four Americans dead, has become a political flashpoint in the U.S. 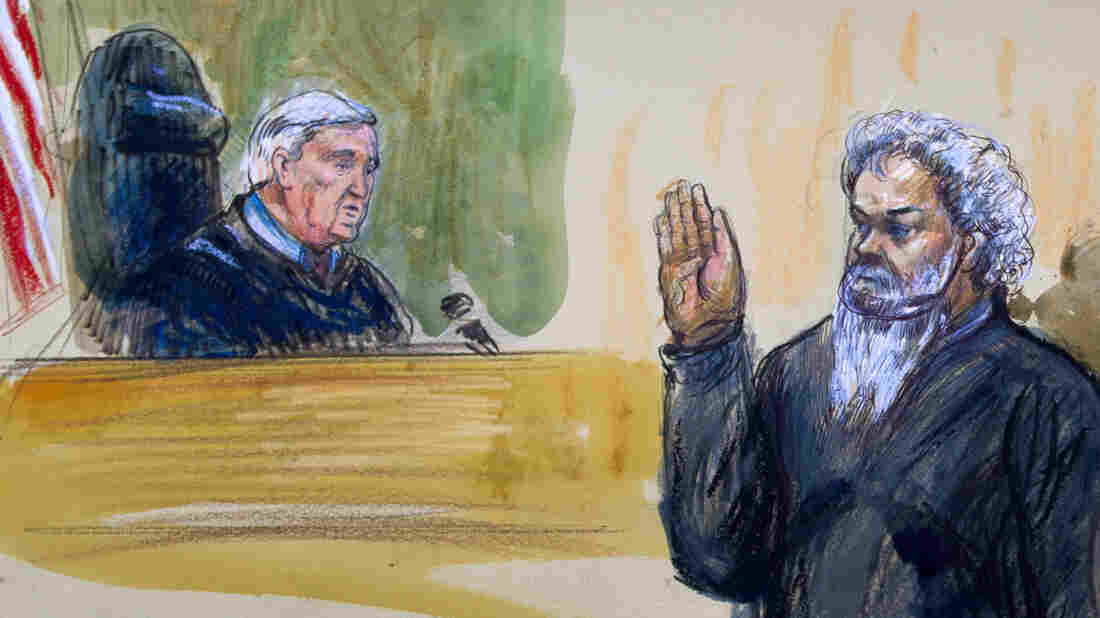 An artist's rendering shows Ahmed Abu Khatallah being sworn in by Judge John Facciola at the U.S. District Court in Washington, D.C. The Libyan was accused of masterminding the deadly attack in Benghazi in 2012. Jose Luis Magana/AP hide caption 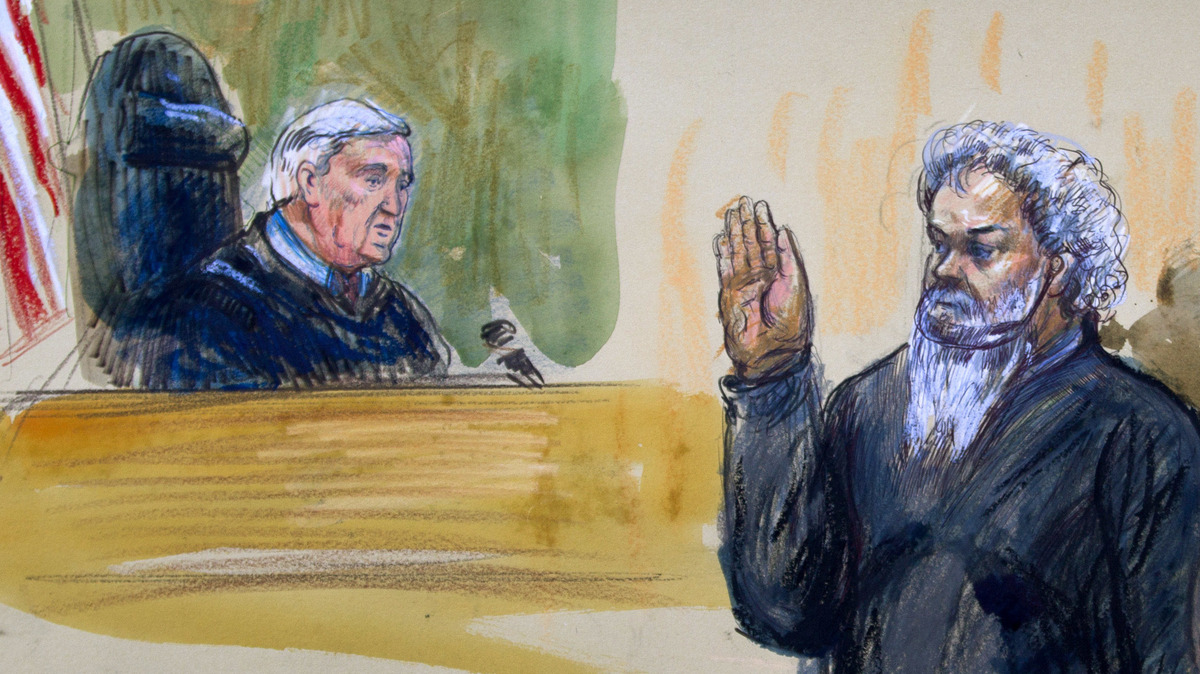 An artist's rendering shows Ahmed Abu Khatallah being sworn in by Judge John Facciola at the U.S. District Court in Washington, D.C. The Libyan was accused of masterminding the deadly attack in Benghazi in 2012.

More than five years after militants stormed a U.S. diplomatic compound in Benghazi, killing four Americans including the ambassador, the Libyan man charged with orchestrating the siege has been convicted of terrorism charges. Yet in its verdict Tuesday, the jury acquitted Ahmed Abu Khatallah of the most serious charges against him, including murder.

Khatallah remains the sole suspect charged for the deadly siege on Sept. 11, 2012, when roughly 20 armed militants stormed the compound in a barrage of gunfire, grenades and mortar attacks. The Justice Department alleged that "he conspired with others to attack the facilities, kill U.S. citizens, destroy buildings and other property, and plunder materials, including documents, maps and computers containing sensitive information."

Still, after a trial that lasted nearly two months, the jury returned a mixed verdict on Khatallah, 46, finding him guilty on just four of the 18 charges lodged against him. While he still faces up to 60 years in prison for crimes including conspiracy to provide material support for terrorism, he nevertheless avoided blame for the deaths of Ambassador Chris Stevens, Sean Smith, Tyrone Woods and Glen Doherty.

The Justice Department did not seek the death penalty in this trial.

"Today, a small measure of justice was meted out," CIA Director Mike Pompeo said in a message to the agency after the verdict Tuesday. "A federal jury convicted Ahmed Abu Khatallah for the terror he inflicted upon the patriotic men and women — from the State Department and CIA — in Benghazi, Libya on the night of September 11, 2012. It took intelligence to find him, soldiers to assist in capturing him, law enforcement to interview him, and a legal team to put him away."

"No term in prison will bring our people back," Pompeo added, lauding the memory of the men who died that night.

As NPR's Carrie Johnson noted, the trial promised to hinge partly on how the U.S. government handled its interrogation of Khatallah after American forces captured him in Libya in 2014.

"U.S. District Judge Christopher Cooper ruled that Khatallah was not mistreated by U.S. Special Operations Forces during their nighttime capture raid, brushing aside photos of the defendant with bruises and gashes on his face.

"The judge found that the method of interrogating Khatallah, starting with questions from a high-value-detainee intelligence team, taking a break, and then renewing the sessions with a 'clean' group of FBI agents, passed legal muster. ...

"The judge in Khatallah's case also said that taking 14 days to bring the defendant to court in the U.S. after transporting him, slowly, on the USS New York was reasonable given the extraordinary circumstances in the case."

Once the trial kicked off, prosecutors sought to portray Khatallah as consumed by burning hatred for the U.S., calling him a "stone-cold terrorist" during arguments in the courtroom. Relying on phone records and drone videos, they presented him as a ringleader, rather than a man directly pulling the trigger.

Or, as one prosecutor put it: "You will not hear that he lit the match or fired the mortar. It does not matter."

The defense, for its part, countered by saying that Khatallah was merely being demonized by association and that in the absence of compelling evidence, the prosecution was simply playing to jurors' emotions. Defense attorneys also cast doubt on the prosecution's witnesses, saying the informants could not be trusted because they were paid — $7 million, in the case of one Libyan witness.

Outside the courtroom, the attack in Benghazi has proved nearly as contentious.

Since nearly the moment that deadly event ended, the attack in Benghazi has been a political flashpoint in the U.S. It has been an issue in two presidential elections, with Republicans criticizing how the Obama administration — including then-Secretary of State Hillary Clinton — handled the violence and its aftermath.

GOP lawmakers in the House also led an in-depth investigation into the attack, which lasted roughly two years and found that the Obama administration had been negligent in the face of intelligence warnings and slow in its response.