Accessibility links
Suspect In October New York Truck Attack Pleads Not Guilty : The Two-Way Sayfullo Saipov, a 29-year-old immigrant from Uzbekistan, is accused of killing eight people and injuring a dozen others on a Manhattan pedestrian and bike path last month. 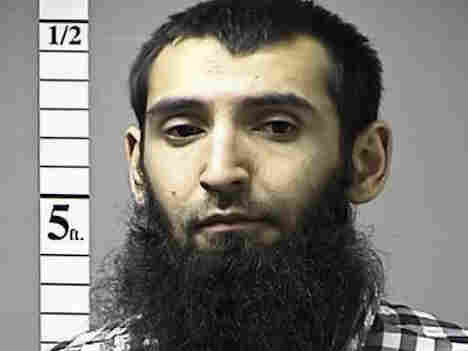 The man accused of driving a truck into a crowded pedestrian and bicycle path in New York City, killing eight and injuring a dozen others, has pleaded not guilty to murder and terrorism-related charges.

Sayfullo Saipov, 29, who arrived in the U.S. from Uzbekistan in 2010, entered the plea in U.S. District Court in Manhattan in connection with the Oct. 31 vehicle attack.

Saipov, who was arrested immediately after the attack, is accused of murder and attempted murder and of providing "material support" to a terrorist organization – namely the Islamic State, which has claimed responsibility.

After the attack, investigators say Saipov told them he was inspired by watching Islamic State propaganda videos and that "he felt good about what he had done," NPR's Joel Rose reports.

His court-appointed lawyer declined to comment after the hearing.

Days later, President Trump tweeted that Saipov "SHOULD GET DEATH PENALTY!" and perhaps be sent to U.S. military's detention center at Guantanamo Bay, Cuba. As The Washington Post has noted, the president's "off-the-cuff remarks seemed to risk complicating matters for federal prosecutors."

After Saipov's plea on Tuesday, his court-appointed attorney, David Patton, declined to comment on the case, according to Reuters.

In the attack, Saipov is alleged to have driven a rented Home Depot pickup onto the bike path along the West Side Highway, mowing down people until the vehicle collided with a school bus. After the crash, he allegedly jumped out of the truck yelling "God is great" in Arabic.

A note referring to ISIS was found inside the truck, New York Gov. Andrew Cuomo said at the time of the attack. But it was only days later that the extremist group claimed responsibility, saying "The attacker is one of the caliphate soldiers."

Even so, authorities reportedly believe Saipov was a "lone wolf."

The Islamic State has also claimed responsibility for a number of similar vehicle attacks in Europe.

"ISIS began aggressively promoting vehicle attacks a year ago with detailed instructions in its online magazine Rumiyah, or Rome. It's so named because ISIS dreams of eventually seizing Rome, historic center of the church.

The article encourages assailants to use the biggest, heaviest vehicle they can obtain, and aim for the largest crowd they can find. The assailants are instructed to keep driving as long as possible, but if they can't continue, then the driver should get out and use a 'secondary weapon,' like a gun or a knife, to attack people on foot.

'An appropriate way should be determined for announcing one's allegiance' to ISIS, the group adds. It suggests writing a note with statements like, 'The Islamic State will remain.'"

Reuters says Saipov's sister, Umida Saipova, told the news agency in a phone interview earlier this month from Tashkent, Uzbekistan, that she believed her brother had been "brainwashed." Reuters says it also interviewed an Uzbek acquaintance of Saipov living in Ohio, Mirrakhmat Muminov, who said that Saipov became religious after moving to the United States in 2010.