Accessibility links
Matt Lauer Fired By NBC News After Complaint Of 'Inappropriate Sexual Behavior' : The Two-Way "On Monday night, we received a detailed complaint from a colleague about inappropriate sexual behavior in the workplace by Matt Lauer," NBC News Chairman Andrew Lack said in a statement. 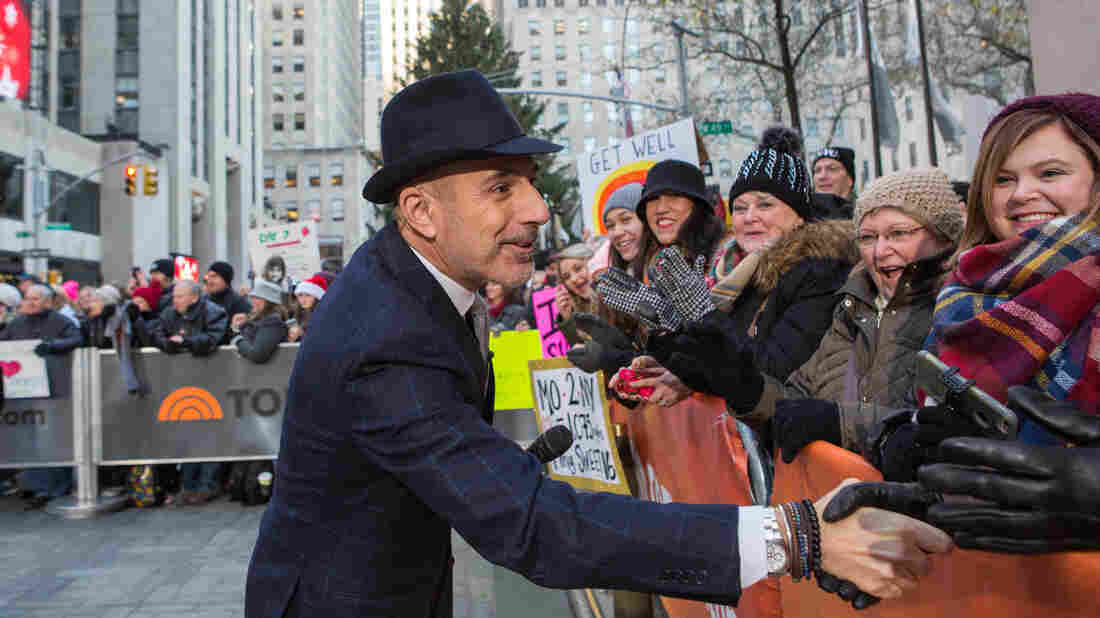 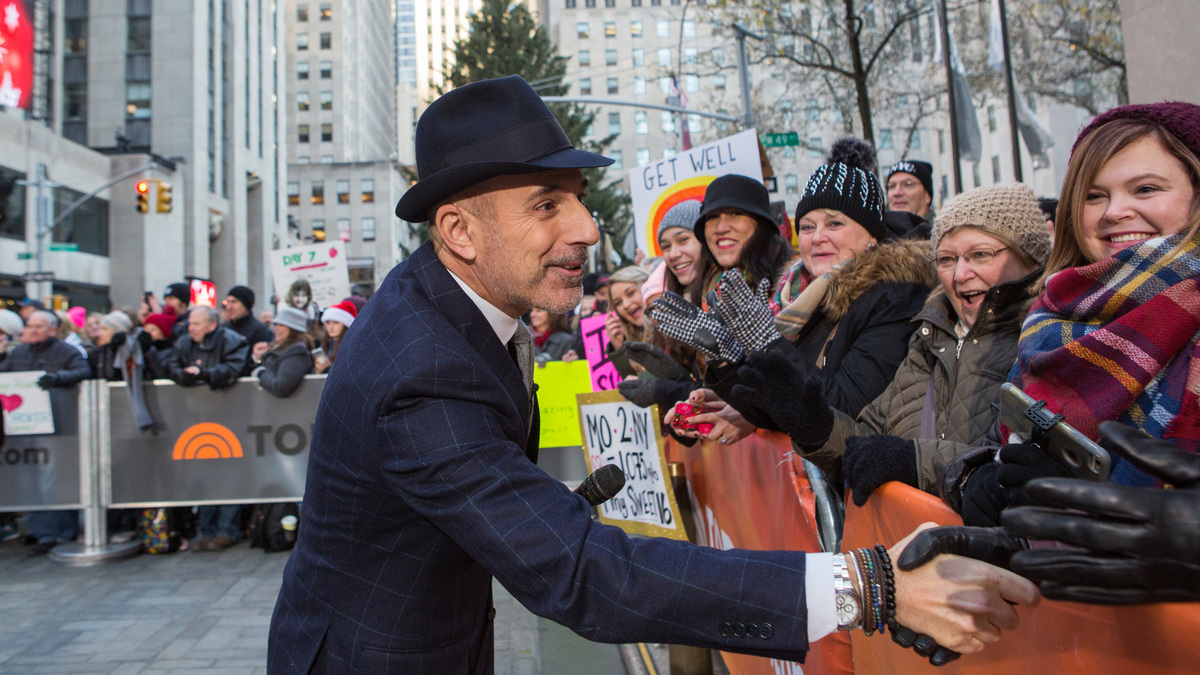 Longtime Today host Matt Lauer greets people in the crowd on Monday. He is the latest high-profile media figure to be accused of sexual misconduct.

"On Monday night, we received a detailed complaint from a colleague about inappropriate sexual behavior in the workplace by Matt Lauer. It represented, after serious review, a clear violation of our company's standards. As a result, we've decided to terminate his employment. While it is the first complaint about his behavior in the over twenty years he's been at NBC News, we were also presented with reason to believe this may not have been an isolated incident."

Lack added that NBC wanted to "create a workplace environment where everyone feels safe and protected" and that management is "deeply saddened by this turn of events."

NBC said Wednesday evening that, after the firing was announced, the company received two more complaints against Lauer.

Lauer's agent so far has not responded to requests for comment.

NPR's David Folkenflik reports that the allegation against Lauer was brought by "a younger colleague" who cited "Lauer's conduct at the 2014 Olympics" in Sochi, Russia.

The woman, who has not been identified, said that she was sexually harassed by Lauer at the Olympics and that the harassment continued afterward.

"NBC is the largest single player at the Olympics — it's the games' longtime American broadcaster and underwriter," David notes. "Lauer was the brightest network star there."

At the time that the one woman came forward with her complaint, NBC also knew that Variety and The New York Times were both "reporting on Lauer's behavior toward women," David reports.

Variety reports that multiple women at NBC say they were sexually harassed by Lauer. The story is based on a two-month investigation during which the magazine conducted "dozens of interviews with current and former staffers," including three women whose accounts were corroborated by friends and colleagues who were told of the harassment at the time. The three women asked to remain anonymous for fear of professional repercussions.

Lauer allegedly gave a female colleague a sex toy with an explicit note about how he wanted to use it on her. According to Variety, he exposed himself to another female employee and then "reprimanded her for not engaging in a sexual act," and he made lewd comments verbally or in text messages in front of other employees, including references to their performance in bed.

The report quotes "a former producer who knew first-hand of these encounters" as saying that Lauer's fame and status as a married man prevented him from seeking sexual relations elsewhere. "So he'd have to do it within his stable, where he exerted power, and he knew people wouldn't ever complain," said the producer.

Lauer's conduct wasn't a secret at Today, according to numerous sources, Variety reports. But the popular host went to lengths to conceal his behavior.

"Lauer, who was paranoid about being followed by tabloid reporters, grew more emboldened at 30 Rockefeller Center as his profile rose following Katie Couric's departure from 'Today' in 2006. His office was in a secluded space, and he had a button under his desk that allowed him to lock his door from the inside without getting up. This afforded him the assurance of privacy. It allowed him to welcome female employees and initiate inappropriate contact while knowing nobody could walk in on him, according to two women who were sexually harassed by Lauer."

Lauer joined Today as the news anchor in 1994 and became a co-anchor in 1997, according to NBC. He was the highest-paid person at NBC News, as David reports, taking in more than $20 million annually as "the core of the Today show, the economic engine that propels NBC's news division."

After reading Lack's statement, Guthrie, who was joined by Today's Hoda Kotb, said, "As I'm sure you can imagine, we are devastated." She continued:

"For the moment, all we can say is that we are heartbroken. I'm heartbroken for Matt, he is my dear, dear friend and my partner, and he is beloved by many, many people here. And I'm heartbroken for the brave colleague who came forward to tell her story. And any other women who have their own stories to tell. And we are grappling with a dilemma that so many people have faced these past few weeks. How do you reconcile your love for someone with the revelation that they have behaved badly?"

Guthrie added that many media organizations are going through a "reckoning" that is "long overdue."

Folkenflik notes that Lauer showed up in gossip pages for his clashes with other NBC personalities, including former co-host Ann Curry, who left the Today show in tears. David continues:

"His treatment of women is coming in for greater review as well, including his unrelenting grilling of Hillary Clinton at a town hall in the lead-up to the presidential elections ... and the tough stance he took toward Bill O'Reilly about the former Fox star's own accusations earlier this year.

"Lauer said, 'You don't let your No. 1 guy go unless you have information that you think makes him look culpable.'

"Now Lauer, NBC's longtime No. 1 guy, has been cut loose himself."

Lauer is one of a string of high-profile media figures to be accused of sexual misconduct.

CBS fired veteran host Charlie Rose last week after eight women accused him of sexual harassment over the course of more than a decade. Political journalist Mark Halperin, who was working as a commentator for MSNBC, was put on leave late last month over reports of sexually inappropriate behavior while he worked at ABC News. Two of NPR's senior news executives are no longer employed by the company following allegations of sexual misconduct.

And later Wednesday, Minnesota Public Radio announced it was cutting ties with radio personality Garrison Keillor over allegations of inappropriate behavior with someone who worked with him.