Accessibility links
Hundreds Of Eggs From Ancient Flying Reptile Are Found In China : The Two-Way The fossilized pterosaur eggs and embryos shed light on the Lower Cretaceous creature's development and nesting habits. The cache was found where the reptile was once abundant, dubbed Pterosaur Eden. 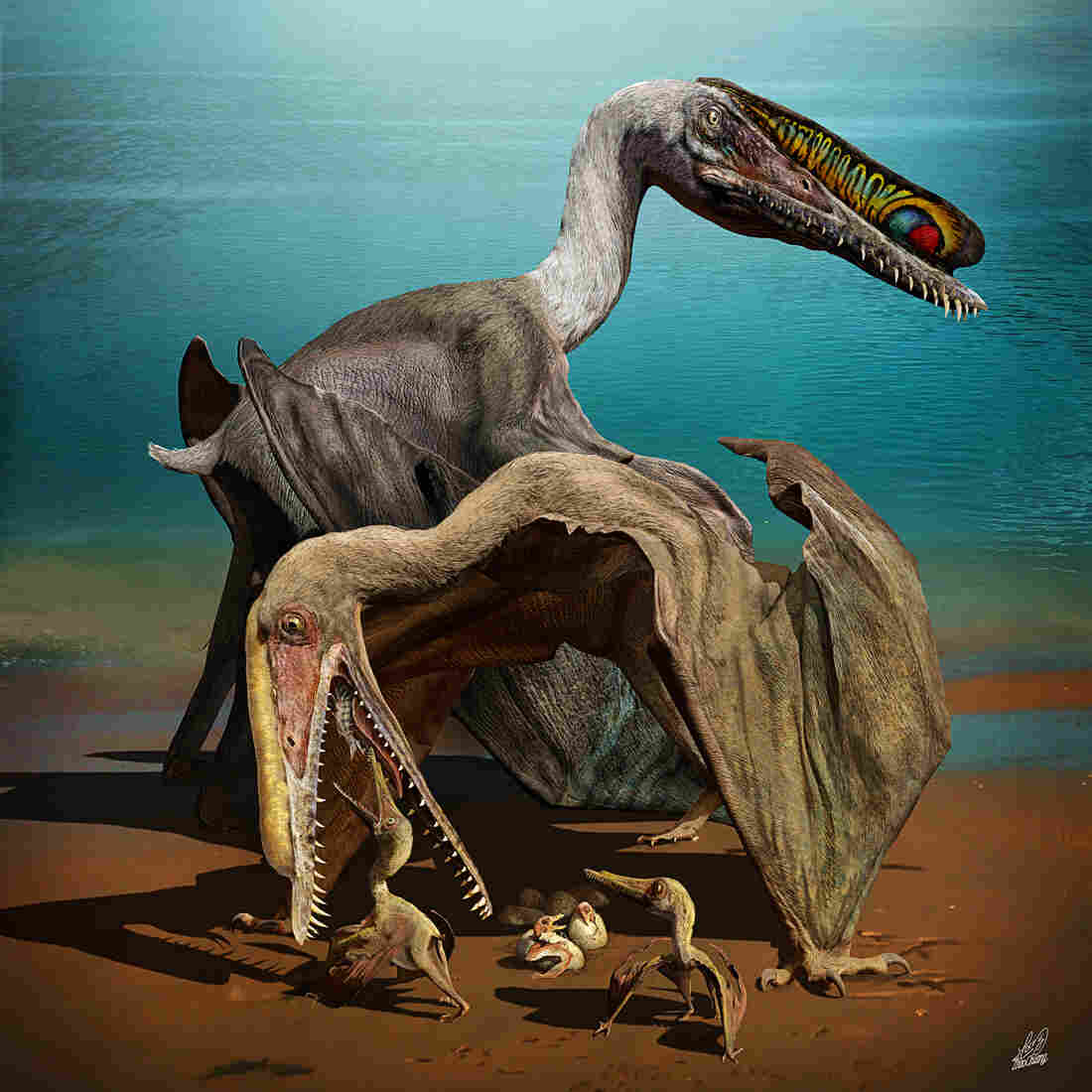 Artist's rendition of a family of pterosaurs, which had massive wingspans of up to 13 feet and likely ate fish with their large teeth-filled jaws. Illustrated by Zhao Chuang hide caption 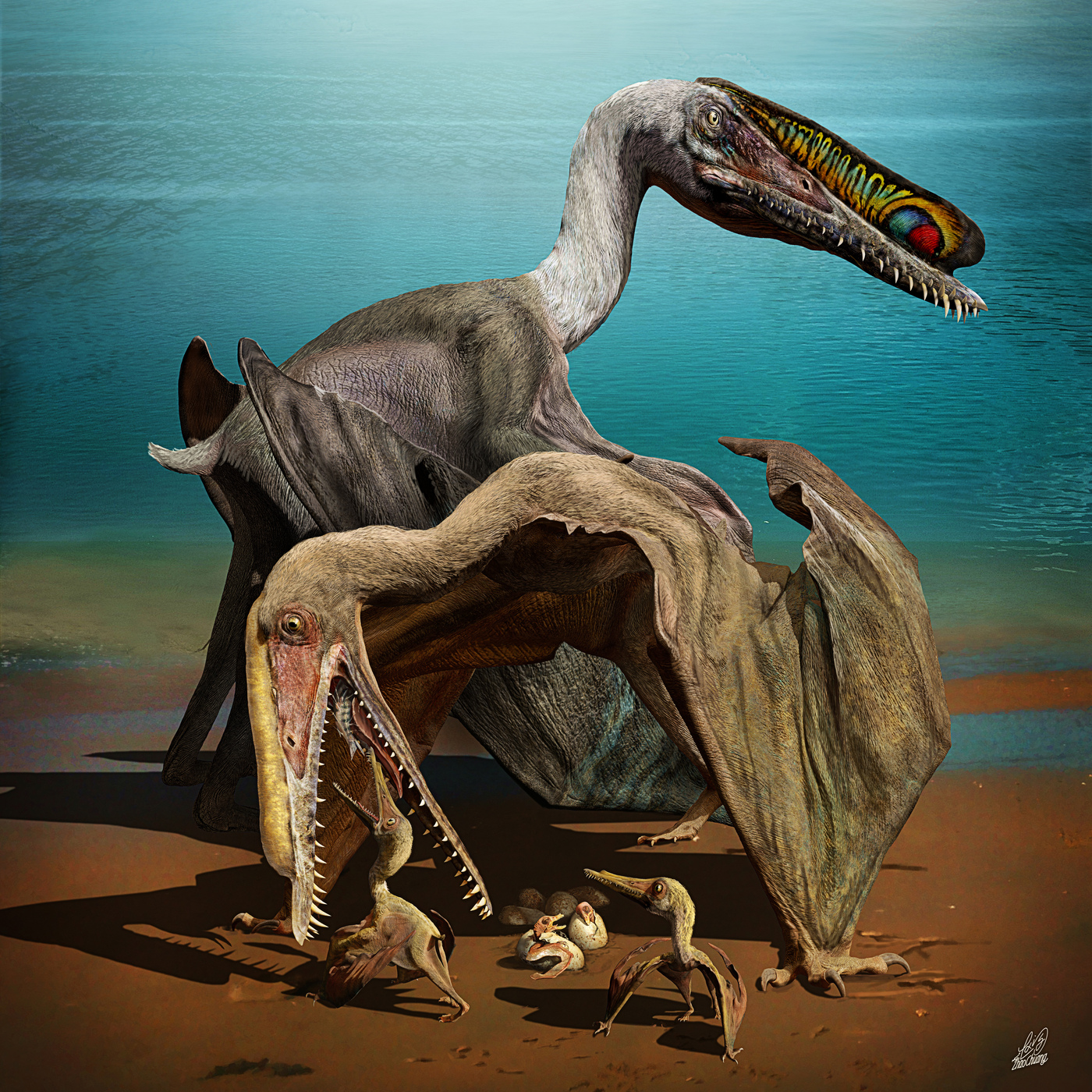 Artist's rendition of a family of pterosaurs, which had massive wingspans of up to 13 feet and likely ate fish with their large teeth-filled jaws.

A cache of hundreds of eggs discovered in China sheds new light on the development and nesting behavior of prehistoric, winged reptiles called pterosaurs.

Pterosaurs were fearsome-looking creatures that flew during the Lower Cretaceous period alongside dinosaurs. This particular species was believed to have a massive wingspan of up to 13 feet, and likely ate fish with their large teeth-filled jaws.

Researchers working in the Turpan-Hami Basin in northwestern China collected the eggs over a 10-year span from 2006 to 2016.

A single sandstone block held at least 215 well-preserved eggs that have mostly kept their shape. Sixteen of those eggs have embryonic remains of the pterosaur species Hamipterus tianshanensis, the researchers said in findings released today in Science.

The fossils in the area are so plentiful that scientists refer to it as "Pterosaur Eden," says Shunxing Jiang, a paleontologist at the Chinese Academy of Science's Institute of Vertebrate Paleontology and Paleoanthropology. "You can very easily find the pterosaur bones," he says, adding that they believe dozens more eggs might still lie hidden within the sandstone. 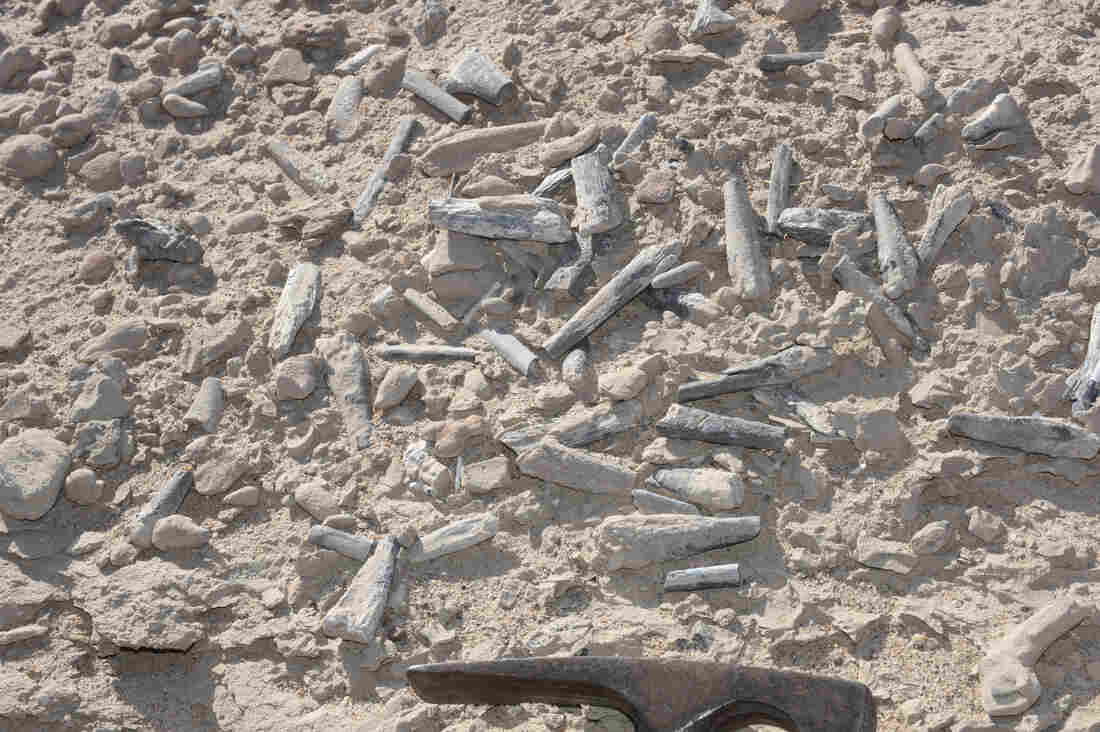 Hundreds of pterosaur bones from the Lower Cretaceous period lie on the surface of an excavation site in the China's Turpan-Hami Basin. Alexander Kellner/Museu Nacional/UFRJ hide caption

The 16 fossilized embryos are at different stages of growth, revealing new information about how the reptiles developed. None of the embryos are complete, the paper states, and the scientists used computed tomography scanning to view what was inside.

The discovery has kicked off debate about whether the creatures could fly as soon as they hatched. Some previous theories had posited that they could, but the paper suggests otherwise. The research team found that the animal's hind leg bones were more developed than the wings at the time of hatching, and none of the embryos were found with teeth.

"Thus, newborns were likely to move around but were not able to fly, leading to the hypothesis that Hamipterus might have been less precocious than advocated for flying reptiles in general ... and probably needed some parental care," the paper reads.

A separate commentary in Science calls the study "remarkable" but cautions against drawing firm conclusions about how the animal moved immediately after hatching. That's because it's hard to pinpoint just how close to hatching the embryos actually were.

"An alternative perspective is that the embryos were much younger than estimated and not close to hatching and that the lack of growth of teeth is therefore unsurprising," writes D. Charles Deeming from the University of Lincoln in the U.K.

The sheer number of eggs found together, the researchers say, suggest they belonged to clutches from multiple female pterosaurs and indicate that the animals may have bred in colonies.

It's worth noting that the massive discovery does not appear to include a nest. Jiang says the eggs had been moved from the place they were originally laid and may have been carried by water after a series of storms hit the animals' nesting ground.

There are many more mysteries that remain about pterosaurs, Deeming writes, such as whether the eggs were buried as they developed and how many eggs were in each clutch. "Hopefully additional finds of equally spectacular fossils will help us answer such questions for pterosaurs and allow us to paint an increasingly complete picture of reproduction in these extinct species," he concludes.