Accessibility links
4 Separatist Catalan Leaders To Remain In Jail, 6 Others Out On Bail : The Two-Way Spanish authorities took the politicians into custody after Catalonia, a formerly semiautonomous region, declared independence from Spain. Catalan's former president remains in exile in Belgium.

4 Separatist Catalan Leaders To Remain In Jail, 6 Others Out On Bail

4 Separatist Catalan Leaders To Remain In Jail, 6 Others Out On Bail 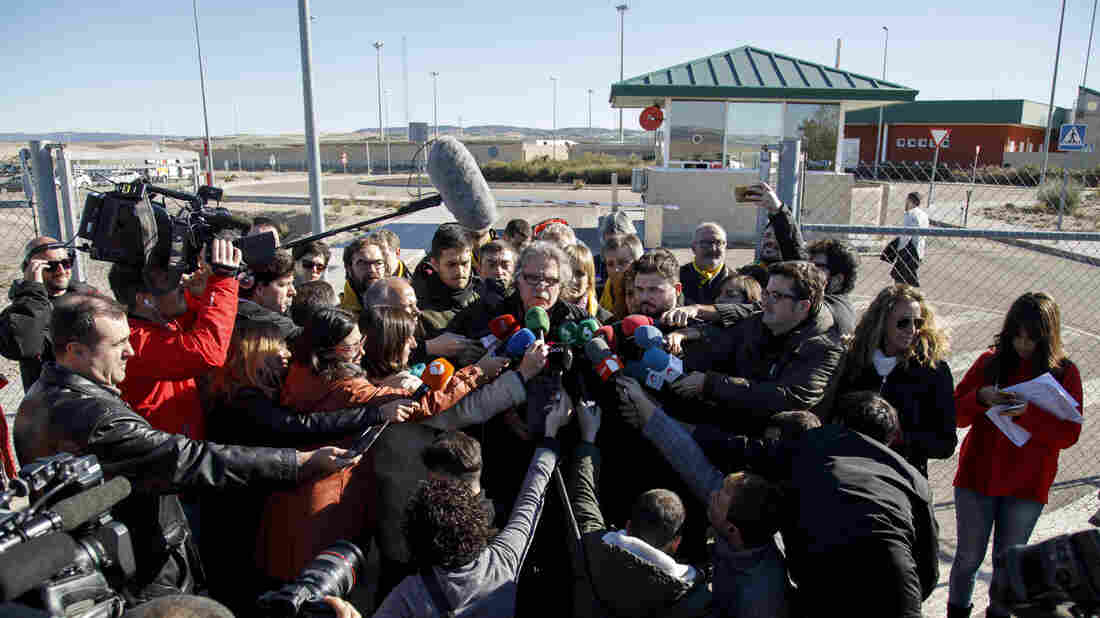 Catalan members of the Spanish parliament speak to the press outside Estremera prison, outside of Madrid, on Monday. A judge from Spain's Supreme Court granted bail to six imprisoned former members of the Catalan government, while two other politicians and two activists will remain in jail. Pablo Blazquez Dominguez/Getty Images hide caption 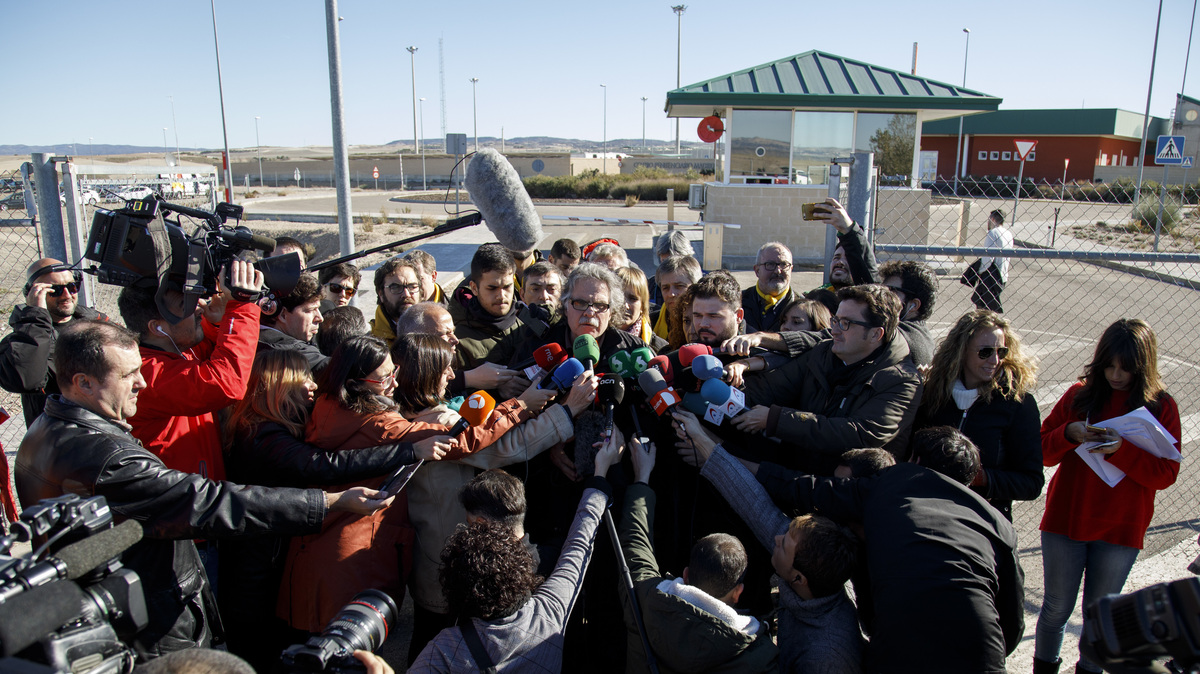 Catalan members of the Spanish parliament speak to the press outside Estremera prison, outside of Madrid, on Monday. A judge from Spain's Supreme Court granted bail to six imprisoned former members of the Catalan government, while two other politicians and two activists will remain in jail.

Four Catalan politicians and activists will remain in Spanish custody after a judge denied bail for the separatist leaders — including the erstwhile vice president of Catalonia, who is on the ballot for special elections on Dec. 21 and will be campaigning from behind bars.

Six other separatist leaders have been released on bail, to the tune of 100,000 euros (about $118,000) each, The Associated Press reports. The judge also ordered the confiscation of those politicians' passports.

Catalonia's ousted president, Carles Puigdemont, remains in exile in Belgium, along with four of his allies, the AP says. A Belgian court is expected to rule Dec. 14 on the possibility of extradition to Spain.

Ousted Catalan President Turns Himself In To Police In Brussels

The political leaders were arrested — or Puigdemont's case, fled the country — after Catalonia declared independence from Spain and Madrid responded with a crackdown.

The formerly semiautonomous region (which has its own language and culture) is now governed by direct rule from Spain's central government. Madrid also disbanded Catalan's government and called for new regional elections on Dec. 21.

The AP has more:

"The early election is an attempt to find a democratic way out of the nation's worst crisis in nearly four decades. But the vote is shaping up as a plebiscite between those for and against independence, with polls predicting a close race between the two camps.

"Adding to the uncertainty, a Supreme Court judge decided Monday to uphold the preventive jailing of ousted Catalan vice president Oriol Junqueras, who tops the ticket for the left-republican ERC party.

"ERC was part of the former Catalan ruling coalition with Puigdemont's conservative party but is leading the polls before the new election.

"Junqueras and the other jailed politicians pledged last week to give up on efforts to seek unilateral independence for the wealthy northeastern region, in the hope of being freed.

"But judge Pablo Llarena said in his decision on Monday that it remains to be seen if Junqueras' pledge to abide by Spanish law is 'truthful and real.' "

The four men who remain in jail include Junqueras and Catalonia's former interior minister, the BBC reports, along with two grassroots pro-independence activists.

The six men released on bail are all former members of the Catalan regional government, including the ministers of justice, labor and culture, the broadcaster says.

As Protesters Clog Catalonia, Court Snuffs Out Declaration Of Independence

The imprisonment of these men was part of the dramatic reshaping of Catalan politics that unfolded in October.

On the first of the month, Catalonia held a referendum on splitting off from Spain. Madrid denounced the referendum as illegal and tried to block voters from casting ballots. Pro-unity Catalans largely stayed away from the polls. But the separatists persisted, and despite the fact that the region was divided on the question of independence, claimed that the pro-separatist referendum results were a mandate for claiming independence.

In Spain, Confusion And Uncertainty About Catalonia's Future

By mid-month, Puigdemont had delivered an ambiguous speech saying there was a "mandate" for independence, raising questions and creating confusion in both Barcelona and Madrid. But Spain's central government swore that if it was a declaration of independence, they'd respond assertively by claiming central control of the region.

And as October came to a close, both governments made it official. Catalan legislators formally declared independence, and Spain promptly dissolved that government, invoked direct rule — and arrested politicians who showed up for work.

But the roots of this conflict begin long before Oct. 1. Lauren Frayer, who has reported for NPR from Madrid and Barcelona, explains the history:

"After the end in 1975 of Gen. Francisco Franco's nearly four-decade dictatorship, during which some of Spain's disparate ethnic and national groups were repressed, the survival of the new Spanish democracy was thought to rest on the devolution of powers to the regions — reversing the centralized power of the dictator.

"The post-Franco 1978 Constitution recognized 17 autonomous regions, many of which, like Catalonia, have their own languages, cultures and traditions. The regions enjoy powers to set policy for many services, including health care and education, but rely on the central government for tax collection and redistribution of funds.

"The financial aspects of the arrangement have long been a central complaint by industrialized Catalonia. It is Spain's richest region and essentially subsidizes poorer parts of Spain. ...

"Catalan separatists have already set up a new tax agency to collect revenue if the region breaks away from Spain. But it's unclear whether independence would be a financial net gain for Catalonia, given the costs of border control, foreign relations and possibly the creation of a military — all of which are currently paid for by Madrid.

"Any new country of Catalonia would also be forced to leave the European Union, at least initially. It could continue to use the euro as its de facto currency, but it's unclear whether the new central bank it would have to create would be allowed to issue debt in euros."