Accessibility links
This Year's Hurricane Season Was Intense. Is It A Taste Of The Future? : The Two-Way Scientists say they see the fingerprint of climate change in these storms, but it's too soon to say whether this is a new normal. 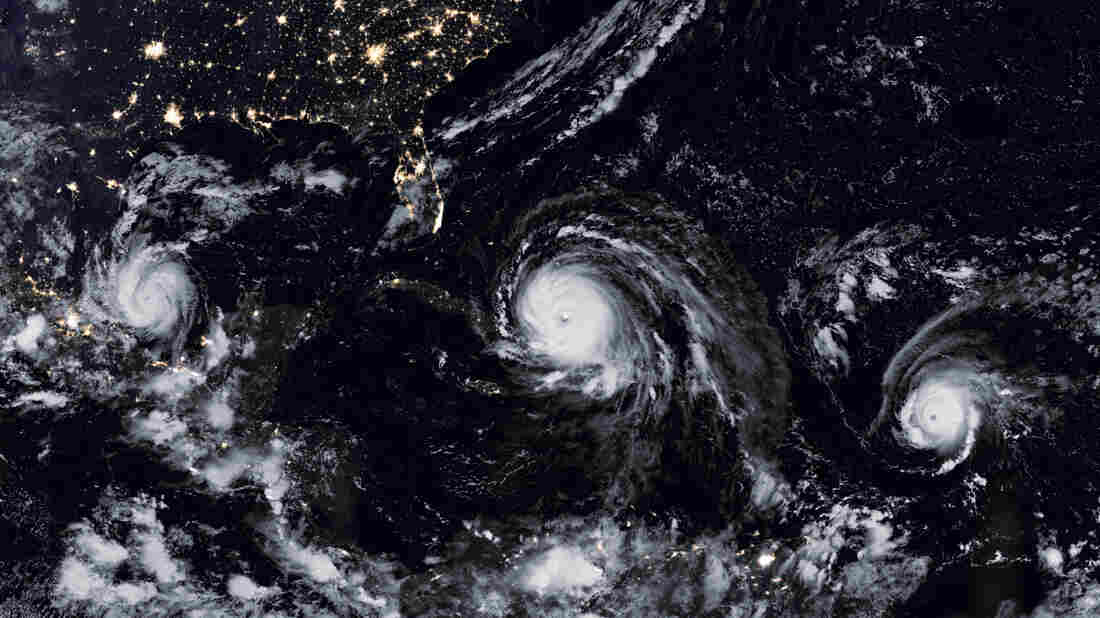 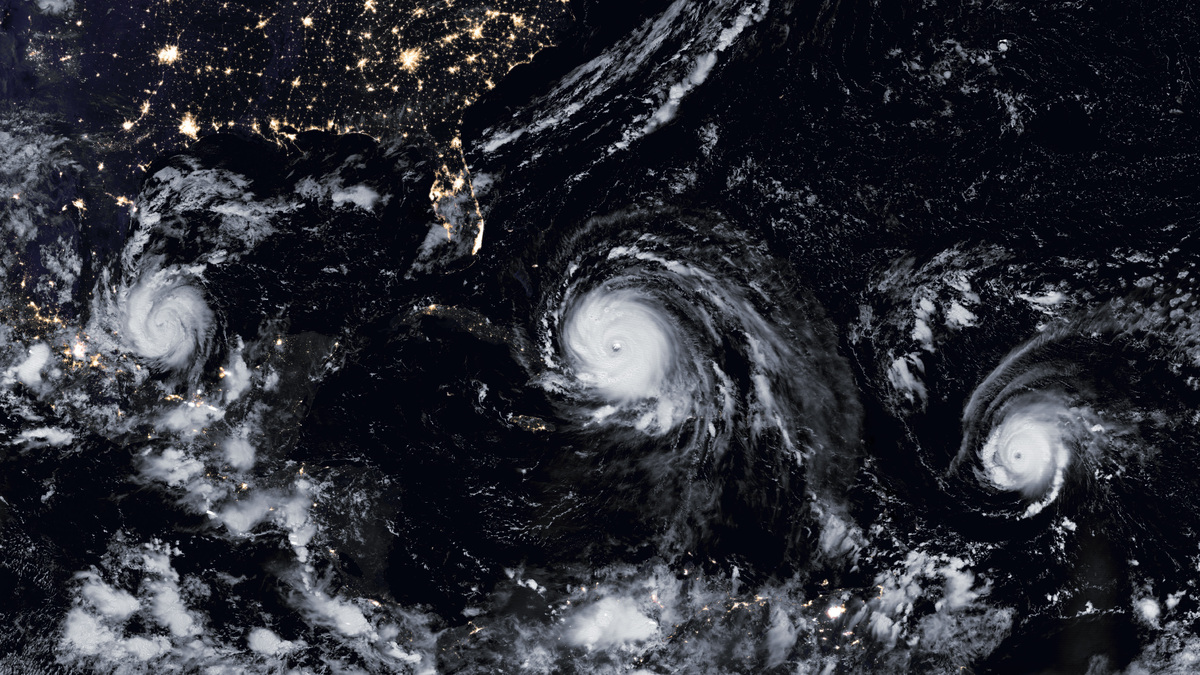 Satellite imagery of the Atlantic Ocean on Sept. 8, as three hurricanes (Katia, Irma, and Jose) are on the move.

With the 2017 Atlantic hurricane season finally over, scientists are taking stock of what they say was a monumental year.

A total of 10 hurricanes swept the region. Six were major storms of Category 3 or higher, and three of those were Category 4 or higher when they made landfall, spreading havoc from the Caribbean to Texas.

The Atlantic Ocean is vast and has always made its own weather. But a typical year sees about six hurricanes, not 10. And three strong hurricanes hitting land — Harvey, Irma and Maria — is extraordinary.

Meteorologist Kevin Trenberth at the National Center for Atmospheric Research says hurricanes feed off ocean heat. "Having high ocean heat content below the surface means that they can be sustained and remain stronger, more intense than they otherwise would," he says.

Climate change is playing a role. There were huge hurricanes and brutal seasons before climate change. But scientists now say the oceans are warmer; the tropical Atlantic and Gulf of Mexico were especially so this year. "So these storms were indeed exactly what we've been worrying about with respect to climate change," Trenberth says, "that the storms are bigger, long-lasting and more intense."

Bigger, as in three storms that hit as Category 4 or higher. More intense, because when you add up the level and duration of wind energy from the 10 hurricanes, the "accumulated cyclone energy" total is unusually high.

And longer lasting, as when Harvey hit Texas. Hurricanes normally wither on land. Harvey persisted, at least when it came to rainfall. It hovered for days, dropping record rain and recharging itself by extending spiral bands into the Gulf of Mexico like some airborne octopus.

Heavy rain is another sign of climate change. A warmer ocean means more water vapor rises into the atmosphere during the storms, which makes them wetter. Harvey's rains were the most intense in Texas history.

There are other factors at work besides warming. A global weather pattern called El Niño was absent this year, and that often means a stormier Atlantic Ocean. One reason is that high-altitude "shear winds" in the Atlantic that often nip the tops off budding hurricanes were absent, as well.

Atmospheric scientist Kerry Emanuel at MIT notes that there's also a rather mysterious cycle for Atlantic hurricanes. It seems to repeat about every decade. "We don't really understand it, [but] it's there," he says, and it also influences when and how often hurricanes arise. Sure enough, it was 12 years ago, in 2005, when the Atlantic saw such a similarly huge hurricane year.

Emanuel says scientists aren't clear whether hurricanes are becoming more common; reliable records for hurricanes go back only about 50 years in the Atlantic, so it's difficult to detect a long-term trend, and data for the Pacific are even scarcer. Theoretically, he says, some aspects of warming could actually decrease the frequency of hurricanes by drying out parts of the atmosphere. But those that do arise are likely to be nastier. "Insofar as the storms are intense and produce a lot of rain," he says, "they're a window into our long-term future."

And it's a costly future, Emanuel says. "We're just going to get more and more destruction," he predicts, "because we just encourage people to live and build in dangerous places" like low-lying coastlines — a fact independent of climate change.

In fact, some estimates now put the damages this year from hurricanes at well over $200 billion That's another record.