Accessibility links
U.S. Fugitive Eric Conn, Guilty In $550 Million Fraud, Is Captured In Honduras : The Two-Way Eric Conn had been under house arrest when he cut off his ankle monitor and left it in a backpack along I-75 in Kentucky. He was sentenced in absentia to 12 years in prison. 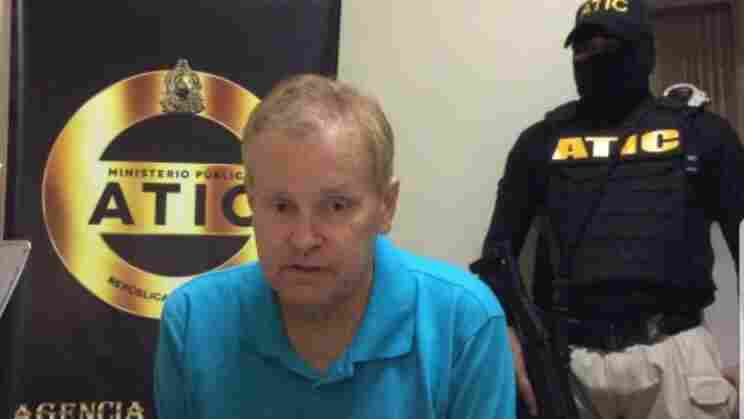 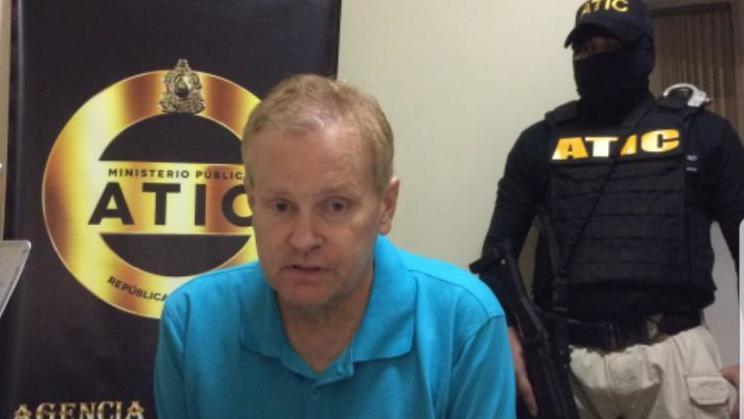 Eric Conn, who was sentenced in absentia to 12 years in prison after fleeing justice this summer, has been arrested in Honduras. He's seen here in a photo released by the Public Ministry of Honduras.

Eric Conn, the Kentucky lawyer who defrauded the Social Security system of more than half a billion dollars before fleeing the U.S. in June, has been arrested in Honduras, according to that country's Public Ministry. Wanted by the FBI, he also sent taunting messages while on the lam.

Conn had been under house arrest when he cut off his ankle monitor a month before his sentencing hearing and left it in a backpack along I-75 in Lexington, Ky. He was later traced to New Mexico, where a truck he had been using was found near the border. The FBI says the vehicle had been provided by a co-conspirator.

Conn eventually made it to Honduras, where agents of the Technical Agency for Criminal Investigation arrested him in the northern city La Ceiba, along the Caribbean coast. At the time, he was leaving a restaurant in a shopping center. Honduran officials say Conn is being sent back to the U.S. on Tuesday. 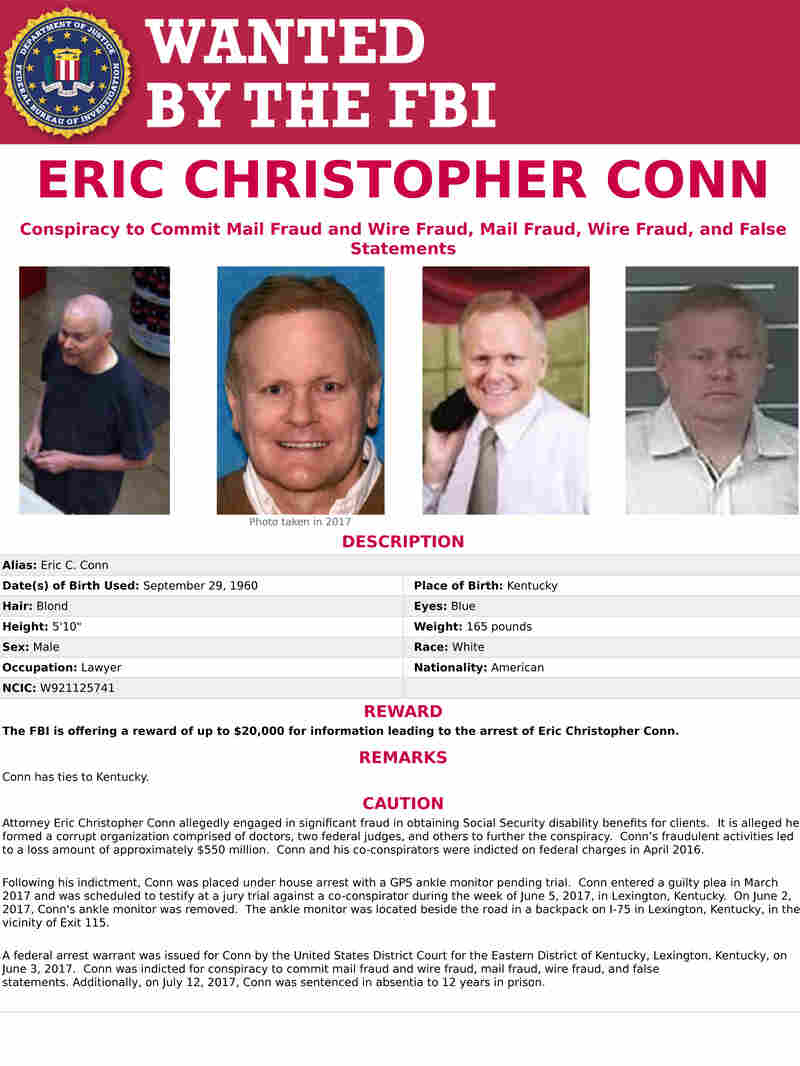 Eric C. Conn fled from house arrest in June, days before he was slated to testify against a co-conspirator in a massive fraud involving Social Security benefits. FBI hide caption 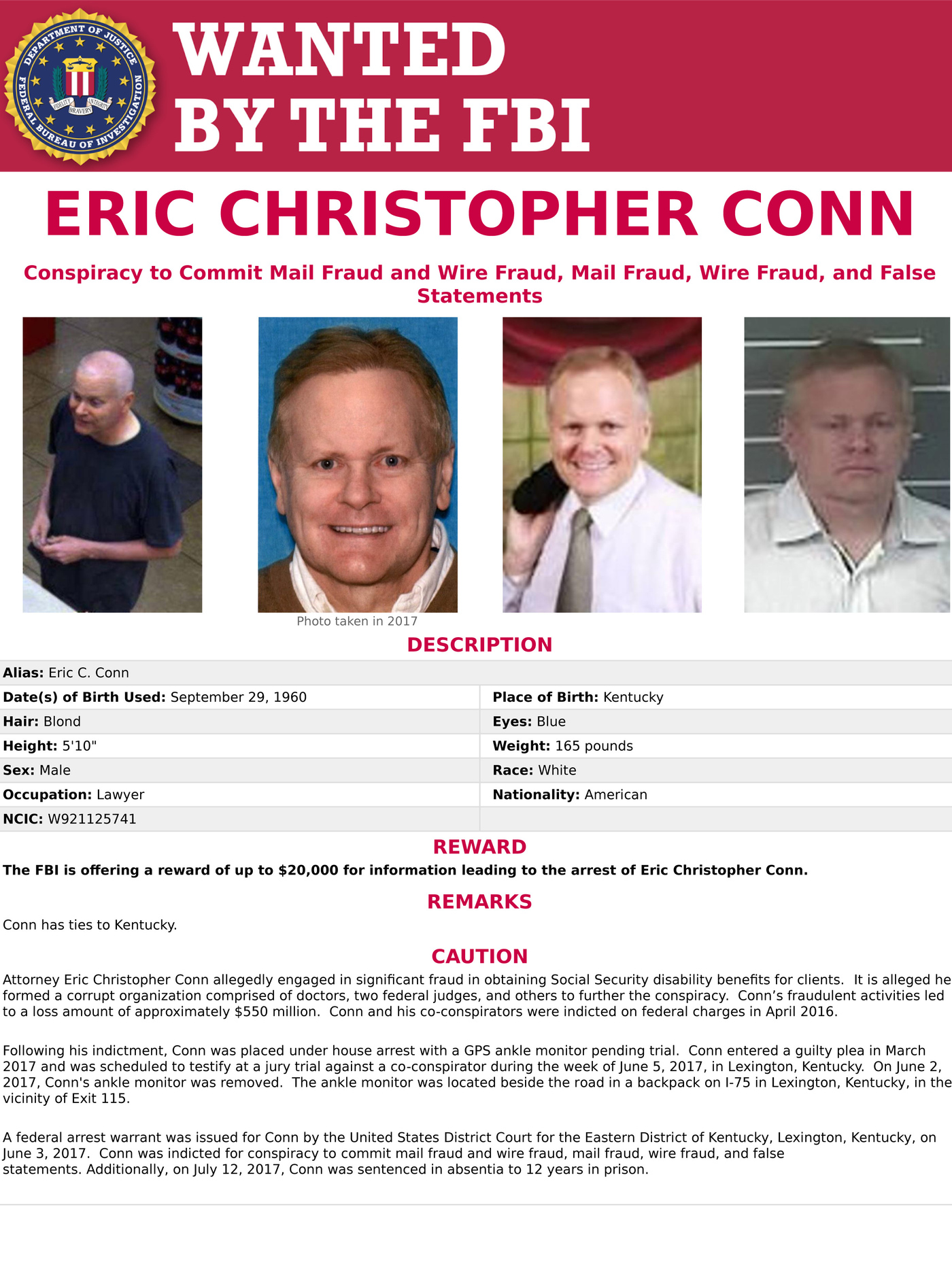 Eric C. Conn fled from house arrest in June, days before he was slated to testify against a co-conspirator in a massive fraud involving Social Security benefits.

Known as "the E-Man" in splashy ads and billboards, Conn once headed the largest Social Security law firm in Kentucky, promising to help clients get money from the government. But he was actually at the center of a corrupt group that included doctors, two federal administrative law judges and others who conspired to rig Social Security's disability benefit system, authorities said.

"The negative impact of Conn's presence in our community will be felt for generations," FBI Special Agent in Charge Amy S. Hess said this summer. "His flight from prosecution has diminished any legitimacy and integrity he once held as an attorney and officer of the court."

Members of the ring were indicted in April 2016 on federal charges that included conspiracy to commit mail fraud and wire fraud, mail fraud, wire fraud and making false statements. Conn entered a guilty plea in March 2017, agreeing to testify against others. But two months later, he disappeared.

After Conn fled, federal agents spotted him in surveillance video at a gas station and at a Walmart in New Mexico, where one image showed him pushing a bicycle.

From Louisville, Ky., member station WFPL, Eleanor Klibanoff reports that federal charges were recently lodged against Curtis Lee Wyatt, who allegedly "bought Conn a car, tested security protocols at the U.S.-Mexico border so Conn would know what to expect and helped him escape from house arrest."

Klibanoff adds, "The pair allegedly spent a year on the plan — twice as long as Conn managed to remain on the run."

Reporting on Conn after his flight from the law this summer, Klibanoff noted that he seems to have insisted on getting in touch with people in his home community. Here's a portion of the transcript from her story:

"KLIBANOFF: Bill Estep, a newspaper reporter with the Lexington Herald-Leader, started getting emails from Conn or someone who knew a lot about him. He said he'd fled to a country without an extradition treaty and provided details on his escape. Conn wanted to correct news stories, asked for unflattering mugshots to be taken down and demanded stricter sentences for his co-conspirators.

"ESTEP: I thought it was odd to — for someone who's supposedly on the run to reach out to a reporter that way. But the more I learned about him, the more I became convinced that fits with his personality.

On July 12, Conn was sentenced in absentia to 12 years in prison. A federal judge also ordered him to pay nearly $170 million in restitution, along with a $50,000 fine and a forfeiture judgment of $5,750,404. That figure of some $5.7 million represents money the Social Security Administration paid to Conn.

The case got its start in late 2011, when two Social Security Administration employees filed a whistleblower lawsuit against Conn and a federal judge, David B. Daugherty — who was sentenced to four years in prison in August, for accepting more than $600,000 in bribes from Conn.

Daugherty approved at least 3,149 disability cases filed by Conn, the Herald-Dispatch reports in Huntington, W.Va., where Daugherty heard disability appeals cases. The newspaper adds, "More than 1,700 have been deemed fraudulent by government investigators."

The Department of Justice joined the civil case against Conn and Daugherty in 2016. In a civil judgment earlier this year, Conn and his firm were ordered to pay $31 million to the government and the whistleblowers.