Accessibility links
Thomas Fire, Largest Of Southern California Wildfires, Erupts To 132,000 Acres : The Two-Way The death of a woman in a car crash in Ventura County is attributed to a fire. The Thomas Fire is still growing as it spreads into Santa Barbara County, northwest of Los Angeles. 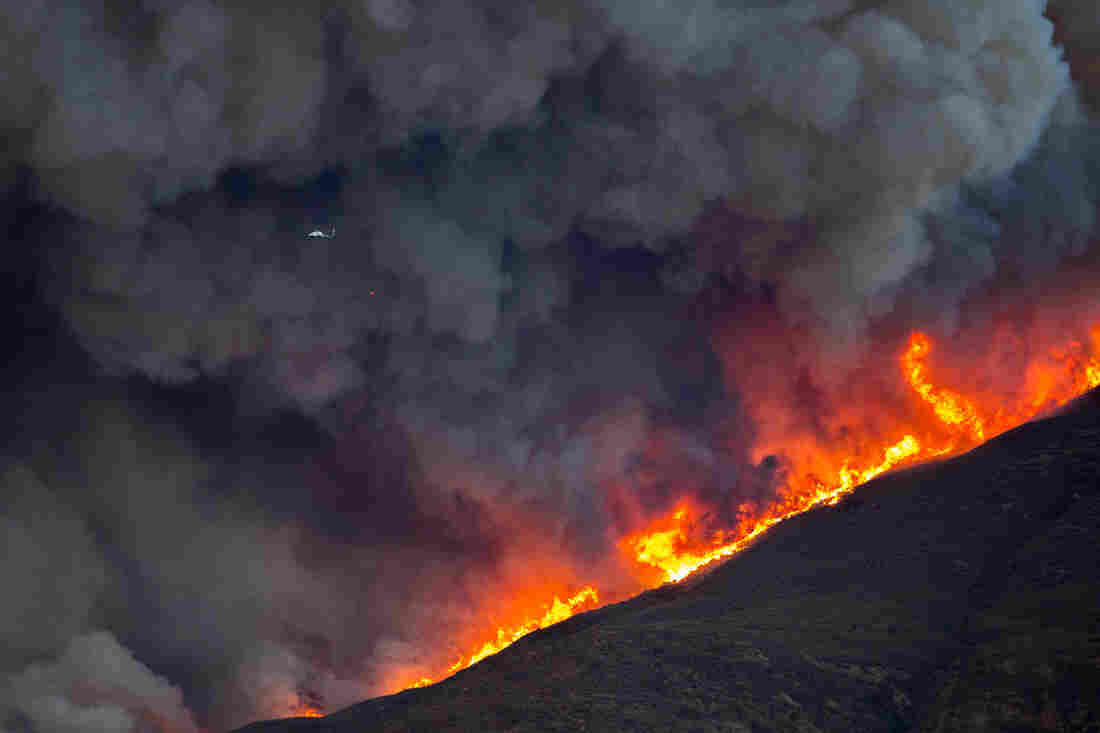 A firefighting helicopter is dwarfed by smoke and flames during Thomas Fire on Thursday. David McNew/Getty Images hide caption 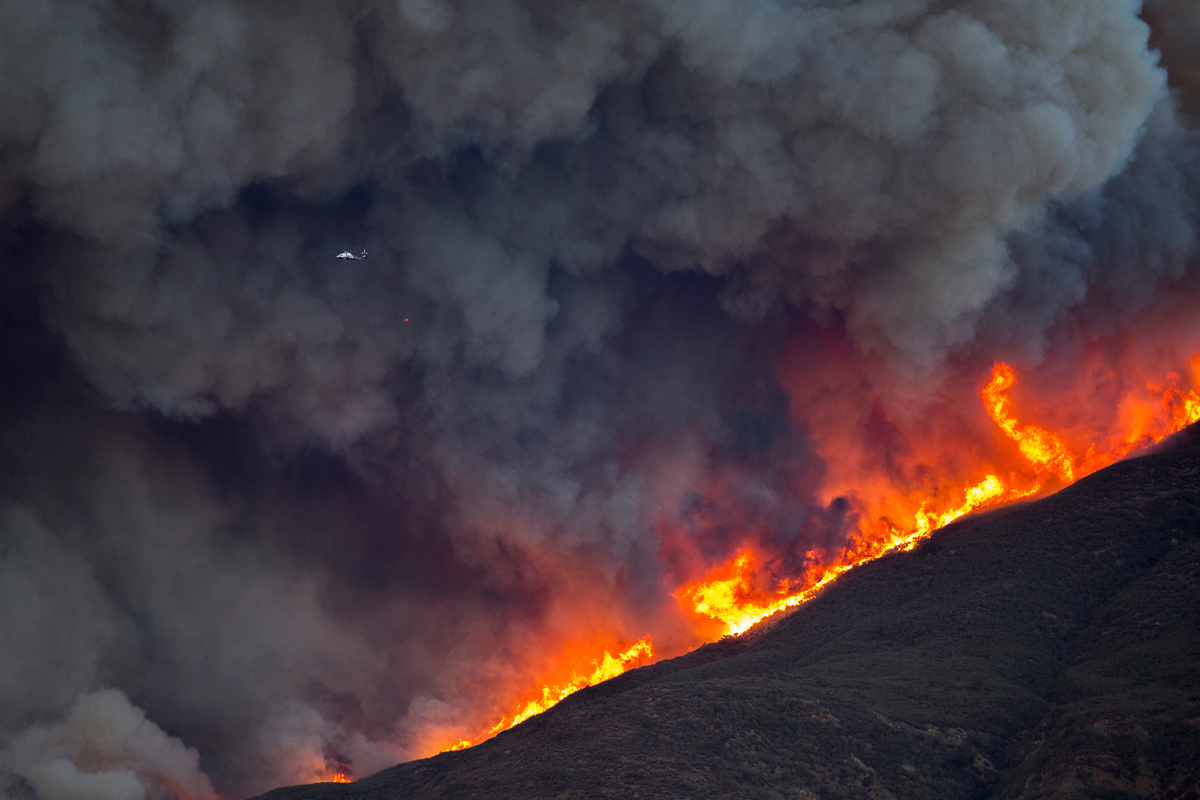 A firefighting helicopter is dwarfed by smoke and flames during Thomas Fire on Thursday.

A 70-year old woman found dead in her car Wednesday night along a fire evacuation route in Ventura County is the first human fatality caused by wildfires that have scorched Southern California this week. 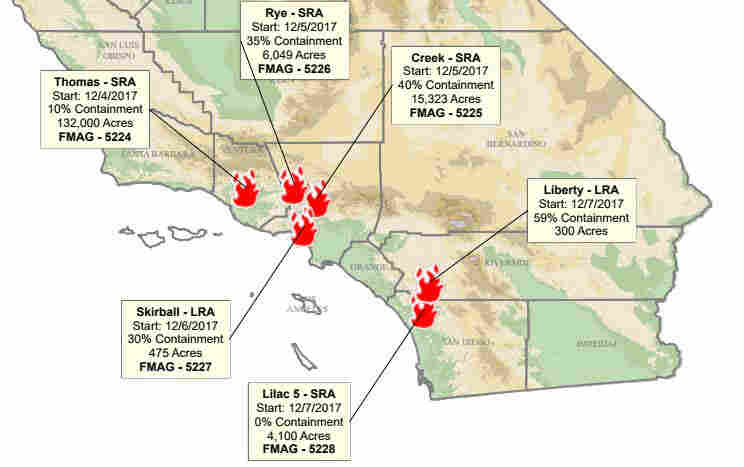 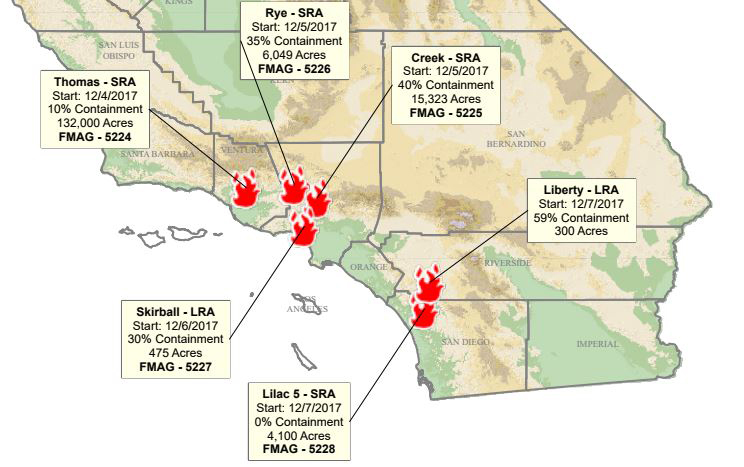 A map issued by the California Governor's Office of Emergency Services showed the locations of six active fires in Southern California on Friday.

Ventura is the site of the Thomas Fire, the largest of Southern California's volatile and intense blazes that started this week. It has grown to encompass 143,000 acres northwest of Los Angeles, officials reported Friday evening.

The region has six active wildfires, extending down into San Diego and Riverside counties.

Efforts to contain the blazes have been thwarted by high winds fanning the flames, authorities say. At least 439 homes and other buildings have been destroyed by the Thomas Fire, which is only 10 percent contained, officials said Thursday. More than 3,800 firefighters are battling that blaze and the number is expected to climb over 4,00.

Data & imagery of the California wildfires from our satellites, people in space and aircraft, not only give us a better view of the activity, but also help 1st responders plan their course of action. Get the details: https://t.co/BN9dmPiXep pic.twitter.com/82MQ3mU521

Gov. Jerry Brown has issued emergency declarations for Ventura, Los Angeles, San Diego and Santa Barbara counties and asked the White House for a presidential decree for federal assistance. That request was granted Friday, prompting Brown to welcome the quick approval from Washington. 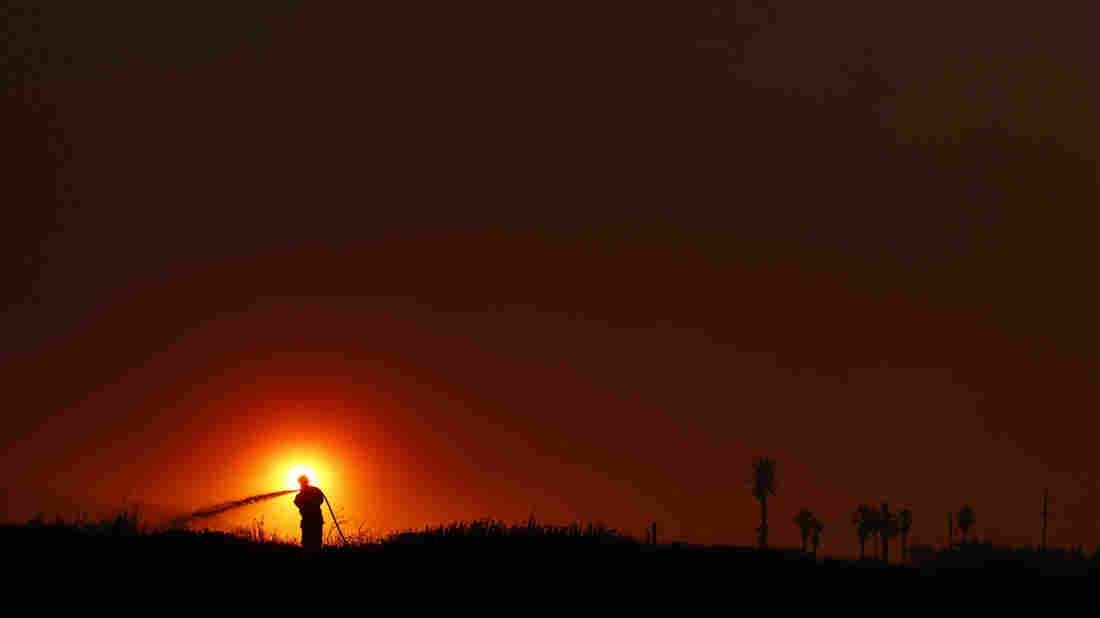 Firefighter Dan Whelan is silhouetted against the sun as he battles a wildfire burning near Faria State Beach in Ventura, Calif., on Thursday. Jae C. Hong/AP hide caption 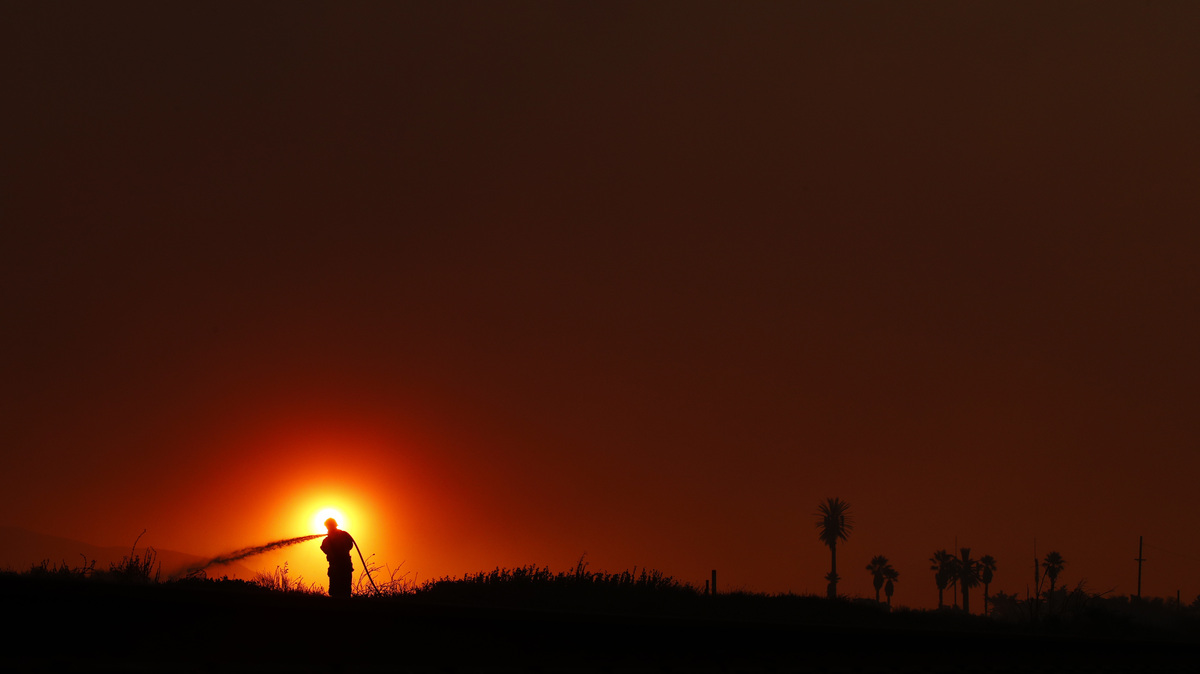 Firefighter Dan Whelan is silhouetted against the sun as he battles a wildfire burning near Faria State Beach in Ventura, Calif., on Thursday.

Four people, including one firefighter, have been hospitalized with smoke inhalation, authorities said, according to The Los Angeles Times. Thousands have been placed under mandatory evacuation orders.

"We drove through a wall of flames," Wendy Frank told The Associated Press, describing her ordeal after evacuating her horses from Ojai on Wednesday night. "I didn't know if we'd make it. I just put the accelerator down."

California Wildfires: Tell Us Your Story

The Thomas Fire started Monday, followed by the Rye and Creek fires a day later. The Skirball Fire broke out Wednesday, while the Liberty and Lilac fires erupted Thursday. Officials say the fires' explosive growth is due to strong Santa Ana winds and extremely dry conditions.

"The Santa Ana winds are predicted to ease," Lance Orozco of member station KCLU in Thousand Oaks reports, "but weather forecasters also brought some bad news. Instead of tapering off [Friday], we will see wind, and heightened fire conditions, through Sunday night."

The Lilac Fire has scorched 4,100 acres in San Diego County, destroying 65 structures and threatening 5,000 more. It has moved rapidly to the west, authorities say, and it could soon burn a corridor all the way to the ocean.

Alison St. John of member station KPBS says the front line of the Lilac Fire is at the northern edge of San Diego's urban area, and it is burning in the direction of the Camp Pendleton Marine Base.

"Cal Fire is exercising its agreement with the military to use its helicopters for the firefighting operations," Alison says.

Cal Fire Division Chief Nick Schuler told reporters Thursday evening that "people need to be ready because this fire could make it all the way through Oceanside to the coast if it continues."

"There are horses running all loose down here," Sise said. "People have lost horses. Barns have burned down. It just happened so fast that [we] had to do something."

An estimated 25 horses died in fire at that site.

Although winds were not quite as strong as forecast earlier, they have still been a major factor in both spreading the fire and making it difficult to fight, says Tom Kruschke, a spokesman for the Ventura County Fire Department.

As of midday Friday, red flag warnings for critical fire weather conditions applied to an area starting at the U.S.-Mexico border and going more than 150 miles up the coastline, past San Diego and stopping above Santa Barbara, with Los Angeles and its related communities caught in the middle, according to the National Weather Service.

Red alerts from regional NWS offices were also in effect for large swaths of inland areas, covering Phoenix eastward and regions near Las Vegas to the north. The Phoenix office said its warning will remain in effect through 8 p.m. Sunday for inland areas.