Accessibility links
At Least 14 U.N. Peacekeepers Killed In Rebel Attack In Congo : The Two-Way Five Congolese soldiers also died, and dozens of peacekeepers were wounded, in the attack on a base in eastern Congo. A U.N. official said it was the bloodiest assault on peacekeepers in 25 years. 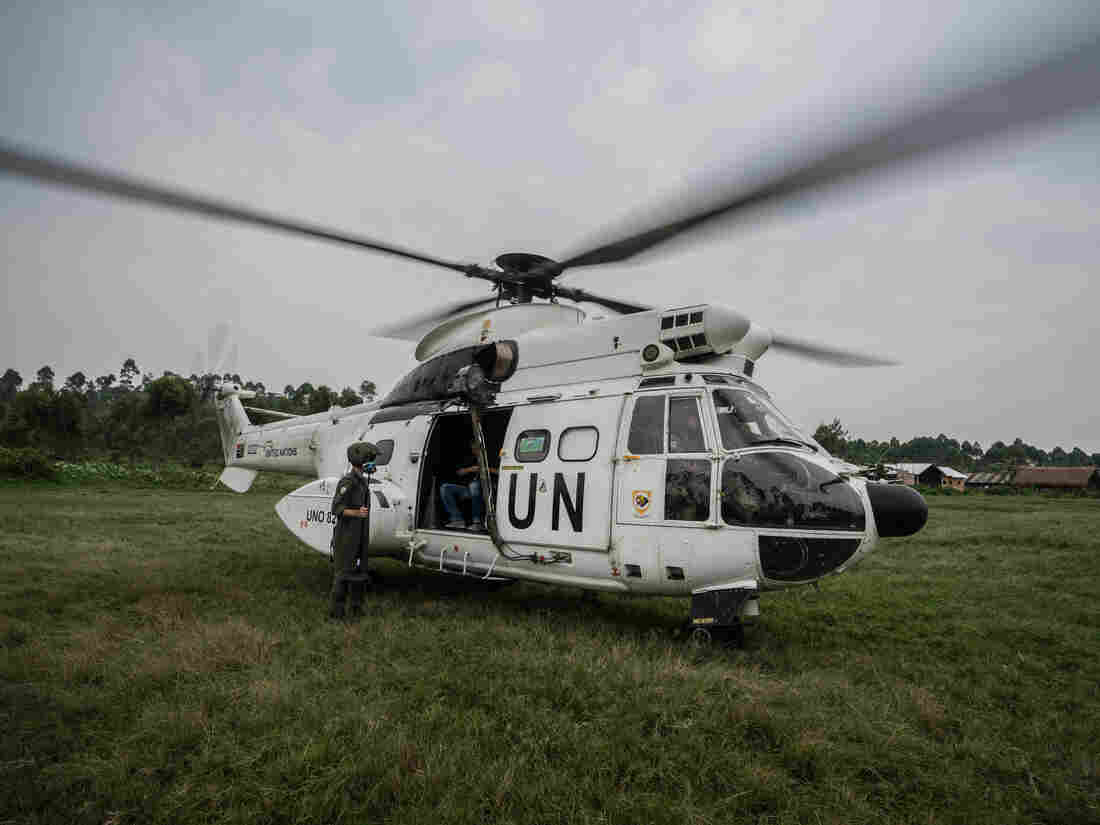 The U.N. has operated in the Democratic Republic of the Congo for years. Thursday evening's attack was the bloodiest assault on peacekeeping forces in recent memory, according to a U.N. official. Giles Clarke/Getty Images hide caption The U.N. has operated in the Democratic Republic of the Congo for years. Thursday evening's attack was the bloodiest assault on peacekeeping forces in recent memory, according to a U.N. official.

At least 14 U.N. peacekeepers were killed when rebels attacked a peacekeeping base in a remote area of the Democratic Republic of the Congo on Thursday. Five Congolese soldiers also died and at least 40 peacekeepers were wounded in the three-hour firefight.

"This is the worst attack on U.N. peacekeepers in the organization's recent history," U.N. Secretary-General António Guterres said in a statement Friday.

At dusk Thursday, rebels attacked the forward operating base some 40 miles outside the town of Beni, according to U.N. officials. A Ugandan-based rebel group known as the Allied Democratic Forces is suspected of carrying out the assault, which occurred in a mineral-rich area in North Kivu province that has long been plagued by conflict.

The 14 peacekeepers killed were from Tanzania, the director of U.N. operations and crisis center, Ian Sinclair, said in a briefing Friday. Three other peacekeepers were missing.

Guterres, who earlier had put the death toll at 12, said military reinforcements had arrived at the base and that medical evacuations were ongoing.

"I condemn this attack unequivocally," Guterres said. "These deliberate attacks against U.N. peacekeepers are unacceptable and constitute a war crime. I call on the DRC authorities to investigate this incident and swiftly bring the perpetrators to justice. There must be no impunity for such assaults, here or anywhere else."

Thursday's attack was the third in the area in recent months, according to Sinclair. He said it wasn't clear how many attackers were involved.

In a statement, the head of the U.N. mission in the Democratic Republic of Congo, Maman Sidikou, said:

"I wish to convey my sincere condolences to the families and loved ones of peacekeepers and FARDC [Armed Forces of the Democratic Republic of the Congo] soldiers who lost their lives, or were injured in the service of peace in the Democratic Republic of the Congo in the last hours. I condemn in the strongest terms this deadly attack on United Nations peacekeepers and the FARDC."

The Associated Press reports that "nearly 300 peacekeepers have been killed since the U.N. mission arrived in Congo in 1999, according to peacekeeping data."

The Central African nation was dubbed "Africa's World War" in the 1990s, NPR's Michele Kelemen notes. "There were rebel groups from all sorts of countries that were involved in this conflict," she says.

While the U.N. mission has become more robust at pushing back rebel groups, Michele says the Congo has always been a dangerous place.

This is a breaking news story. As often happens in situations like these, some information reported early may turn out to be inaccurate. We'll move quickly to correct the record and we'll point only to the best information we have at the time.