Accessibility links
Simeon Booker, Dean Of Washington's Black Press Corps, Dies At 99 : The Two-Way Booker chronicled the civil rights movement, and is credited with helping to deliver the 1955 story of Emmitt Till's murder to a national audience. 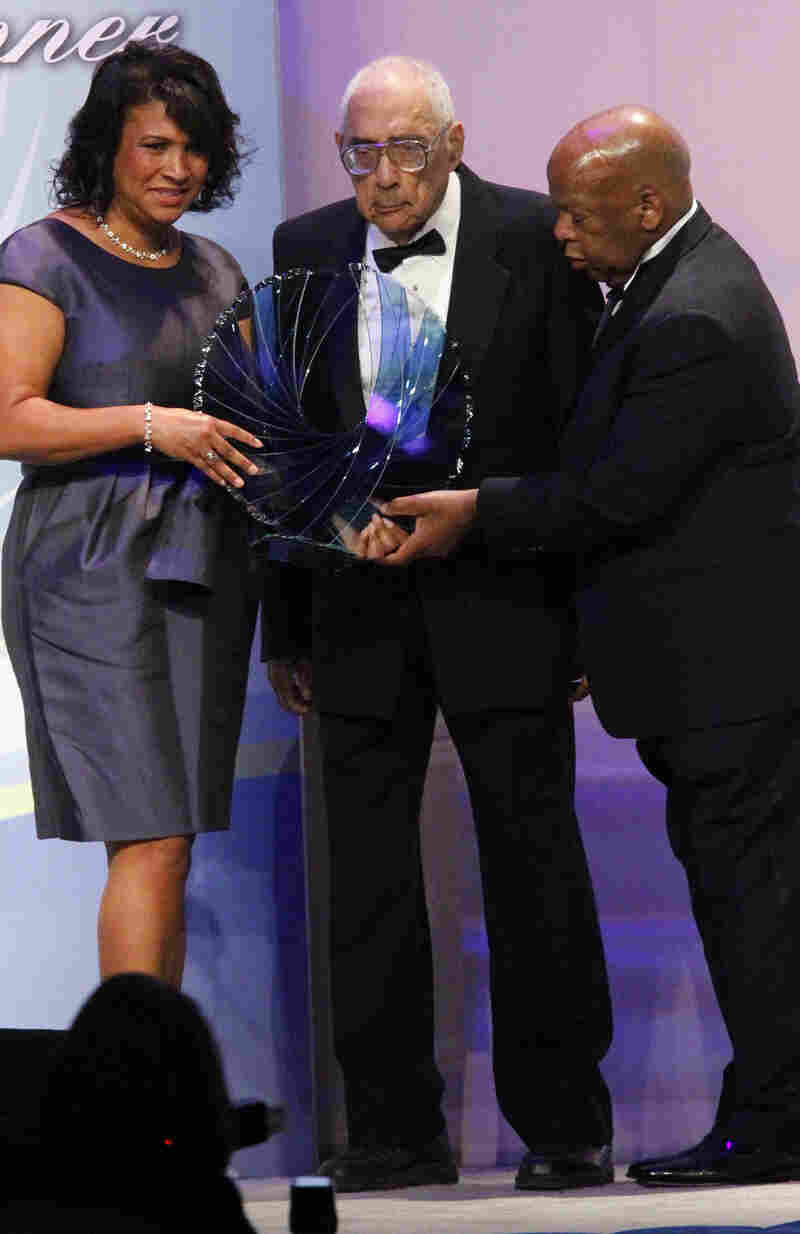 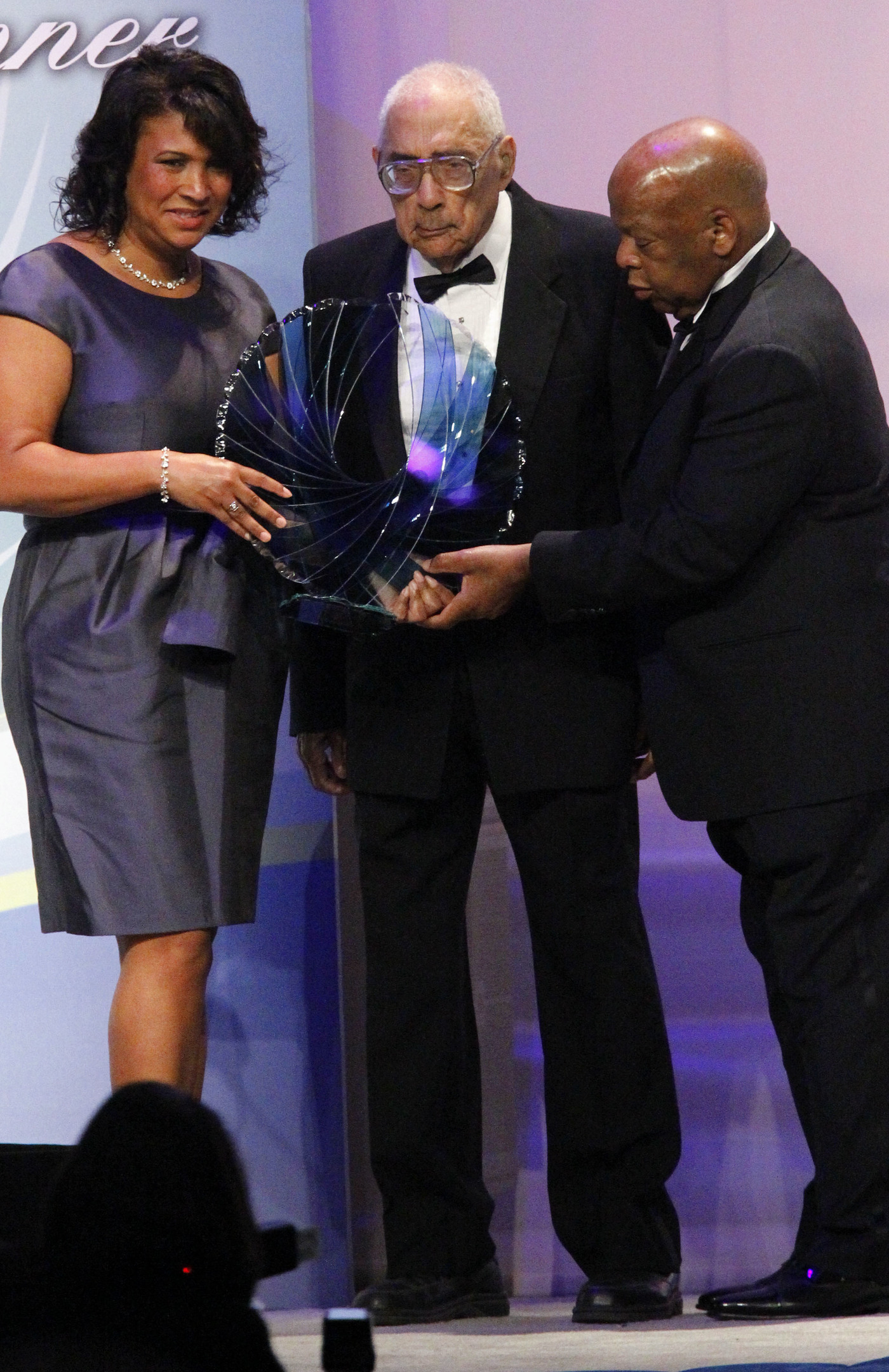 Simeon Booker, the Washington bureau chief of Jet and Ebony magazines for five decades, died Dec. 10 at an assisted-living community in Solomons, Md., according to The Washington Post. He was 99 and had recently been hospitalized for pneumonia, his wife, Carol Booker, told the paper.

Booker was the first full-time black reporter for The Post. The paper says "few reporters risked more to chronicle the civil rights movement than Mr. Booker."

Booker is credited with helping to deliver the story of Emmitt Till's murder to a national audience. In 1955, the boy from Chicago was tortured, and shot and killed while visiting relatives in Mississippi. He was accused of having whistled at a white woman.

Jet magazine published the photos of Till in the open casket. In 2013, NPR's Michel Martin asked Booker how difficult a decision it was for the magazine to go forward with those photographs.

"That was a very difficult decision for them because I don't think they were in it, and they didn't realize the seriousness of it. But going down there and seeing all the turmoil, I knew what was coming up," Booker said.

About Booker's coverage of Till's funeral, The Washington Post reports:

"Mr. Booker instinctively went to the home of the young man's mother, Mamie Till-Mobley, and earned her trust as she moved through her terror and then grief. He was with her at the funeral home where, over the objections of everyone present, she insisted that the casket bearing her son's mutilated corpse be opened.

"Mr. Booker described the scene in Jet: "Her face wet with tears, she leaned over the body, just removed from a rubber bag in a Chicago funeral home, and cried out, 'Darling, you have not died in vain. Your life has been sacrificed for something.' "

"A Jet photographer, David Jackson, photographed Till's body, which thousands of mourners observed at his funeral. No mainstream news outlets published the images of Till's body, according to an account decades later in The New York Times. But their appearance in Jet and several other African-American publications helped make the Till murder "the first great media event of the civil rights movement," historian David Halberstam wrote in his book The Fifties."

In 2013, Booker and his wife Carol McCabe Booker released the memoir Shocking the Conscience. In it, he described one of his first trips to the South: "Mississippi in 1955 was like nothing I had ever seen. What I witnessed there was not only raw hatred, but state-condoned terror. I quickly learned that you could be whipped or even lynched for failing to get off the sidewalk, approaching a white person."

NPR's Michel Martin asked him what he remembers most vividly when he looks back on that time.

"Well, the most vivid signs of that period, for me, was that I was a Northerner," Booker said. "And when I went into journalism and went South, then I saw a part of America I'd never seen before, I knew nothing about. I just couldn't believe that a race of people could be just set aside; told you couldn't work here, couldn't live there, couldn't eat this - couldn't eat there. It just was so hard on me. I just revolted and said well, I'm going to change this because this wasn't the way people live, and this isn't the way countries ought to be."

Booker covered 10 U.S. presidents. He told Martin that his favorite was John F. Kennedy. "He put me in his pool. First black ever in a newsman pool, in the White House. He was the one, and when he was killed, that was a — oh, that was a sad day for me."