Accessibility links
France Moves To Ban Students From Using Cellphones In Schools : The Two-Way The country's education minister says the strict rules are a matter of public health. But some teachers and parents call it a losing battle. 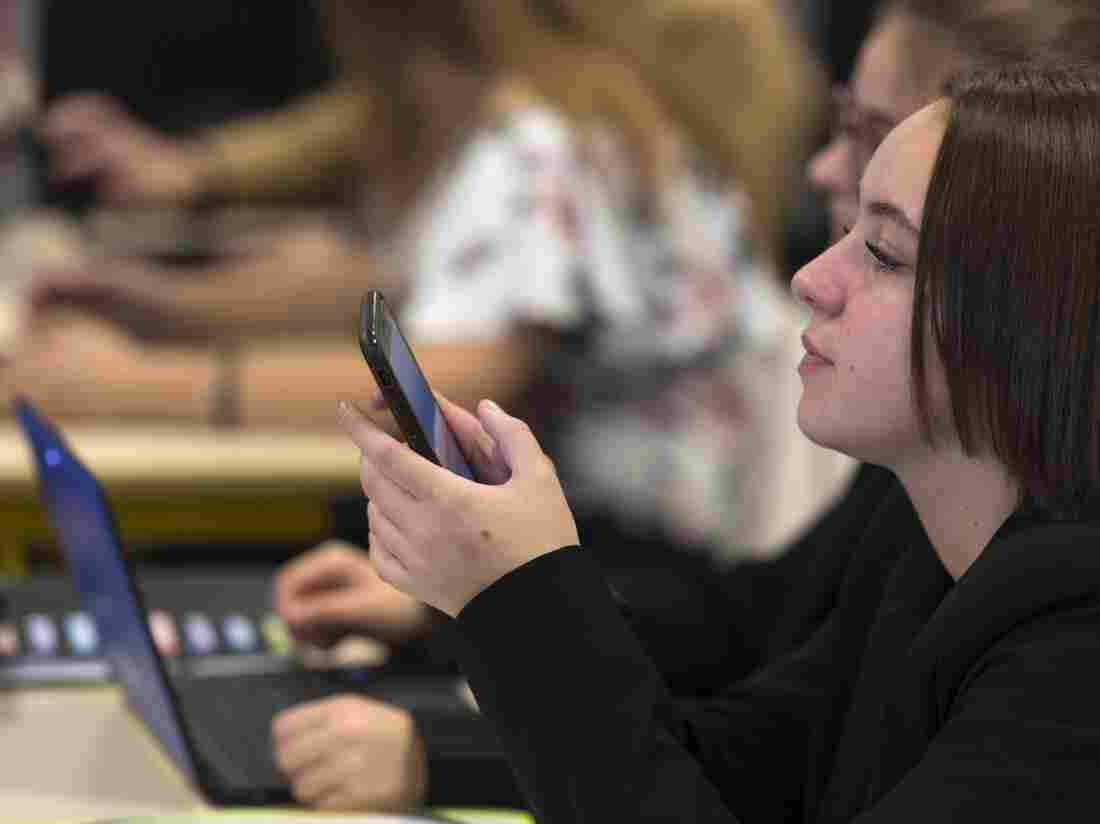 High school students use smartphones and laptops at a vocational school in Bischwiller, France, in September. The country's education minister said he will tighten the ban on phones for elementary and secondary school students, except for educational purposes and emergencies. Patrick Hertzog/AFP/Getty Images hide caption 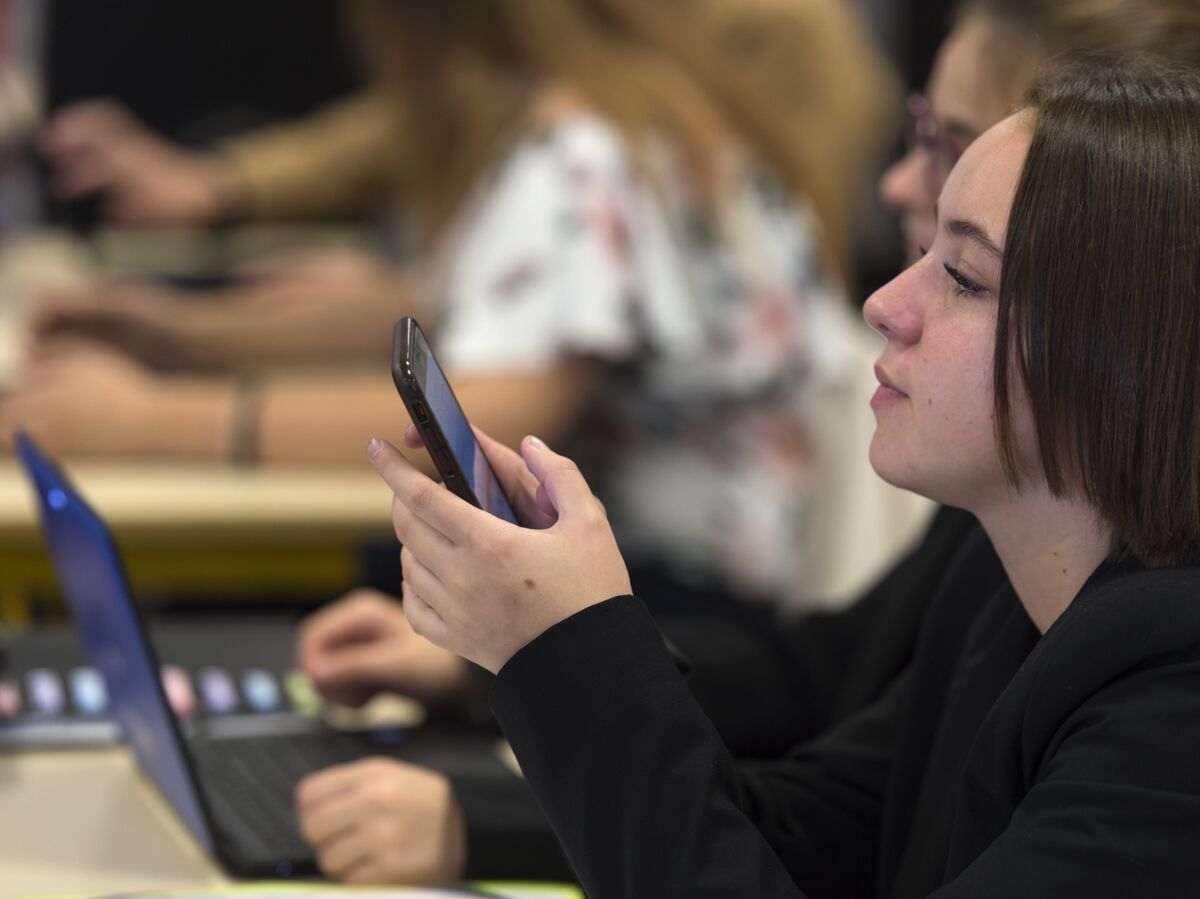 High school students use smartphones and laptops at a vocational school in Bischwiller, France, in September. The country's education minister said he will tighten the ban on phones for elementary and secondary school students, except for educational purposes and emergencies.

France's education chief says that when students go back to school next fall, all mobile phone use will be banned in schools for students roughly 15 and younger.

"These days the children don't play at break time anymore; they are just all in front of their smartphones, and from an educational point of view, that's a problem," Education Minister Jean-Michel Blanquer said, according to The Telegraph.

"We are working on this issue, and it can take different forms," Blanquer said. "You may need a mobile phone, for example for educational purposes, for emergency situations" so perhaps the phones can be confined to lockers.

The French educational code has banned using phones in class in elementary schools and secondary schools since 2010. As a result, phones are supposed to be kept in students' backpacks.

But apparently that's not what happens.

"It is extremely difficult to get respect," Valerie Sipahimalani, teacher and deputy secretary general of the national union of secondary school teachers, told Le Monde.

The stricter rules will mean that students can't look at their phones during lunch or between classes, the Telegraph reports.

Calling it a "subject of fundamental society" and an issue of public health, Blanquer pointed to studies that warn against screen time for children under the age of 7. The school cellphone ban was a campaign promise of President Emmanuel Macron.

Le Monde reports that in recent years, the number of young French people carrying cellphones has increased dramatically. More than 8 in 10 adolescents in France were equipped with smartphones in 2015, compared with 2 in 10 in 2011. The newspaper notes that many students begin carrying phones at age 9, when they start going to school alone.

"It's about enforcing the rules and the law. The use of telephones is forbidden in class," Blanquer said in September, according to Le Figaro. "With principals, teachers and parents, we need to find ways to protect our students from the dispersion of screens and phones. In the Council of Ministers, we put our cellphones in lockers before we meet. It seems to me that this is feasible for any human group, including a class."

Blanquer pointed to existing systems at many schools, whereby students put their phones in a box when they enter the classroom.

"A box on a table at the entrance of my class awaits the phones," one teacher told Le Figaro. "I never had problems. And it takes two minutes at the beginning of each hour."

But other teachers described a losing battle.

"The students are addicted to their phone, it's a real plague," Xavier Bessière, teacher of maritime law at a vocational school told Le Monde. "We close our eyes, that's for sure, because we cannot fight. We would be the gendarme all the time."

PEEP, a French parents' association, called the ban a "a horrendous logistical problem," according to Le Parisien.

Monks For A Month: College Kids Give Up Talking — And Technology

"Let's imagine an establishment of 500 students: Where will we store the phones and how to ensure that each student will find his smartphone at the end of the course?" Gerard Pommier, the group's president, told the newspaper, adding that he feared more classroom tensions under a stricter ban.

Then-New York City Mayor Michael Bloomberg began enforcing a similar ban in that city's schools in 2006. But current Mayor Bill de Blasio rolled it back in 2015. The ban was unpopular with parents who wanted to be able to contact their kids, The New York Times reported, and it was unevenly enforced: Schools with metal detectors had the strictest enforcement.

As France tries to tighten its policy, its schools will likely encounter similar issues and resistance from parents.

"You have to live with your time," PEEP's former president, Valérie Marty, told L'Express in March. Especially, she said, because "the adults themselves are not always exemplary with their phones."

An earlier version of this story incorrectly referred to French President Emmanuel Macron as prime minister.