Accessibility links
California's Thomas Fire 30 Percent Contained : The Two-Way The wildfire has burned through 238,500 acres and destroyed more than 700 homes. It's been burning for more than a week and is one of the largest and most destructive fires in state history. 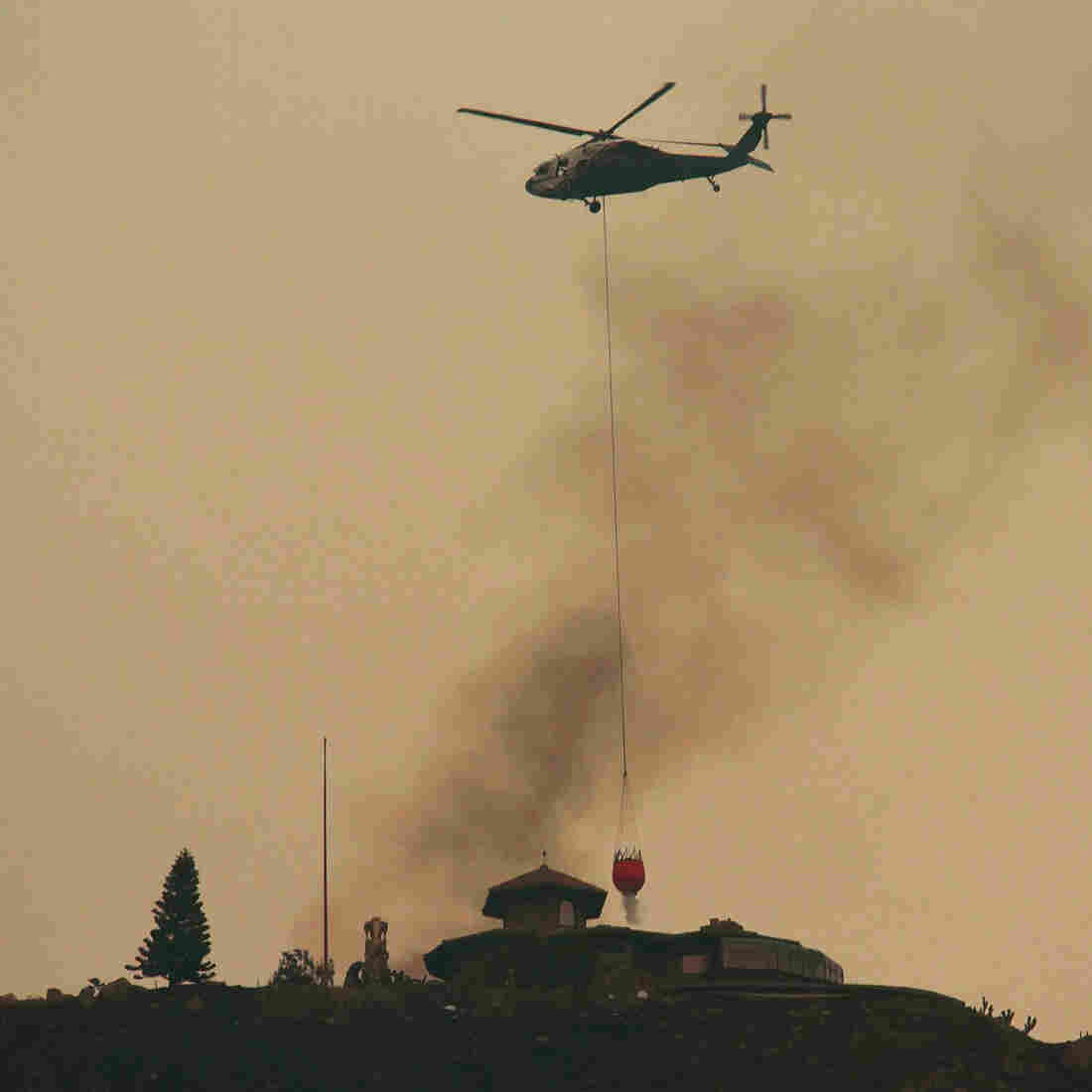 In this photo provided by the Santa Barbara County Fire Department, a helicopter makes a water drop near a house that was not on fire on a hill above Bella Vista Drive in Montecito, Calif. Mike Eliason/AP hide caption 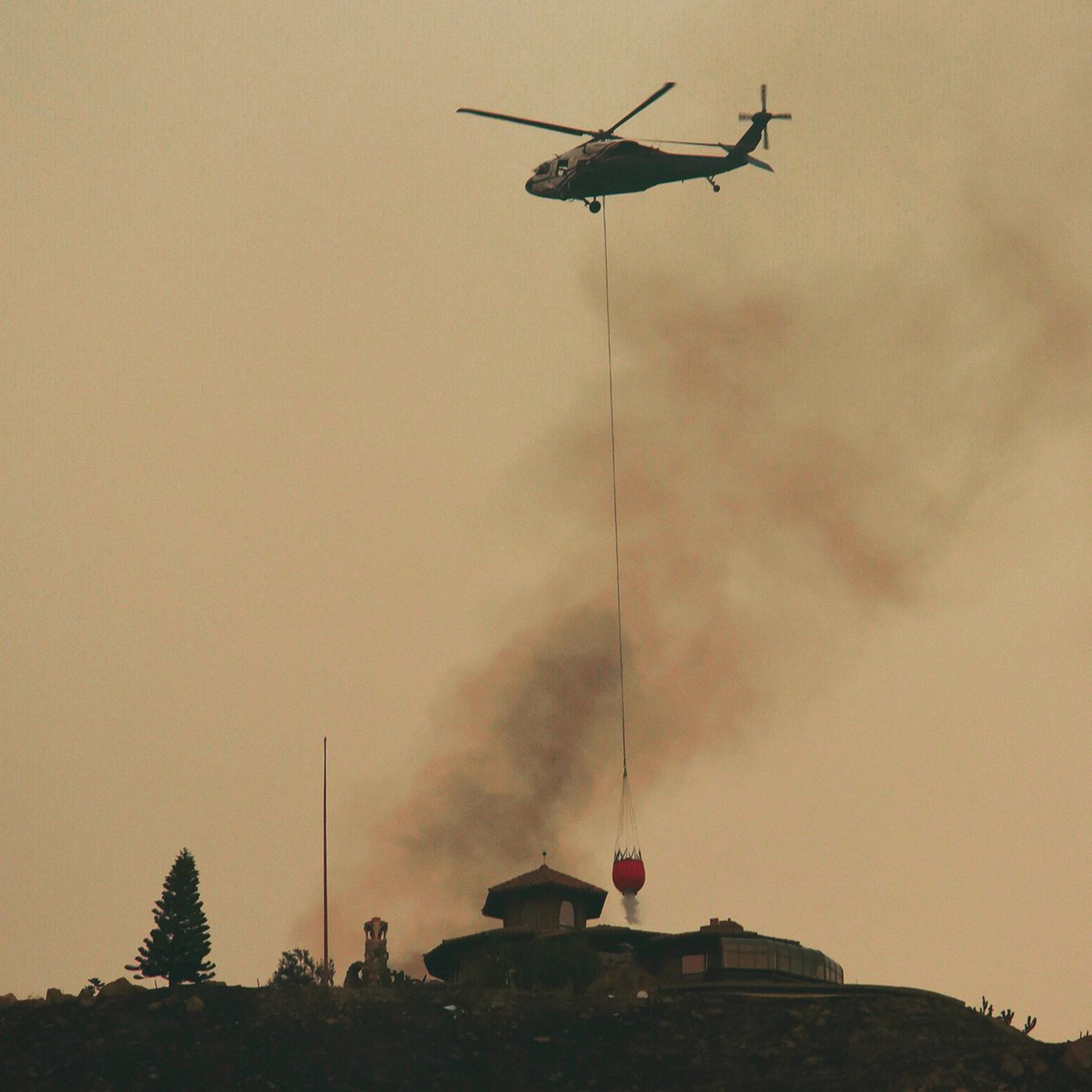 In this photo provided by the Santa Barbara County Fire Department, a helicopter makes a water drop near a house that was not on fire on a hill above Bella Vista Drive in Montecito, Calif.

The fire that has been raging for 10 days in southern California – one of the largest and most destructive in the state's history — is being gradually contained, firefighters say, but there's still a long way to go.

The Thomas Fire, which is straddling Santa Barbara and Ventura counties, has burned through 238,500 acres and is, as of late Wednesday, considered 30 percent contained, according to Calfire. That is up from 25 percent containment on Tuesday.

Even so, thousands of homes are still in danger and tens of thousands of evacuees are still waiting to return home – if they still have homes. The fire has destroyed 921 structures, including more than 700 single-family homes, according to official figures. Another 18,000 structures are considered threatened.

In its progress report, CalFire said the overnight fight against the fire remains treacherous.

"Gusty north to northeast winds will continue to battle with terrain driven winds. In the evening, the offshore flow will prevail and strengthen, as it has each night, amplifying fire activity."

More than 8,000 firefighters are trying to stop the fire which has caused an estimated $68.7 million in damages.

Some residents have been allowed back in their homes after mandatory evacuations.

Although there are signs of progress, the wind is still erratic and the moisture in drought-parched California is helping fuel the fire.

"We need the weather to shift. We need the moist air. We're only about a mile from the ocean, and to be this dry, this close to the ocean is an anomaly," battalion chief Ron Mclaughlin in Carpinteria, tells NPR Leila Fadel.

Leila reports from Montecito: "Schools are closed, finals at the University of California Santa Barbara have been rescheduled and people are walking around in areas that haven't been evacuated with surgical masks to protect themselves from the smoke."

"Huge flames lit up the mountains above Summerland and Montecito. Firefighters spent much of the day trying to build fire breaks to help stop the flames from moving down from the mountains to the homes below," according to member station KCLU.

KPCC in Pasadena, another NPR member station, "The cause of the Thomas Fire and several other Southern California wildfires remain under investigation, but electric utility SoCal Edison said in a Monday release that it believes the investigations by state officials "include the possible role of its facilities" and that they now include locations beyond those previously identified as the apparent origin of the fires."

"Elsewhere, fire officials announced that a cooking fire at a homeless encampment sparked a blaze last week that destroyed six homes in the Bel Air neighborhood of Los Angeles.

Arson investigators determined that the so-called Skirball fire near the world-famous Getty museum was started by an illegal fire at a camp near a freeway underpass, city fire Capt. Erik Scott said."

According to the Los Angeles Times: "Investigators said the fire had not been set deliberately and they have not found any of the people who lived there. The camp — one of scores of makeshift communities that have grown along freeways, rivers and open space across Los Angeles — was largely destroyed in the fire, leaving authorities with little evidence."