Accessibility links
Martial Law Extended For Another Year In Southern Philippines : The Two-Way The move to keep martial law in the Muslim-dominated south was requested by President Rodrigo Duterte. The decree is worrisome to many Filipinos who remember a deadly era of martial law in the 1970s.

Martial Law Extended For Another Year In Southern Philippines

Martial Law Extended For Another Year In Southern Philippines 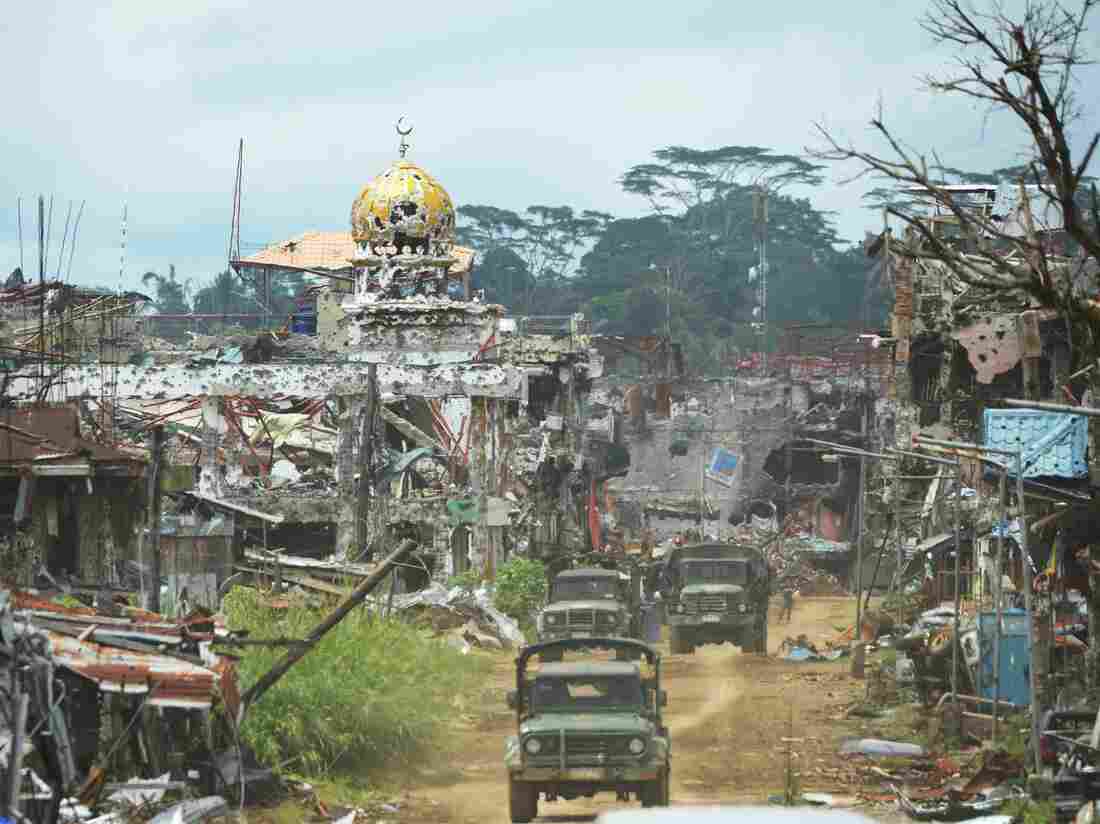 Military trucks drive past destroyed buildings and a mosque in what had been the center of fighting in Marawi on the southern Philippine island of Mindanao on Oct. 25, days after the military declared that the battle against ISIS-linked militants was over. Ted Aljibe/AFP/Getty Images hide caption 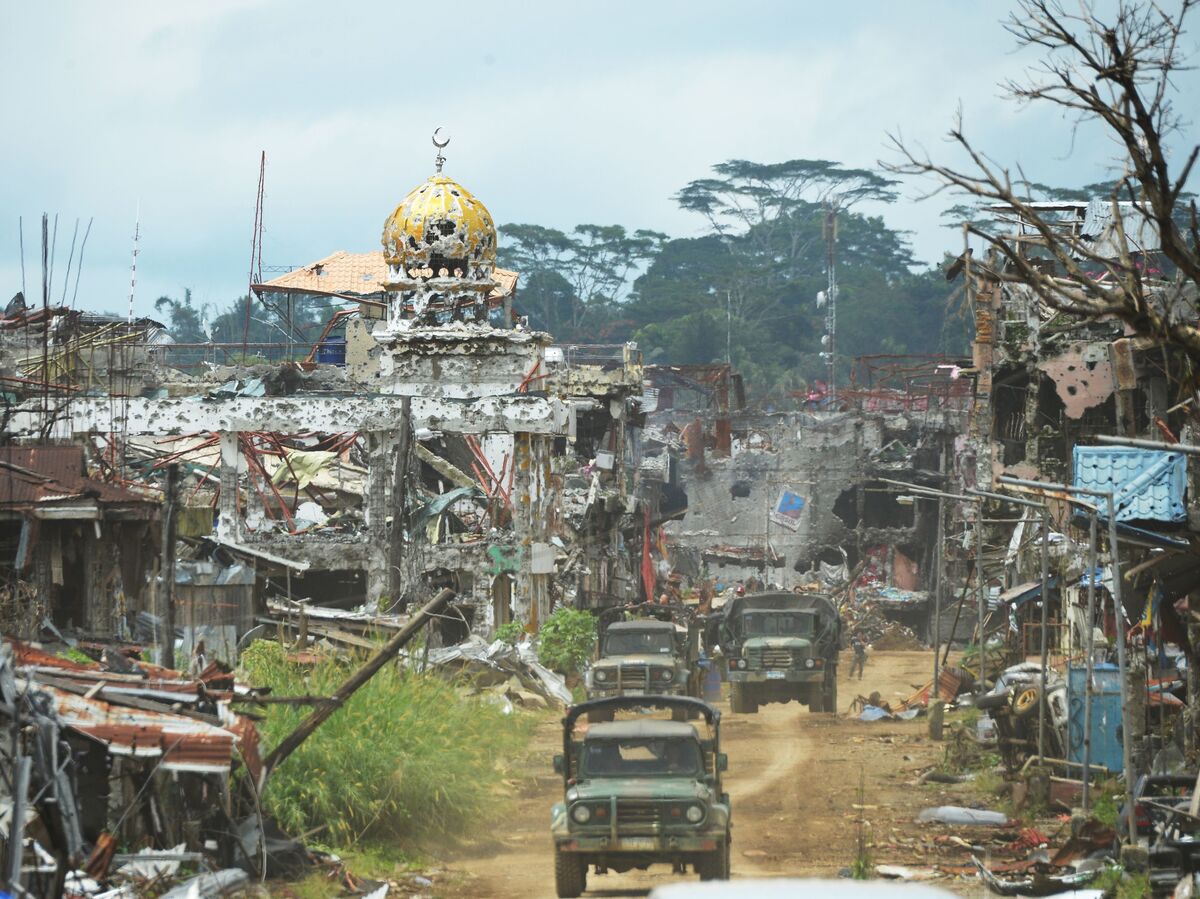 Military trucks drive past destroyed buildings and a mosque in what had been the center of fighting in Marawi on the southern Philippine island of Mindanao on Oct. 25, days after the military declared that the battle against ISIS-linked militants was over.

The Philippine Congress has extended martial law on the southern island of Mindanao for another year at the request of President Rodrigo Duterte, who says it is needed to continue the fight against armed groups in the region.

The move was overwhelmingly approved by both the Senate and House of Representatives, where Duterte and his allies hold big majorities. Duterte first imposed martial law in the Muslim-dominated south in May, and Wednesday's vote extends it through 2018.

Martial law, which extends military authority and allows for warrantless arrests and heightened surveillance, was declared in Mindanao after local militants laid siege to the city of Marawi in May. The battle that ensued between the ISIS-linked Islamists and Philippine security forces lasted five months, displaced over half a million people and left more than 1,100 people dead.

When the siege ground to an end in October, the military declared there were "no more terrorists." Duterte himself said, "Ladies and gentlemen, I hereby declare Marawi City liberated from the terrorist influence."

But in his letter to Congress asking for the extension of martial law, Duterte asserted that "the rebellion persists and a lot more remains to be done to ... bring back public order and safety in Mindanao."

The president said his request comes at the recommendation of the Armed Forces of the Philippines and the Philippine National Police, which both claim that the militants are regrouping and plotting new attacks.

The Marawi siege highlighted the Philippines' vulnerability to extremist violence, with some experts declaring that the country has become the weak link in terms of regional security.

Talking to reporters after the vote Wednesday, presidential spokesman Harry Roque said, "Public safety is our primordial concern; thus, we ask the public to stand behind the administration and rally behind our defenders to quell the continuing rebellion in Mindanao."

And Defense Secretary Delfin Lorenzana vowed that the security threats in the southern region would not spill into other parts of the country.

Those opposed to extending martial law say it is an abuse of power and fear it could lead to a declaration of martial law across all of the Philippines. Duterte has already come under fire from activists for his bloody war on drugs and general rebuffing of concerns over human rights and civil liberties.

Critics also argue that there's no constitutional basis for the extension. Main opposition party leader Sen. Francis Pangilinan told The Associated Press that major rebel attacks in the past have been quashed without declaring martial law.

"We will be in danger of becoming the monster that we seek to defeat, those who have no regard for law, order or respect for the constitution," Pangilinan said.

A June survey by the polling company Social Weather Station found that 57 percent of Filipinos who participated supported President Duterte's declaration of martial law on Mindanao, with the majority of respondents coming from Mindanao itself. However, that same survey also found that a majority of Filipinos opposed expanding the decree to the rest of the country.

Marawi still has a heavy military presence, said Saripada Pacasum of the Provincial Disaster Risk Reduction and Management Office. During the siege, his team of disaster respondents helped get civilians to safety and recover the bodies of the dead.

"[They] are manning the checkpoints and securing the main battle area inside the city," he told NPR via Facebook Chat. Pacasum said things are slowly getting back to normal, but that many citizens are still not allowed to see their properties, including himself.

It's an abuse of power, according to Pacasum, who said his mother told him stories about when martial law was declared across all of the Philippines during the dictatorship of President Ferdinand E. Marcos. During nearly 10 years of martial law, from 1972-1981, tens of thousands of people were imprisoned and thousands killed. Filipinos were also rounded up and tortured by the thousands, according to Amnesty International.

"Our properties sequestered, many Meranaos [people of Mindanao] were killed," Pacasum said, adding that all the stories his mother told about that time were bad.