Accessibility links
Net Neutrality Rules: FCC Votes To Repeal Restrictions On Internet Providers : The Two-Way After a brief security evacuation, the agency voted to undo Obama-era regulations that prohibit cable and telecom companies from blocking access to websites and apps or influencing how fast they load. 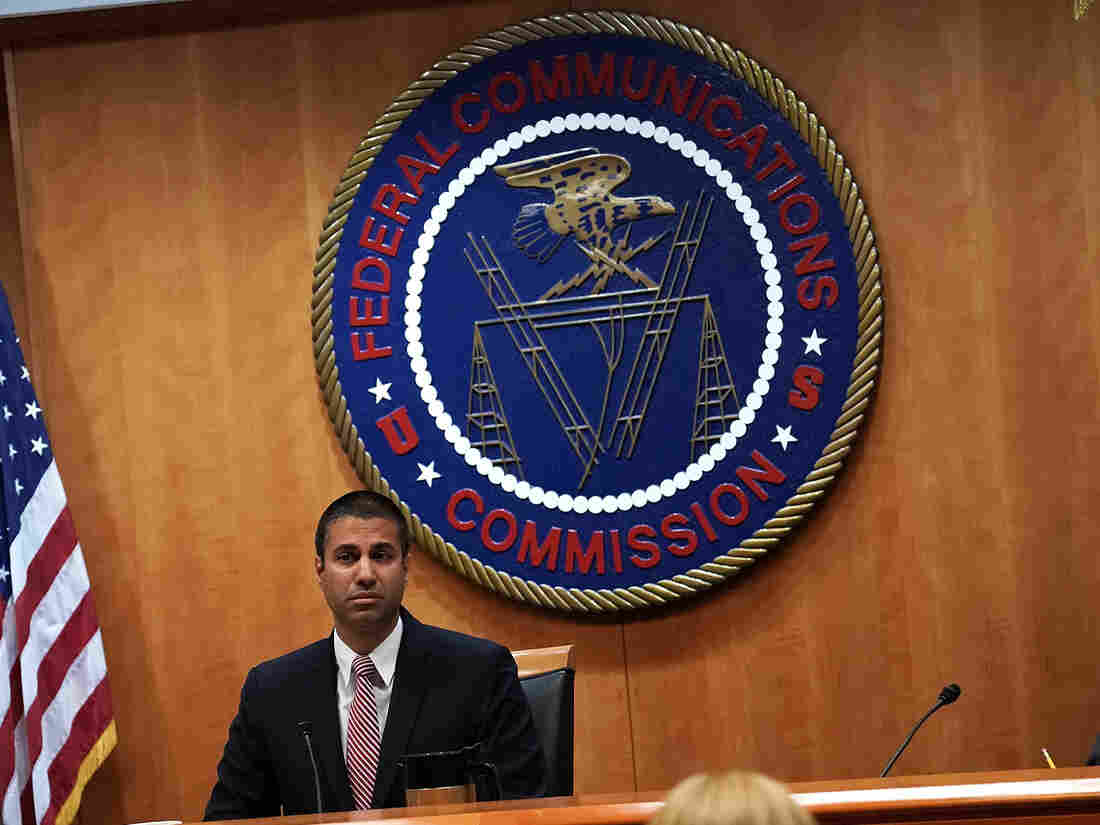 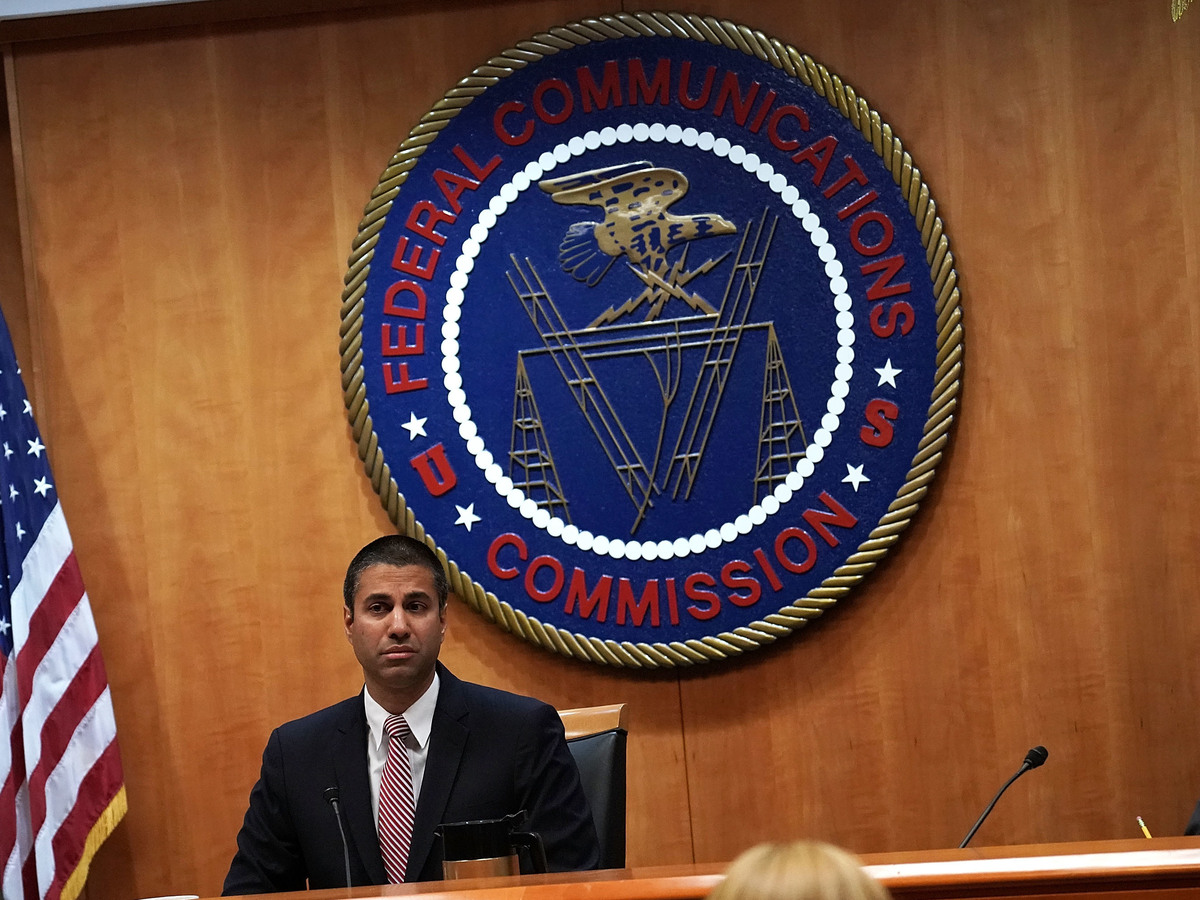 After a brief security evacuation, U.S. telecom regulators have voted to repeal so-called net neutrality rules, which restrict the power of Internet service providers to influence loading speeds for specific websites or apps.

After weeks of heated controversy and protests, the Republican majority of the Federal Communications Commission voted along party lines on Thursday to loosen Obama-era regulations for Internet providers.

The rules, put in place in 2015, banned cable and telecom companies from blocking or slowing down any websites or apps. They also prohibited broadband providers from striking special deals that would give some websites or apps "priority" over others.

The FCC's dramatic course reversal in favor of Internet service providers has propelled the once-wonky issue of net neutrality into the mainstream, turning it into an increasingly political matter. Advocacy groups are expected to press Congress to stop the FCC's vote from taking effect under the Congressional Review Act.

It's a principle that Internet providers should be neutral gateways that provide equal access to all legal web content.

Read all of NPR's coverage of the topic here.

The FCC's decision is otherwise slated to go into effect in the coming weeks, after a review by the Office of Management and Budget.

Before the FCC took the net neutrality vote, the meeting room was briefly evacuated over a security threat, which has not been officially explained. Livestreams from inside the empty rooms showed security guards with what appeared to be bomb-sniffing dogs.

In undoing the regulations, the FCC has reasserted one of the net neutrality requirements: that Internet providers — such as Comcast, Verizon and AT&T — disclose to their users what exactly they do to web traffic. This will essentially shift all enforcement to the Federal Trade Commission, which polices violations rather than pre-empts them through regulations.

Broadband companies have been saying that they do not intend to block, slow down or prioritize any web traffic as a result of this repeal, arguing that it's not in their interest to aggravate their users by messing with their Internet traffic.

Net neutrality activists, however, have been rallying widespread protests against the vote, saying the repeal will empower broadband companies to act as gatekeepers of the Internet, for example allowing them to prioritize their own video-streaming services.

Consumer interest groups have told NPR that they are also planning to pursue a lawsuit challenging Thursday's FCC decision, which would be the fourth related court case in a decade. (An appeal of the 2015 rules by AT&T, CenturyLink and a telecom trade group is pending at the Supreme Court.)

Additional legal challenges are pending from several state attorneys general, including from Washington and New York states. They have argued, among other things, that the FCC rushed the procedure and ignored a massive outpouring of millions of public comments.

The commenting process has been mired in controversy after several reviews found a number of the comments to be fraudulent or duplicative, using fake names, fake addresses and even names of dead people.

FCC Chairman Ajit Pai, who voted against the rules in 2015, has portrayed the Obama-era regulations — which put broadband providers under the strictest-ever FCC oversight — as government "micromanaging the Internet." He and broadband companies have argued that the regulations have stifled innovation and investment in broadband networks.

"What is responsible for the phenomenal development of the Internet? Certainly wasn't heavy-handed government regulation," Pai said on Thursday, adding his oft-repeated line that "there was no problem to solve. The Internet wasn't broken in 2015, we were not living in some digital dystopia. ... It is time for us to bring faster, better and cheaper Internet access to all Americans."

Large tech companies — such as Netflix, Google and Facebook — have long spoken in support of strict net neutrality rules. However, as they've grown in size, their advocacy has become more muted, putting on the forefront smaller competitors like Etsy and Vimeo, which argue that startups stand to lose the most on an Internet that allows for special "priority" traffic deals.

"I have heard from innovators, worried that we are standing up a 'mother-may-I' regime, where the broadband provider becomes arbiter of acceptable online business models," Democratic FCC Commissioner Mignon Clyburn said in a blistering dissent on Thursday, adding, "When the current 2015 net neutrality rules are laid to waste, we may be left with no single authority with the power to protect consumers."

In a statement, the Internet Association, which represents dozens of tech companies, called Pai's repeal "a departure from more than a decade of broad, bipartisan consensus on the rules governing the internet" and amounted to "relying" on Internet providers "to live to their own 'promises.' "

Editor's note: NPR's legal counsel has filed comments with the FCC on behalf of the public radio system, opposing the repeal of the 2015 net neutrality rules. You can read them here.