Accessibility links
Kentucky Lawmaker Dies In Apparent Suicide Amid Accusations Of Sexual Assault : The Two-Way State Rep. Dan Johnson was found dead near his vehicle of an apparent self-inflicted gunshot wound days after an investigative report raised past accusations of sexual assault of a 17-year-old girl. 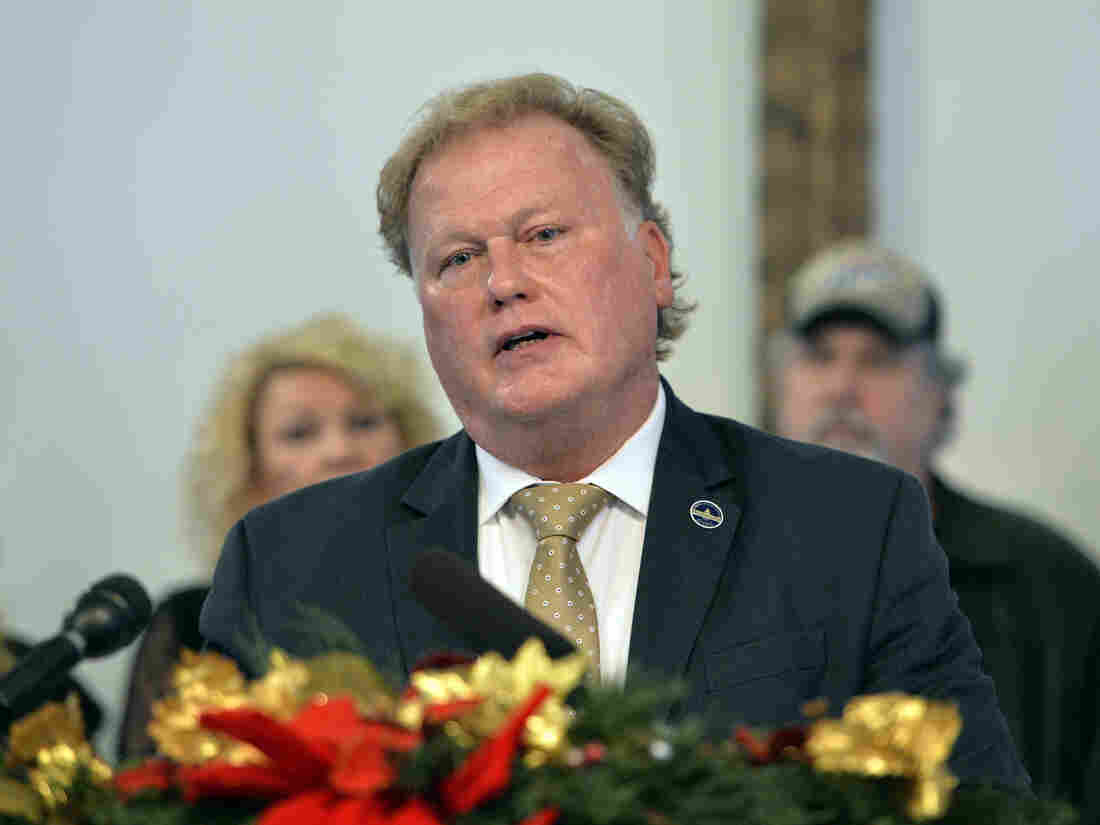 At his church on Tuesday, Kentucky state Rep. Dan Johnson defended himself against accusations that he sexually assaulted a 17-year-old girl in January 2013. Timothy D. Easley/AP hide caption 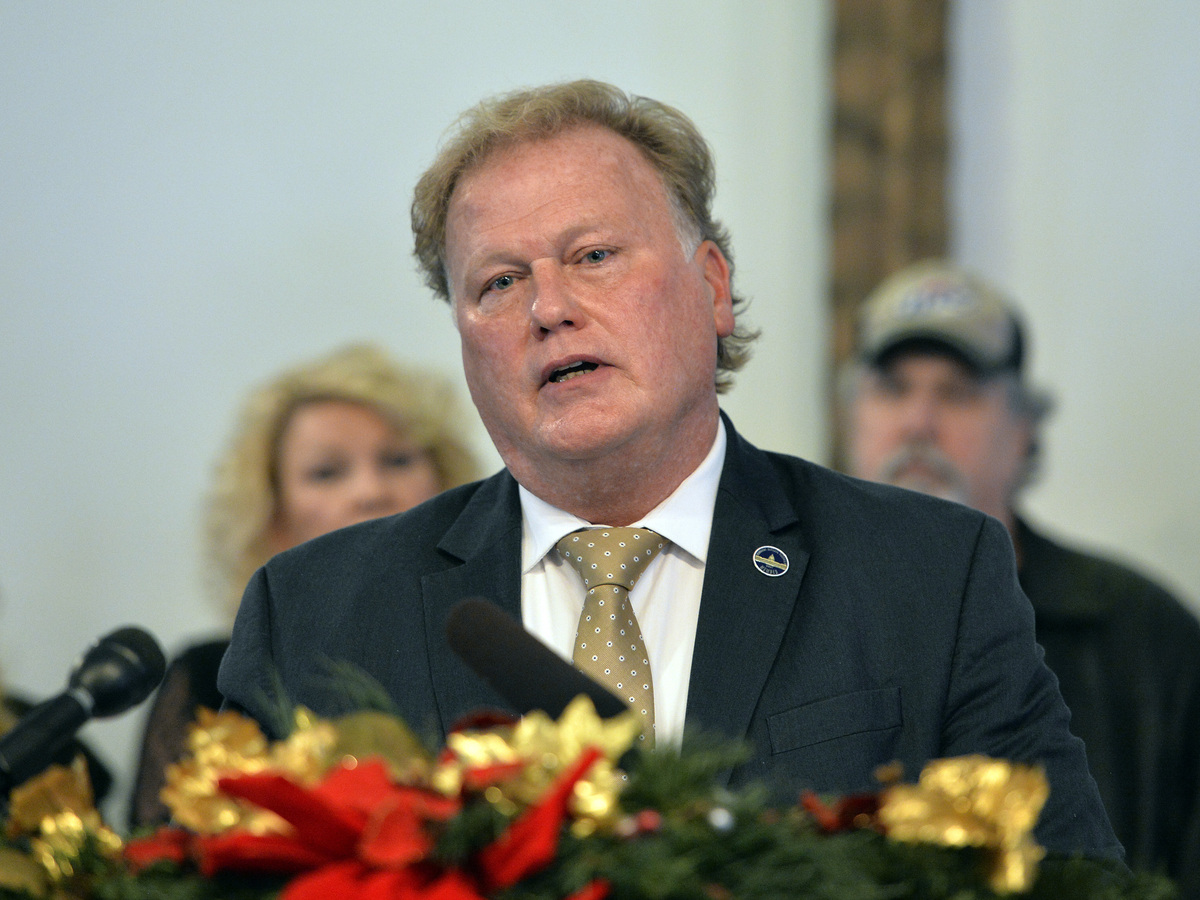 At his church on Tuesday, Kentucky state Rep. Dan Johnson defended himself against accusations that he sexually assaulted a 17-year-old girl in January 2013.

A Kentucky state lawmaker has apparently killed himself after facing several allegations in reports by the investigative arm of Louisville Public Media — the most serious of which was the alleged sexual assault of a 17-year-old girl in the basement of the church where he served as pastor.

Republican Rep. Dan Johnson, 57, was found dead Wednesday evening beside his automobile on a bridge over the Salt River in Mount Washington. Authorities had been searching for him because of a post on his Facebook page — since removed — that appeared to be a suicide note. In the post, he wrote that "The accusations from NPR are false," adding that America "will not survive this type of judge and jury fake news ..."

NPR neither investigated the story nor aired or published it. The accusations of sexual assault were part of an unflattering profile of Johnson published Monday by Louisville Public Media's Kentucky Center for Investigative Reporting. The initiative is the creation of Louisville Public Media, a nonprofit 501(c)(3) corporation that operates three NPR member stations, WUOL, WFPK and WFPL.

In a reference to Johnson's penchant for calling himself "pope," the series, titled "The Pope's Long Con: A Kentucky preacher-turned-politician's web of lies," also cast doubt on his story of heroics in New York immediately after the Sept. 11 attacks as well as possible insurance fraud dating from the 1980s.

The report was based on police records and interviews, including of the woman who says that a drunk Johnson kissed and fondled her at the church after New Year's Eve 2012 celebrations.

KyCIR reports that at some time after the alleged incident, "The Louisville Metro Police Department opened an inquiry, but detectives later closed the case, citing a lack of interest or assistance from the teen. She told KyCIR she never wanted the case abandoned." Detectives reopened the case months ago, following KyCIR's inquiries.

Johnson — a staunch conservative — was elected to the Kentucky Legislature in 2016 after a campaign that briefly gained him national notoriety for posting racist images of President Barack Obama and his family. His Facebook profile picture, dated Oct. 3, 2016, shows Johnson in clerical collar standing next to a smiling Donald Trump.

At a news conference held Tuesday at his Heart of Fire Church in the Fern Creek neighborhood of Louisville, Johnson said the allegation of sexual assault "has no merit." He went on to blame NPR for the story, saying, "NPR is casting the first stone" as he held up a rock with "NPR" written on it.

In a statement from Louisville Public Media, President Michael Skoler said the organization was deeply saddened to hear of Johnson's death.

Skoler said the Kentucky Center for Investigative Reporting's aim, "as always, is to provide the public with fact-based, unbiased reporting and hold public officials accountable for their actions."

"As part of our process, we reached out to Representative Johnson numerous times over the course of a seven-month investigation. He declined requests to talk about our findings," he added.

Saddened to hear of tonight’s death of KY Representative Dan Johnson...My heart breaks for his family tonight...These are heavy days in Frankfort and in America...May God indeed shed His grace on us all...We sure need it...

And Kentucky state Rep. Jeff Hoover, who resigned as House speaker last month after allegations of sexual harassment, posted on Twitter: "In America, those accused of wrongdoing are presumed innocent until proven guilty," adding, "Personal attacks don't have to be part of politics."

A previous photo caption incorrectly said the alleged sexual assault occurred in 2012. It happened just after midnight on Jan. 1, 2013. In addition, the story suggested Rep. Jeff Hoover had resigned from the state House; he only stepped down from his post as speaker.