Accessibility links
After Maria, Puerto Rico Struggles Under The Weight Of Its Own Garbage : The Two-Way Even before the hurricane, most of the island's landfills were filled beyond capacity, and nearly half had EPA closure orders. The storm generated millions of cubic yards of waste and debris. 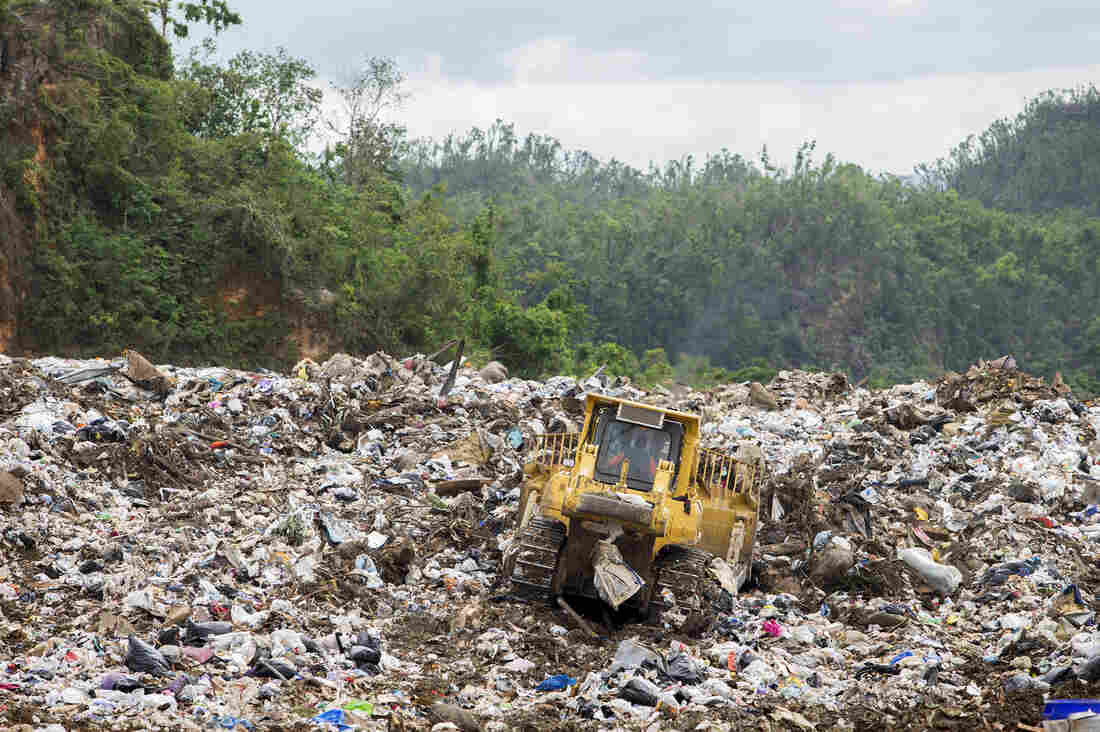 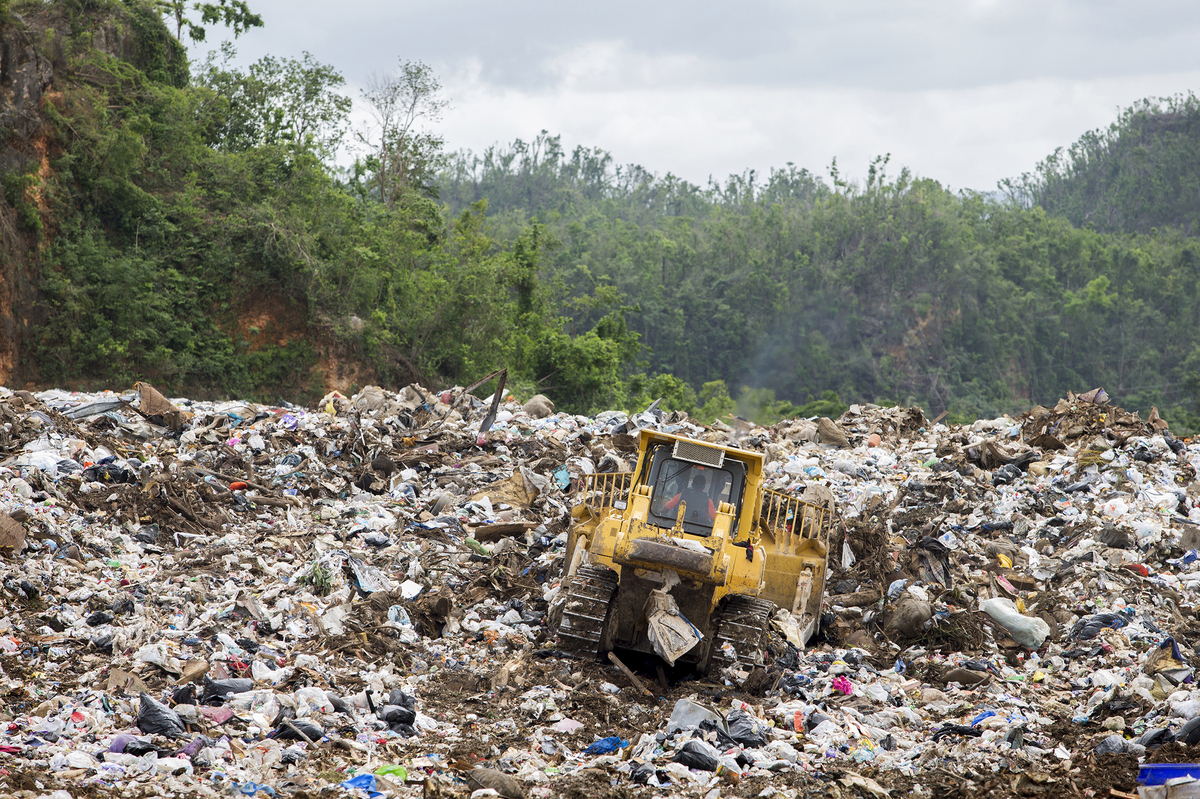 The active part of the landfill in Toa Baja is currently a hot, rancid, open dump. Federal regulations require trash piles to be covered daily with earth. But the site's supervisor says that's currently impossible.

Outside Puerto Rico's capital, a three-story-high mountain of debris and waste sits smack in the middle of what was a suburban soccer field before Hurricane Maria devastated the island.

Blue bleachers peek out from the edge of the trash pile, as a line of trucks rolls in to dump even more tree branches and moldy furniture. Workmen wearing yellow hard hats operate diggers to add the new waste to the growing pile in the center of the field.

Puerto Rico is struggling under the weight of its own garbage. Even before Maria hit in September, the Environmental Protection Agency says, most of the island's landfills were filled beyond capacity and that nearly half were under orders to close.

Puerto Rico's Solid Waste Authority estimates that the powerful hurricane created 6.2 million cubic yards of waste and debris. That's enough trash to fill about 43 football stadiums with piles of waste eight stories high, according to a measure used by FEMA.

And it has to go somewhere.

Workmen at the soccer field say the site became a makeshift dump because the landfill for the Toa Baja municipality, near San Juan, is so flooded with trash that wait times to dump debris can be hours. When the soccer site becomes too full, the workers say waste is then moved to the landfill in trucks. 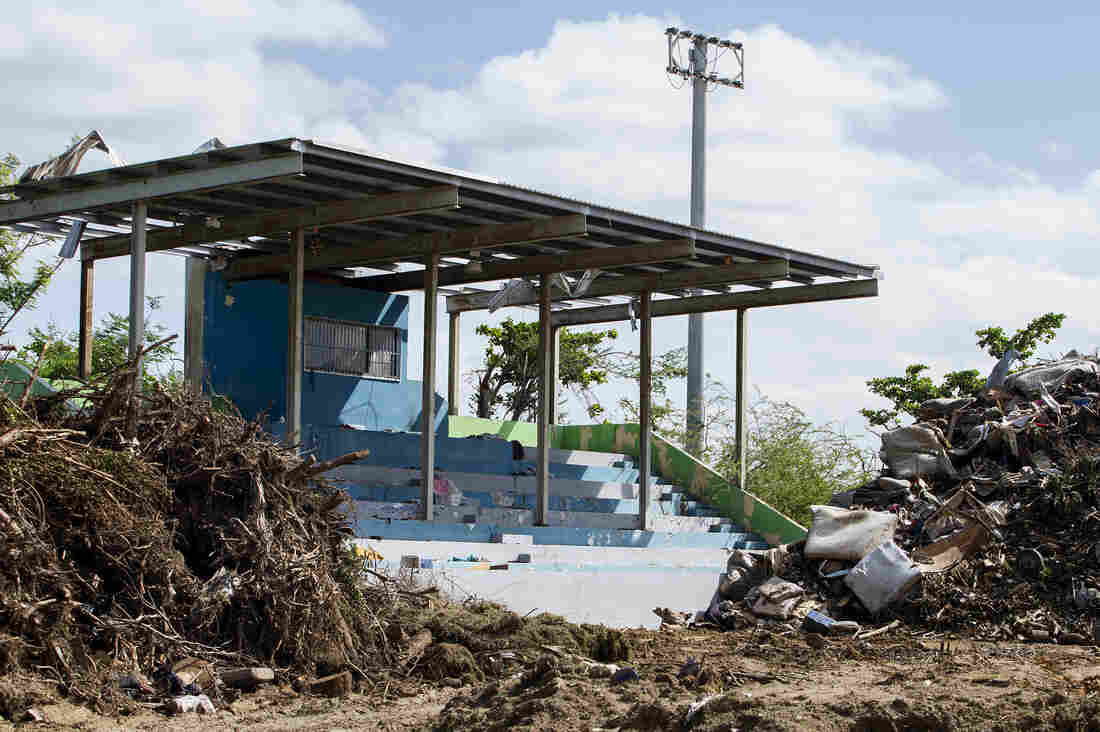 A soccer field in Toa Baja, Puerto Rico, has become an improvised dump site because the main municipal landfill is so busy. José Jiménez-Tirado for NPR hide caption

In Maria's wake, local governments are supposed to separate tree branches and other "green waste" for composting so that it doesn't clog up landfills, says Antonio Rios, head of the Solid Waste Authority, the agency that sets the U.S. territory's waste policy.

That composting process isn't happening everywhere, Rios acknowledges. Green debris is still winding up in overflowing landfills across the island, though he says authorities are trying to divert additional material to landfills that have more room. Rios points out that the hurricane also has created other types of waste, things like broken kitchen appliances and food that went rotten because of a lack of electricity.

The landfill in Toa Baja is managed by the private firm Conwaste and takes in trash from at least four municipalities. It has been deeply troubled for years.

The site is supervised by 25-year-old Lionel Ruiz. Last month, he says, it accepted 36,000 tons of waste — that's 70 percent more than the month before the hurricane. Ruiz points to trash-filled trucks waiting in a line that stretches down a dirt road and off into the distance.

"It's more busy than usual," Ruiz says. "You see the line? We never have that line in normal operation." 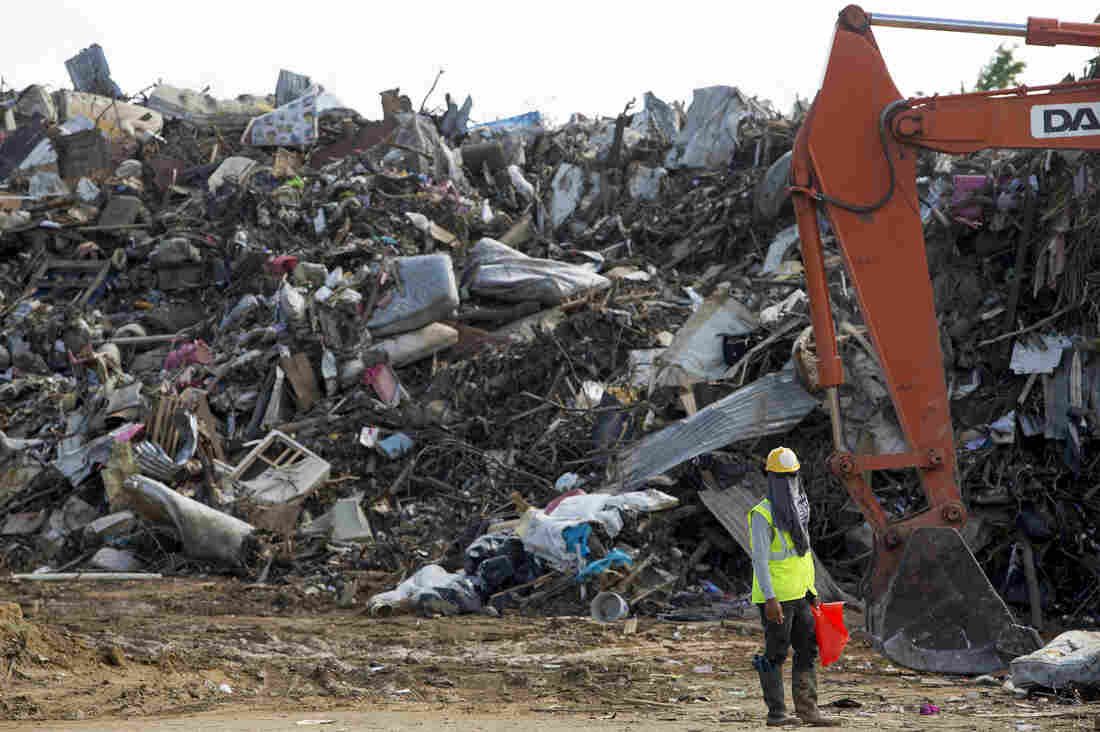 Heaps of tree branches, moldy furniture and other debris from Hurricane Maria piles up at a former soccer field now being used as a dumping site in Toa Baja, Puerto Rico. Most of the island's landfills were already over capacity before the storm devastated the island in September. José Jiménez-Tirado for NPR hide caption 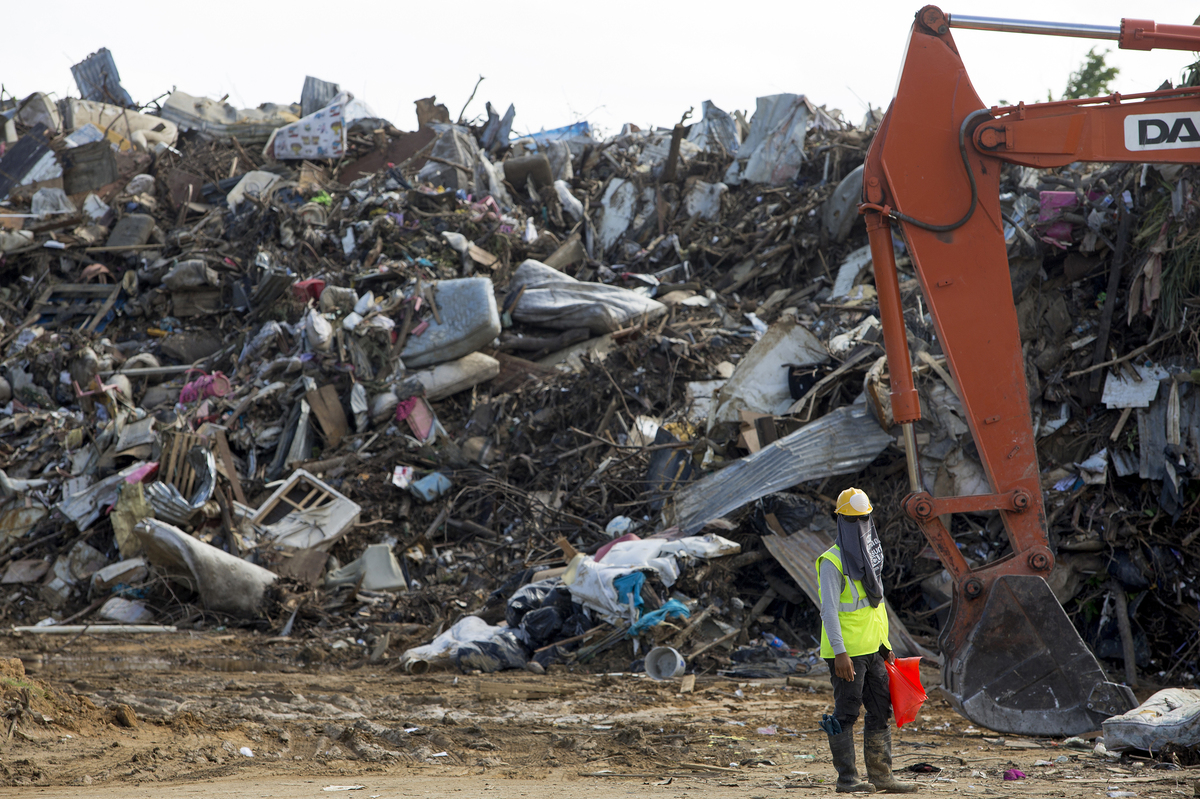 Heaps of tree branches, moldy furniture and other debris from Hurricane Maria piles up at a former soccer field now being used as a dumping site in Toa Baja, Puerto Rico. Most of the island's landfills were already over capacity before the storm devastated the island in September.

In 2008, the EPA ordered the Toa Baja landfill to close by 2014 because it posed an "imminent and substantial endangerment to health and the environment." The agency said environmental inspectors found evidence that the landfill did not have a system to control liquid seeping through the garbage pile and into the ground. The agency found that this substance, called leachate, could potentially contaminate a nearby aquifer and wetlands.

In 2012, the EPA permitted the landfill to delay the closure for an unspecified amount of time. It was also allowed to create a smaller area incorporating more environmental precautions — such as a lining to prevent seepage — and begin accepting waste there.

The problems are much the same across the lush tropical island of Puerto Rico. The EPA got directly involved in the island's landfills in 2002, and has since ordered at least 12 of the approximately 29 landfills to close, which can be a years-long process.

It's not immediately clear how many sites — most of which are already at capacity — have actually shut down.

Rios of the Solid Waste Authority estimates that at current recycling rates, all of the island's landfills will be full in 20 to 25 years.

Even the newly added space in Toa Baja's landfill is rapidly filling up, Ruiz says. Before the hurricane hit, he said he thought it would take five years for that area to fill up; Maria has sped up the timeline.

And he's grappling with immediate problems. Birds and insects circle around what is currently a hot, rancid, open dump.

"This is the active area of the landfill, you will see a lot of uncovered material," Ruiz says. Workers would normally cover the expansive mess with earth every day to comply with federal regulations, but he says they haven't been able to do so for a week because the private trucks they use are now being used by FEMA. 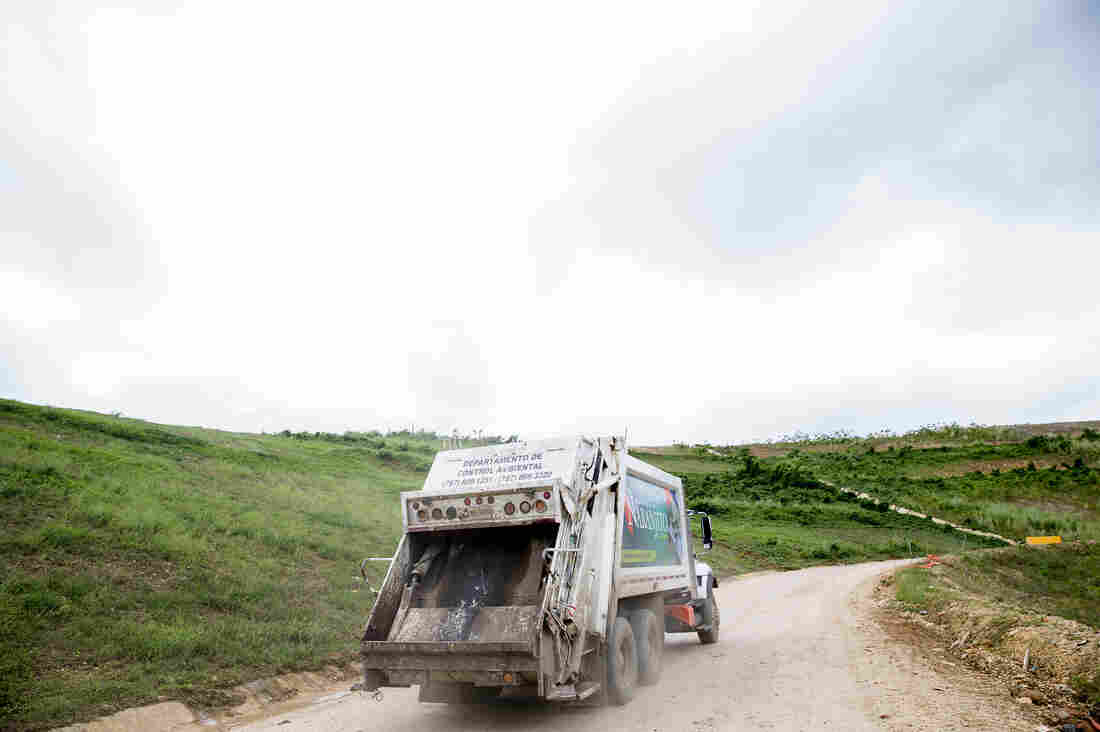 A truck drives past a closed section of the municipal landfill in Toa Baja, which is near Puerto Rico's capital city of San Juan. José Jiménez-Tirado for NPR hide caption

The uncovered mounds of rotting garbage is upsetting to people down the hill in the neighborhood of Candelaria, people like 83-year-old Angelo Fernandez. "The smell, the stink!" he says, totally exasperated. "Every time they leave it open, the smell is awful."

In his 41 years living here, he's seen mountains of trash rise from the ground, parts of which are now covered with dirt and vegetation. But the waste lies just inches under the surface.

He says people living in Candelaria suffer from asthma and other breathing problems because of the landfill. They cough a lot.

Actually closing a landfill is expensive, costing approximately $200,000 per acre, according to Rios. Puerto Rico is struggling with more than $120 billion in debt and pension obligations, and has filed for a bankruptcy-like procedure — and that was before the hurricane.

The EPA has acknowledged that the budget crisis is making it more difficult for local governments on the island to handle the garbage problem. The municipalities "have always had limited funds to implement the environmental and engineering controls required to improve, and ultimately close, the landfills," the agency says. And Puerto Rico's Environmental Quality Board hasn't required municipalities to set money aside in case their landfills needed to close.

Another issue, Rios says, is that some of the landfills now under closure orders aren't charging garbage trucks high enough fees to generate the money to actually shut down. 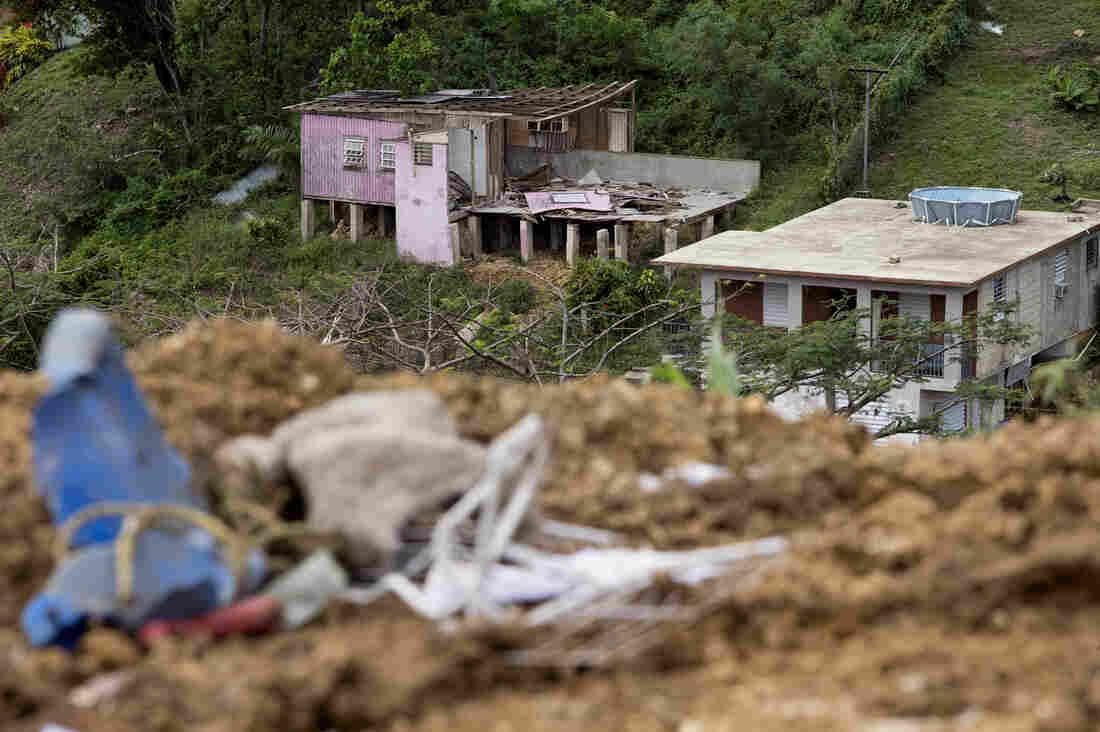 Ultimately, the troubled landfill system is "a public health issue and it's about to collapse really soon," says Agustín Carbo Lugo, former head of the Solid Waste Authority. He says Puerto Rico also needs to think beyond landfills rather than just open new ones. Recycling rates on the island are about half of what they are on the U.S. mainland.

"We need to look for different alternatives," he says, particularly because Puerto Rico has limited space. That might include a number of other waste management techniques such as "waste-to-energy," which uses methods like incineration to produce electricity and heat.

Most importantly, Carbo Lugo says, "people need to change their behavior and it's quite complex, how you change that in a small island. But it can be done — it just, people need to understand what's at stake here."

Those stakes are clear to Fernandez, who lives next to the landfill. He says that if it closed for good, "I think it would be a better place to live. I know it would be."