Accessibility links
Scientists Say Japanese Monkeys Are Having 'Sexual Interactions' With Deer : The Two-Way Researchers witnessed adolescent female Japanese macaques mounting sika deer in ways that were "sexual in nature." They have several theories for why but say more research is necessary.

Scientists Say Japanese Monkeys Are Having 'Sexual Interactions' With Deer

Scientists Say Japanese Monkeys Are Having 'Sexual Interactions' With Deer 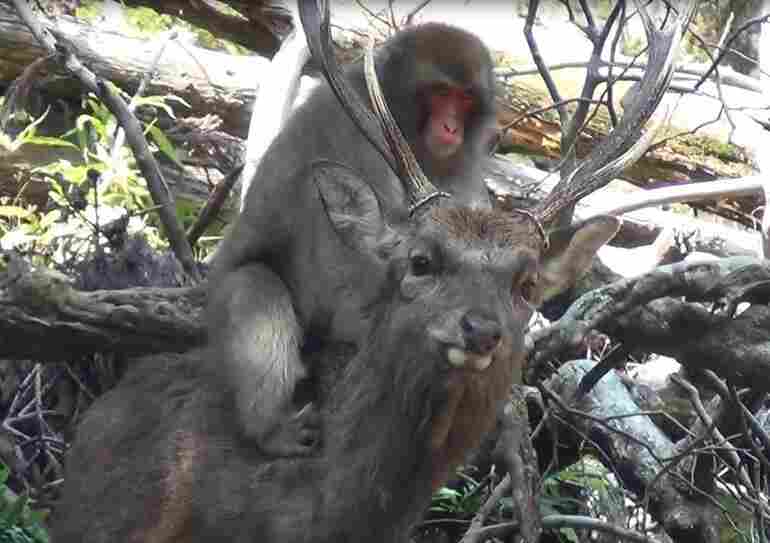 An adolescent female Japanese macaque on the back of a male sika deer. Researchers have looked into some macaques' attraction to the deer. Courtesy of Noëlle Gunst hide caption 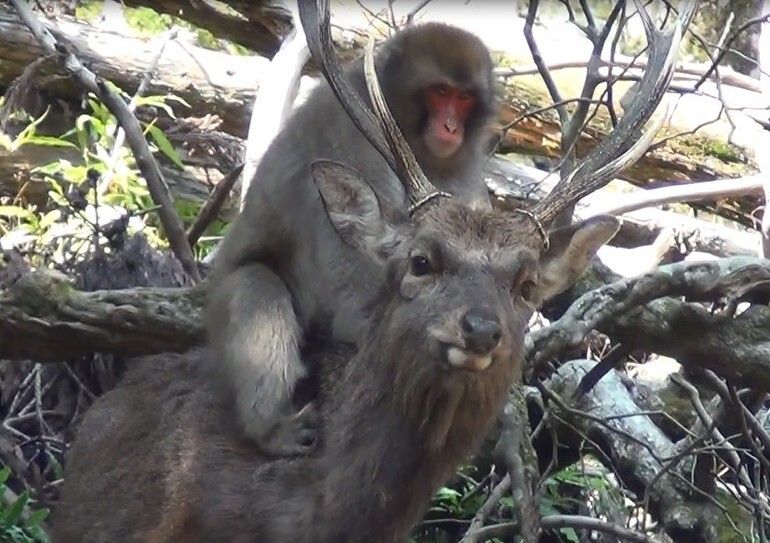 An adolescent female Japanese macaque on the back of a male sika deer. Researchers have looked into some macaques' attraction to the deer.

Adolescent female monkeys in Japan have repeatedly engaged in sexual behaviors with sika deer, for reasons that are not yet clear, according to researchers who study macaque behavior.

The study, published in the peer-reviewed Archives of Sexual Behavior, follows up on a single report from earlier this year of a male macaque mounting a female sika deer on Yakushima Island.

That report was intriguing, but a co-author of the new study told The Guardian it was essentially anecdotal. "Even the sexual nature of this interaction was not clearly demonstrated," said Noëlle Gunst, a researcher at the University of Lethbridge in Canada. So she and her colleagues sought to nail down the nature of the mounting.

Looking at a different set of relationships — adolescent female monkeys and deer, particularly male deer, in Minoo, Japan — the researchers found interactions that definitely seemed to be sexual in nature. (The female monkeys were climbing onto the deer and grinding their genitals against the deer's backs. Yes, there's video.)

Japanese macaques are known to ride deer like humans ride horses, for fun or transportation — behavior the deer seem to tolerate in exchange for grooming and discarded food. But these monkeys were up to something different.

The researchers compared the monkey-deer interactions, which happened during mating season, with homosexual monkey-monkey interactions, where female macaques mount each other. They paid close attention to the "mounting postures" the monkeys assumed on the deer, and the vocalizations they made, to determine that the interactions were, in fact, sexual ... at least for the monkeys.

Some of the deer shook the monkeys off and fled the situation. But adult male deer, in particular, were likely to just stand calmly as the female monkeys thrusted. In some cases, the male deer kept eating.

Five of the female monkeys had "successful heterospecific consortships" with deer. That is, they had "a temporary, but exclusive, sexual association" with an individual from another species, with "three or more mounts within a 10-minute period."

All told there were 13 successful pairings — and 258 separate mounts.

There were eight failed attempts as well. In some of those cases, the monkey-deer interaction was interrupted because another young female macaque came along, "successfully displaced the original adolescent female mounters and took over the deer to start their own heterospeciﬁc consortships," the researchers noted. That was not a plot twist they had anticipated.

And the interactions went beyond the mere moment of thrusting. The "monkey-to-deer solicitations ... were persistent and conspicuous," the researchers write. Young female monkeys would identify a "particular target" and make calls that sound identical to the ones in monkey-on-monkey courtship.

If the deer avoided the interaction, "the female monkeys often displayed sexually motivated tantrums which consisted of crouching on the ground, body spasms and screaming, while gazing at the deer," the study found.

So. What does this all mean?

Sexual interactions between animals of different species are not unheard of (even when you take human behavior out of the equation). But most of them don't look like these monkey-deer consortships.

Often the animals are of very similar, related species, and the mating might just be a case of mistaken identity. Clearly, that's not the case here. Writing with significant understatement, the researchers note that "this interpretation is implausible in our case because the anatomical differences between Japanese macaques and sika deer are profound."

Scientists have five theories about why the young monkeys might seek out sexual relationships with deer.

First, it might be a way for a less-mature monkey to practice for future sex with other monkeys.

Third, they might be an option for young macaques with no available sexual partners of their own species. Apparently adolescent female macaques are not the "preferred" partner for male macaques and are "routinely rejected." This is what the researchers call the "best of a bad job" hypothesis.

Fourth, it might be the result of nonsexual interactions, with macaques riding deer either for fun or for transport and discovering it's a source of genital stimulation that they then seek out on purpose.

Finally, the researchers say, this might be a kind of cultural practice. Japanese macaques display different behaviors in different locations — some wash their food, or take hot-spring baths, or play with snowballs.

Adolescent females grinding on the backs of deer might similarly be a cultural phenomenon. But it has only been observed at Minoo within the past few years.

"The monkey-deer sexual interactions reported in our paper may reflect the early stage development of a new behavioural tradition at Minoo," Gunst-Leca told The Guardian.

Alternatively, the paper notes, it could be a "short-lived fad." Time will tell.