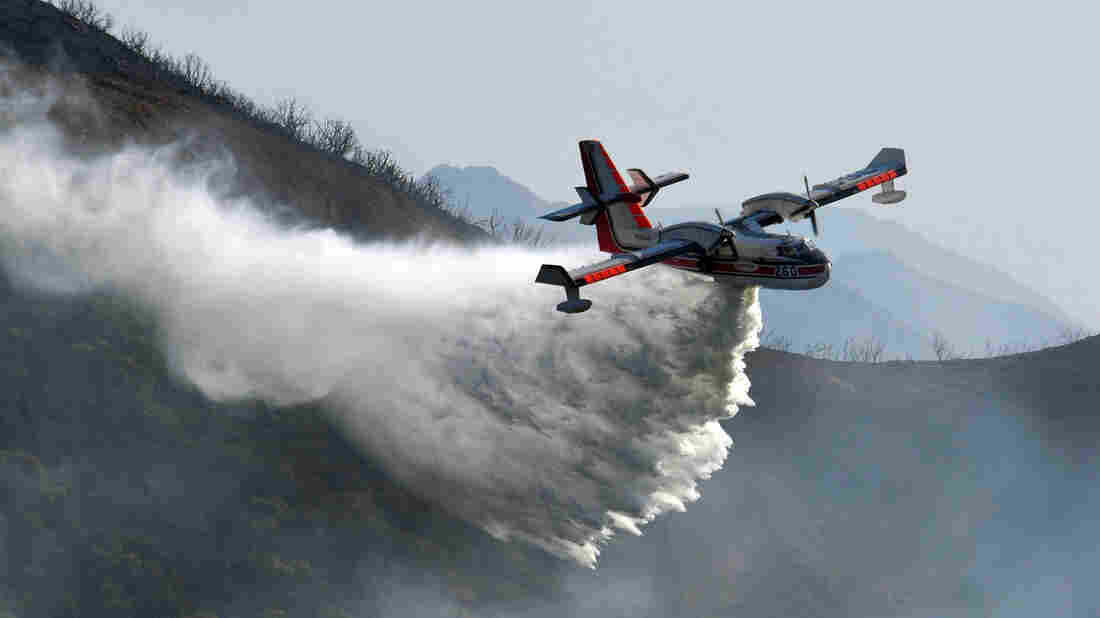 In this photo provided by the Santa Barbara County Fire Department, a Bombardier 415 Super Scooper makes a water drop on hot spots along the hillside east of Gibraltar Road in Santa Barbara, Calif., on Sunday morning. Mike Eliason/AP hide caption 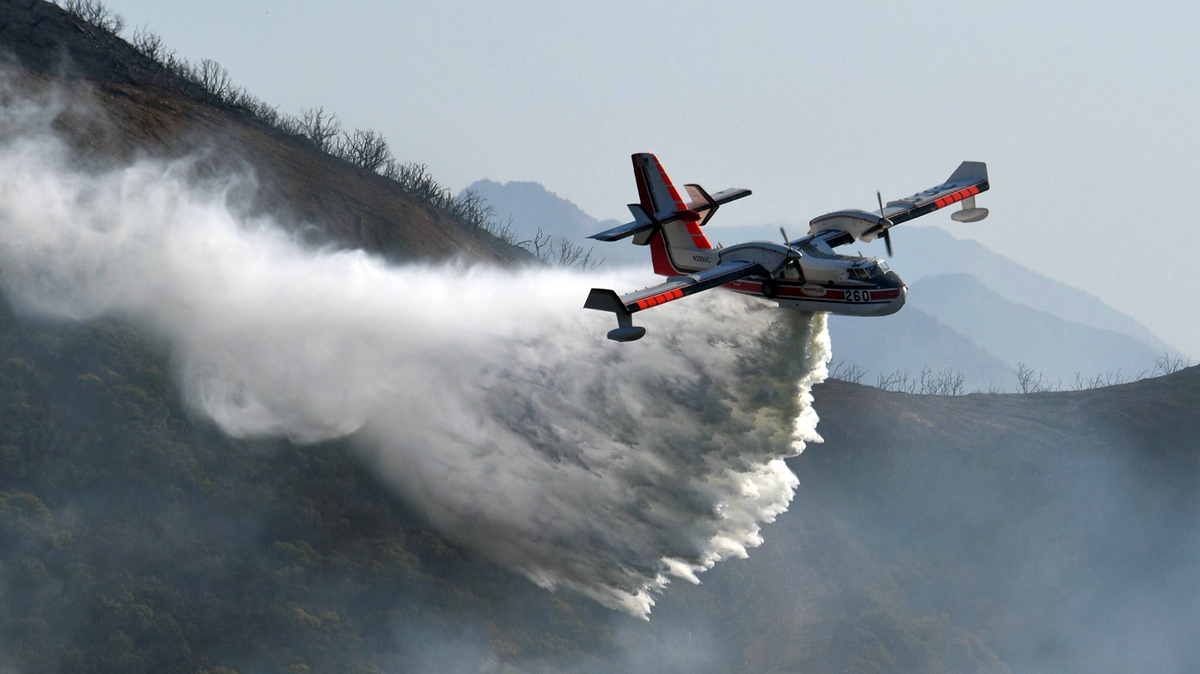 In this photo provided by the Santa Barbara County Fire Department, a Bombardier 415 Super Scooper makes a water drop on hot spots along the hillside east of Gibraltar Road in Santa Barbara, Calif., on Sunday morning.

Firefighters battling the massive Thomas Fire northwest of Los Angeles were working against another round of high winds to prevent its spread to homes in Santa Barbara and Montecito.

The blaze — which has gone on for two weeks and engulfed some 269,000 acres — has become the third largest wildfire in the state's modern history.

The Thomas Fire is now 45 percent contained, according to Calfire. It has destroyed over 1,000 structures, including at least 750 homes.

A slew of voluntary evacuation orders were in effect over the weekend for Santa Barbara and Ventura counties, including for the Santa Barbara Zoo. Thomas Incident Commander Todd Durham said the fact [that] people heeded them helped thousands of firefighters in the area to focus on saving homes, reports member station KCLU's Lance Orozco. 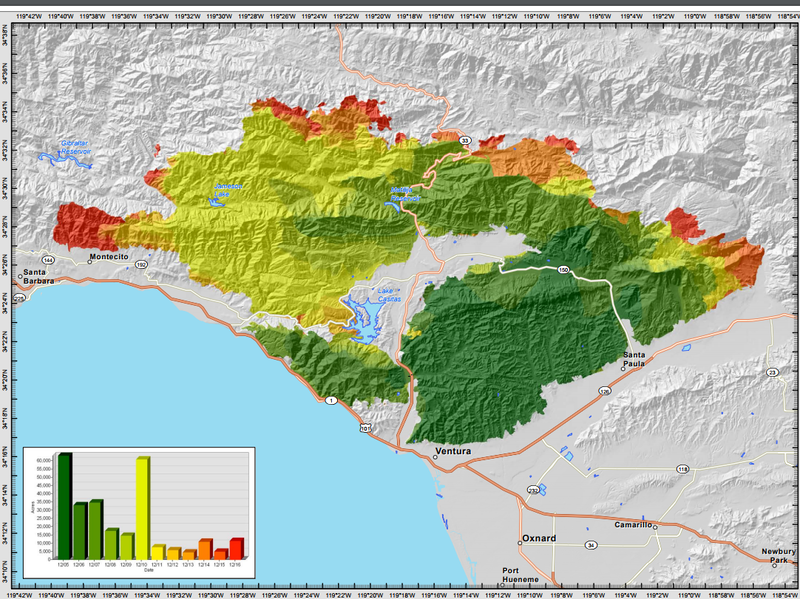 An incident map from Sunday, showing the spread of the Thomas Fire Calfire hide caption 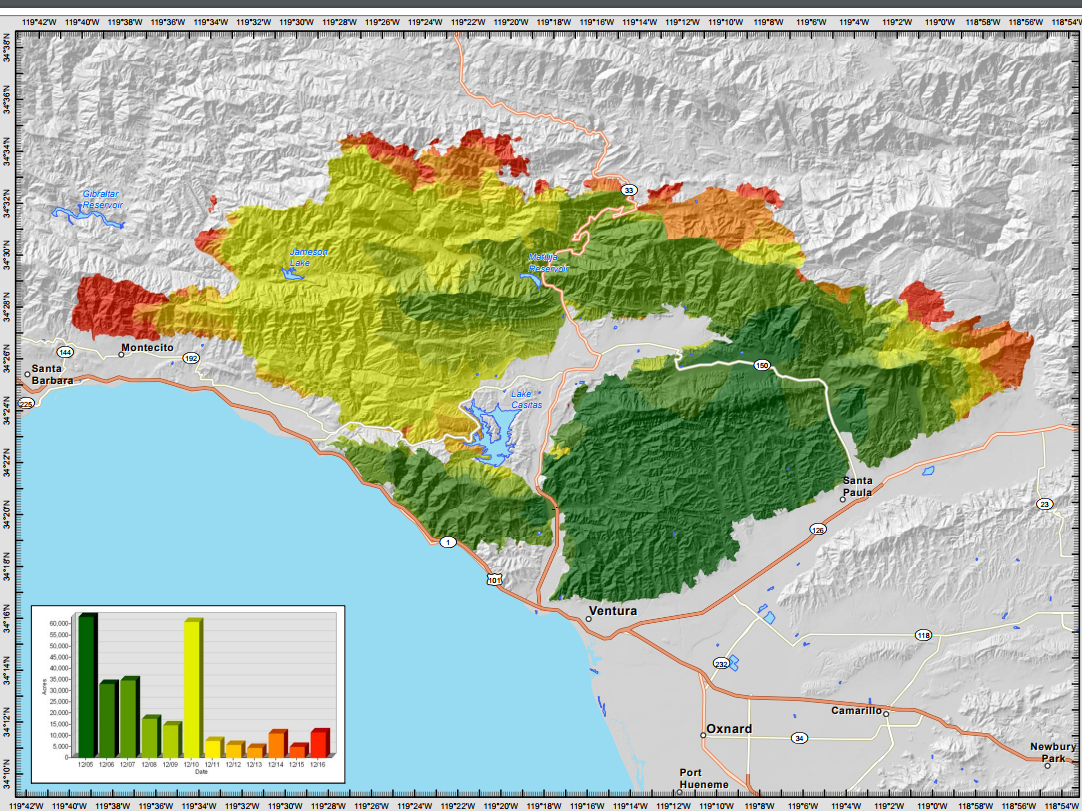 An incident map from Sunday, showing the spread of the Thomas Fire

Northerly "sundowner" winds drove the fire south and west on Saturday night, according to Mark Brown, of the California Department of Forestry and Fire Protection.

"When the sundowners surface in that area and the fire starts running down slopes, you are not going to stop it," Brown said at a news conference. "And we are not going to stand in front of it and put firefighters in untenable situations."

Gusts up to 70 mph in mountainous areas along the coast were threatening to bring down power lines and spark more fires, according to Southern California Edison, which is considering a preventative power cut to some parts of Malibu, the AP reports.

Danielle Karson, reporting for NPR, says "The winds are expected to calm down [on Monday], which will help firefighters to focus on defensive work, such as bulldozing fire lines," she says, adding, "But it will be a short respite [as] strong winds are forecast again for Wednesday."

Voluntary evacuation orders were issued to the Santa Barbara Zoo on Saturday. Workers began putting some animals into crates and kennels while others were kept indoors to protect them from smoke and ash exposure, according to KPCC.

Rich Block, the zoo's CEO, told KPCC that the signs of trouble with animals due to smoke inhalation might not be "readily apparent ... but over time, things can develop."

The zoo has about 500 animals, including a pair of Amur leopards, a critically endangered species.

The Thomas Fire has claimed at least two lives, firefighter Cory Iverson, 32, who died of smoke inhalation and a 70-year-old woman who died in a car crash on an evacuation route. Iverson was honored by mourners who stood on freeway overpasses as his funeral procession went by, the AP says.