Accessibility links
Disney World Adds Trump Animatronic Figure, But Likeness Is Lacking : The Two-Way The Hall of Presidents is updated with a new robot for every new leader. So it's not the presence of President Trump that is raising eyebrows. It's ... well, it's his face.

Specifically, a new animatronic figure in the Hall of Presidents at Walt Disney World, where every former leader of the republic is depicted in an "audio-animatronics show."

The exhibit is currently closed for updates and maintenance, but Disney has released a sneak peak of the new addition.

It's not the presence of President Trump in this lineup that's raising eyebrows.

Or a certain doll from a horror franchise?

Trump robot in the Hall of Presidents looks like a 71-year-old Chucky doll. pic.twitter.com/yLCBmhpNvG

Or — and we're very, very sorry to keep bringing back the 2016 election, like we are all caught in some vicious space-time vortex, or like our reality exists inside a demented computer simulation currently experimenting with a rewind button — but ...

Here me out on this. Clearly Disney had Hilary's robot ready to go and then they had to try and make it look like Trump. Don't hate me. This is just a necessary and painful fact we all need to deal with. pic.twitter.com/biSirfwE59

no joke, that Donald Trump robot at Disney’s Hall of Presidents looks like the child of him, Hillary Clinton, Jon Voight, and Roger Ebert. kill it before AI gives it more than two terms.

Then there is the robot's outfit, with an unbuttoned suit and long tie — some call it embarrassing, while others say it's true to life.

So many embarrassing & humiliating details about the animatronic:

There are a few important things to note here.

First, while some corners of the Internet are amused by the face of robot Trump, the president's supporters are neither laughing nor particularly concerned.

President Trump has officially been added to Disney's Hall of Presidents in the Magic Kingdom. I love it! 🇺🇸 pic.twitter.com/W7ns9zqozH

Some Trump fans were disappointed that his tie was blue and white, instead of red, but overall, there was great enthusiasm among his base for the animatronic impression of the president.

Several supporters expressed surprise that Trump was even added to the lineup, based on a theory that Disney was run by liberals who would never respect the president enough to add him to the exhibit, as it had for every president before him. 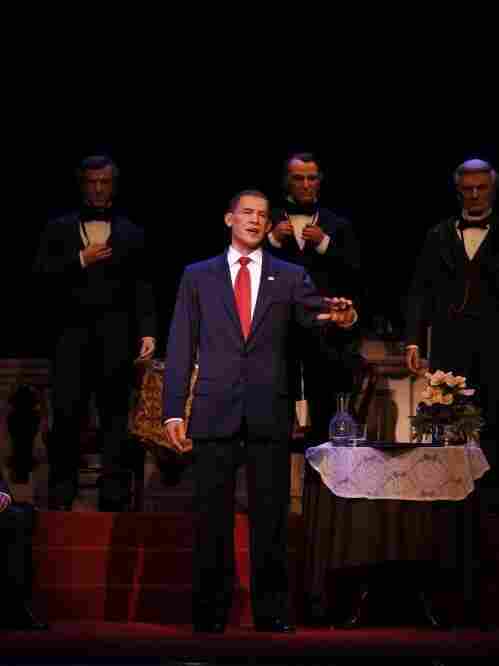 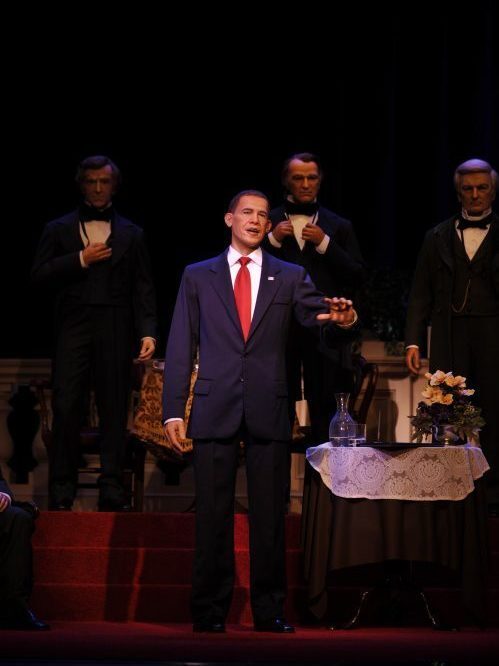 An animatronic figure of President Obama was unveiled at Disney World's Hall of Presidents attraction in 2009.

Second, while some Trump opponents have theorized that the president's animatronic figurine was designed to look atrocious on purpose, as an insult to the president, there is no evidence whatsoever that this is the case.

The Hall of Presidents has a long history of unsatisfying, unsettling or inadequate figurines. Disney's official history of the attraction notes that the initial concept was "too ambitious for the technology of the time," and the first figures "didn't quite look and act as Walt Disney had originally envisioned."

When the exhibit was finally launched in 1971, with new technology, the presidents still looked far better from a distance than in a close-up.

Even Barack Obama's figure in the Hall of Presidents, which debuted in 2009, is far from a picture-perfect portrait.

A previous version of this story misspelled Jon Voight's last name as Voigt.