Accessibility links
Bernard Law, Former Archbishop Of Boston, Dies In Rome At 86 : The Two-Way Once considered among the most influential prelates in America, the archbishop was forced to resign amid the church's growing sex abuse scandal, which indelibly stained his reputation. 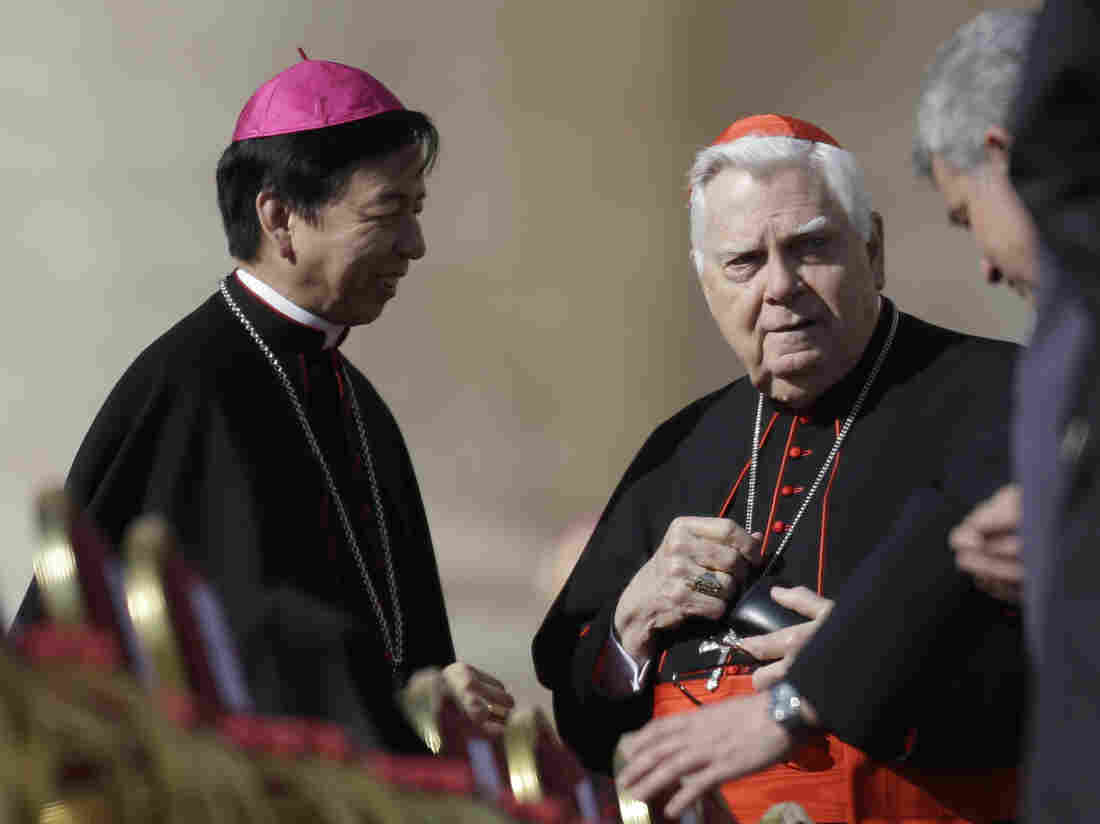 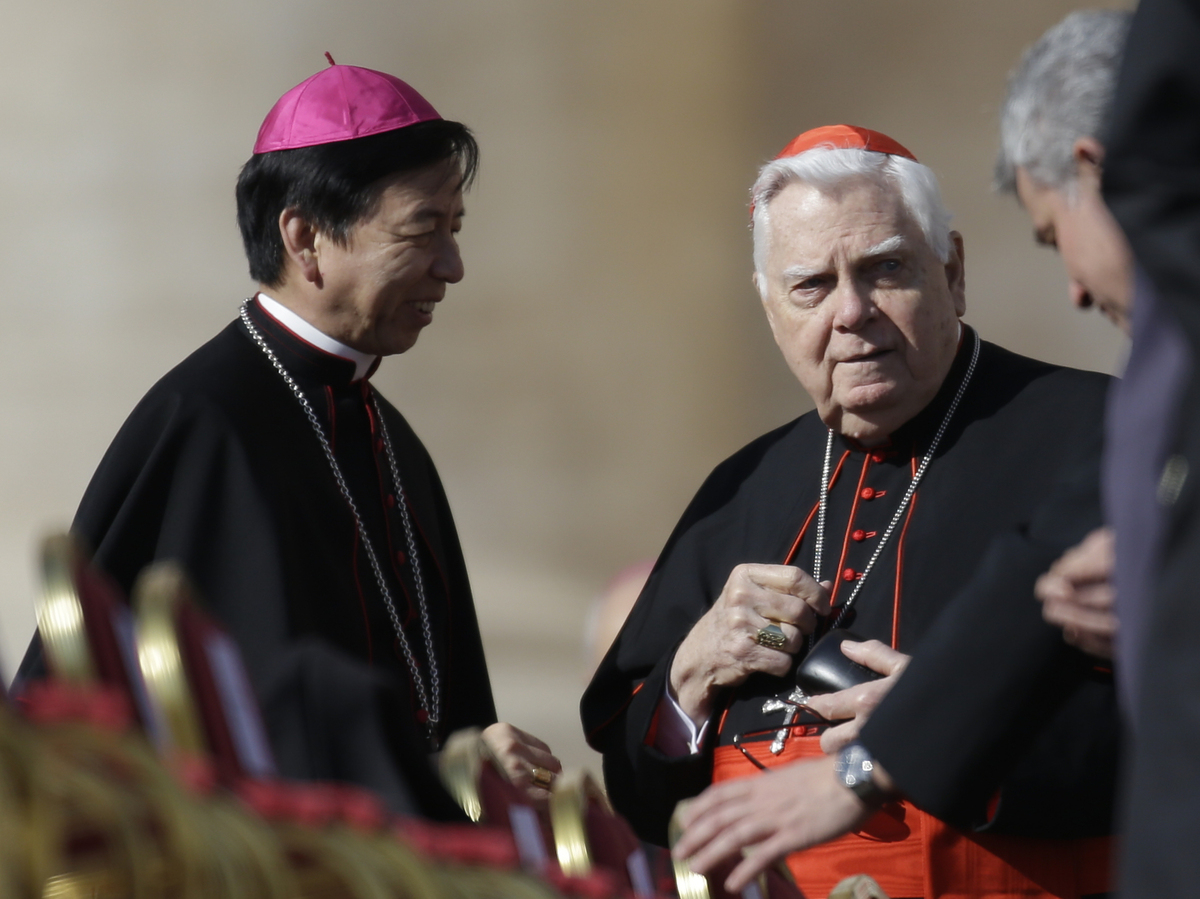 Cardinal Bernard Law, the former archbishop of Boston — once widely seen as America's most influential prelate before resigning in disgrace amid the growing clergy sexual abuse scandal — has died in Rome.

The Holy See's press office confirmed Law's death "after a long illness." He was 86.

In a carefully worded statement, reflecting the ongoing anger at the longtime prelate for his role helping to cover up the sins of pedophile priests, his successor, Cardinal Sean P. O'Malley said, "I recognize that Cardinal Law's passing brings forth a wide range of emotions ...particularly ... all who experienced the trauma of sexual abuse by clergy." He offered "sincere apologies [and] continued prayers and ... support."

O'Malley went on to say, "It is a sad reality that for many, Cardinal Law's life and ministry is identified with one overwhelming reality, the crisis of sexual abuse by priests ... because his pastoral legacy has many other dimensions," from civil rights and ecumenical work, to his care for the poor and immigrants.

The Vatican on Wednesday also released a statement expressing condolences, praying "for the repose of his soul," but making no mention of the clergy's sexual abuse scandal.

Law was at ground zero of the crisis when it exploded in Boston in 2002. He remained the face of the scandal, as it swelled to the tsunami that engulfed the Catholic Church worldwide.

Law's response to the growing crisis only fueled the rage. For example, shortly after the scandal broke, he showed little compunction, issuing a carefully worded, Nixonian concession.

"Judgments were made ... which in retrospect were tragically incorrect," he said. Even as allegations and protests continued to mount, parishioners seethed that Law "still didn't get it."

"These are not easy days to serve in the pastoral role that is mine," he allowed at a special Mass in Boston in April 2002.

It was only after almost a year, when even his own priests were publicly calling on him to quit, that Law did so after 19 years as head of the Boston Archdiocese. Pope John Paul II accepted his resignation.

"To all those who have suffered from my shortcomings and mistakes, I both apologize and from them beg forgiveness," he said in a statement announcing his resignation. "The particular circumstances of this time suggest a quiet departure. Please keep me in your prayers."

It was a shattering fall from grace.

"This was a man who came to Boston with great promise and hope, and people were talking about him being the first American pope," recalled attorney Eric MacLeish, who represented hundreds of clergy abuse victims and made the once-venerated and powerful cardinal squirm through days of depositions.

"He ended up in disgrace," MacLeish said.

Law also left behind parishioners in a crisis of faith, and a church in financial crisis. The archdiocese would ultimately sell some of its most valuable real estate, including the cardinal's residence, to pay about $85 million in settlements to more than 500 victims.

In 2003, Massachusetts Attorney General Thomas Reilly issued a scathing report saying "the mistreatment of children was so massive and so prolonged that it borders on the unbelievable." The report estimated that nearly 800 children had been abused by at least 237 priests over a period of six decades.

"Time after time ... when [senior clergy] were tested ... and faced with the choice between protecting children or protecting the reputation of the church and the priest abusers, they chose secrecy," Reilly said. "In effect, they sacrificed children for many, many years."

While Reilly said the archbishop could not be prosecuted under the weak laws in place at the time, the attorney general said Law "bears the ultimate responsibility" for what happened. Reilly added that Law did not "bear sole responsibility."

Indeed, it would come out later that countless others in the church transgressed as well. But James Post, who founded the lay activist group Voice of the Faithful in response to the scandal, said Law will be remembered for the sins of them all.

"He was the poster child for a church that was in denial and refused to acknowledge the facts of this terrible abuse," said Post.

The scandal eclipses Law's long career as a minister and self-described "meddler" in politics. He was as well-connected in Washington, D.C., as he was in Rome and outspoken on everything from abortion and affordable housing to foreign policy.

He was a staunch advocate for immigrants and the poor and having started his career in Mississippi in the 1960s, he was a champion for civil rights and better race relations. Law was also known for his ecumenical work, building bridges to the Protestant and Jewish communities.

But David G. Clohessy, who was national director of the victims' advocacy group, Survivors Network of those Abused by Priests, or SNAP, said Law's legacy will forever be stained by his failure to protect his flock.

"Bishops' No. 1 goal is to follow the example of Jesus Christ, safeguarding the most vulnerable," he said, fighting back tears more than a decade after the scandal broke.

"I get choked up about this because imagine how this would be different had Cardinal Law said [to church officials] 'You've got to report anything you know or suspect,'" Clohessy said.

Born in Mexico, to an Air Force pilot and a mother who converted to Catholicism, Law was known as a stalwart of Catholic orthodoxy. His desire to guard against dissent led him to be influential in the creation of the Catechism of the Catholic Church.

While he struck many as autocratic and arrogant, Law saw himself as a loyal servant, defending the church and its top-down hierarchy, according to James Bretzke, Boston College professor of moral theology.

"He considered himself to be a prince of the church and responsible for upholding the dignity of the church and protecting it as an institution," said Bretzke. "I think that was part of his overall corporate mentality."

With time, some people are hoping the cardinal will come to be seen in a more sympathetic light, as a product of a different era.

"I personally don't believe he could possibly have been indifferent to the children," said the Rev. Joseph M. Hennessey, who has known Law since the early 1980s, adding that in the priesthood, as in other walks of life, there was a time when people "would be kind of slapped on the wrists, so to speak, for these kinds of crimes."

Law, "like so many people, came to believe that you could just send a priest away to a treatment facility and as long as he came back with a good report, then he was ready to be thrown back into the front lines," Hennessey said. "And then [he] found out the hard way that that didn't work."

Law had barely been seen or heard since he left Boston for the Vatican in 2004, facing potential criminal charges. At the Holy See, he served as archpriest of a basilica until 2011. His last years were likely filled with both pain and penance.

As Boston businessman, philanthropist and former Law confidant Jack Connors, notes, Catholicism teaches that all sins can be forgiven. "I think a lot of us have crossed a bridge here, and forgiven Cardinal Law's decisions that put children in harm's way," he said. "But I don't think any of us are ever going to forget it."

The ultimate judgment, Connors added, will come from a higher authority.

Pope Francis, during his weekly general audience on Wednesday, did not mention Law's passing, but the pontiff "was expected to send an official telegram of condolence later in the day and celebrate Law's funeral Mass, an honor accorded to all Rome-based cardinals," The Associated Press reports.