Accessibility links
Polish President Signs Controversial Laws As EU Triggers Punishment Clause : The Two-Way For two years, the ruling Law and Justice party has worked to solidify political control over the Polish courts. Now the EU is activating a sanctions law that has never been used before. 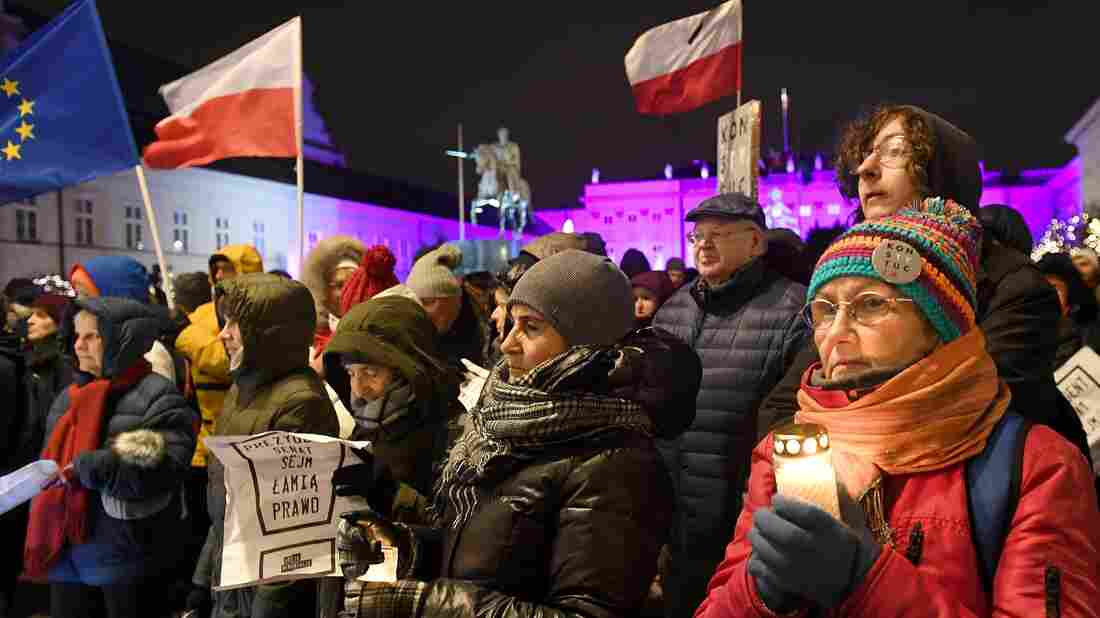 People protest in front of the presidential palace in Warsaw, Poland, earlier this month against controversial moves by the right-wing government that the EU insists undermine the rule of law and separation of powers. Janek Skarzynski/AFP/Getty Images hide caption 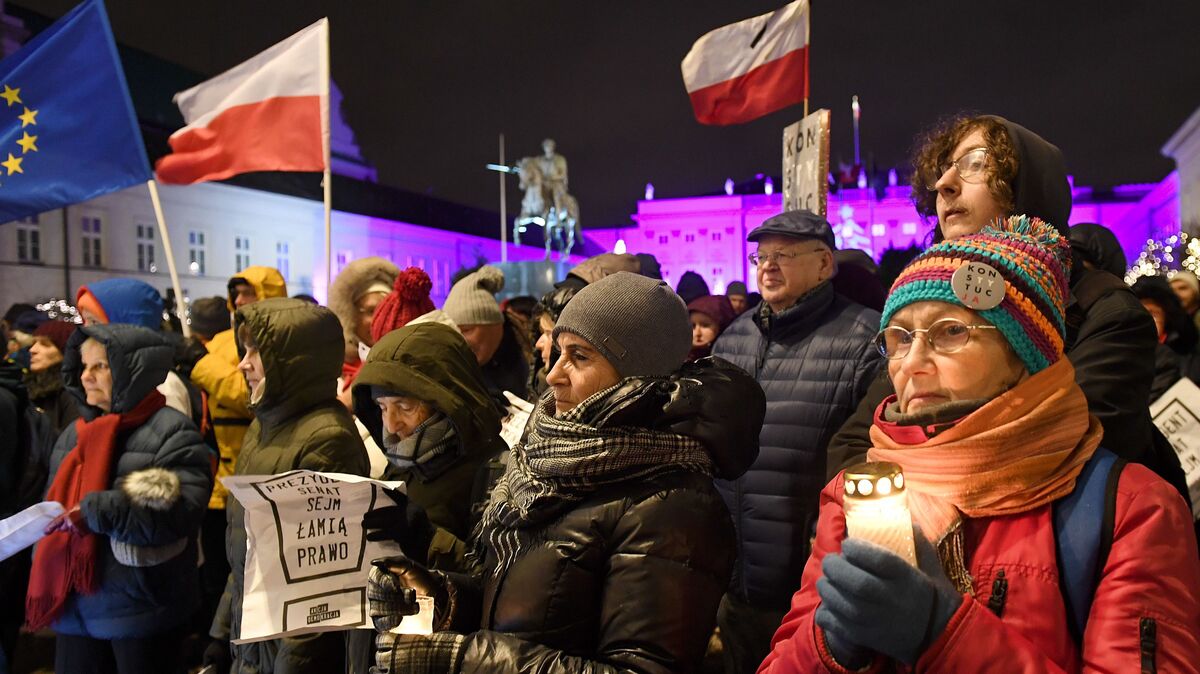 People protest in front of the presidential palace in Warsaw, Poland, earlier this month against controversial moves by the right-wing government that the EU insists undermine the rule of law and separation of powers.

The European Union has taken unprecedented steps toward punishing Poland for a series of laws that have upended the checks and balances of Polish government. Through a never-before-implemented process, Poland could face sanctions, potentially including a loss of voting rights within the EU — although Hungary is expected to block the worst of the repercussions.

Poland's president has signed legislation to solidify political control over Polish courts, after vetoing similar bills this summer. President Andrzej Duda accused EU leaders of hypocrisy and lies when they denounced the measures as undemocratic, The Associated Press reports. He pointed to the political process of nominating judges for the U.S. Supreme Court to defend political control over Poland's courts, the AP writes.

The remarkable step from the EU comes after two years of Poland's ruling party, the Law and Justice party, strengthening its control over the country's judiciary despite the vocal and repeated objections of European authorities.

'There Is A Question Mark Over Poland's European Future Today'

"With no compromise in sight, European Commission Vice President Frans Timmermans says there's no choice but to move ahead with Article 7 of the Lisbon Treaty, which has the power to suspend Warsaw's voting rights," Teri Schultz reports for NPR from Brussels.

The European Commission, the executive arm of the EU, says the action is necessary to "protect the rule of law in Europe."

"Over a period of two years, the Polish authorities have adopted more than 13 laws affecting the entire structure of the justice system in Poland," the commission writes.

"The common pattern is that the executive and legislative branches have been systematically enabled to politically interfere in the composition, powers, administration and functioning of the judicial branch. ...

"[T]he independence of the judiciary — free from undue political interference — is a value that reflects the concept of European democracy we have built up together, heeding the lessons of the past."

The commission gave Poland three months to "address the problems," but Polish leaders have signaled that they have no plans to budge.

"EU member states must now decide by a two-thirds majority whether they agree with the Commission's recommendation to trigger Article 7," Deutsche Welle reports. Brussels is confident it has those votes, The Guardian notes.

If the article is triggered, punitive actions could follow — including, hypothetically, the suspension of voting rights within the European Union.

But suspending voting rights would require unanimity, and, the BBC reports, "Hungary has said it would block such a move."

Bloomberg Politics notes that even if some member states block sanctions through Article 7, EU leaders have other options for putting pressure on Poland:

"As the standoff escalates, EU officials are separately considering limiting access to EU funds in the post-2020 budget for any country that disrespects the bloc's values. Officials in Germany and France, the EU's biggest paymasters, face pressure from taxpayers to make such cutbacks, which could seriously harm Poland, the biggest net beneficiary. The bloc has pledged to deliver a total of 229 billion euros ($271 billion) in aid to Poland through 2021. The money has helped power the Polish economy, contributing as much as a percentage point of growth in GDP each year. ...

" [The Commission] can, and has, referred Poland to the EU's Court of Justice for other infringements of bloc policy. In July, the EU took Poland to the court over its increased logging in the Bialowieza forest ... In December, the commission took Poland, Hungary and the Czech Republic to the court for refusing to comply with EU decisions taken in 2015 to relocate or resettle immigrants."

How did relations between Poland and the EU reach this breaking point?

In November 2015, the euroskeptic, populist and nationalist Law and Justice party found itself controlling both houses of parliament and the presidency. But Poland's Constitutional Tribunal posed a possible check on the party's power. So party leaders introduced changes that would make it far more difficult for the tribunal to overturn a law.

In the two years since, Poland has moved forward with a number of laws allowing greater political control of the judiciary — by pushing judges out and allowing elected leaders to appoint new magistrates, among other things.

As NPR's Colin Dwyer reported in August, the resulting tension with European leadership has been "impossible to miss" on the continent:

"In Warsaw and Brussels, deep in primeval forests and overlooking the soccer pitch, the bad blood between the Polish government and the European Union officials appears to be seeping into just about every evident interaction — and as European Council President Donald Tusk observed Thursday, it's threatening to rend their relationship apart.

" 'There is a question mark over Poland's European future today,' Tusk told reporters outside a prosecutor's office in Warsaw, where the former Polish prime minister was grilled for hours about the 2010 plane crash that killed 96 people, including the country's president at the time, Lech Kaczynski.

"Kaczynski's twin brother, Jaroslaw, now happens to be the most powerful man in Poland. At the head of the conservative Law and Justice party, which holds nationalist views and a deep skepticism toward the European project, Jaroslaw Kaczynski has led the country far to the right and farther from the strictures of the EU, where his domestic rival Tusk holds the reins.

"Late last month alone, Poland defied several commandments from Brussels, plowing ahead with its logging program in the Bialowieza Forest despite an injunction and pursuing controversial reforms that would place its judiciary squarely under presidential control."

In August, as Polish citizens participated in massive street protests against the changes, Duda surprised many onlookers by vetoing two of those controversial measures.

Protests continued into December. But this time, Duda essentially backtracked on his veto, as he signed similar bills into law on Wednesday.

The Associated Press has more background on the EU's decision to censure Poland:

"The developments reflect a dramatic historical reversal for Poland, the birthplace of an anti-communist movement in the 1980s that inspired people across Eastern Europe and has been held up as a model of democratic transition for more than a quarter century. ...

"The procedure carries a number of risks. Targeting Poland could increase anti-EU sentiment ... The move also could expose the EU as largely impotent at a time when it is struggling with other blows to its rationale for existing, including Britain's withdrawal and the huge numbers of migrants stuck in Italy and Greece that the bloc is struggling to relocate.

"Even some of the government's staunchest critics have opposed the step, fearing it will create a sense among some Poles - particularly those who do not understand the complexities of the judicial laws - that they are being targeted unfairly by the EU."