Accessibility links
As Winds Rise Once More, Firefighters Fear 'Flare-Up' In Massive Thomas Blaze : The Two-Way Lately, firefighters had seen a rare lull in the conditions that helped fan the Thomas Fire into the second-largest wildfire in modern California history. The forecast looks far less kind. 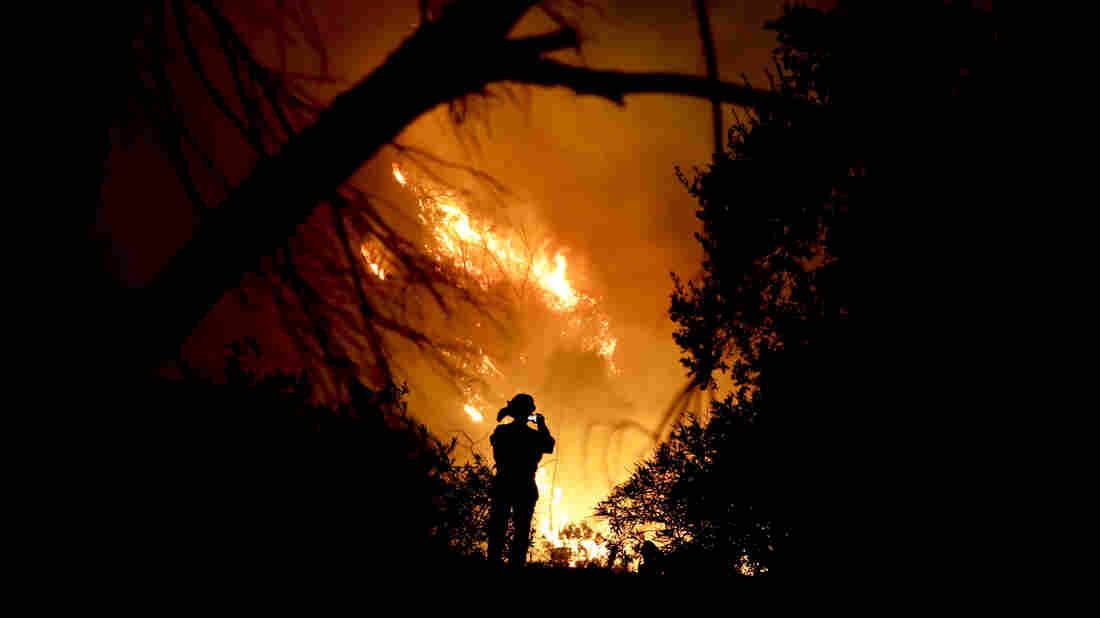 A firefighter snaps a quick picture amid efforts to contain the Thomas Fire in Montecito, Calif., earlier this month. Chris Carlson/AP hide caption 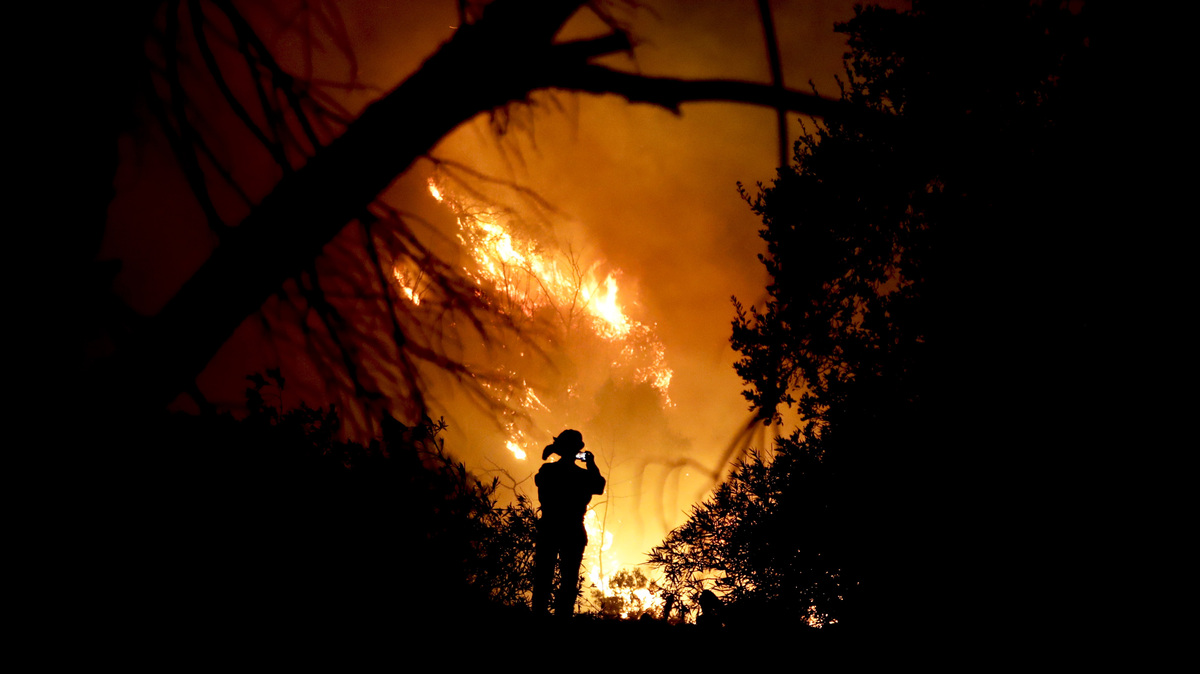 A firefighter snaps a quick picture amid efforts to contain the Thomas Fire in Montecito, Calif., earlier this month.

For the past few days, the weather in Southern California granted firefighters a rare reprieve. Winds dropped, humidity ticked up a tad — and for a brief span, at least, firefighters had a little natural help reining in the massive Thomas Fire northwest of Los Angeles, which they had 60 percent contained by Wednesday morning.

But that lull didn't last long.

The strong winds and low humidity that helped fan the blaze into California's second-largest wildfire on record are returning. In certain areas, winds are expected to reach 15 to 30 mph, with gusts up to 60 mph.

And experts fear the fire's dangerously erratic behavior will return with them.

"There is potential for a flare-up," Joe Sirard, a meteorologist with the local weather service, tells The Los Angeles Times. 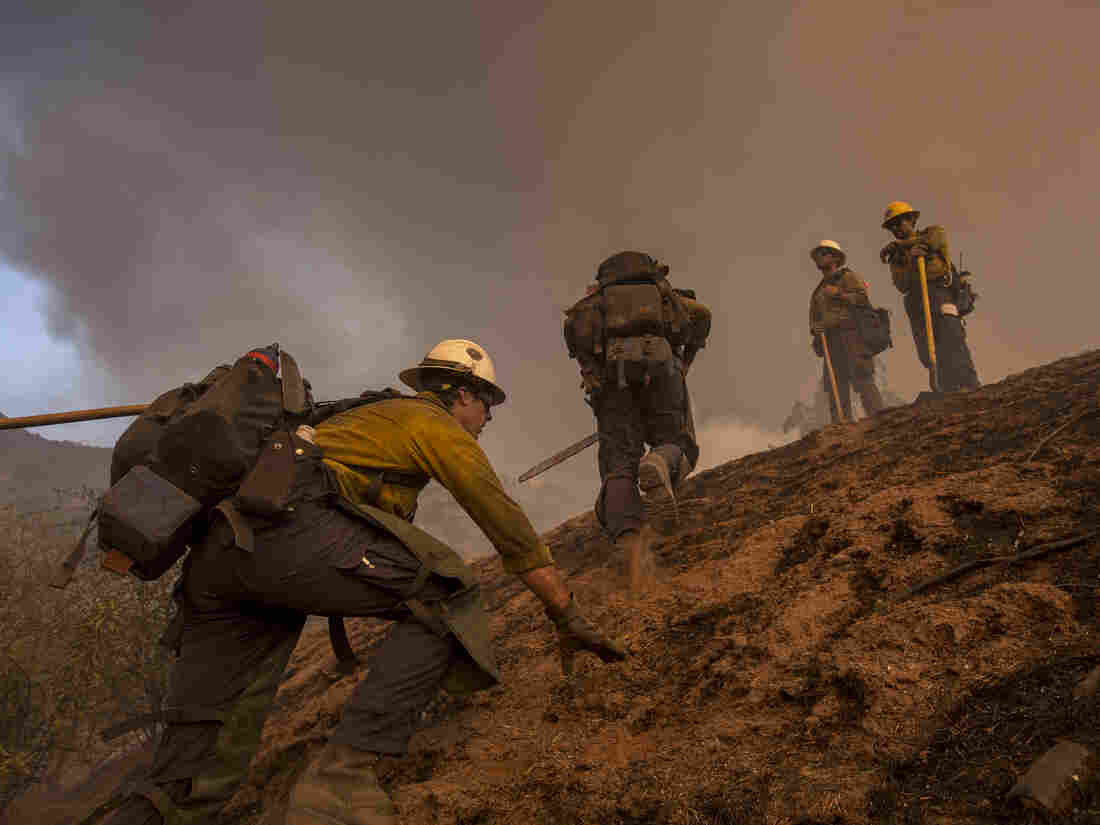 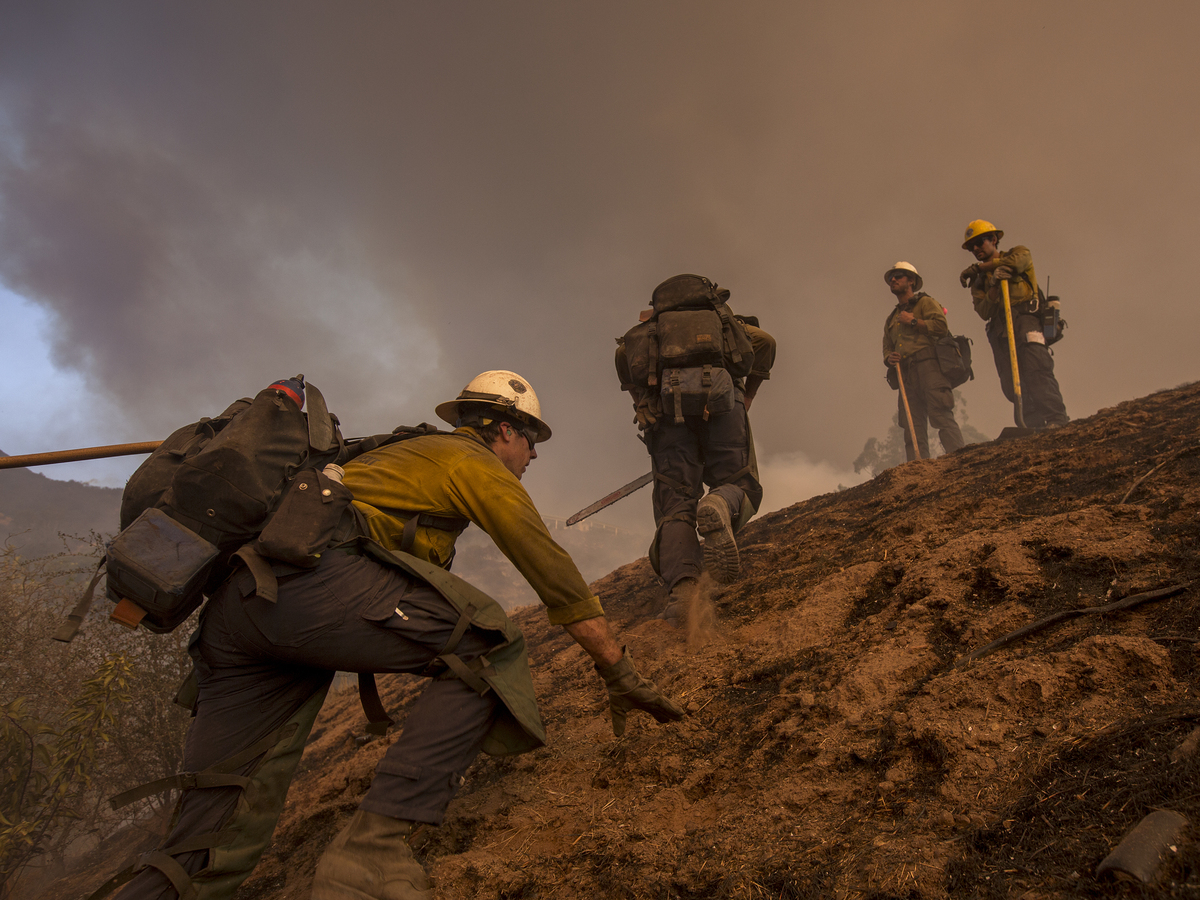 A firefighting crew climbs a steep hill in Montecito, Calif., while battling the Thomas Fire earlier this month.

That is far from good news for residents who have been facing down the angry orange glow of the blaze since it took hold Dec. 4. In the more than two weeks since then, the Thomas Fire has been blamed for two deaths, destroyed at least 750 homes and burned roughly 272,000 acres — or a span larger than all of New York City and Boston combined. Before the fire is finally contained, it is expected to pass the 2003 Cedar Fire as the largest since Cal Fire began keeping such records in 1932.

Member station KPCC reports that "more than 8,000 firefighters from nearly a dozen states" have been gathered to battle the blaze.

After A Wildfire, Making A Holiday Among The Ashes

NBC and The Associated Press note that while the sprawling Thomas Fire is creeping toward a rather notorious perch in history books, it is far from alone. In fact, the blaze is part of an increasing trend:

"Cal Fire reported 6,982 fires in California from Jan. 1 to Dec. 17, including the devastating North Bay fires in October. Those fires scorched more than 505,900 acres, more than double last year's burned acreage count. During that same period in 2016, the state firefighting agency reported 4,759 fires that burned 244,304 acres.

"California's five-year average for wildfires during that time frame is 4,787 and 202,737 acres burned.

"The significant increase in the numbers and size of fires is largely because the state is coming off one of its wettest winters in years in 2016-2017, which left hillsides covered in grass and other vegetation. That grass dried out in summer and turned into tinder, providing fuel for rapidly spreading fires often pushed by strong winds that can carry hot embers for miles and turn small spot fires into infernos.

"The startling number of dead and dying trees also has exacerbated the wildfire threat, Cal Fire officials said. An estimated 129 million trees covering 8.9 million acres have died in California due to drought and bark beetle infestation, according to the USDA Forest Service."