Accessibility links
'A Hideous Milestone In The 21st Century': Cholera Cases In Yemen Pass 1 Million : The Two-Way The International Committee of the Red Cross announced the terrible landmark Thursday, roughly eight months after the outbreak first took hold in the war-ravaged country. 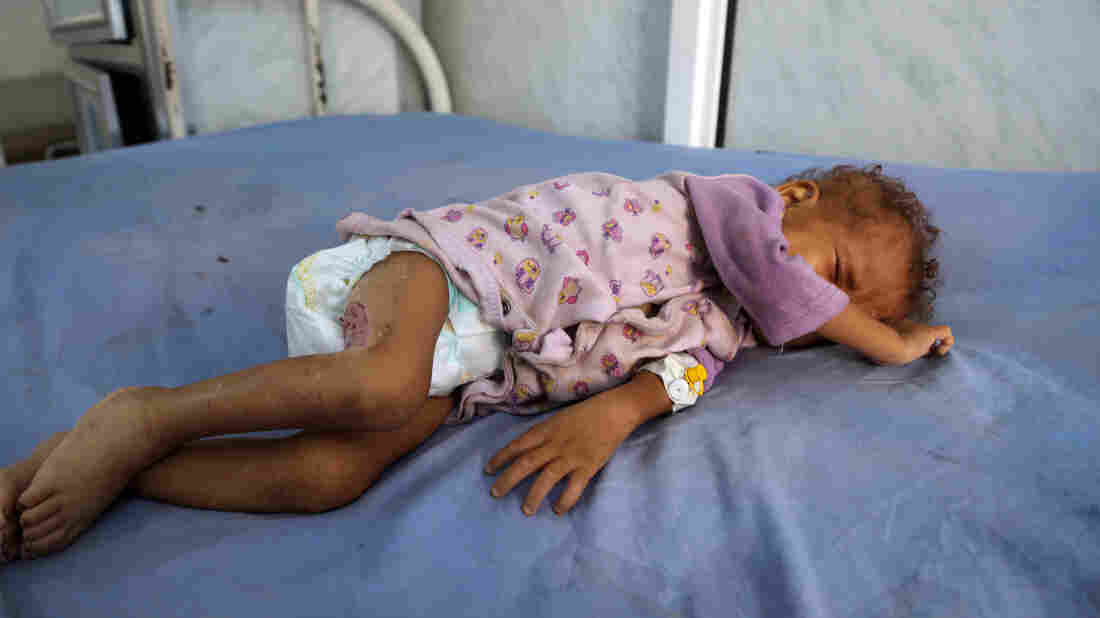 A malnourished Yemeni child receives treatment at a hospital in the port city of Hodeidah on Tuesday. Ravaged by cholera, famine and war, the country has been declared the world's worst humanitarian crisis — and there is little indication the dire situation there is improving. Abdo Hyder/AFP/Getty Images hide caption 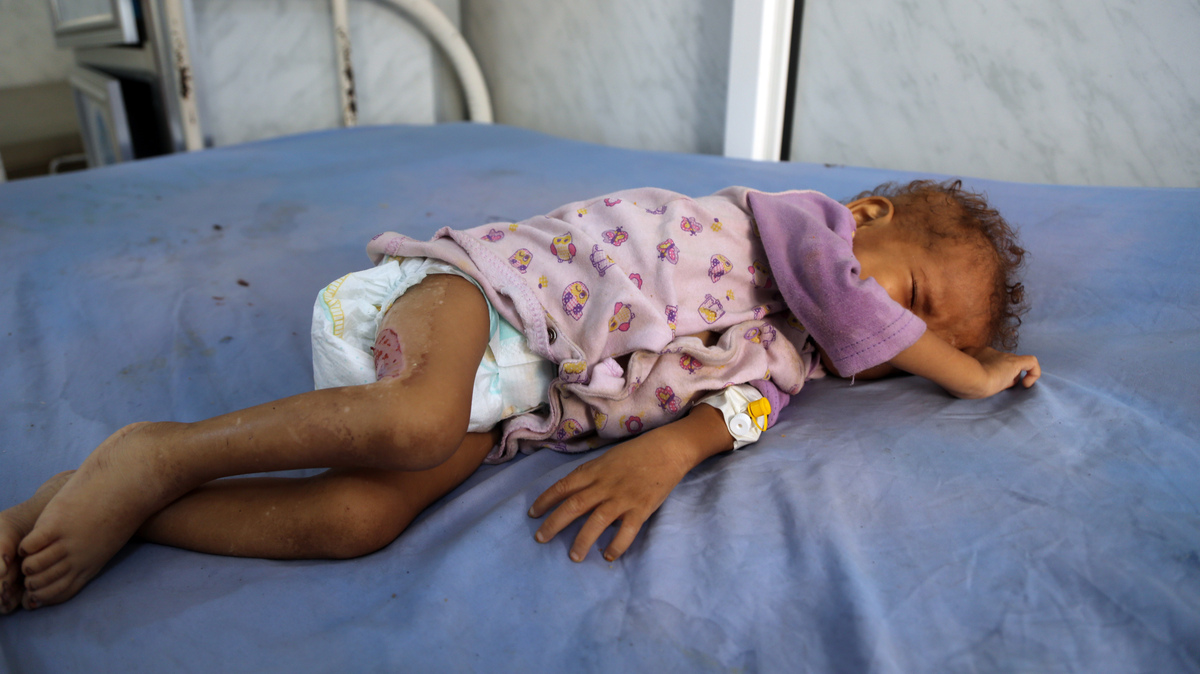 A malnourished Yemeni child receives treatment at a hospital in the port city of Hodeidah on Tuesday. Ravaged by cholera, famine and war, the country has been declared the world's worst humanitarian crisis — and there is little indication the dire situation there is improving.

It has been roughly eight months since cholera first took hold in war-torn Yemen. In that brief span, the waterborne disease has exacted a staggering toll on the country's population — and that toll only continues to rise by the day.

The number of suspected cases of cholera has crossed one million, the International Committee of the Red Cross announced Thursday. Of those who have contracted the disease since April, the World Health Organization believes more than 2,200 people have died of it — almost a third of whom are children.

In its announcement on Twitter, the ICRC was left nearly speechless, elaborating on its confirmation with just three words: "This is devastating."

The centuries-old disease can kill someone within hours — but under most circumstances, it should not. It is both preventable and treatable with adequate medical treatment. "A patient with cholera should never die," Dr. David Sack of Johns Hopkins University told NPR's Jason Beaubien earlier this year. "If they get to a treatment center in time, if they still have a breath, we can save their life."

Yet years of war and eroding infrastructure have left Yemen teetering on the brink of an abyss.

Since 2015, a Saudi-led coalition supported by the U.S. has conducted an airstrike campaign to dislodge the Houthis, an Iran-backed rebel group that seized large expanses of the country, including the capital. Caught between the warring sides have been the Yemeni civilians, who have suffered as the violence disrupted food supplies, undermined access to clean water and diminished the capacity of medical facilities — when they've managed to stay open at all. The British Red Cross reports less than 45 percent of them are still operational in the country.

The resulting devastation has led to what major international aid groups are calling the "worst humanitarian crisis in the world": more than 10,000 people killed in the violence since its escalation, more than 8 million people near famine, a burgeoning diphtheria outbreak and more than 80 percent of the population without adequate access to food, fuel, clean water and health care.

And through it all, the suspected cases of cholera continue to mount.

With treatment, the number of people who have died from the disease remains very low compared with those who have contracted it — which is cause for optimism, Johan Mooij of CARE told NPR earlier this month.

How Bad Are Things In Yemen? We Asked An Aid Worker Holed Up In A Basement

"But there's one major condition: You need clean water," he added. "If there's no fuel coming into the country to make the water pumps work, then people will have to go back to filthy water again. That will make cholera increase again."

As the ICRC's tally makes clear, such an increase would only add to what is already a devastating number in an era when cholera is "a totally preventable and treatable disease."

To have hit one million cases already, and in such a short time, the ICRC said Thursday, is "a hideous milestone in the 21st century."