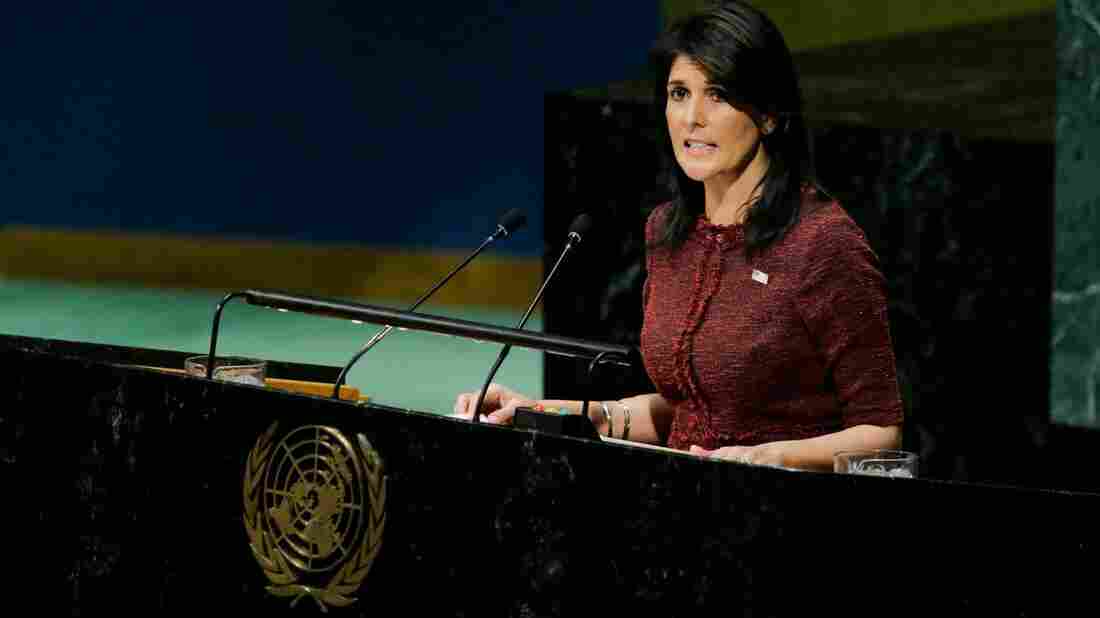 U.S. Ambassador to the U.N. Nikki Haley told the General Assembly on Thursday: "To its shame, the United Nations has long been a hostile place for the state of Israel." Eduardo Munoz Alvarez/AFP/Getty Images hide caption 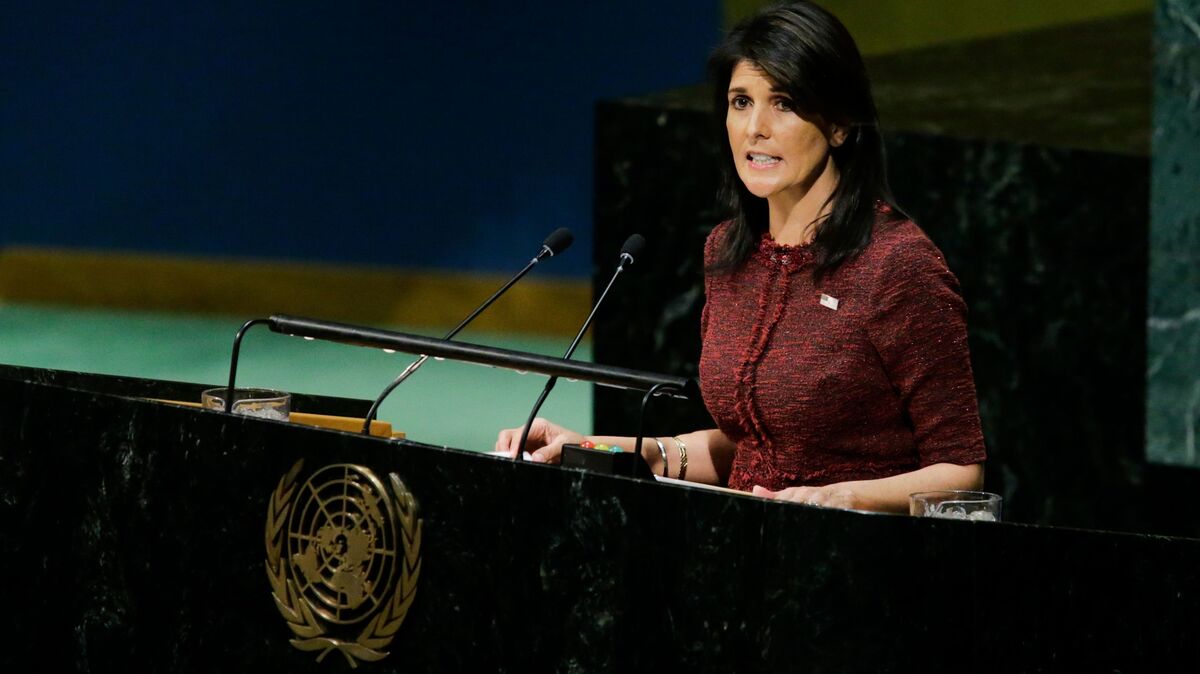 U.S. Ambassador to the U.N. Nikki Haley told the General Assembly on Thursday: "To its shame, the United Nations has long been a hostile place for the state of Israel."

The United Nations General Assembly has overwhelmingly rejected the Trump administration's decision to recognize the disputed city of Jerusalem as Israel's capital. By a 128-9 vote Thursday, the diplomats gathered in New York City ignored U.S. objections and approved a nonbinding resolution calling on countries to avoid moving their embassies to Jerusalem.

Among the countries that voted in favor of the resolution are many traditional U.S. allies, including the United Kingdom and France. Israel, which celebrated Trump's decision earlier this month, joined the U.S. in voting against the measure. Thirty-five countries abstained, including U.S. allies Canada and Australia.

128 countries voted in favor of the resolution rejecting President Trump's recognition of Jerusalem as Israel's capital, 9 voted against, 35 abstained.

How each country voted: pic.twitter.com/rXLi2CjBmQ

Earlier in the day, before the assembly voted on the largely symbolic declaration, U.S. Ambassador to the U.N. Nikki Haley expressed her resistance in no uncertain terms.

"The United States will remember this day in which it was singled out for attack in the General Assembly for the very act of exercising our right as a sovereign nation," Haley said Thursday.

U.S. 'Will Be Taking Names' Of U.N. Votes On Jerusalem Resolution

President Trump announced earlier this month his administration's decision to recognize Jerusalem as the Israeli capital and begin the process of moving the U.S. Embassy to the disputed city. The move bucked decades of U.S. diplomatic policy and fulfilled a key campaign promise — but it also immediately set off a widespread backlash in countries around the world, who believe it would significantly undermine the peace process between Israel and the Palestinians, who also claim Jerusalem as the capital of a prospective state.

As Israel lauded the move, the country's Arab neighbors condemned it as a violation of an international resolution that forbids attempts "to alter the character and status" of the city before the peace process has concluded. And beyond the Middle East, countries across the West quickly reiterated that their own embassies would not move from their present locations in Tel Aviv.

Meanwhile, in the Palestinian territories, protests escalated into clashes between demonstrators and Israeli authorities. And rocket fire from the Gaza Strip was answered with Israeli airstrikes.

The U.N. Security Council sought earlier this week to vote on a measure that would have demanded that states refrain from placing their diplomatic missions in Jerusalem. Without naming the U.S. or Trump, the resolution nevertheless would have proclaimed Trump's decision null and void. Every country on the council, including U.S. allies, voted for the measure Monday — but the U.S., which holds veto power, blocked the vote.

As NPR's Daniel Estrin notes, the Palestinian delegation would not let the matter rest there. "With this U.N. vote [Thursday], the Palestinians want to show the U.S. that the majority of the world backs their positions," he told Morning Edition.

"And it's part of a bigger diplomatic move that the Palestinians are making to sideline the U.S. in the peace process. They think America has taken Israel's side on the sensitive issue of Jerusalem."

Haley, for her part, decried what she sees as building anti-Israeli sentiment in the U.N.

"To its shame, the United Nations has long been a hostile place for the state of Israel," Haley told the General Assembly on Thursday. "It's a wrong that undermines the credibility of this institution and that, in turn, is harmful for the entire world.

Israeli Prime Minister Benjamin Netanyahu applauded the U.S. vote — and named Haley specifically in his praise Thursday: "Thank you, President Trump and Ambassador Haley, for standing up for Israel and standing up for the truth," he said. "Ultimately, the truth will prevail."

Yet the members of the assembly overwhelmingly lined up against the two countries — and several explicitly rejected the pressure Haley and Trump had been seeking to exert on them, including Haley's threat that she'll take note of "those countries who vote against us."

A previous version of this story stated that Canada voted in favor of the resolution. In fact, Canada abstained from the vote.