Accessibility links
Another Famous Conductor, Charles Dutoit, Accused Of Sexual Assault : The Two-Way Charles Dutoit has been accused by four women of sexual assault in incidents that allegedly occurred between 1985 and 2010. 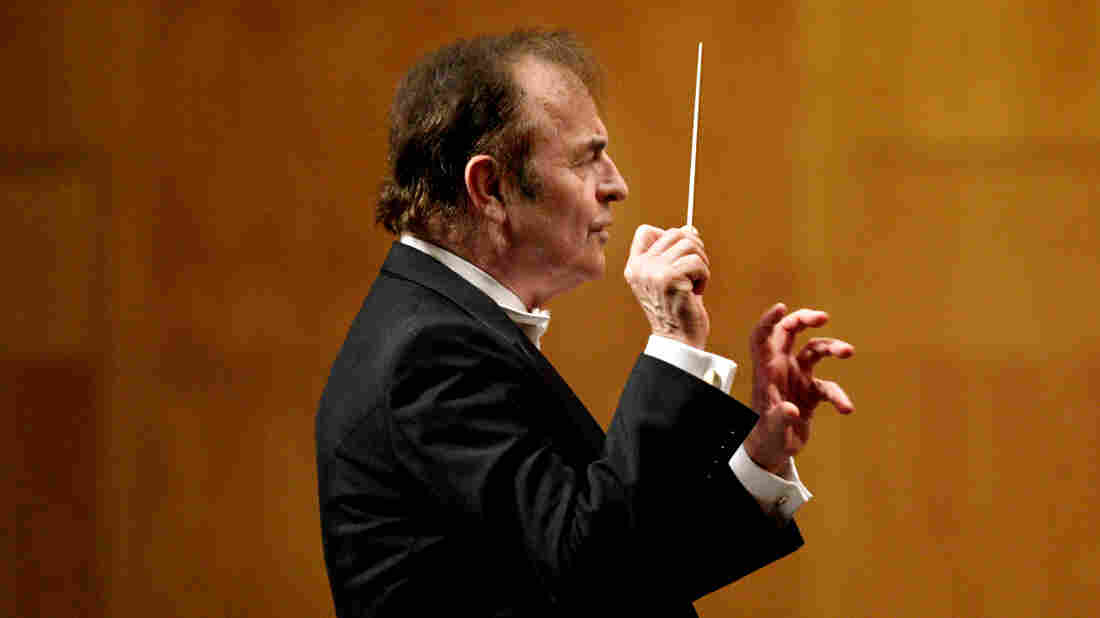 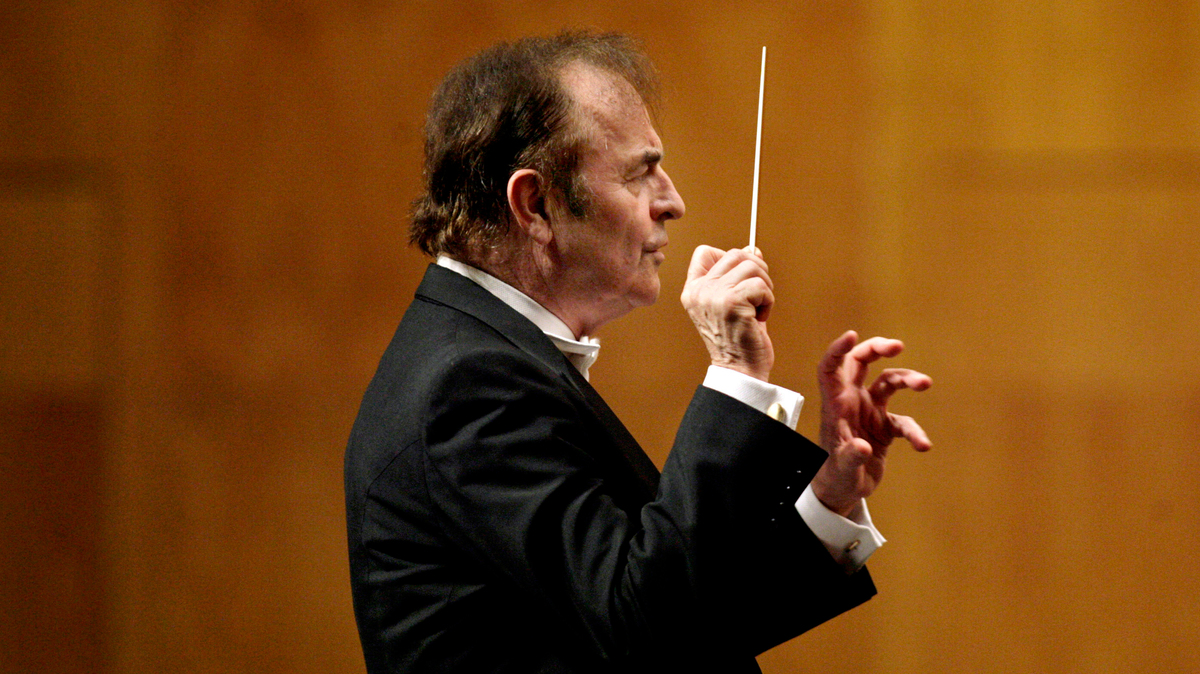 Charles Dutoit, conducting the Royal Philharmonic orchestra during a tour of Spain in 2006.

The Associated Press has reported allegations of sexual assault against the famed conductor Charles Dutoit made by four women, in incidents that span from 1985 to 2010 and that took place in five different U.S. cities.

In Britain, the Royal Philharmonic Orchestra also responded to the allegations, writing in a statement that it and Dutoit have " jointly agreed to release him from his forthcoming concert obligations with the Orchestra for the immediate future."

The alleged victims include one world-famous vocalist, the Grammy winning-soprano Sylvia McNair. Now 61, McNair told the AP that Dutoit "tried to have his way" with her after a rehearsal at the Minnesota Orchestra in 1985, when she was 28 years old.

Paula Rasmussen, a former professional mezzo-soprano, alleges that Dutoit assaulted her in his dressing room at the Los Angeles Opera in September 1991.

The other two accusers chose to remain anonymous, due to Dutoit's still-significant power within the classical music world.

One of those women, an anonymous soprano, claims that Dutoit assaulted her three times in 2006, at the Saratoga Performing Arts Center in Saratoga Springs, N.Y., and again in Philadelphia, in 2010.

The fourth accuser was 24 years old at the time of her alleged assault. She was a musician at the Civic Orchestra of Chicago, a "training" orchestra for emerging professional players associated with the Chicago Symphony Orchestra (CSO), when Dutoit came to the city as a guest conductor of the CSO. She says he invited her to a lunch originally scheduled at a restaurant but then changed, at Dutoit's request, to his hotel suite at the Four Seasons, where he tried to force himself on her. In a series of emails the conductor allegedly sent to her afterwards, he wrote that he did not know that "that an affectionate hug and kiss could have such a negative effect," but that "of course, I forgot you are still a child."

The women's stories were corroborated by friends and colleagues, who told the AP that the four had shared details about the incidents with them at the time. All four of the women told the AP that they were emboldened by the #MeToo movement, particularly after four men publicly accused another high-profile conductor, James Levine, of sexual misconduct.

Dutoit has been married four times, including most famously to the pianist Martha Argerich; his wife since 2010 has been violinist Chantal Juillet.

According to the AP, Dutoit has not responded to multiple attempts to reach him through various offices and institutions.

The Philadelphia Orchestra — which Dutoit has conducted some 650 times since 1980 — said in a statement this evening that it was "horrified to learn of the deeply troubling accusations of sexual misconduct against Charles Dutoit. We had no knowledge of these allegations. The Association is committed to providing a safe and respectful work environment for all of its employees and guest artists. We have had no communication with Mr. Dutoit and he has no future engagements." The Philadelphia symphony added, "We deplore the type of behavior described by Mr. Dutoit's accusers and we recognize
our responsibility to be a forceful opponent of abuses of power. The seriousness of the accusations demands a thorough investigation. We offer our sincerest sympathy to those who have been impacted."

Dutoit's upcoming U.S. performances were largely tied to a series of appearances with pianist Jean-Yves Thibaudet, a longtime musical colleague: with the New York Philharmonic at Lincoln Center and with London's Royal Philharmonic Orchestra in a tour of California next month; with the Boston Symphony Orchestra at Boston's Symphony Hall and with the Cleveland Orchestra at Cleveland's Severance Hall in February; and with the Chicago Symphony in April at the city's Symphony Center.

Thibaudet declined to comment on the allegations against Dutoit.

Rather than make any declarations about future collaborations with Dutoit — or about anyone in the Philharmonic administration or orchestra's knowledge of his alleged behaviors — the New York orchestra released a brief statement Thursday night that said: "In the wake of the very serious allegations reported today about conductor Charles Dutoit, Mr. Dutoit informed the New York Philharmonic that he has withdrawn from conducting concerts for the New York Philharmonic scheduled for January 17–20, 2018. The New York Philharmonic remains committed to providing a professional and safe workplace, free of sexual harassment and all other forms of inappropriate conduct."

After an initial statement in which the Chicago Symphony said it was taking the allegations seriously and was still determining the best course to follow, the CSO ultimately took a similar tack to the New York Philharmonic. In a terse statement, the CSO said: "In response to the allegations about conductor Charles Dutoit reported in the media today, Mr. Dutoit informed the Chicago Symphony Association (CSOA) that he has withdrawn from conducting concerts with the Chicago Symphony Orchestra scheduled for March 8, 9, 10 and 11, 2018 and April 5, 6, 7 and 10, 2018. The CSOA is committed to maintaining a workplace that is free from intimidation, coercion and harassment, including sexual harassment."

Also Thursday, the Boston Symphony Orchestra, which was scheduled to feature Dutoit as a guest conductor in a series of February performances, released a statement severing its decadeslong ties with the conductor: "Given the extremely troubling allegations against Charles Dutoit reported by Associated Press this morning, the Boston Symphony Orchestra will end its relationship with him and he will no longer appear as a guest conductor with the orchestra. The Boston Symphony Orchestra is committed to a zero tolerance policy towards anyone who exhibits inappropriate behavior in the workplace, and behavior that runs counter to these core values will always be met with serious consequences." The BSO statement echoes the one the same orchestra released earlier this month regarding its relationship with James Levine, its former music director who also led the Metropolitan Opera for more than four decades.

The Cleveland Orchestra also issued a brief statement of its own Thursday evening saying that Dutoit would not be appearing in February: "As a result of the serious allegations reported today about conductor Charles Dutoit, Mr. Dutoit informed The Cleveland Orchestra that he has withdrawn from leading concerts scheduled for February 22, 23, 24, 2018. While we are not aware of any specific complaints related to Mr. Dutoit during his previous engagements with The Cleveland Orchestra, we are completely committed to providing a professional and safe workplace devoid of all forms of inappropriate conduct. The concerts in February remain scheduled with a replacement conductor to be announced at a later date."

This cluster of announcements today marks an extraordinary moment in American musical life: all of the U.S.'s traditional "Big Five" symphony orchestras — Boston, New York, Philadelphia, Cleveland and Chicago — have been forced to begin to publicly address elements of the #Metoo movement, and to grapple with the impact of specific accusations against a conductor whose alleged actions may color audiences' — and patrons' — feelings about their respective cultural institutions.

In a similar move to the Boston Symphony Orchestra, the San Francisco Symphony issued a strongly worded statement Thursday, saying that the orchestra "has severed all ties with Charles Dutoit in response to allegations of sexual misconduct that have been brought against the conductor. This decision is the result of the serious nature of the allegations, internal and external discussions, and the San Francisco Symphony's strong commitment to a zero tolerance policy for sexual harassment in the workplace."

The California orchestra continued, "Charles Dutoit was scheduled to conduct the San Francisco Symphony in two weeks of concerts in April, including a program of music by Debussy and Ravel, and a program including Holst's The Planets. A new conductor for these concerts will be announced at a later date. Dutoit was also scheduled to conduct the Royal Philharmonic Orchestra on tour in January as a part of the Orchestra's Great Performers Series. He will not be appearing in Davies Symphony Hall for these concerts."

In its public stance, the Royal Philharmonic Orchestra in London seems to be hedging its bets, according to a report published Thursday in the Telegraph: "The Royal Philharmonic Orchestra (RPO) confirmed it would be speaking to Dutoit whenever possible but said it had received no complaints or claims of inappropriate behavior relating to his work with the orchestra."

The British paper quoted the RPO as saying, "Based on the information available to us, these allegations were issued without reaction from Mr. Dutoit and, to the best of our knowledge, the claimants have initiated no formal legal proceedings." But the statement as reported by the Telegraph continued: "Nonetheless, we take this matter very seriously and we will be monitoring the situation closely. As a leading international ensemble, the RPO is committed to the highest standards of ethical behaviour, which it expects from everyone that works with the Orchestra. The Royal Philharmonic Orchestra takes very seriously its responsibility to maintain a safe working environment."