Accessibility links
Finding A Legal Loophole, Memphis Takes Down Its Confederate Statues : The Two-Way To skirt a state law prohibiting the monuments' removal, the city sold two of its parks to a new nonprofit. "In all of my life in Memphis, I've never seen such solidarity," said Mayor Jim Strickland. 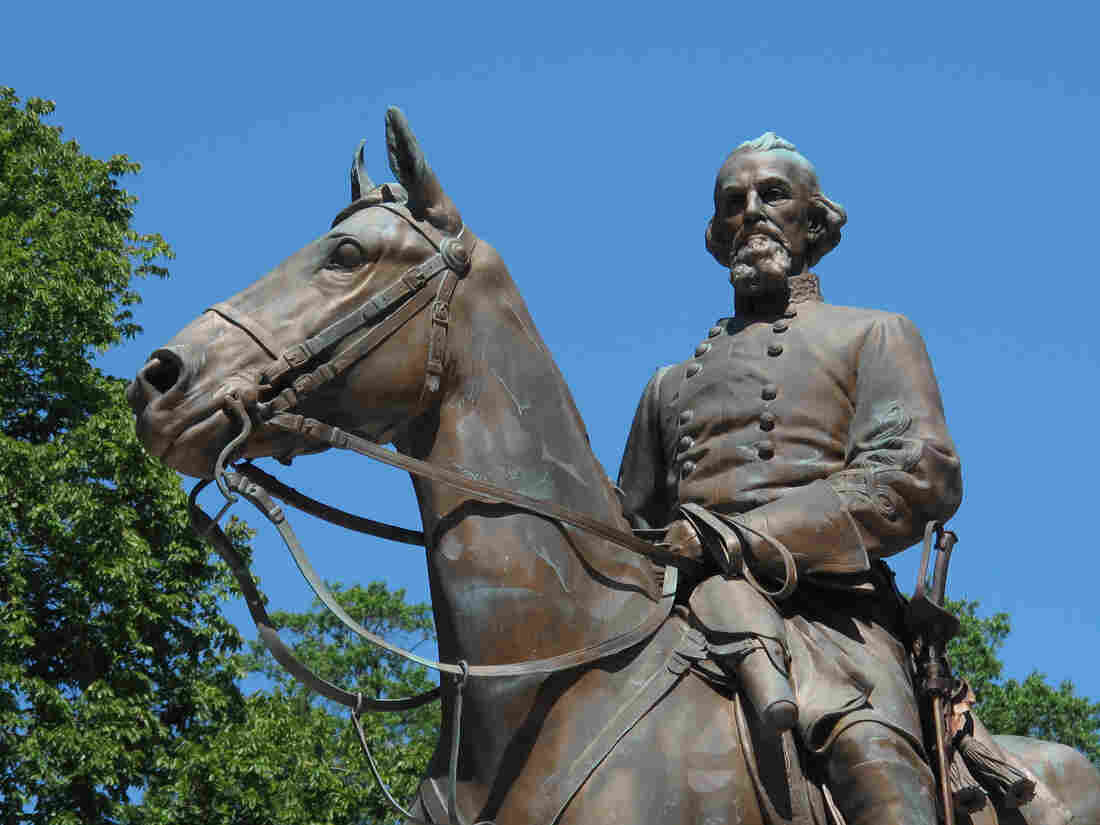 This statue of Confederate Gen. Nathan Bedford Forrest was removed from a park in Memphis, Tenn., on Wednesday night, following the sale of the park to a nonprofit group. Adrian Sainz/AP hide caption 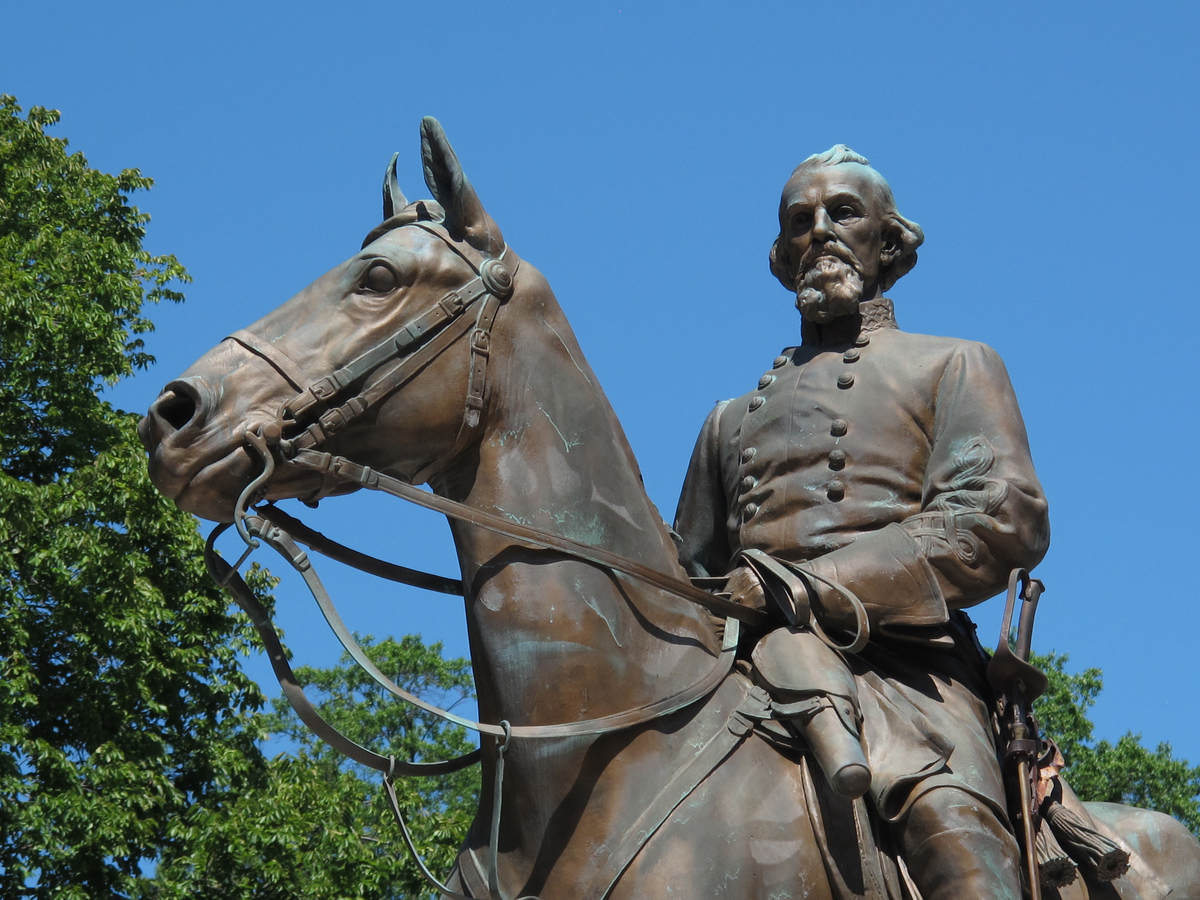 This statue of Confederate Gen. Nathan Bedford Forrest was removed from a park in Memphis, Tenn., on Wednesday night, following the sale of the park to a nonprofit group.

It was a long time in the making, but when the statues of Confederate figures finally came down in Memphis, Tenn., it was quick work.

On Wednesday, the city sold two of its city parks – one with a statue of Confederate President Jefferson Davis, the other featuring a statue of Gen. Nathan Bedford Forrest on horseback — for $1,000 each.

That night, work crews lifted the statue of Forrest from its base. Crowds of onlookers cheered the move, which was timed to occur at 9:01 p.m. — a nod to the Memphis area code and the group Take 'Em Down 901, which has been pushing for the statues' removal.

"This is a victory for grass-roots movements in the city," said the group's leader, Tami Sawyer.

Raw reaction from @tamisawyer after the city removed the Nathan Bedford Forrest Statue in Health Sciences Park. Sawyer leading this movement and fighting for this to happen before we commemorate 50 years since the assassination of MLK in April. @3onyourside pic.twitter.com/Re3XzTawja

The statues' removal had been a goal of Mayor Jim Strickland, particularly before the city commemorates in April the 50th anniversary of the killing of Martin Luther King Jr. in Memphis.

Selling the parks to a private entity allowed the city to skirt the Tennessee Heritage Protection Act, passed in 2013 and amended in 2016, which prohibits the removal, relocation or renaming of a memorial that is on public property.

"It's important to know why we're here," he wrote. "The Forrest statue was placed in 1904, as Jim Crow segregation laws were enacted. The Davis statue was placed in 1964, as the Civil Rights Movement changed our country. The statues no longer represent who we are as a modern, diverse city with momentum. As I told the Tennessee Historical Commission in October, our community wants to reserve places of reverence for those we honor."

He said the city had sought a waiver from the Tennessee Historical Commission, but its request was denied, and subsequent mediation had not been successful. "I was committed to remove the statues in a lawful way. From the beginning, we have followed state law — and tonight's action is no different," Strickland wrote.

A nonprofit organization called Memphis Greenspace Inc. filed for incorporation in October. And on Wednesday, the city council authorized Strickland to sell the two parks to the new organization. With the parks now in private hands, its owners were allowed to remove the Forrest and Davis statues, which were moved to an undisclosed location.

The nonprofit group is led by Shelby County Commissioner Van Turner. It received about $250,000 in pledges and donations from supporters, the Memphis Commercial Appeal reports, and will now maintain the parks.

The move did not sit well with Republicans in the Tennessee House, who called for an investigation on Thursday.

"We are governed by the rule of law here in Tennessee and these actions are a clear infringement of this principle and set a dangerous precedence for our state," House Majority Leader Glen Casada and House Republican caucus chairman Ryan Williams wrote in a statement, according to the Commercial Appeal.

Among the questions the lawmakers will be asking is whether the city violated sunshine laws by coordinating the sale to a private company and whether anyone was set to gain personally by selling properties at a lower-than-market price.

But Thursday, the mayor and the many city residents who wanted to the statues to go were jubilant.

"In the days after the August events in Charlottesville, we saw an avalanche of support come together behind our efforts," the mayor wrote. "In all of my life in Memphis, I've never seen such solidarity."