Accessibility links
Cities Across The U.S. Honor 'Homeless Persons' Memorial Day' : The Two-Way On Thursday — the longest night of the year — organizations across the country gathered to remember the often overlooked deaths of people who had no place to go. 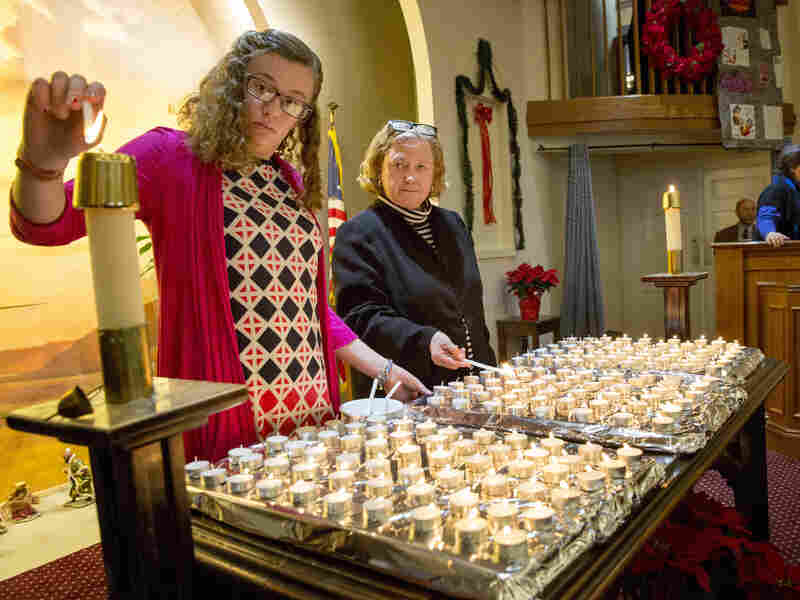 In Los Angeles, Cleveland, Boston and other communities across America, people gathered on Thursday to honor the lives of the homeless people who died in 2017.

Dec. 21 — the winter solstice, the day with the longest night of the year — was named as the 2017 National Homeless Persons' Memorial Day by several advocacy groups.

The gatherings are not arranged by any central organization. "Anyone can coordinate an event," from city representatives to students, the National Coalition for the Homeless writes.

Nearly 100 events were registered with the nonprofit.

Vigils Honor The Homeless Who Died As They Lived: On The Streets

The nature of the memorial varies, the National Health Care for the Homeless Council, writes, but "the events often include readings of names, candles, prayers, personal remembrances, marches, and moments of silence. They are often held outdoors, sometimes – fittingly – in the bitter cold."

The lists of names are often partial, based on informal reports from a community rather than any official list. As the Chicago Sun-Times notes, many homeless people's deaths go largely unnoticed.

"They pass quietly, often out of sight, their deaths more likely an unconfirmed rumor to those who knew them on the street than the basis for a news story," the paper writes. "Many never get a funeral. Some of their bodies go unclaimed at the morgue."

In Chicago, there were 33 names on the list this year, the Sun-Times says. "Where possible, the organizers try to include at least a sentence about each person," the Sun-Times notes:

"Marcus Faleti, an alcoholic who froze to death at age 58 in Wicker Park in early January, will be remembered as someone who 'loved reading the Sun-Times and Wall Street Journal.'

"Moriah Ishmael will be honored as 'someone who was very respectful and a joy to be around. All Moriah wanted was a place to call his own.'

"Will Kelly 'was a good friend who helped many people.'

"Wesley Sharp 'was a kind, respectful and patient man' who will be 'missed dearly by friends.' "

In Cleveland, 61 people were honored this year, including two who were found dead last week, the Plain Dealer reports.

In Los Angeles, a formerly homeless man named Tim Houchen has worked to expand the memorial to include multiple art exhibits and a military tribute for deceased homeless veterans, The Los Angeles Times reports.

This year, the list of the lost lives recited at the Los Angeles event will be more than 200 names long.

"I suffer from survivor's guilt," Houchen told the Times. "I was fortunate to get into permanent supportive housing. At the same time, I had friends — their images pressed in my mind. These guys, they needed a place just as bad if not more than me. I am the lucky one.

"If they'd been given the same opportunity, I can't help but think some of those 200 folks would have lived."

"At the start of the memorial service, Warren, the organizer, noted that winter can be an especially difficult time for those living outside.

" 'We know that there's going to be folks sleeping out there in the cold, dying and getting sick, and it doesn't have to be that way,' Warren says.

"Warren and others are pushing for more funds to provide housing for the homeless, although in cities like Washington, where rents are soaring, it's hard to keep up with the demand.

"No one really knows how many homeless individuals die each year, but about 2,700 were expected to be commemorated this year at similar events across the country this week. The homeless memorials have been held for more than 25 years. Each year, organizers say they hope it's the last."