Accessibility links
A Bay Glows Again In Puerto Rico : The Two-Way Hurricane Maria wreaked havoc on Vieques, an island 8 miles off the coast of Puerto Rico. Its bioluminescent bay, a lifeline for its vital tourism industry, is starting to show signs of recovery. 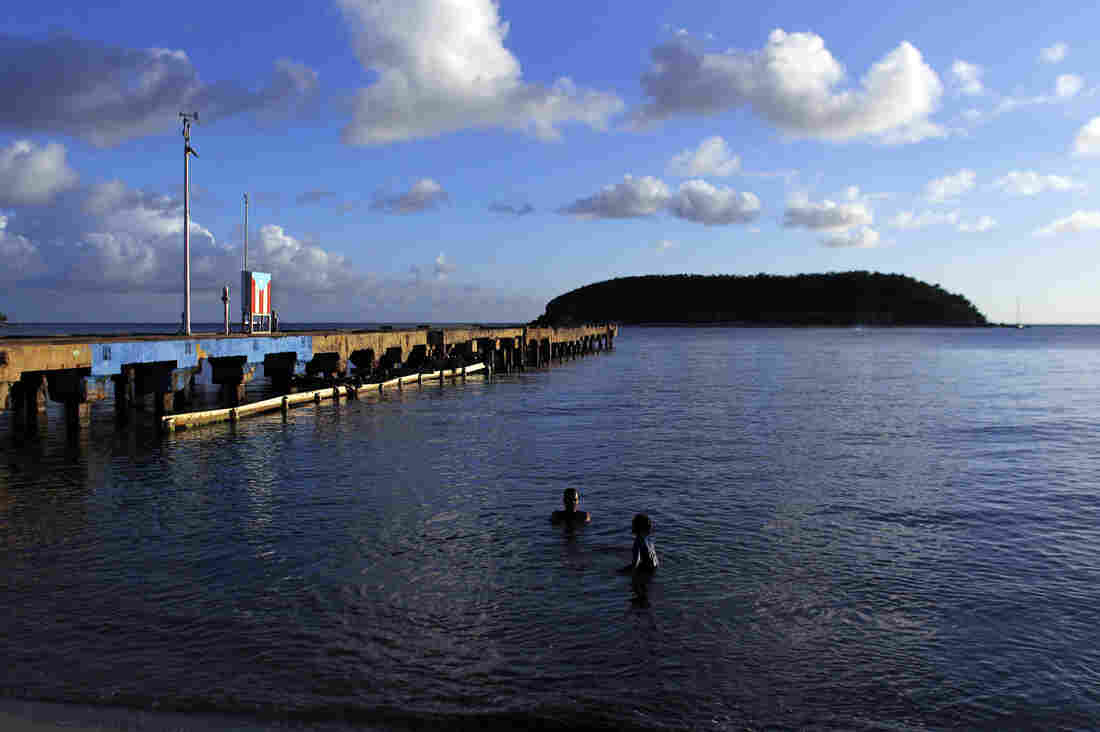 Two people swim at a beach in Vieques, Puerto Rico. One of the bays on the island is famous for its bioluminescent plankton, which are slowly recovering after Hurricane Maria. Ricardo Arduengo for NPR hide caption 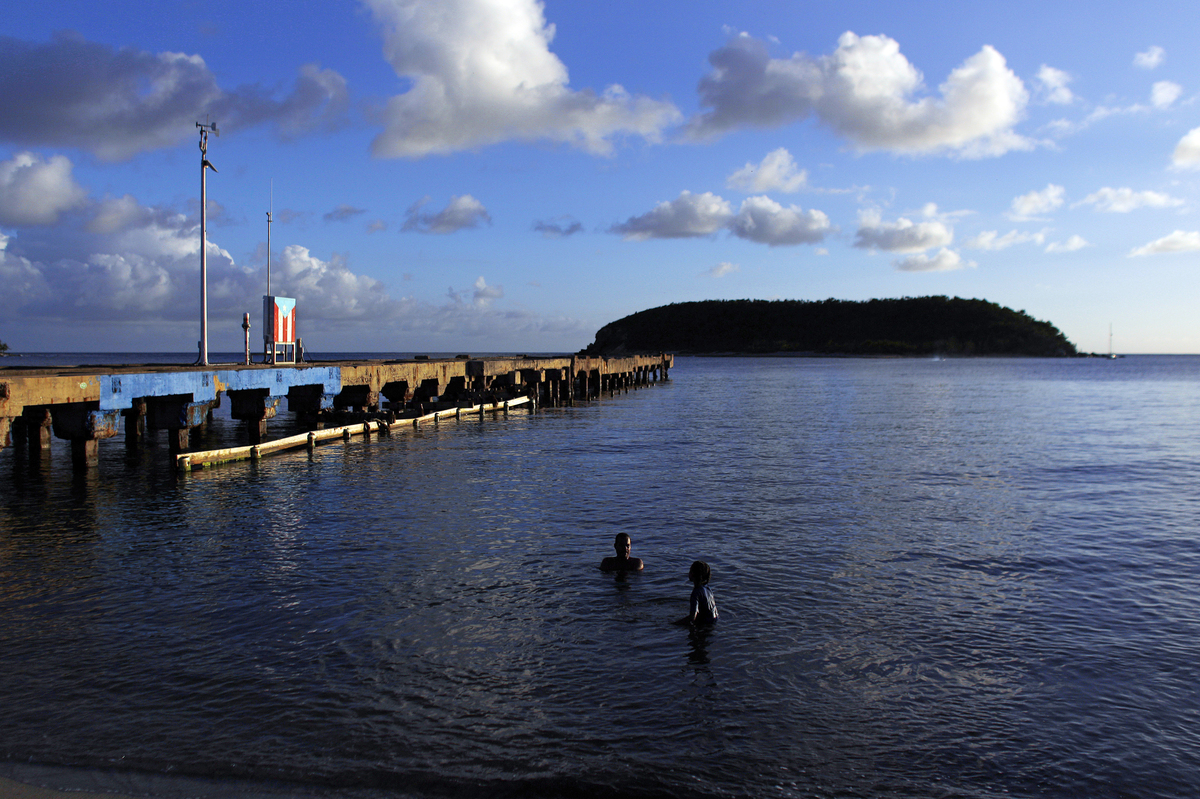 Two people swim at a beach in Vieques, Puerto Rico. One of the bays on the island is famous for its bioluminescent plankton, which are slowly recovering after Hurricane Maria.

On a normal night, dozens of tourists would be gaping at the glowing sea life on Mosquito Bay, a cove named after a legendary pirate ship in Vieques, Puerto Rico. But on a night in mid-December, it's empty. The loudest sounds are the frogs croaking in the mangroves.

Hurricane Maria wreaked havoc on the small island 8 miles off the coast of Puerto Rico, destroying power systems, ripping apart homes and damaging its bioluminescent bay, one of the brightest in the world and a lifeline for its vital tourism industry. For weeks after the storm, the water was dark.

But, slowly, it's starting to glow again, as the delicate chemistry of the bay recovers from the hurricane's disruptive winds and dousing of fresh water. Nearly three months after the storm, we paddle out on kayaks with Angie Hernandez, a guide for the Vieques-based ecotourism company Black Beard Sports. The stars are brilliant overhead.

We're here tonight to look down into the water for luminous sea life called dinoflagellates. These single-celled plankton light up when they are disturbed. When plankton are numerous and conditions are optimal, running your hand through the water leaves a trail of flickering light.

The species here glows blue-green. It's called Pyrodinium bahamense, or "the whirling fire of the Bahamas." Hernandez and another guide say that when the bay is glowing at full force, you can actually tell what kind of fish are moving underwater based on the shape of the glow. Fish jumping above the surface leave a trail of luminous splashes. When it rains, they say the whole surface of the water is alight.

Edith Widder, a bioluminescence specialist and the co-founder of the Ocean Research and Conservation Association, says glowing is a defense mechanism for these creatures, which share characteristics with both plants and animals. The flashes may alert larger predators to the presence of whatever is disrupting the plankton.

"So, it's remarkably complicated behavior for a single-celled creature, and boy can it be spectacular," she says.

But hurricanes ruin the light show. Rain disrupts the bay's chemistry with lots of fresh water. Hurricane Maria damaged the mangroves surrounding the bay, which provide an essential vitamin to the dinoflagellates, Widder says.

And high winds can actually push the glowing creatures out into the open ocean. "Winds could have pushed the water out of the bay, out of the mouth of the bay," Hernandez adds. After other hurricanes, it reportedly took months before the bay started glowing again, she says.

We stop at an area of the bay close to the mouth and dip our hands in the water, leaving a trail of light. "I'm pushing the paddle forward and you're able to see a ball, like a formation of light," Hernandez demonstrates.

It's striking, and yet it's only a fraction of the usual brightness, she says — perhaps a two on a 10-point scale. Here's a video created by a recent visitor to Vieques that gives a sense of the glow:

Widder says there are only a handful of bioluminescent bays worldwide – and there used to be many more. "And they're not nearly as bright, any of them, as they used to be. Which is distressing."

Pollution is actually having a bigger impact than hurricanes, she says. "We're releasing so much stuff into our water with no real clear understanding of what its impacts may be on these very complex ecosystems."

Mark Martin-Bras, the director of research for the Vieques Conservation and Historical Trust, takes weekly water samples to monitor the bay. He says they've seen fluctuations in luminescence since the storm and it's not clear how long it will take for the bay to recover. But, he adds, "the marine world has a way of surviving and cleaning itself, to a point, from these natural disasters."

This difficult situation provides an opportunity, he says, to learn more about how this ecosystem deals with powerful hurricanes. And it serves as a reminder: "The attraction of this island, and the power of it, comes from the natural things, and you want to protect them rather than exploit them." It's the crown jewel of the island's natural wonders, he says. "It's magic."

On the bay, Hernandez says the flickers of light from the water are a relief. Life after Maria has been extremely difficult. She went weeks without regular running water. And she's only had a handful of tours come through. But tonight she can see the bay is coming back.

"Seeing this now, after seeing it diminish, this gives me a lot of hope," she says.