Accessibility links
Got The Scoop On The Gardner Museum Art Heist? You Have 4 Days To Earn $10 Million : The Two-Way In 1990, two men stole 13 pieces of art from a Boston museum. They're worth half a billion dollars ... if you could sell them. On the other hand, the museum has a hefty reward for their whereabouts.

Got The Scoop On The Gardner Museum Art Heist? You Have 4 Days To Earn $10 Million

Got The Scoop On The Gardner Museum Art Heist? You Have 4 Days To Earn $10 Million 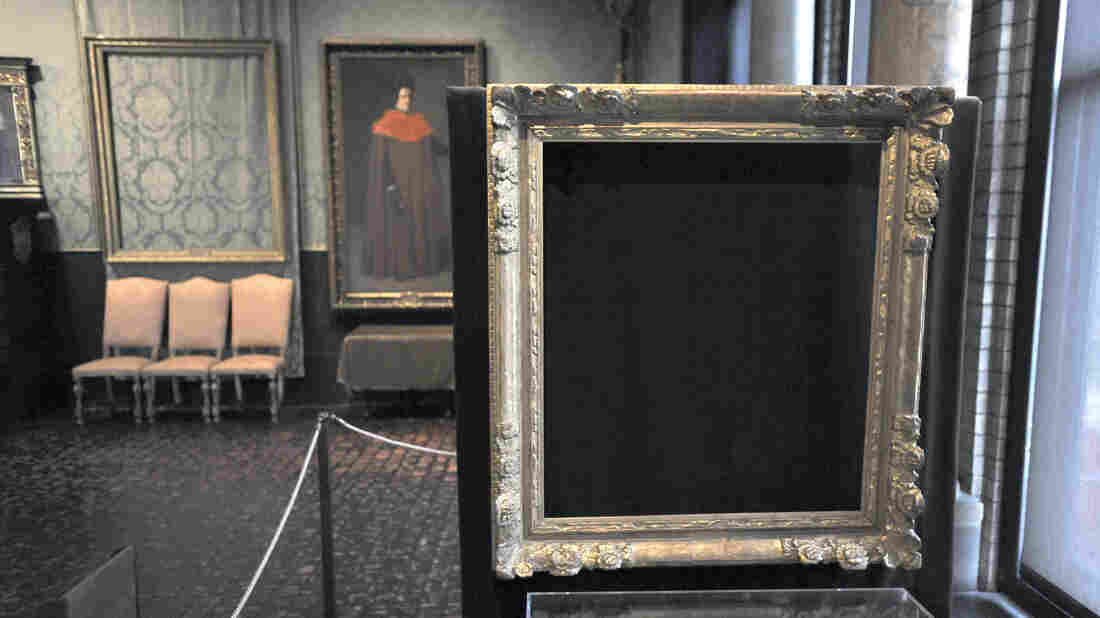 Empty frames from which thieves took Storm on the Sea of Galilee by Rembrandt and The Concert by Vermeer remain on display at the Isabella Stewart Gardner Museum in Boston in 2010. Midnight on Dec. 31, 2017, is the deadline to collect a $10 million reward being offered for information leading to the recovery of 13 stolen works worth an estimated $500 million. Josh Reynolds/AP hide caption 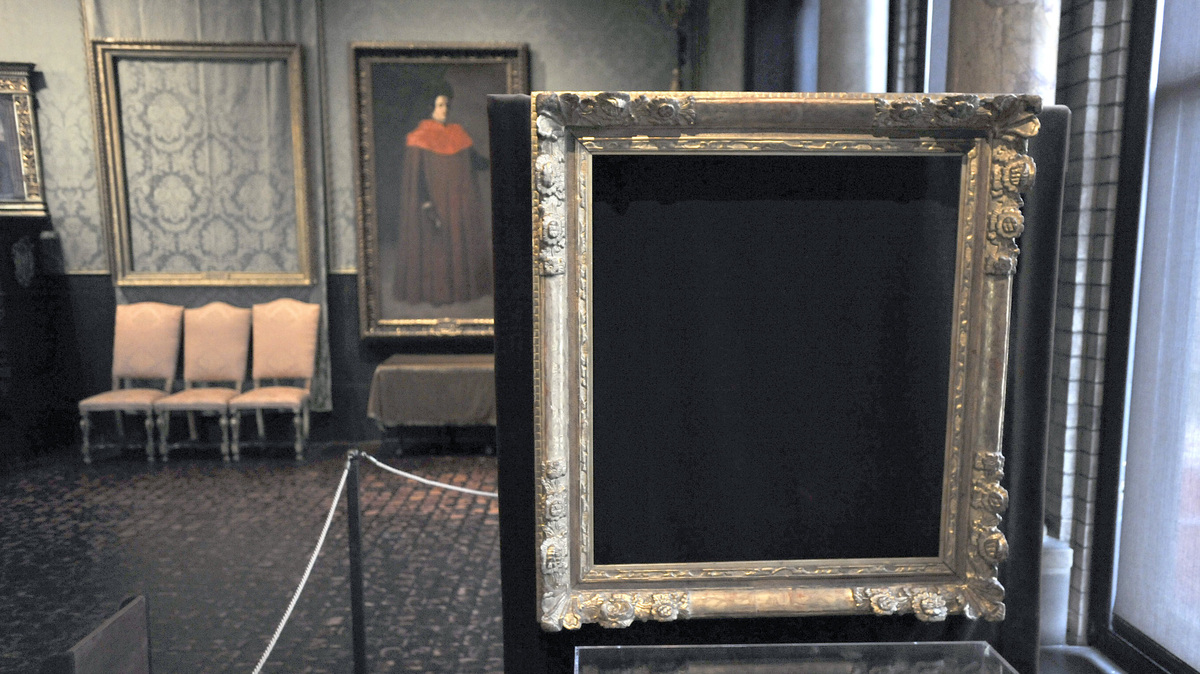 Empty frames from which thieves took Storm on the Sea of Galilee by Rembrandt and The Concert by Vermeer remain on display at the Isabella Stewart Gardner Museum in Boston in 2010. Midnight on Dec. 31, 2017, is the deadline to collect a $10 million reward being offered for information leading to the recovery of 13 stolen works worth an estimated $500 million.

If you've got a burning secret about the 13 pieces of art missing from Boston's Isabella Stewart Gardner Museum, the clock is ticking.

Share the details in the next four days, and you'll earn a cool $10 million.

Wait until 2018, and that reward will be slashed in half.

The March 18, 1990, theft of the masterpieces was the biggest-ever heist from an art museum and the largest property crime America has ever seen. Three Rembrandts, including his only known seascape. A Vermeer. A Manet. Sketches by Degas. All spirited away by bold thieves disguised as policemen.

The artworks are, collectively, worth more than $500 million, but they're so recognizable that they're believed to be nearly impossible to sell. No one knows where they are; at least, no one has told the museum or the FBI.

Twenty-seven years later, the museum has empty frames on its walls — reminders of the art that isn't there.

A $1 million reward was later boosted to $5 million. And this year, the prize money was doubled, with a deadline of Dec. 31.

Hot Tip On Old Heist Could Be Worth $10 Million, Gardner Museum Says

"Clearly there's a sense of urgency on our part," she said. "We want our paintings back."

To be clear, the museum isn't looking for the names of the thieves. The FBI actually has a pretty good idea who did it — they suspect two men tied to the mob — but the statute of limitations on the crime expired years ago. 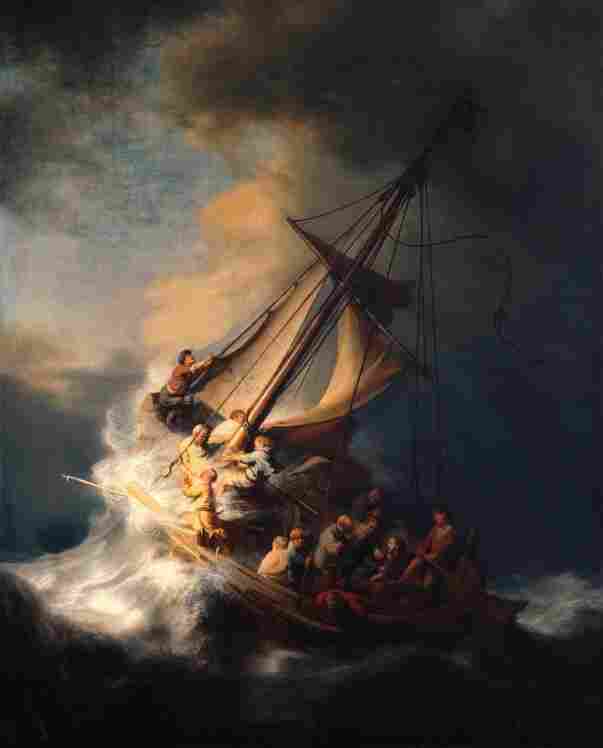 Christ in the Storm on the Sea of Galilee, a 1633 painting by Rembrandt, was stolen from the Isabella Stewart Gardner Museum in 1990. Gardner Museum hide caption 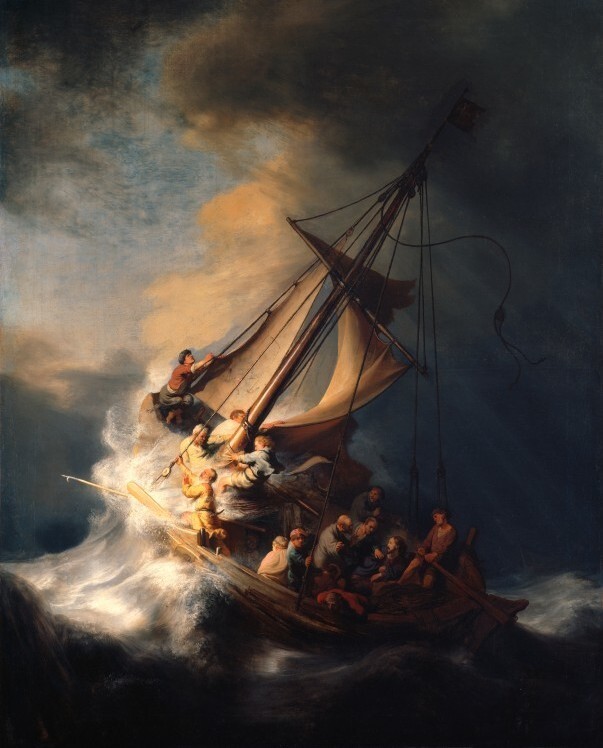 Christ in the Storm on the Sea of Galilee, a 1633 painting by Rembrandt, was stolen from the Isabella Stewart Gardner Museum in 1990.

It's not about catching the crooks or making sure justice is served. The museum just wants its masterpieces back.

"I am focused like a laser beam on one thing and that is recovering our stolen art and putting it back on the walls here at the museum, where it belongs," Anthony Amore, head of security at the museum and the chief investigator into the heist, tells NPR.

Amore tells NPR he's been busy lately, chasing leads and responding to calls and emails from the public.

"We have received a few good calls with important information, and we hope to receive more before the end of the year," he says.

But not all tips are created equal. "The majority of the calls are theories," he says. "And what we're looking for are facts that will lead us to a recovery, rather than theories that people have come up with from their homes."

If you have those kinds of facts at hand, email theft@gardnermuseum.org to pass along your tip — confidentiality guaranteed — and claim your $10 million.

Curious about how that grand heist went down? Boston Globe reporter Stephen Kurkjian, author of a book about the theft, explained the night's fateful events to NPR in 2015.

"Two men dressed in police uniforms rang the bell to the employees' entrance of the Isabella Stewart Gardner Museum. They showed up on the monitor screen of one of the two night watchmen who were on duty that night. ... They said, 'We're here to investigate a disturbance,' so [security guard Rick Abath] buzzed them in.

"He stepped away from the security desk that he was sitting at, and that removed him from the only alert. The only outside alarm that the museum had was a button that was at his security desk. And he stepped away from it because the alleged police officers, the thieves, said to him that he 'looked familiar,' that 'didn't they have a warrant out for his arrest?'

"He was worried that if he was arrested on a weekend night — and this was Sunday morning — he would not be in court until Monday, and he knew he had tickets to that night's Grateful Dead concert in Hartford, Conn. And he didn't want to miss it by being in jail, so he stepped away and he got tied up, he got apprehended. His fellow night watchman came down and they tied him up and then, you know, these two thugs were allowed to pull off the greatest art theft — half a billion dollars ... probably more.

"No one can put a value on these paintings because no one's going to buy stolen artwork of this value. And that's why the sense is that the works do not lay in the hands of an art collector who cannot live without this Rembrandt or that Vermeer but they were stolen for some other reason."

That security guard who let the thieves in, Rick Abath, shared his memories of that night on StoryCorps in 2015. He remembered being handcuffed to the electrical box in the museum for eight hours, duct tape over his eyes, singing Bob Dylan's "I Shall Be Released" over and over again.

"I was just this hippie guy who wasn't hurting anything, wasn't on anybody's radar," he said. "And the next day, I was on everybody's radar for the largest art heist in history."

"Two of the Rembrandts, they cut them out of the frames. So even if they get the paintings back, they'll never be the same," he said. "And I feel horrible about that ... ultimately, I'm the one who made that decision to buzz them in."