Accessibility links
Accidentally Killing Birds Isn't A Crime, Says Trump Administration : The Two-Way A legal memo from the Department of the Interior declares that the Migratory Bird Treaty Act applies only to purposeful actions that kill migratory birds. 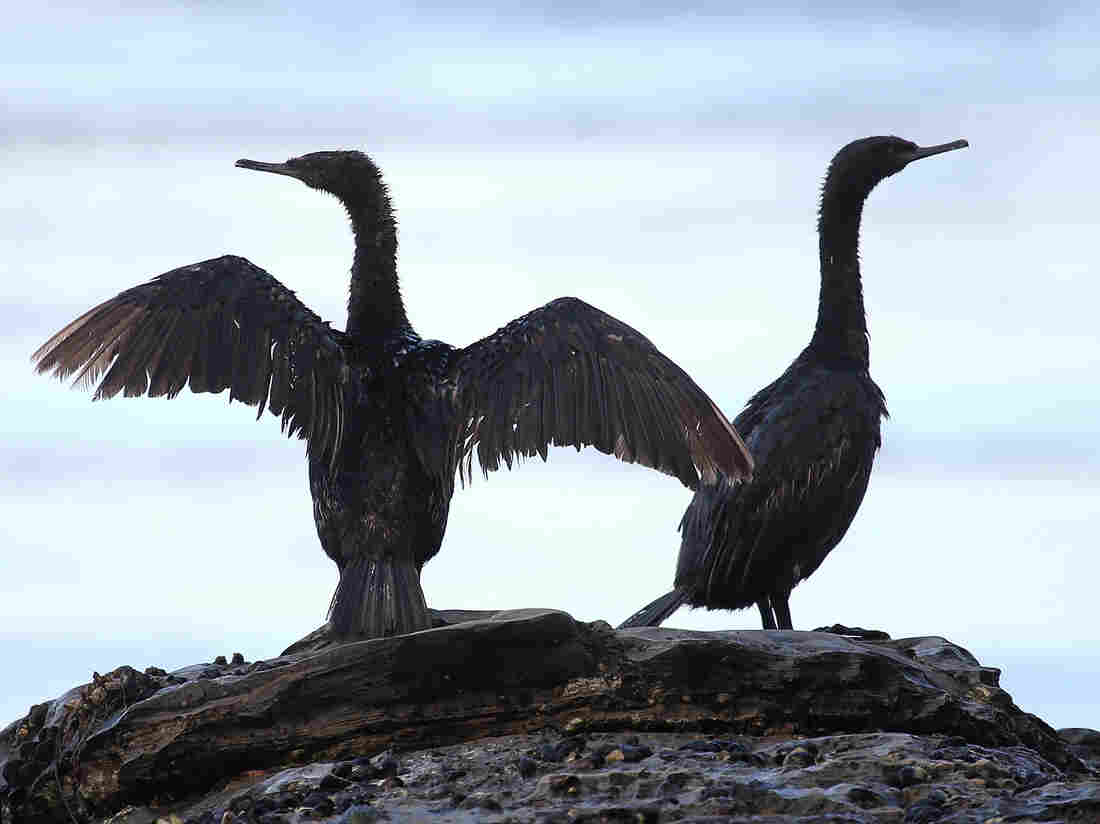 Two birds covered in oil sit on a rock near Refugio State Beach in Goleta, Calif., in 2015 after an oil spill from an abandoned pipeline spread over the beach. The Department of the Interior says it will no longer criminally prosecute energy companies that kill birds accidentally. Justin Sullivan/Getty Images hide caption 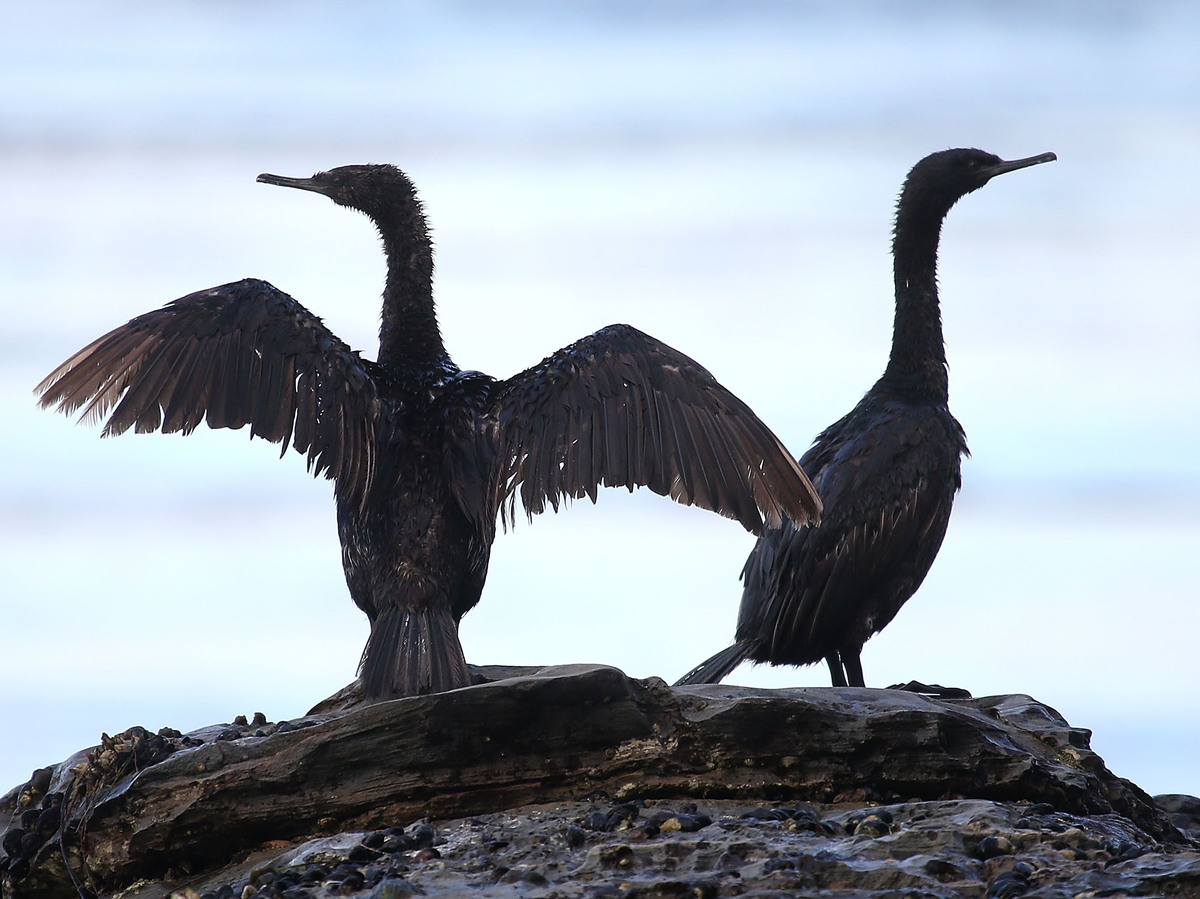 Two birds covered in oil sit on a rock near Refugio State Beach in Goleta, Calif., in 2015 after an oil spill from an abandoned pipeline spread over the beach. The Department of the Interior says it will no longer criminally prosecute energy companies that kill birds accidentally.

The Trump administration says it will no longer criminally prosecute companies that accidentally kill migratory birds. The decision reverses a rule made in the last weeks of the Obama administration.

A legal memo from the Department of the Interior posted Friday declares that the Migratory Bird Treaty Act applies only to purposeful actions that kill migratory birds, and not to energy companies and other businesses that kill birds incidentally.

"Interpreting the MBTA to apply to incidental or accidental actions hangs the sword of Damocles over a host of otherwise lawful and productive actions, threatening up to six months in jail and a $15,000 penalty for each and every bird injured or killed," the memo says.

The U.S. Fish and Wildlife Service estimates more than 30 million birds die each year in collisions with power lines and communications towers, and hundreds of thousands more in oil pits and wind turbines.

In its final weeks, the Obama administration issued a legal opinion stating that the law does include the incidental killing of birds, but in February, the Trump administration suspended that opinion pending review.

The National Audubon Society said the Trump administration's interpretation guts the treaty and runs counter to decades of legal precedent and conservation principles. "The Migratory Bird Treaty Act is one of the most important conservation laws we have," the group says.

The law protects more than 1,000 bird species, according to the society, because it requires industries to take certain steps to protect them, like covering tar pits and marking transmission lines.

"We just don't want to lose any incentive for the industry to come to the table and work through this with us," David O'Neill, the society's chief conservation officer, told The Washington Post. "And the solutions are out there."

How To Make Broadcast Towers More Bird-Friendly: Turn Off Some Lights

At least one industry group praised the administration's decision.

"Over the last few years, the management of 'take' under MBTA has been riddled with flawed decisions that have created massive uncertainty," Tim Charters, senior director of government affairs for the National Ocean Industries Association, told the Post. "This common-sense approach ensures that lawful activities are not held hostage to unnecessary threats of criminalization."

BP pleaded guilty to violating the act with its actions related to the 2010 Deepwater Horizon oil spill. As part of its settlement, the oil company agreed to pay $100 million to the North American Wetlands Conservation Fund, money that was used for wetlands restoration and conservation well beyond the Gulf region where the spill occurred.

Renewable energy projects have also been found in violation. In 2013, Duke Energy pleaded guilty to violating the act in connection with the deaths of two golden eagles at its wind projects in Wyoming, in what the Justice Department said was the "first ever criminal enforcement of the Migratory Bird Treaty Act for unpermitted avian takings at wind projects."

The utility company was sentenced to pay fines, restitution and community service totaling $1 million. It was also placed on probation for five years. It is required to implement an environmental compliance plan aimed at preventing bird deaths at the company's four commercial wind projects in the state.

Collin O'Mara, president of the National Wildlife Federation, told the Post that neither administration had gotten it right: The interpretation was too broad before, and now it is too narrow.

"We're seeing the whipsaw from one extreme to the other," he told the newspaper, saying that in terms of Interior's energy policies, "one year in, there's been no balance. If the choice is between energy and conservation, energy always wins."