Accessibility links
Death Toll Climbs As Anti-Government Protests Continue In Iran : The Two-Way Protesters are calling for the end of clerical rule and the removal of Iran's supreme leader, Ayatollah Ali Khamenei. The demonstrations are the biggest since 2009. 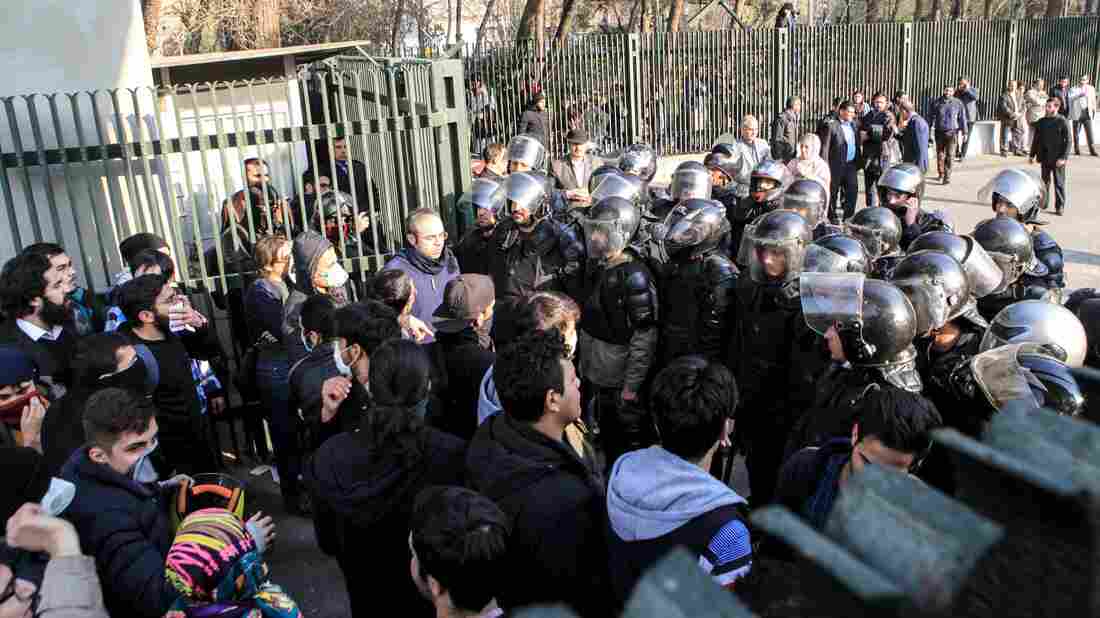 Iranian students scuffle with police at the University of Tehran on Saturday during a demonstration driven by anger over economic problems. Stringer/AFP/Getty Images hide caption 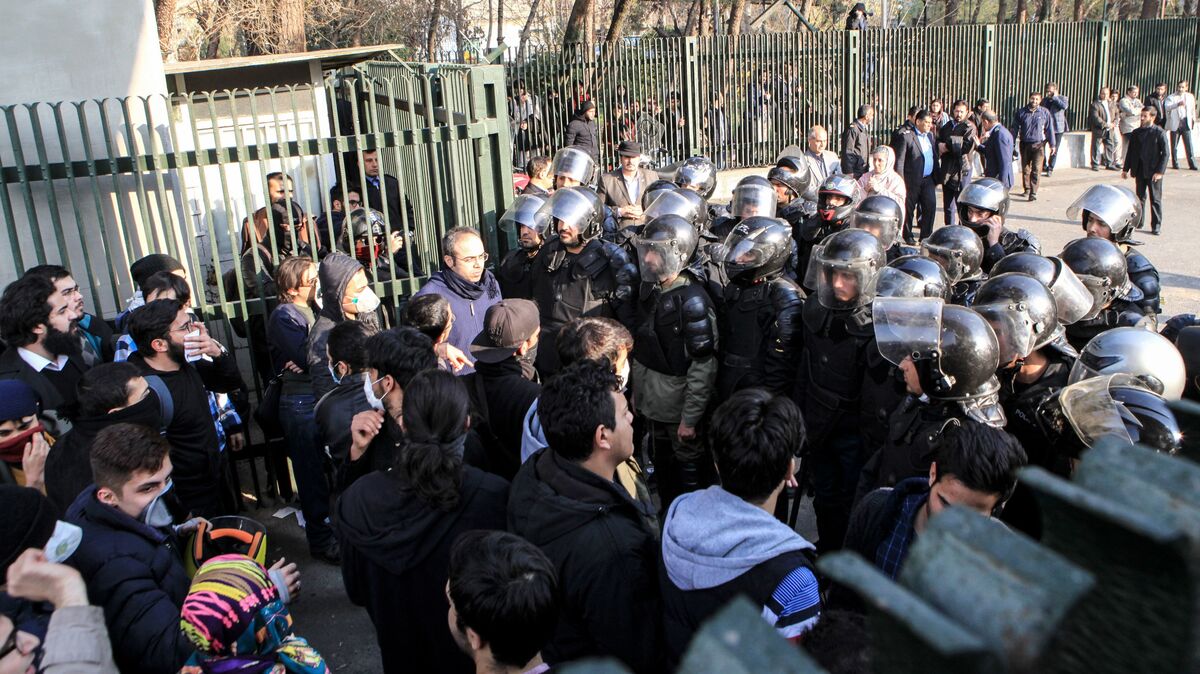 Iranian students scuffle with police at the University of Tehran on Saturday during a demonstration driven by anger over economic problems.

Thousands of Iranians have taken to the streets in recent days, with many protesters calling for the removal of Iran's supreme leader, Ayatollah Ali Khamenei.

The government warned on Sunday that protesters would suffer severe consequences if demonstrations continued and 10 protesters were reported killed, according to the Associated Press and Reuters.

"Those who damage public property, violate law and order and create unrest are responsible for their actions and should pay the price," Interior Minister Abdolreza Rahmani Fazli told Iranian state media, according to Reuters.

In one Associated Press report, "The public discontent has been fanned by messages sent on the Telegram messaging app, which Iranian authorities blocked Sunday along with the photo-sharing app Instagram, which is owned by tech giant Facebook."

Two protesters were shot in the town of Dorud in Iran's Lorestan province Saturday night, the government confirmed.

The deputy governor of Lorestan, Habibollah Khojastehpour, said foreign agents were responsible. "No shots were fired by the police and security forces. We have found evidence of enemies of the revolution, [Sunni militant] groups and foreign agents in this clash," according to a Reuters translation of comments on the semi-official Mehr News.

Some demonstrations have turned violent. "Protesters have attacked banks and government buildings and burned a police motorcycle," the wire service says.

Authorities said Saturday at least 50 protesters had been arrested, The Associated Press reports. On Sunday, the semi-official news organization ILNA said authorities arrested about 80 protesters in Arak, a city southwest of Tehran.

A common element of all protests has been a call for the end of clerical rule in Iran, according to the BBC's Kasra Naji. The country's clerics have maintained power since the country's Islamic Revolution of 1979.

Other motivations behind protests are frustration over economic struggles and alleged corruption, reports say.

President Hassan Rouhani, who has been seen as a gradual reformer, won re-election in May. He championed the 2015 nuclear deal with Western powers that saw sanctions lifted in return for certain limits on Iran's nuclear development.

But economic benefits of sanctions relief have not yet materialized for average Iranians. Unemployment in the spring of 2017 was 12.6 percent, up slightly from late 2016, according to the World Bank.

President Trump tweeted three times in support of protesters on Friday and Saturday:

Many reports of peaceful protests by Iranian citizens fed up with regime’s corruption & its squandering of the nation’s wealth to fund terrorism abroad. Iranian govt should respect their people’s rights, including right to express themselves. The world is watching! #IranProtests

"The entire world understands that the good people of Iran want change, and, other than the vast military power of the United States, that Iran's people are what their leaders fear the most," he added in another tweet. In a third, he wrote: "Oppressive regimes cannot endure forever, and the day will come when the Iranian people will face a choice. The world is watching!"

He continued Sunday morning, mentioning that Iranians are "finally getting wise as to how their money and wealth is being stolen and squandered on terrorism" and "they will not take it any longer."

Bahram Qassemi, spokesman for Iran's foreign ministry, said Trump's remarks and the statements of other U.S. officials were "opportunist and duplicitous" and said it was part of "the deceit and hypocrisy of the U.S. administration." Qassemi was quoted by the newspaper Tehran Times, which calls itself the "voice of the Islamic Revolution."

Iranians are blocked from entering the U.S. as part of the Trump administration's travel ban, a fact not lost on the Iranian government, with Qassemi calling it "spiteful."

The demonstrations are the biggest in Iran since the disputed 2009 re-election of Mahmoud Ahmadinejad.