Accessibility links
Extreme Cold Grips Much Of The U.S. : The Two-Way 2018 is off to a frigid start. From Texas to the mid-Atlantic to the Ohio Valley, temperatures are significantly lower than average, with sometimes fatal consequences. 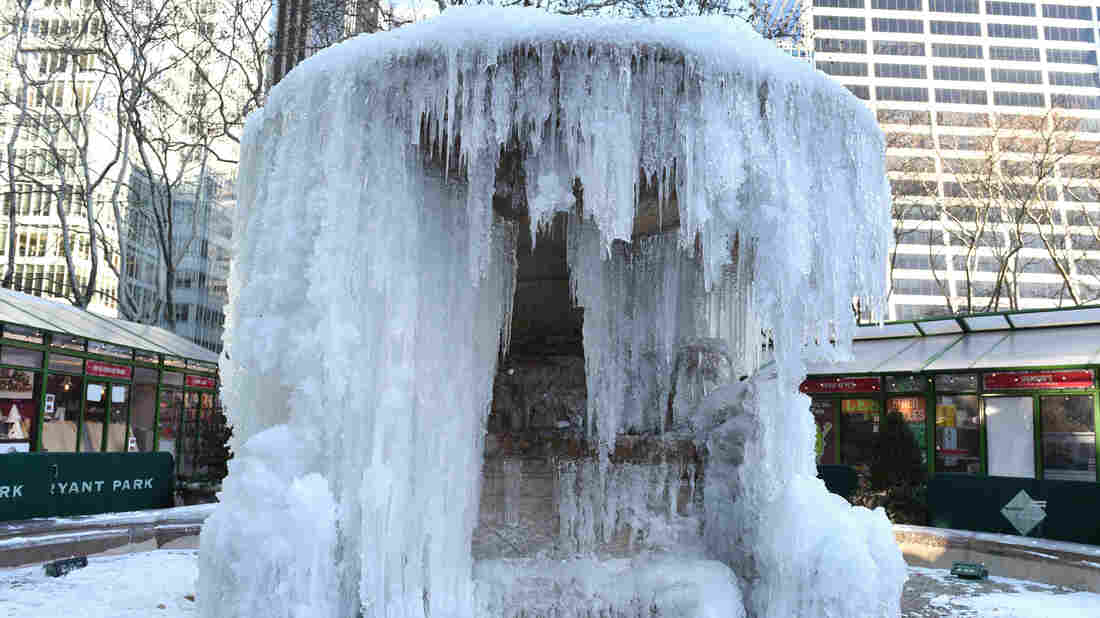 The Josephine Shaw Lowell Memorial Fountain at Bryant Park in New York City was frozen on Tuesday, as New Yorkers return to work after the holiday break. Timothy A. Clary/AFP/Getty Images hide caption 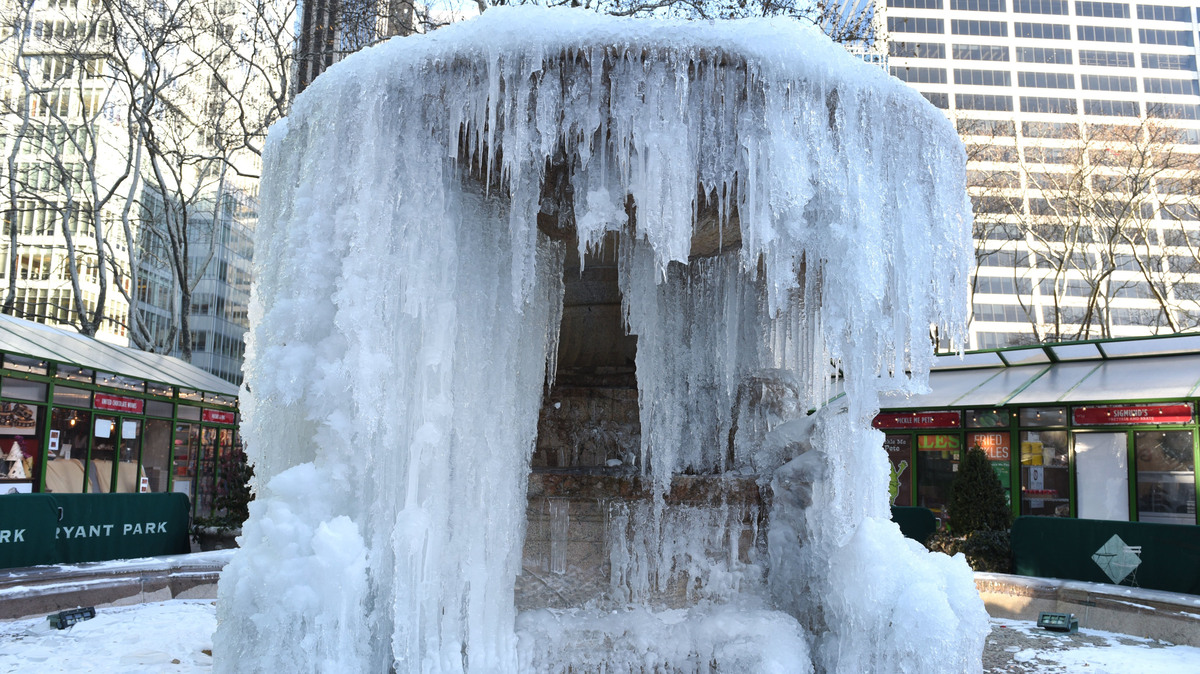 The Josephine Shaw Lowell Memorial Fountain at Bryant Park in New York City was frozen on Tuesday, as New Yorkers return to work after the holiday break.

From Texas to Ohio, temperatures are 15 to 25 degrees lower than average, the National Weather Service says. Brutally cold temperatures continue in the Northeast. There's a hard freeze warning across the Deep South — and a chance of snow in New Orleans.

It's 17 degrees in Atlanta. There's a low of 14 degrees in Tupelo, Miss. In Dallas, temperatures will stay below freezing all day.

In Sub-Zero Temperatures, Skiers Find 'Bliss' In The Frozen Woods

How Bitterly Cold Weather Is Affecting The Country

And in the parts of the country that are used to cold weather, temperatures are even chillier than usual.

Aberdeen, S.D., broke a 99-year record when the temperature dropped to minus 32 degrees Fahrenheit, the Associated Press reports. The wire service continues:

"It was colder in Des Moines, Iowa, where city officials closed a downtown outdoor ice skating plaza and said it wouldn't reopen until the city emerged from sub-zero temperatures. The temperature hit 20 below zero (-29 Celsius) early Monday, with the wind chill dipping to negative 31 degrees (-35 Celsius).

"The weather service said temperatures in Indianapolis early Tuesday tied a record low of minus 12 degrees Fahrenheit (minus 24 degrees Celsius) for Jan. 2 set in 1887. Indianapolis Public Schools canceled classes for Tuesday on all its campuses because of the predicted sub-zero temperatures. Students had been scheduled to return from winter break.

"In northeastern Montana, the wind chill readings dipped as low as minus 58 (-50 Celsius). And in Duluth, Minnesota, a city known for its bitter cold winters, the wind chill dipped to 36 below zero (-38 Celsius)."

The cold weather has been cited in at least eight deaths within the past week, the AP reports.

Two men were found in two locations in Milwaukee on Sunday, after apparently cold-related deaths; a homeless man's body was found on a porch in Charleston, W.Va., and a man was found dead outside a church in Detroit, Reuters reports.

Many Southern cities have opened emergency shelters and warming centers for the homeless. In some areas, police and volunteers have hit the streets to hand out blankets and other supplies.

Cold Much? Here Are Tips From NPR's Northern Stations

Meanwhile, polar bear plunges — where hardy souls take a dip in freezing cold waters, often to raise money for charity — have been canceled in multiple locations.

In Chicago, where the thermometer hit minus 9 degrees on New Year's Day, a plunge was called off in the name of safety.

A winter swim at Old Orchard Beach, Maine, to raise funds for the Special Olympics was postponed until it gets a little warmer — well, relatively.

"I'm not going to lie that I'm a little excited about 28 degrees as opposed to negative 16," Public Relations Director Lisa Bird, who will participate in the dip, told member station Maine Public. She was referencing the dire-sounding wind chill predictions for Monday.

In Cleveland, a swim in Lake Erie was canceled because, as WKYC reports, "crews had a difficult time cutting a hole into the ice."

Minnesotans and Wisconsinites are made of different stuff, however.

Should You Warm Up Your Car Before Driving To Work?

In Milwaukee, a polar bear plunge went on Monday, with the temperature at around 2 degrees. Participant Dennis Wurch, with 40 years of experience in the plunge, was drinking vodka and Jagermeister as he shared his tips for first-time plungers with the Milwaukee Journal Sentinel.

"Don't come down here if you have any good sense left at all," he said.

Also on Monday, an "Ice Dive" continued as scheduled at Lake Minnetonka — with the mercury at negative 15 degrees. The water was relatively balmy at just above freezing.

"It's always the same," longtime participant Scott Searl told KSTP. "It always hurts and it's stupid."

But, hey, it's not cold everywhere. The Pacific Northwest is experiencing normal winter weather, with rain in the forecast for later this week.

There's a high of 70 degrees Tuesday in both Key West, Fla., and Los Angeles, the National Weather Service says — and Tucson, Ariz., should hit 75.