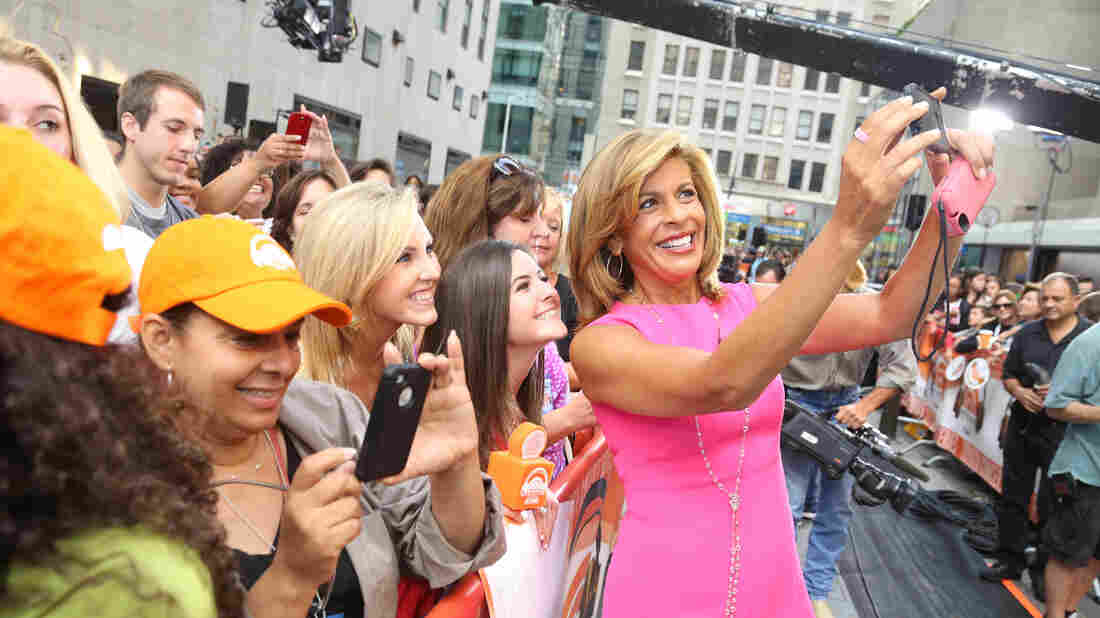 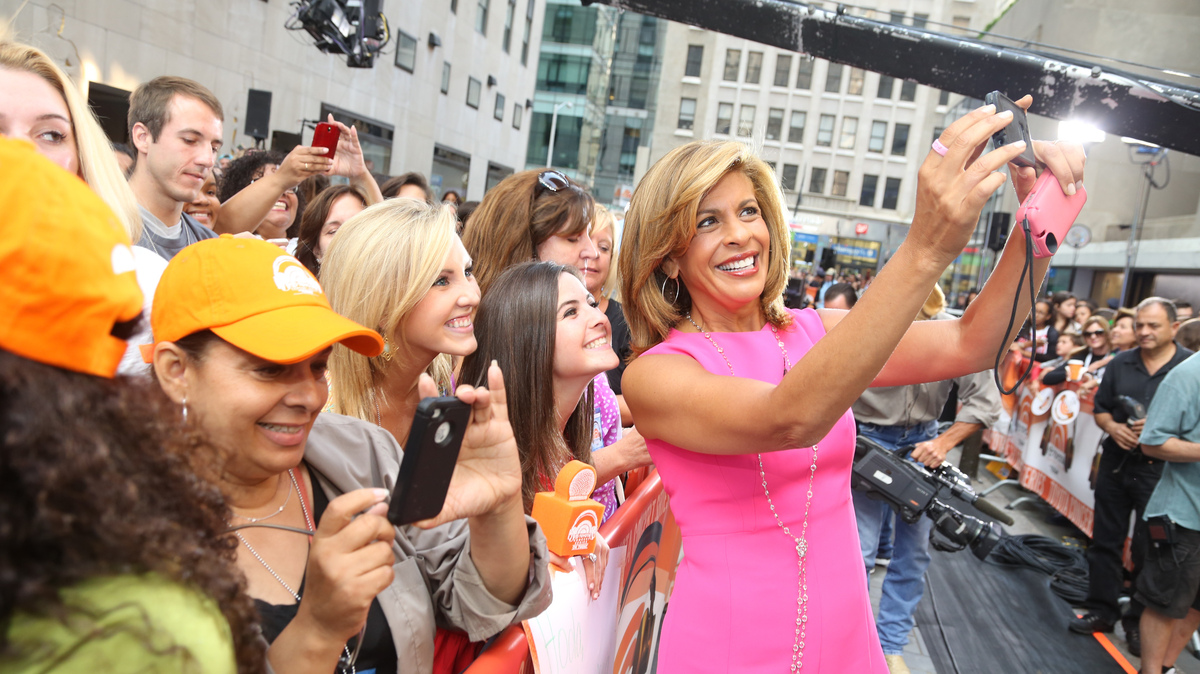 Hoda Kotb poses with guests outside of the Today show studios in 2014. Kotb has just been named co-anchor of the show, replacing longtime co-anchor Matt Lauer.

Hoda Kotb, who has been filling in for Matt Lauer since he was fired in late November for sexual misconduct, has been officially named co-anchor of NBC's Today show.

In addition to co-anchoring the first two hours of Today, Kotb will also continue to co-host the fourth hour of the show with Kathie Lee Gifford. (The third hour is currently hosted by Megyn Kelly.)

The morning news show announced Kotb's new role on Tuesday morning. "Let's give her a round of applause," Guthrie said, grinning. "This has to be the most popular decision NBC News has ever made."

"I'm pinching myself," Kotb said. "I think that we should send some medics to Alexandria, Va., where my mom has likely fainted."

"You are a partner and a friend and a sister and I am so happy to be doing this," Guthrie said to her colleague.

"There's no one I'd rather be sitting next to in 2018 than you," Kotb said, reaching out and briefly clasping hands with Guthrie.

Kotb is replacing Lauer, who was the co-anchor of Today for 20 years and was the highest paid person at NBC News at the time of his firing, NPR's David Folkenflik has reported.

Lauer was fired at the end of November, after reports of sexual misconduct and workplace harassment surfaced. He's one of many prominent men — including two top editors at NPR — to lose their jobs in a long string of harassment-related allegations and disclosures, many related to patterns of conduct that dated back decades.

NBC fired Lauer in response to an allegation brought by a younger female colleague who said Lauer sexually harassed her at the 2014 Sochi Olympics, and continued afterward.

As NPR reported at the time, there were other allegations against Lauer as well, which were detailed in reporting by Variety and The New York Times:

"Variety reports that multiple women at NBC say they were sexually harassed by Lauer. The story is based on a two-month investigation during which the magazine conducted 'dozens of interviews with current and former staffers, including three women whose accounts were corroborated by friends and colleagues who were told of the harassment at the time. The three women asked to remain anonymous for fear of professional repercussions.

"Lauer allegedly gave a female colleague a sex toy with an explicit note about how he wanted to use it on her. According to Variety, he exposed himself to another female employee and then "reprimanded her for not engaging in a sexual act," and he made lewd comments verbally or in text messages in front of other employees, including references to their performance in bed.

"The report quotes 'a former producer who knew first-hand of these encounters' as saying that Lauer's fame and status as a married man prevented him from seeking sexual relations elsewhere. 'So he'd have to do it within his stable, where he exerted power, and he knew people wouldn't ever complain,' said the producer."

Lauer has expressed "sorrow and regret" for the pain he caused, promising "soul searching" and a "hard look at [his] own troubling flaws."

Hoda Kotb, the new co-anchor of Today, has been a substitute or fill-in co-anchor for about a decade.

She's also a correspondent for Dateline NBC, the author of three books, and the host of "The Hoda Show" on Sirius XM.

Today famously documented Kotb's experience with breast cancer, and in the decade since her mastectomy, she has been an outspoken advocate for breast cancer prevention.

Kotb won a Peabody award for her work with Dateline, and a Daytime Emmy award as part of the Today show. NBC notes that she has also received a Gracie award and an Edward R. Murrow award during her time with the network.

Multiple outlets have noted that after Lauer's departure, with Kotb taking his place at the anchor desk, Today's ratings didn't show any sign of a drop — instead, they surged higher.