Accessibility links
U.S. Suspends Most Security Assistance To Pakistan : The Two-Way After Monday's tweet by President Trump accusing Pakistan of "deceit" and of harboring terrorists, the U.S. announced it will suspend most security aid to Islamabad. But the cut won't be permanent. 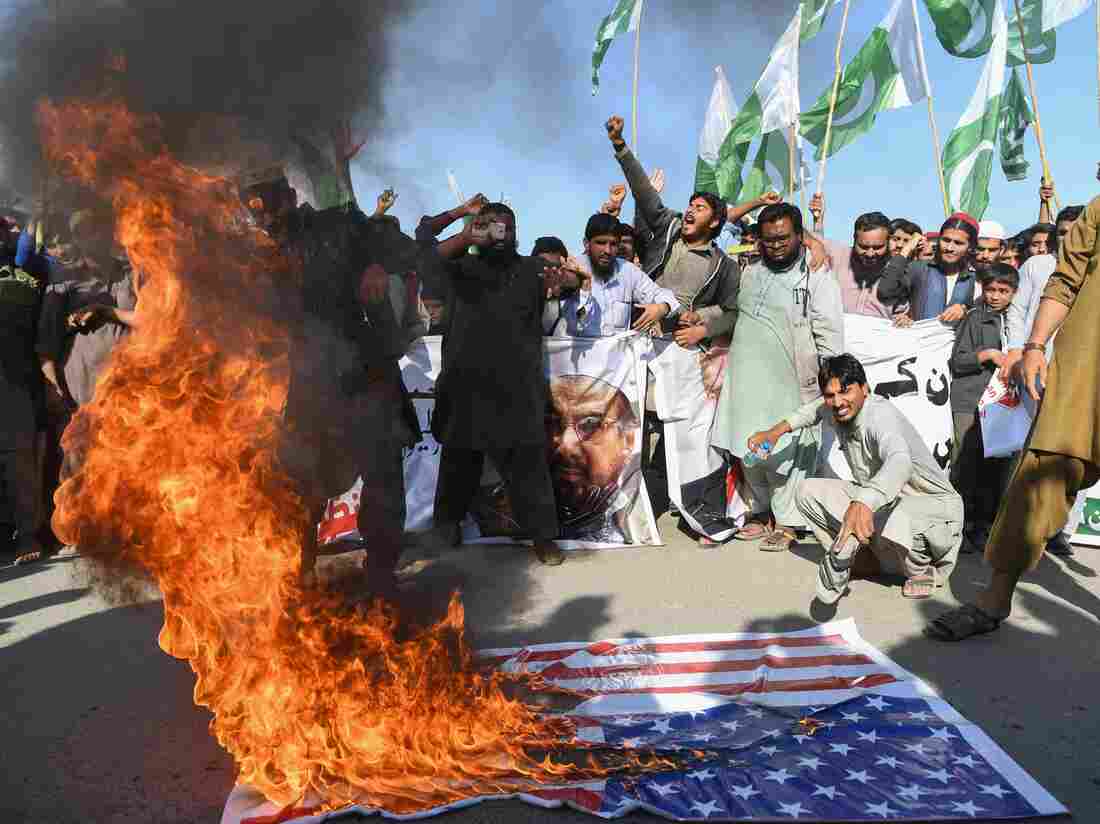 Demonstrators shout anti-U.S. slogans at a protest in Karachi, Pakistan, on Tuesday, a day after President Trump tweeted that Pakistan has "given us nothing but lies & deceit, thinking of our leaders as fools." Asif Hassan/AFP/Getty Images hide caption 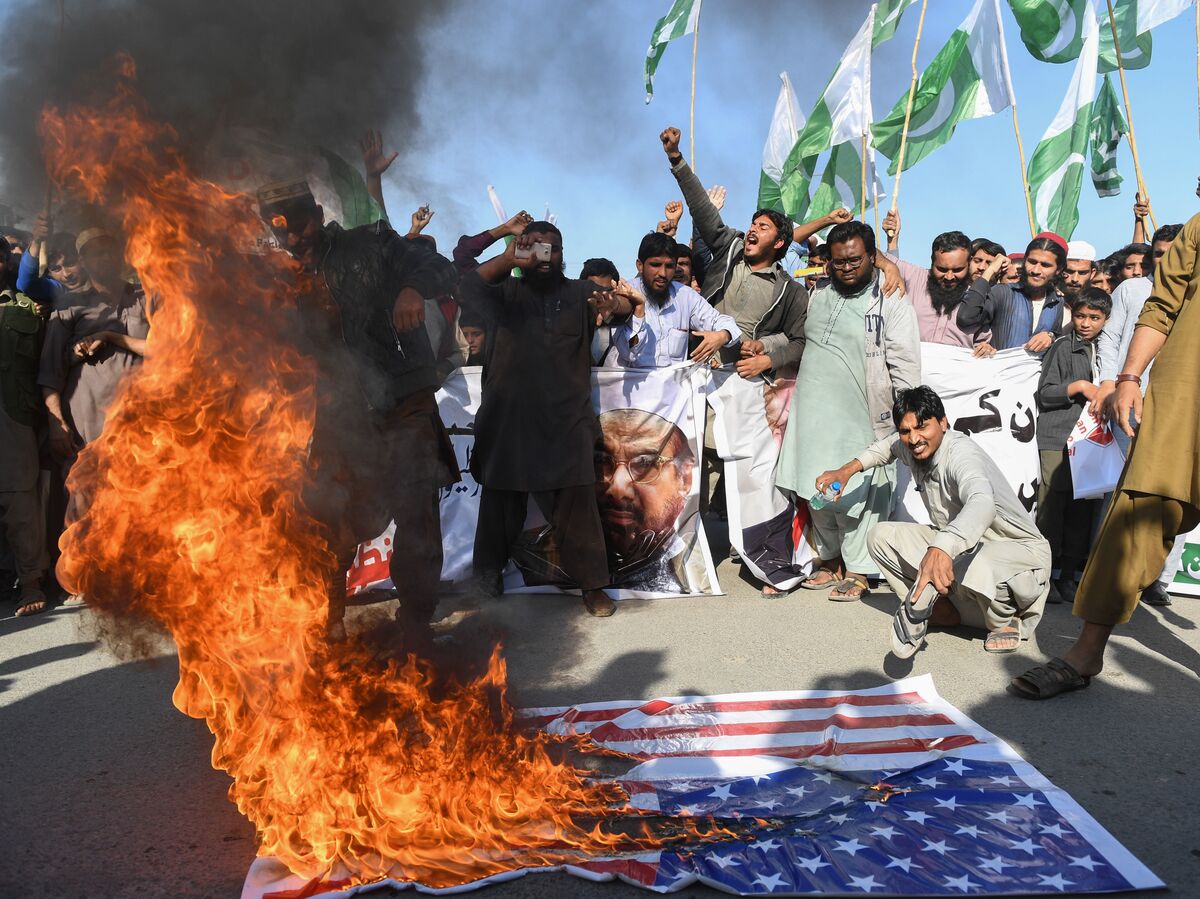 Demonstrators shout anti-U.S. slogans at a protest in Karachi, Pakistan, on Tuesday, a day after President Trump tweeted that Pakistan has "given us nothing but lies & deceit, thinking of our leaders as fools."

After a harshly worded New Year's Day tweet by President Trump accusing Pakistan of "deceit" and of harboring terrorists, State Department spokeswoman Heather Nauert confirmed Thursday that the U.S. will suspend most security assistance to Islamabad.

The cutoff is not permanent, Nauert said, and only affects military assistance. Civilian assistance is not affected.

Nauert told reporters that the suspension will remain in effect until Pakistan "takes decisive action" against groups, such as the Taliban, that are "destabilizing the region and targeting U.S. personnel." Although Pakistan "certainly has been helpful in some instances," she said, "they are not taking steps they need to take to fight terrorists."

The aid suspension will include equipment and the transfer of security-related funds, with possible exceptions for U.S. national security reasons.

Nauert was not immediately able to provide a total dollar amount for the cutoff. "We are still working through the numbers," she said.

In his first tweet of 2018, Trump said the U.S. "has foolishly given Pakistan more than 33 billion dollars in aid over the last 15 years, and they have given us nothing but lies & deceit, thinking of our leaders as fools. They give safe haven to the terrorists we hunt in Afghanistan, with little help. No more!"

Ahead of Nauert's remarks, military spokesman Maj. Gen. Asif Ghafoor told a Pakistani news channel on Wednesday that Pakistan would continue to cooperate with the U.S. but would not "compromise on national interests and prestige."

There have been hints of a Pakistan aid cut by the Trump administration for months.

Back in August, when announcing his new policy on Afghanistan and South Asia, the president said: "We have been paying Pakistan billions and billions of dollars at the same time they are housing the very terrorists that we are fighting. But that will have to change, and that will change immediately." He vowed to "no longer be silent about Pakistan's safe havens for terrorist organizations, the Taliban, and other groups that pose a threat to the region and beyond."

Later that month, the administration notified Pakistan that it was delaying a payment of $255 million in military aid, pending progress against Haqqani network militants who the U.S. says are based in Pakistan and aid the Taliban.

The military aid, known as foreign military financing, "promotes the development of Pakistan's long-term [counter-insurgency/counter-terrorism] capabilities and improves Pakistan's ability to participate in maritime security operations and counter-maritime piracy," according to the State Department.

The U.S. Ambassador to the United Nations Nikki Haley told reporters Tuesday that the U.S. would withhold the $255 million payment, saying, "Pakistan has played a double game for years." That $255 million is included in the suspended aid announced Thursday by Nauert.

This is not the first time the U.S. has cut assistance to Pakistan. In the 1990s, Washington imposed aid-cutting sanctions related to Pakistan's nuclear program and a military coup that deposed an elected prime minister.

The George W. Bush administration waived those sanctions and reinstated aid following the terrorist attacks of Sept. 11, 2001, but reduced it in 2008. During President Barack Obama's first term in office, aid levels rose again but then dropped drastically after the 2011 U.S. raid in Abbottabad, Pakistan, that killed Osama bin Laden.

Since 2002, U.S. aid to Pakistan has totaled nearly $34 billion but declined in recent years, according to the Congressional Research Service. The country received more than $1 billion in U.S. assistance in 2016.

Relations between Pakistan and the U.S. long have been strained, and tensions have only grown since the summer, when the Trump administration announced its policy on Afghanistan and South Asia.

Pakistan, which serves as a key transport route for supplies to U.S. forces in Afghanistan, denies harboring terrorists. Officials say the country has made enormous sacrifices to support the U.S. war on terror.

"We have contributed and sacrificed the most in fighting international terrorism and carried out the largest counterterrorism operation anywhere in the world," Pakistan's U.N. Ambassador Maleeha Lodhi said Wednesday. "We can review our cooperation if it is not appreciated."

"You carried out 57,800 attacks on Afghanistan from our bases, your forces were supplied arms and explosives through our soil, thousands of our civilians and soldiers became victims of the war initiated by you," Pakistan's Foreign Minister Khawaja Asif tweeted in Urdu on Wednesday morning.

Meanwhile, the State Department on Thursday also placed Pakistan on a "special watch list for severe violations of religious freedom," Nauert said in a statement. Conditions for the country's religious minorities, including Hindus, Christians and Ahmadis, are widely considered poor.