Accessibility links
Blizzard Conditions Hit New England As Massive Winter Storm Travels North : The Two-Way As the "bomb cyclone" intensifies, visibility has dropped to nearly zero in some sections of the snow band. Serious flooding and hurricane-force winds have been observed in coastal Massachusetts.

A massive winter storm has brought hurricane-force winds, blizzard conditions and damaging coastal flooding to eastern New England, one day after it delivered unusual cold and snow to the South.

The National Weather Service says snow in the Northeast will end Thursday night, but it will be followed by strong winds and arctic air "resulting in dangerously cold wind chills" throughout the weekend.

Wind gusts of more than 70 mph were detected in some places in New England, according to The Associated Press. High winds are expected to increase the possibility of power outages.

"Blizzard to near-blizzard conditions will likely persist into the evening hours from eastern Massachusetts to Maine," the weather service says. 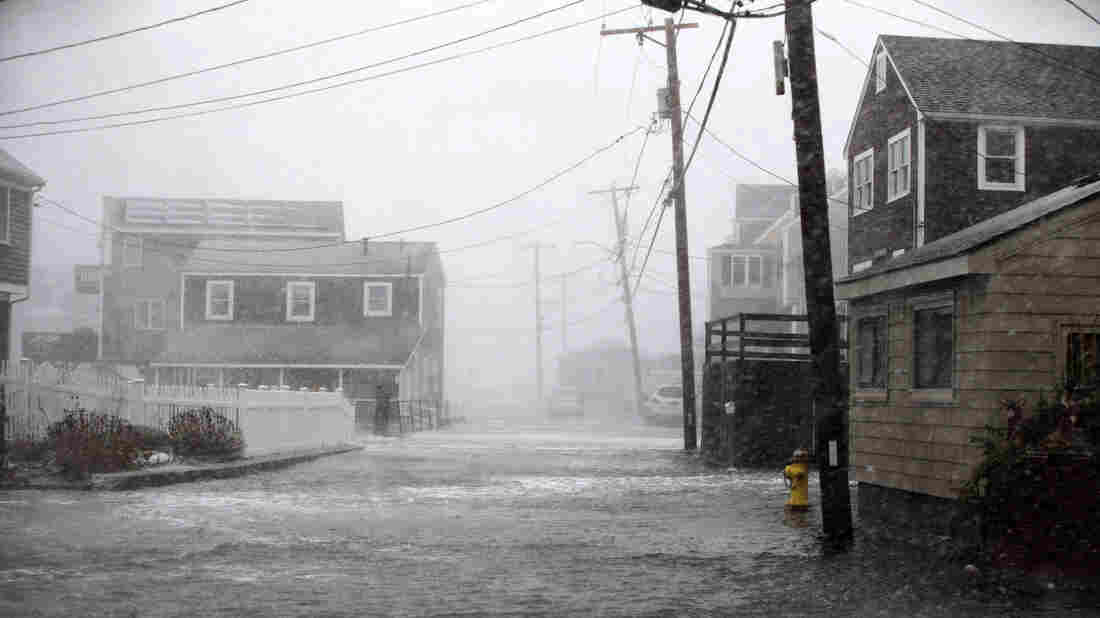 A road begins to flood in Scituate, Mass., during a massive winter storm on Thursday. Scott Eisen/Getty Images hide caption 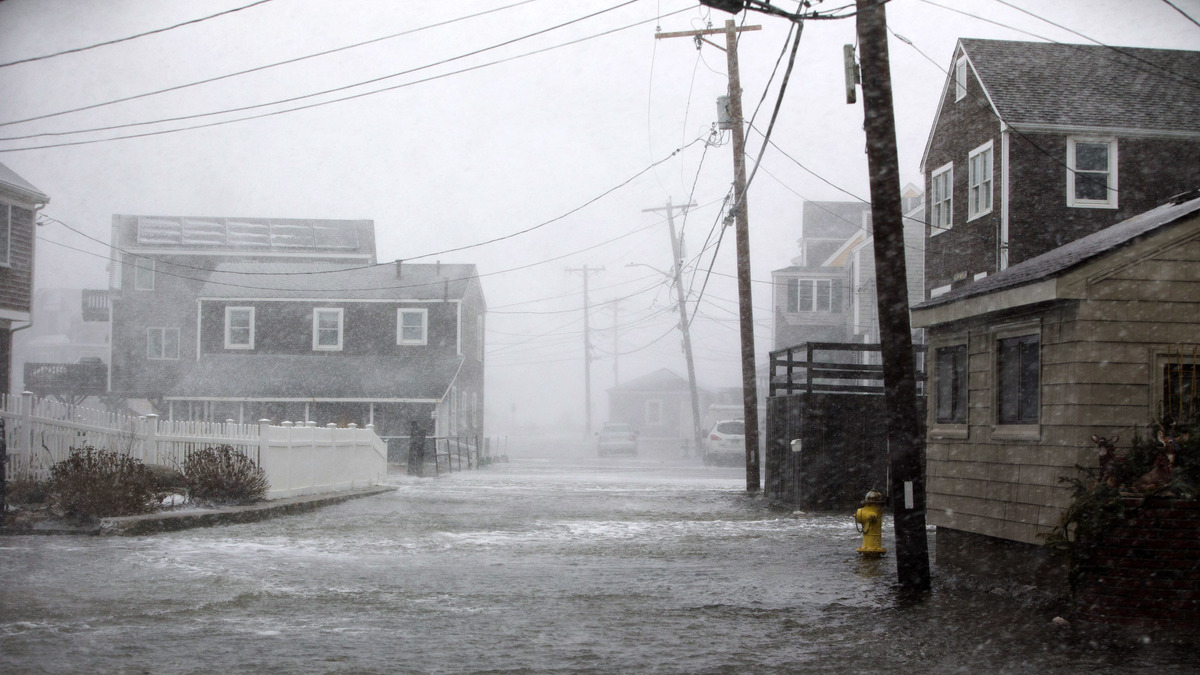 A road begins to flood in Scituate, Mass., during a massive winter storm on Thursday.

The storm has caused four deaths in North and South Carolina and another in Pennsylvania. Reuters reports the cold snap across much of the country has killed more than a dozen people.

Coastal Massachusetts is also experiencing "major and destructive" flooding, brought by a combination of high tide and waves from the storm, the Weather Service says. Some roads have become impassable.

"In Scituate, the National Guard was deployed after the town's sea wall was breached along Oceanside Drive. Local officials in Plymouth, Marshfield, Eastham, and Chatham — among other communities — reported flooding described as 'major.'"

According to the National Weather Service in Boston, the city may have set a high-tide record, although it will need to be confirmed.

The Globe reports that some Boston train stations had to be shut down because of flooding, which affected multiple streets in the city's downtown. Large chunks of ice were seen on a downtown street.

But brutal winter weather is par for the course in Boston, and some residents are braving the elements, the AP writes:

"Qizuyu Fan, who hails from a Chinese city near the border with Russia, said Thursday afternoon he wasn't fazed by the tough weather. It's nothing compared to what he's had to deal with at home, where temperatures are often well below zero in the winter, he said.

" 'This is like October in my hometown,' Fan said. 'It's great because the snow is very heavy but the temperature is not very low.'

"The 21-year-old Boston Children's Hospital research student was out getting groceries but planned to spend a good part of the day playing in the snow."

The winter storm off the East coast has deepened ~24 millibars in a mere 7 hours. It is very rare for a storm to intensify so fast (usually 24 millibars in 24 hours is the standard for a rapidly intensifying storm). For all our friends out east...stay safe! pic.twitter.com/hgT7jmcA20

Meanwhile, NWS Boston advised residents, "We do not recommend going out and floating on icebergs; this is a very dangerous situation along the coastline with major flooding ongoing."

As the snow began tapering off, Weather Service officials tweeted warnings to residents to shovel snow safely, check batteries in carbon monoxide and fire detectors and clear snow and ice from vents outside of homes.

The rate at which the storm has intensified is unusual — the Capital Weather Gang at The Washington Post called it "astonishing." A storm can be classified as a "bomb cyclone," or a particularly fast-forming storm, if the pressure drops 24 millibars in 24 hours. This storm has more than doubled that pace.

"This storm's pressure tanked 53 millibars in 21 hours (and 59 millibars in 24 hours), which puts it into the upper echelon of the most explosive East Coast storms ever observed — and perhaps even at the top," the Post writes.

The NWS in Boston calls this storm "impressive, explosive" and "high-impact."

Wondering about the shape of the #blizzard? The powerful midlatitude #BombCyclone has several meso-vortices spinning within its center, #GOESEast ABI captured these images of the storm every minute today. #snowday See more #cool GOES imagery here: https://t.co/mbgRYot60A pic.twitter.com/Zzab51uurp

Thousands of flights have been canceled. Across the Northeast, schools are shuttered, salt has been spread, and local officials are pleading with residents to stay off the streets if they can.

There is near-zero visibility in some of the snow bands passing over the states from New Jersey to Maine, the weather service says.

Earlier in the day, NPR's Hansi Lo Wang reported that it wasn't just the ice and cold that authorities were worried about:

"Connecticut Governor Dan Malloy says drivers should be prepared for strong winds: 'I would ask folks who don't need to be on the highway, and this includes trucks particularly in a high-wind situation, that if you can delay that delivery or delay that travel that you do that.'

"Winds with gusts as high as 75 miles per hour are forecast for some areas. That brings the risk of power outages from downed power lines. Malloy says wind conditions may make it difficult for utility workers to quickly restore power."

"The city's Department of Education is shuttering schools all day Thursday as the powerful nor'easter moves through the New York/New Jersey region. Many area schools are closed for the day.

"At the same time, Mayor [Bill] de Blasio is urging people not to drive and to minimize their time outside.

" 'Bottom line is to take this storm very seriously. Very cold temperatures — definitely a major amount of snow — could get to be a lot more. Wind gusts up to 40 miles-per-hour — this is serious stuff. Asking all New Yorkers to take precautions. Lookout for your neighbors as well,' de Blasio said."