Accessibility links
Judge Dismisses Federal Case Against Cliven Bundy And Sons, Bars Retrial : The Two-Way Less than a month after declaring a mistrial, Judge Gloria Navarro said there can be no retrial against the Nevada rancher and three other men, who led an armed standoff with federal agents in 2014. 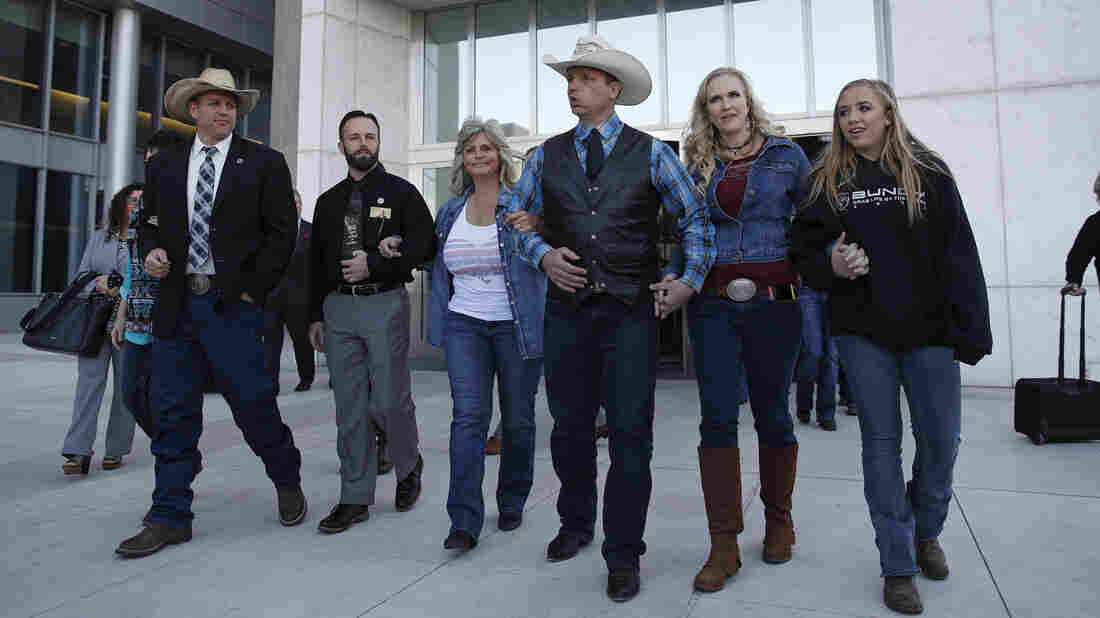 Ammon Bundy (from left), Ryan Payne and Ryan Bundy on the day a mistrial was declared last month. They were joined by Jeanette Finicum, widow of Robert "LaVoy" Finicum, and Ryan's wife and daughter. John Locher/AP hide caption Ammon Bundy (from left), Ryan Payne and Ryan Bundy on the day a mistrial was declared last month. They were joined by Jeanette Finicum, widow of Robert "LaVoy" Finicum, and Ryan's wife and daughter.

Less than one month after U.S. District Judge Gloria Navarro declared a mistrial in the case against Cliven Bundy, his two sons, and a self-styled militiaman, Navarro has dismissed the charges entirely. The decision Monday puts an end to the federal case against the four men for their role in the 2014 armed standoff over cattle-grazing rights in Nevada.

Navarro found that the prosecution had committed "flagrant misconduct" by withholding evidence that could have supported the defendants' case. Namely, Navarro explained that federal prosecutors had failed to disclose information from cameras recording video from the standoff and the presence of federal snipers around the Bundy Ranch.

Navarro ruled that as a result, the men, who had been slapped with felony conspiracy and firearms charges, could not receive a fair trial. She dismissed the charges "with prejudice," which specifically bars the possibility of bringing a new trial against them.

"The court finds that the universal sense of justice has been violated," Navarro said Monday, according to The Los Angeles Times.

The courtroom drama comes more than three years after a tense confrontation unfolded in a different venue — the Nevada desert.

Cliven Bundy has refused to recognize the government's control over U.S. public lands since the 1990s, racking up roughly $1 million in unpaid grazing lease fees and fines. In April 2014, federal agents demanded Bundy remove his cattle from those public lands — only to be met with a group of Bundy's armed followers, including his sons Ammon and Ryan and a man named Ryan Payne.

A weekslong standoff ensued, ending only when the federal government backed down — though the men were arrested nearly two years later.

As the Two-Way reported last month, the attempts to prosecute the Bundys have met with multiple failures:

"Ammon and Ryan Bundy, along with several other codefendants, were acquitted last year on similar — but separate — charges for their role in the 2016 armed occupation of Oregon's Malheur National Wildlife Refuge. While two of their fellow occupiers were later convicted on federal conspiracy charges, the brothers Bundy had successfully argued that they were simply exercising their First and Second Amendment rights during that 41-day standoff.

"They remained on the hook for charges related to the 2014 Nevada standoff — though prosecutors there experienced several starts and stops of their own even before [a mistrial was declared]."

Of the six other men who faced a trial for their role in the 2014 confrontation, only two were convicted of some charges — and none of them was convicted of conspiracy.

Monday's ruling proved the coup de grace, capping the series of legal stumbles and inspiring concerns from officials in the region. Specifically, many current and retired federal land managers worry the failure to prosecute Bundy could jeopardize the safety of federal field workers in the West.

For the Bundys, however, the moment marked a significant victory. They left the courthouse after the ruling bearing smiles and vows to continue fighting what they see as federal overreach.

"I want to say this: We have rights," Ammon Bundy told reporters, with a Bible tucked in one armpit. "We're not going to walk away from them and just let them be taken."