Accessibility links
A Young Girl's Rape And Murder Have Catalyzed Countrywide Outrage In Pakistan : The Two-Way Days after Zainab went missing, police found her body in a trash heap. Now, many Pakistanis are challenging the government inaction they believe led to her death — and the deaths of many like her. 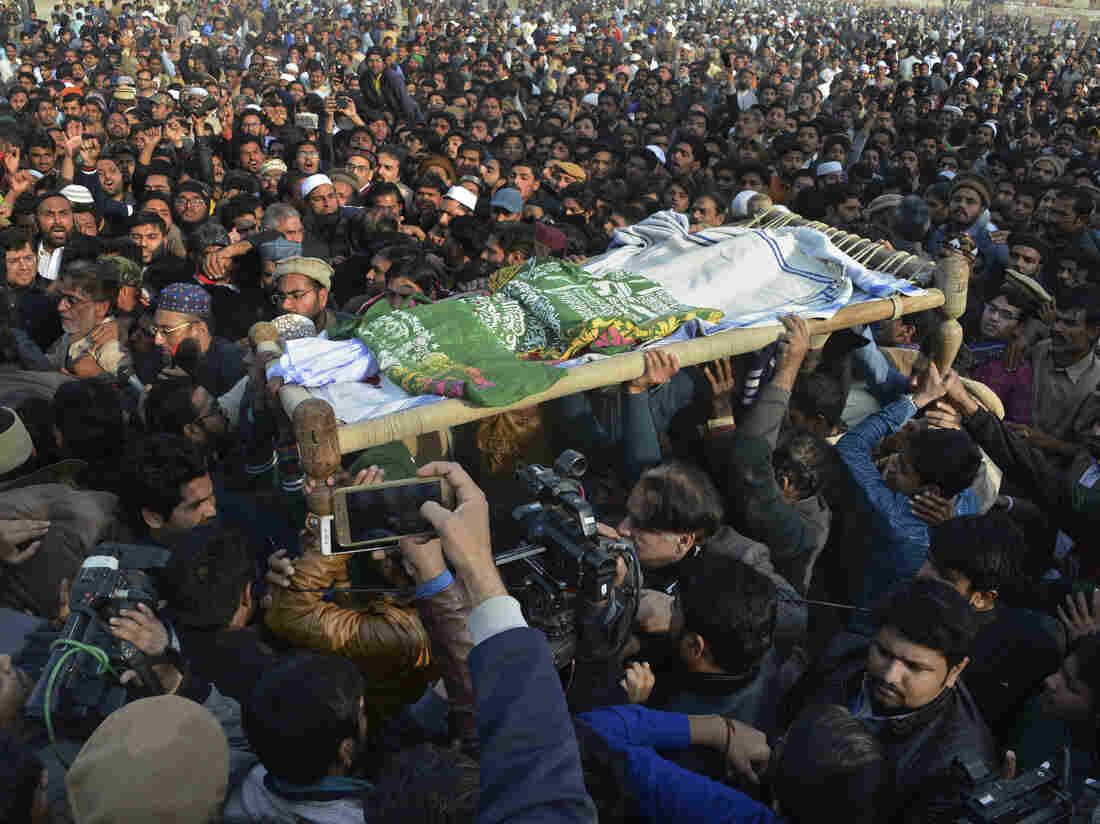 The funeral for the girl who was raped and killed in Kasur, Pakistan, drew people from across the city Wednesday. Outrage over the attack has prompted clashes between protesters and police. Qazi Mehmood/AP hide caption 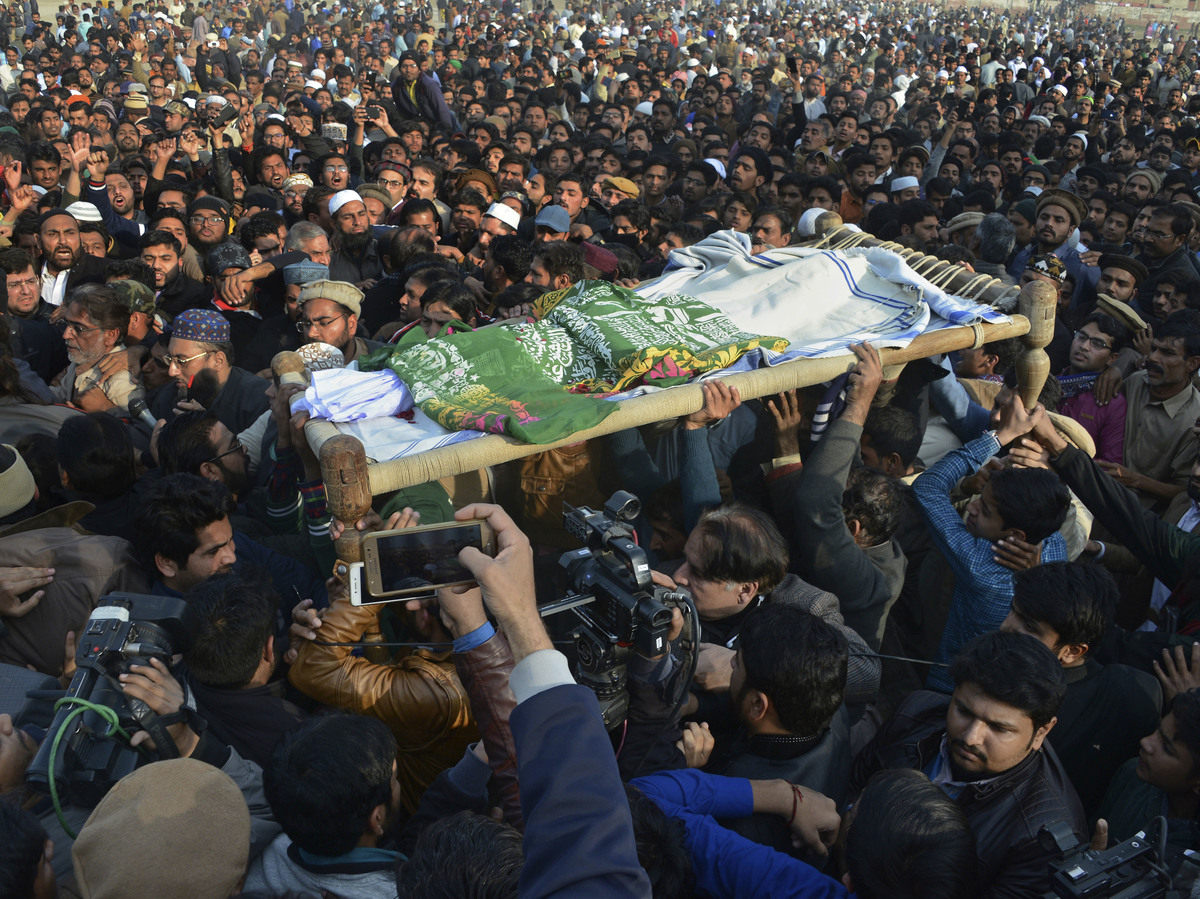 The funeral for the girl who was raped and killed in Kasur, Pakistan, drew people from across the city Wednesday. Outrage over the attack has prompted clashes between protesters and police.

Two days after a young girl named Zainab was discovered dead in a trash heap in the city of Kasur, strangled after a brutal rape, widespread shock has escalated into protests across Pakistan. Outraged at the perceived inaction of local authorities, demonstrators have amplified the rage and despair of the girl's father.

"Security is only provided to the leaders in Pakistan ... and we [the public] are just like insects," her father, Ameen Ansari, told local media Wednesday. Despite the funeral for his daughter, which drew mourners from across Kasur, he added: "We will not bury her until we get justice."

This is the photo everyone should be sharing of beloved #Zainab not the ones of her dead body. It’s disgraceful, disrespectful and just plain wrong for anyone to share such photos. Please spread the message. #justiceforzainab #zainab pic.twitter.com/tXnUOCxUfk

Zainab, who has been generally referred to by first name only and whose age has been variously reported as between 6 and 8 years old, went missing last week after she left her home for a regular religious study session. With her parents on a pilgrimage in Saudi Arabia last week, she had been staying with extended family — who soon reported her disappearance to the police.

On Tuesday, the search for her yielded a horrible discovery: her body, found in a garbage dump not far from her home. CCTV footage appeared to show her abduction, with an unidentified man leading her by the hand, and police investigations later revealed evidence of rape and strangulation.

A British Pakistani Artist makes a sketch of the Culprit.#JusticeForZainab pic.twitter.com/nz746NMOhG

Authorities have not yet arrested a suspect for the crime — though the government of Punjab, Kasur's province, has promised that "this case will reach its logical end soon & the perpetrators will be given severest punishment."

Such vows have done little to mollify residents. Dawn, a Pakistani newspaper, described the chaotic scenes that erupted in the city's streets as anger mounted:

"As word got around, traders shuttered their shops and staged a protest demonstration. Scores of other people also gathered at Steel Bagh Mor near the hospital and protested with the girl's body in the middle of the road. They also threw traffic out of gear by burning tires on Ferozepur Road and chanted slogans against police and local parliamentarians for their alleged apathy."

The demonstrations developed into outright clashes with police, as a group broke out sticks and stones in an attempt to storm the local deputy commissioner's office. At least two people were killed, and at least two others were injured when several police officers fired straight into the crowd — an act recorded by video cameras on the scene.

The Punjab government says it has arrested the officers who allegedly fired.

The four accused policemen who opened fire on protestors in Kasur yesterday have been arrested and being interrogated. JIT, comprising officials from Police & intelligence agencies, are working on Zainab murder case #JusticeForZainab pic.twitter.com/R3VVFUUhQo

Elsewhere in the country, similar demonstrations gained momentum on Wednesday and Thursday. Footage emerged of protests in Lahore, Peshawar and the capital, Islamabad, and other cities across Pakistan.

Nearly everywhere, the refrain was the same: The government must not only bring this killer to justice — it must also do a better job to protect its citizens. Kiran Naz, an anchor on a local news program, even delivered her broadcast with her daughter on her lap in pointed protest.

Not often that you see a TV news anchor bring her own child to her news cast - @SAMAATV 's Kiran Naz did precisely that to make a point about how she felt as a mother in Pakistan #JusticeForZainab #Justice4Zainab pic.twitter.com/6XMXQJmfzV

"This has to stop," tweeted Nobel Peace Prize winner Malala Yousafzai, who hails from Pakistan and said Wednesday she was "heartbroken" to hear of the girl's killing. "Gov and the concerned authorities must take action."

On Twitter, the hashtag #JusticeForZainab has been deployed as a means for people to mourn her death — and to call attention to other, similar crimes continuing to unfold in the province of Punjab.

In fact, Kasur itself has a deep history with child sex abuse crimes, as the German broadcaster Deutsche Welle explains:

"The city of Kasur came to the world's attention in August 2015, via a child abuse and extortion scandal involving at least 280 children who were filmed while being sexually abused by a gang of men. The men then blackmailed the children's parents by threatening to release the videos.

"Regarded as Pakistan's largest child abuse scandal, it came to light after victims' parents clashed with police, accusing authorities of failing to prosecute the case."

Pakistan's Express-Tribune reports there were also 111 cases of sexual assault in Kasur and other districts in Punjab last year alone. And Dawn points out that in the past year, 11 other girls have been discovered murdered in the same area of Kasur under similar circumstances as Zainab.

"Those societies that cannot protect its children are eternally condemned," Punjab Chief Minister Shehbaz Sharif said in a series of tweets Wednesday.

"I want the culprits involved in this heinous crime behind the bars," he added. Those failing in their duties will be proceeded against. Very painful incident!"

In televised comments, Zainab's father laid bare the stakes of the simmering unrest.

"We are now afraid of letting our children leave the home," he said. "How was our child kidnapped from a busy market?"