Accessibility links
Missouri Governor Confirms Affair, Denies Allegations Of Blackmail : The Two-Way On Wednesday night, a St. Louis TV station reported that Gov. Eric Greitens had an affair before he took office and that he had threatened to release a nude photo of the woman if she told anyone. 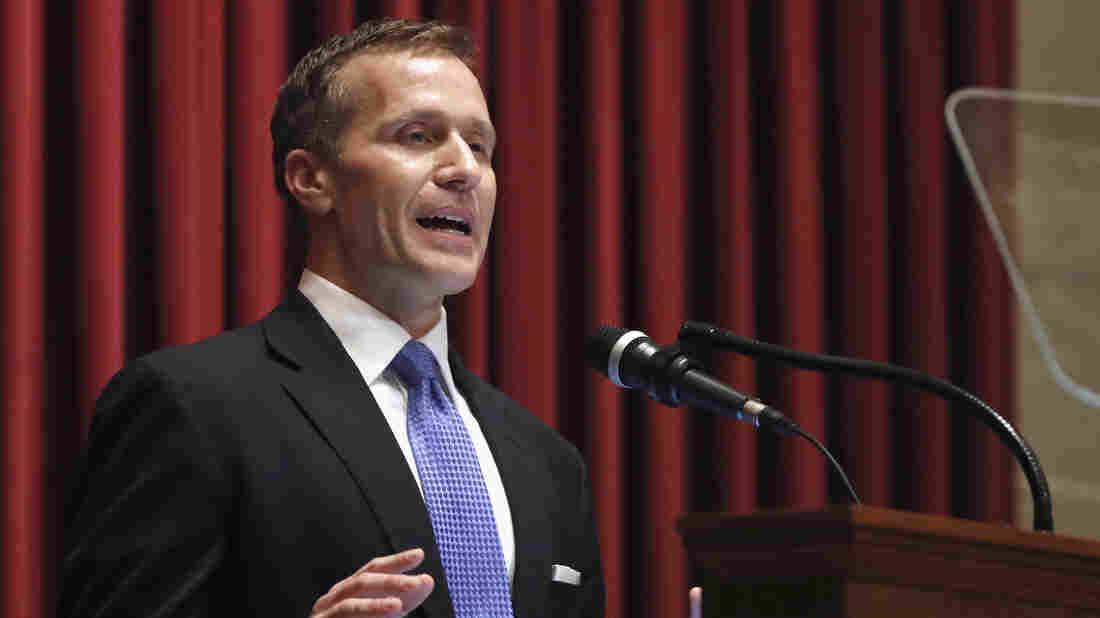 Missouri Gov. Eric Greitens delivers the annual State of the State address on Jan. 8. Responding to a news report that overshadowed the speech, Greitens acknowledged he had been "unfaithful" in his marriage but denied allegations that he blackmailed the woman to stay quiet. Jeff Roberson/AP hide caption 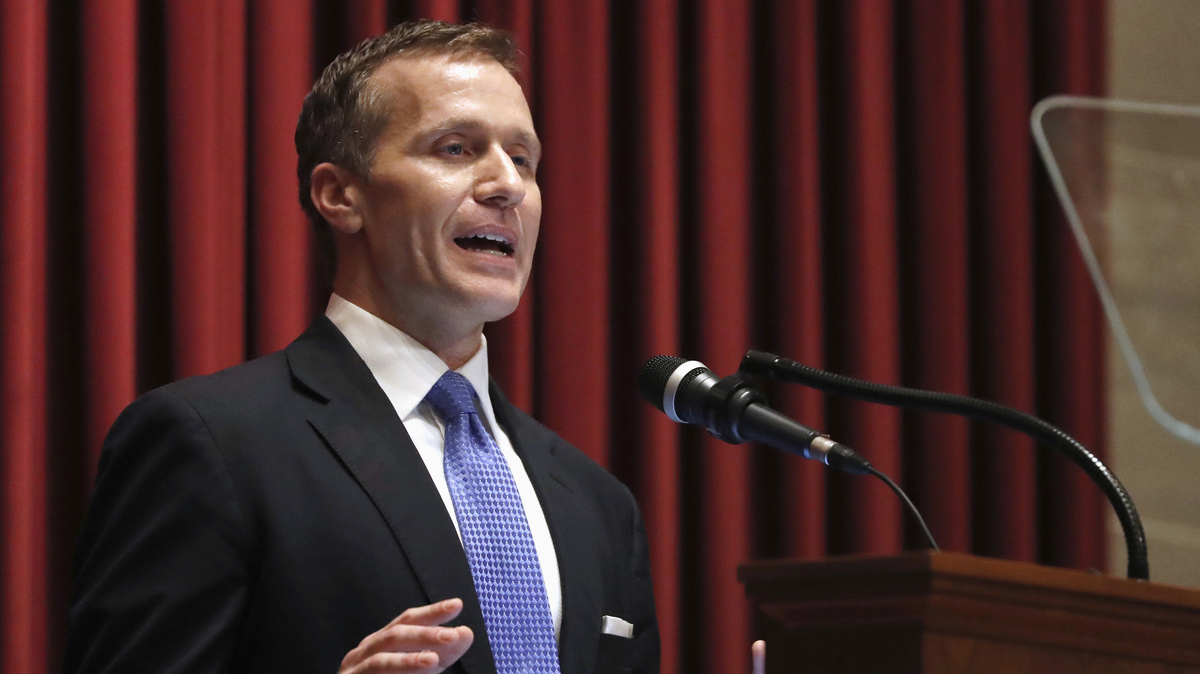 Missouri Gov. Eric Greitens delivers the annual State of the State address on Jan. 8. Responding to a news report that overshadowed the speech, Greitens acknowledged he had been "unfaithful" in his marriage but denied allegations that he blackmailed the woman to stay quiet.

Missouri Gov. Eric Greitens has confirmed that he had an extramarital affair before he was elected in 2016 — but he denies allegations that he used a naked photo to threaten to blackmail the woman he was sleeping with.

The governor is responding to an investigation by TV station KMOV in St. Louis. The report, released on Wednesday night, was based on audio recordings of the woman who was allegedly involved in the affair, as well as interviews with her ex-husband.

The woman herself did not participate in the story, and KMOV says the audio was recorded without her permission. The St. Louis Post-Dispatch also has the audio and has spoken with the ex-husband; the newspaper says it opted not to publish a story because the woman, allegedly Greitens' former hairstylist, declined to be interviewed.

In the audio recordings, the woman tells her then-husband she had a sexual encounter with Greitens at his house in which he blindfolded her and bound her hands.

"He stepped back, I saw a flash through the blindfold and he said: 'You're never going to mention my name,' otherwise there will be pictures of me everywhere," the woman says, audibly weeping as she speaks.

She said Greitens later apologized and told her he had deleted the photo, KMOV reports.

In responses posted on Twitter hours after the story broke, Greitens admitted to having an affair, but his lawyer strenuously denied allegations of blackmail.

"Greitens' attorney forcefully denied that any picture was taken or that Greitens threatened the woman against revealing the affair," Jason Rosenbaum of St. Louis Public Radio reports for NPR.

The allegations have prompted calls for Greitens to resign. Rosenbaum reports:

"Sen. Jamilah Nasheed says the first-term chief executive should step aside — especially after he emphasized his family during his campaign.

" 'And the Me Too Movement that's going on throughout the country, now that Me Too movement is in the governor's mansion?' [Nasheed said.] 'That shouldn't be happening.' "

Greitens is a former Democrat who announced in 2015 that he had become a conservative Republican.

In addition to the audio recordings, KMOV and the Post-Dispatch also have an email the woman apparently sent to Greitens in 2015, asking him to stop making appointments at her hair salon and telling him, "I need to move forward in my life."

Greitens and his wife responded to the report in a joint statement, saying "there was a time when he was unfaithful in our marriage. This was a deeply personal mistake."

"The claim that this nearly three-year-old story has generated or should generate law enforcement interest is completely false," the lawyer, James Bennett, wrote. "There was no 'blackmail,' and that claim is false."

In a statement to Rosenbaum, Bennett says the governor "is in no way considering resigning."

Greitens' wife, Sheena, released a statement of her own that asked "the media and those who wish to peddle gossip to stay away from me and my children."

Rosenbaum says Greitens may find himself isolated from other Republicans as this scandal unfolds:

"Greitens isn't getting a lot of vocal support from Republicans controlling Missouri's Legislature. When he ran for office, Greitens railed against 'career politicians.' And it didn't stop after he was elected.

"Missouri Lt. Gov. Mike Parson is a Republican, like Greitens. So there may not be an incentive for the governor's GOP colleagues to keep him in office."