Accessibility links
State Dept. Won't Disavow New Diplomat Pete Hoekstra's False Claim on Muslim 'No-Go Zones' : The Two-Way Ambassador Pete Hoekstra wouldn't say his claim that Muslims in the Netherlands had "no-go zones" and politicians were "being burned" was unfounded, but he apologized for the statement. 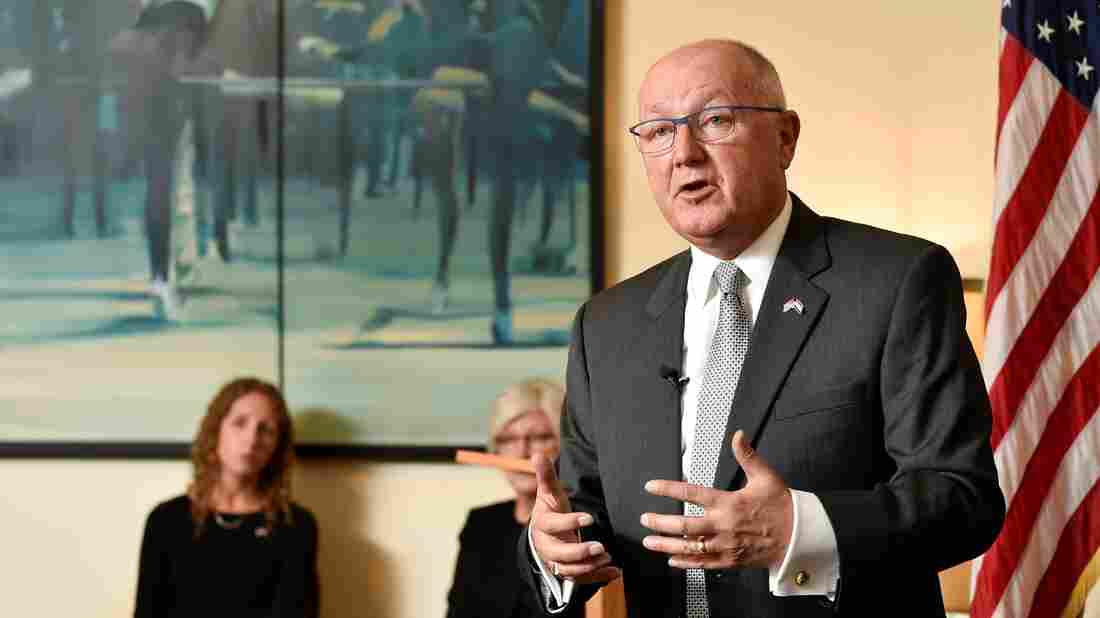 U.S. Ambassador to the Netherlands Peter Hoekstra had a tense news conference Wednesday when Dutch reporters pressed him on anti-Muslim comments he made in 2015. John Thys/AFP/Getty Images hide caption 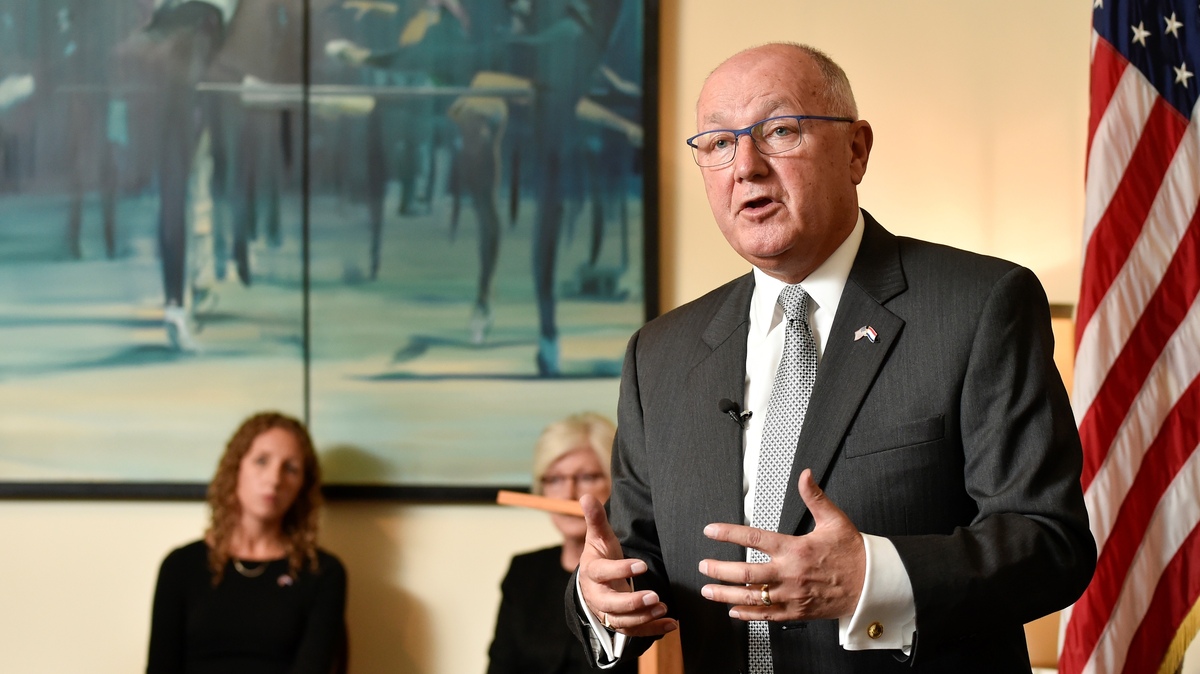 U.S. Ambassador to the Netherlands Peter Hoekstra had a tense news conference Wednesday when Dutch reporters pressed him on anti-Muslim comments he made in 2015.

A State Department spokesman on Thursday said anti-Muslim comments made by President Trump's new ambassador to the Netherlands "were not the position of the State Department" — but he also declined to say the comments had been factually inaccurate.

The partial disavowal came a day after Ambassador Pete Hoekstra's first news conference in the Netherlands, in which he was pressed by Dutch reporters to retract the false claims he made in 2015 — when he said the "Islamic movement" was responsible for "no-go zones" and politicians "being burned" in the Netherlands.

"The State Department does not agree with those statements. That is not the language that we would use," the State Department's undersecretary for public diplomacy and public affairs, Steve Goldstein, told reporters in Washington on Thursday.

Goldstein was responding to questions about an event in November 2015, when Hoekstra spoke on a panel in Charleston, S.C., that was organized by the conservative David Horowitz Freedom Center. The group describes itself as a "School of Political Warfare" against enemies like the "political left."

Hoekstra's remarks were captured on video:

At a tense news conference at The Hague on Wednesday, Hoekstra told reporters that he had already "expressed my regrets and my apology for the comments that I made. And I'm not revisiting the issue."

"Are politicians being burned in the Netherlands in the past? Is that something you believe? Yes or no," a reporter asked the U.S. diplomat, in an Associated Press video of the conference.

"I'm not revisiting the issue," Hoekstra said again, adding that he had expressed regret and apology. After multiple reporters asked similar questions about the 2015 statement, Hoekstra stopped responding.

In December, a Dutch news crew asked Hoekstra about his 2015 comments, to which he replied that he "never said that." In a unique move, he later denied his denial of the comments, according to CNN.

Taking up the issue again last month, Hoekstra put out a statement saying, "I made certain remarks in 2015 and regret the exchange during the Nieuwsuur interview. Please accept my apology."

But saying you "regret" or "apologize" for something is not the same as acknowledging a factual error, a point not lost on reporters who pressed Goldstein about Hoekstra's remarks during Thursday's State Department briefing:

QUESTION: Why can't you say right now that those statements were inaccurate?

UNDERSECRETARY GOLDSTEIN: Well, I did say that. I said that's not the position of the Department of State.

UNDERSECRETARY GOLDSTEIN: I've been very clear that that's not our position. That is not language that we would use, and that's not language you will ever hear me use or [department spokeswoman Heather Nauert]  use from this podium.