Accessibility links
Gymnastics Doctor's Victims Speak, As Simone Biles Says She Was Also Abused : The Two-Way Women began speaking in court on Tuesday about the devastating impact of abuse at the hands of sports doctor and admitted sexual assaulter Larry Nassar. The list of accusers is growing longer. 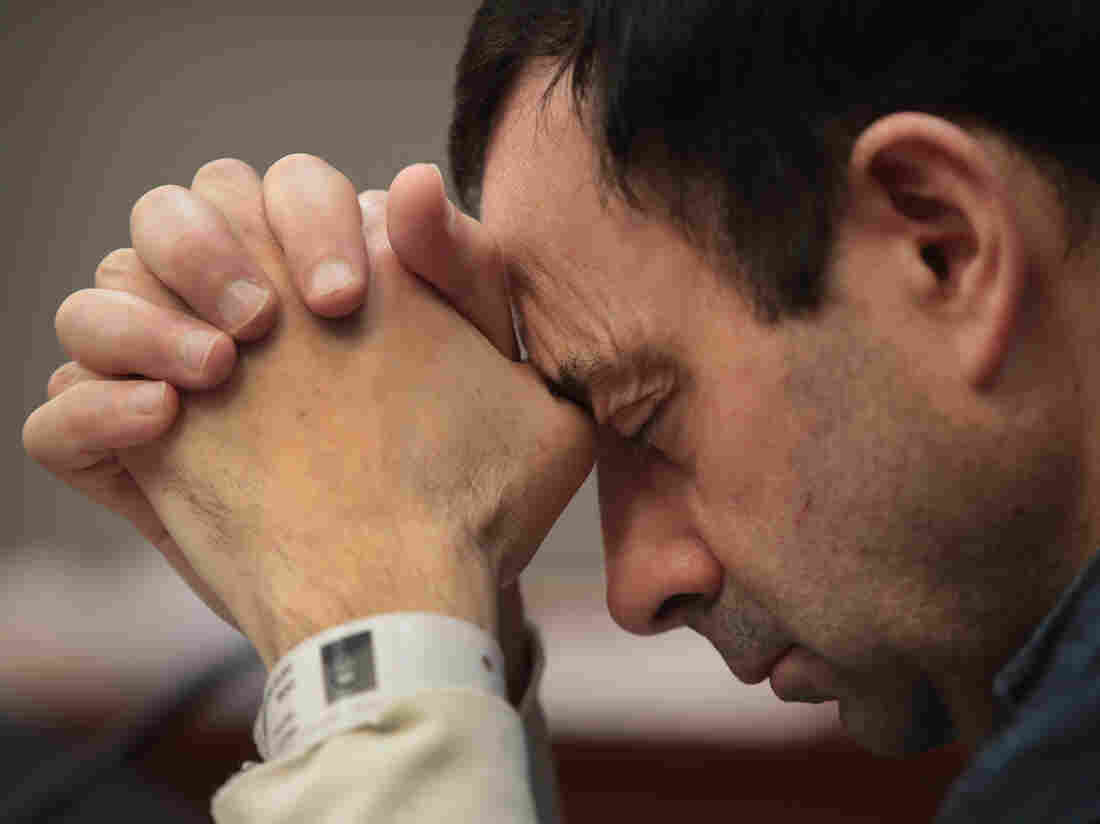 Larry Nassar listens to victim impact statements prior to being sentenced after being accused of molesting more than 140 women and girls while he was a physician for Team USA and Michigan State University. Nassar has pleaded guilty in Ingham County, Mich., to sexually assaulting seven girls, but the judge is allowing all of his accusers to speak. Scott Olson/Getty Images hide caption 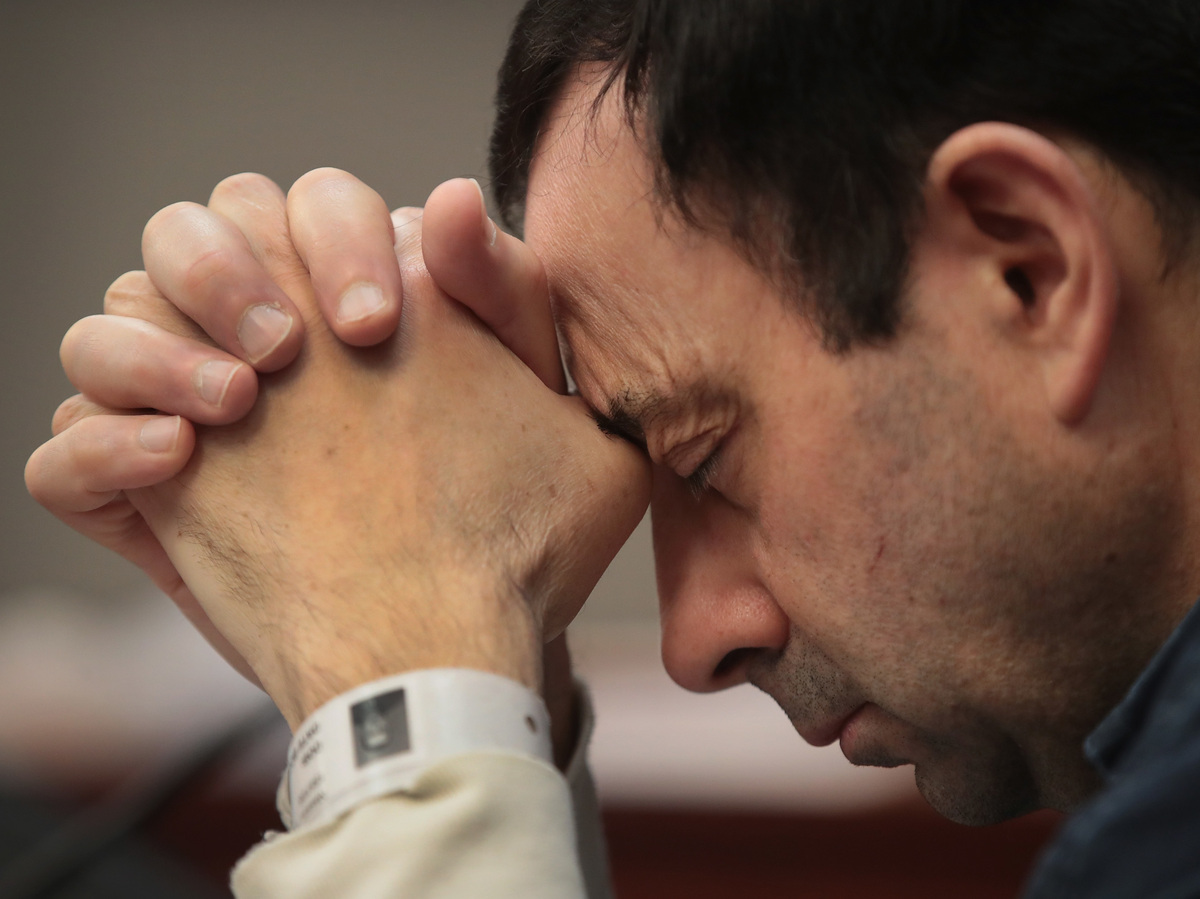 Larry Nassar listens to victim impact statements prior to being sentenced after being accused of molesting more than 140 women and girls while he was a physician for Team USA and Michigan State University. Nassar has pleaded guilty in Ingham County, Mich., to sexually assaulting seven girls, but the judge is allowing all of his accusers to speak.

Nearly 90 women who allege they were sexually assaulted by a former USA Gymnastics doctor plan to speak about the abuse during a four-day sentencing hearing that started Tuesday.

Larry Nassar is accused of sexually abusing more than 140 women and girls as the doctor for Team USA and Michigan State University.

He has pleaded guilty in Ingham County, Mich., to seven first-degree sexual assault charges. Before ordering a sentence, the judge in the case is allowing all of his accusers to speak if they want to.

The first accuser to speak was not a patient of Nassar's, but a family friend. In an emotional speech that left several people in the courtroom weeping, Kyle Stephens recounted the trauma of the first time she said she was molested at Nassar's house and the deep family rift it caused when she told her parents of the abuse and they didn't believe her.

Here's an excerpt of her testimony, via CNN. Be advised: It contains graphic details of sexual assault.

"I, too, am one of the many survivors that was sexually abused by Larry Nassar. Please believe me when i say it was a lot harder to first speak those words out loud than it is now to put them on paper. There are many reasons that i have been reluctant to share my story, but I know now that it is not my fault. ...

"For too long I've asked myself, 'Was I too naive? Was it my fault?' I now know the answer to those questions. No. No, it was not my fault. No, I will not and should not carry the guilt that belongs to Larry Nassar, USAG, and others."

Moments after Biles' post went up, Raisman, her former teammate, posted a photograph of the two Olympians holding hands.

Raisman also tweeted she will not attend the sentencing hearing "because it is too traumatic." But an impact letter she wrote will be read in court, she said.

Maroney says she suffered years of sexual abuse and "psychological trauma" perpetrated by Nassar, and in December 2016, she reached a settlement with USA Gymnastics. But according to a lawsuit, the agreement included nondisclosure and nondisparagement clauses indicating that neither she nor her parents could reveal confidential details about the contract.

That means if Maroney chooses to speak at the sentencing hearing, it could lead to a $100,000 lawsuit. That prompted model and actress Chrissy Teigen to offer to cover the cost of the fine on Maroney's behalf.

The entire principle of this should be fought - an NDA to stay quiet about this serial monster with over 140 accusers, but I would be absolutely honored to pay this fine for you, McKayla. pic.twitter.com/lsBEgEqZpD

Maroney is fighting the terms of the nondisclosure agreement in a lawsuit filed against the United States Olympic Committee, USA Gymnastics and Michigan State in December. The New York Times reports the lawsuit claims that Maroney was forced into signing the clauses and confidentiality provisions.

Nassar, 54, has admitted to sexually assaulting minors. He has already been sentenced to 60 years in prison for child pornography in a federal case.

In November he confessed to digitally penetrating a total of 10 girls between 1998 and 2015. In many cases he convinced his victims it was part of a "special" treatment. Nassar's admission was part of a plea deal in two Michigan counties, before two different judges.

"I think this is important, what I've done today to help move the community forward and away from the hurting, let the healing start," Nassar said.

"For all those involved, I'm so horribly sorry that this was like a match that turned into a forest fire out of control," he said.

The Michigan attorney general's office is seeking 40 to 125 years in prison for Nassar. The Associated Press says the maximum represents a year for each of the 125 girls and women who filed reports of abuse with Michigan State University campus police.