Accessibility links
Myanmar And Bangladesh Agree To 2-Year Timeframe For Rohingya Return : The Two-Way Over 655,000 Rohingya Muslims have fled Myanmar, where alleged ethnic cleansing is underway. Now, the two countries have agreed to a schedule for repatriation — but will the Rohingya actually return?

Myanmar And Bangladesh Agree To 2-Year Timeframe For Rohingya Return

Myanmar And Bangladesh Agree To 2-Year Timeframe For Rohingya Return 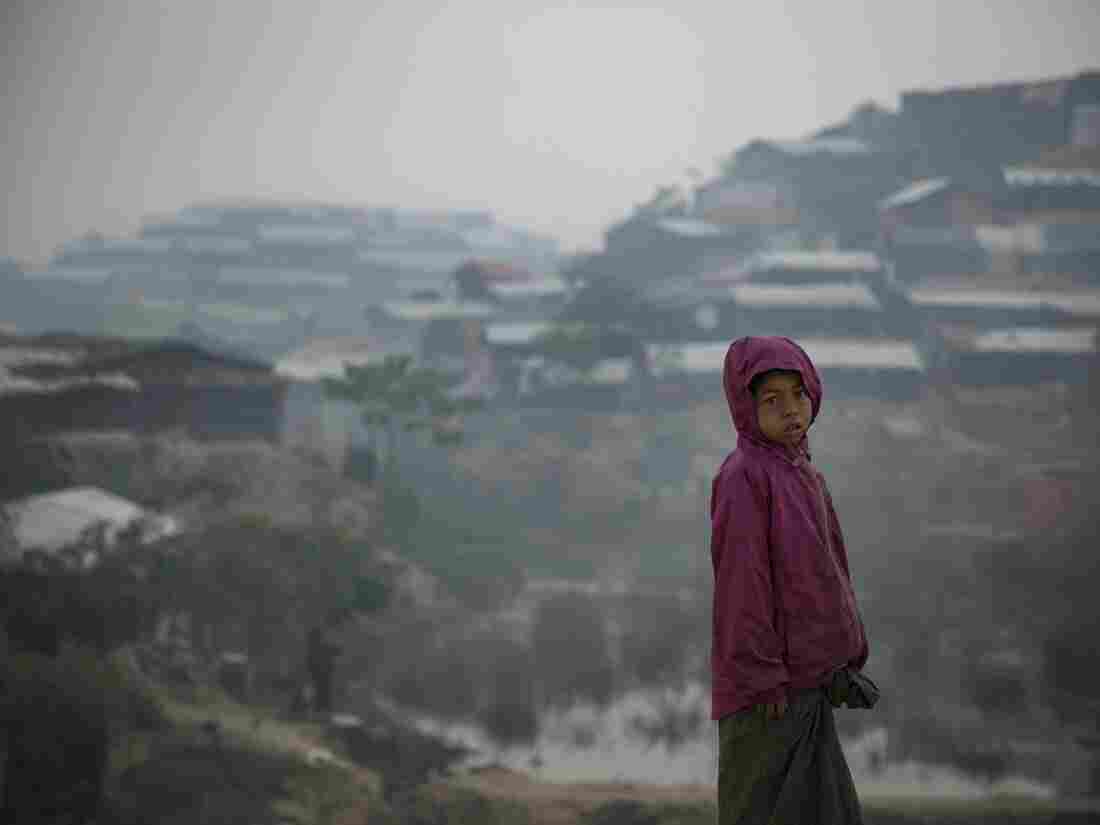 A Rohingya refugee stands in a displaced-persons camp in Cox's Bazar, Bangladesh, earlier this month. She is just one of more than 650,000 Rohingya who have fled over the border from Myanmar, where a government crackdown has spawned stories of brutal murder, rape and villages destroyed. Allison Joyce/Getty Images hide caption 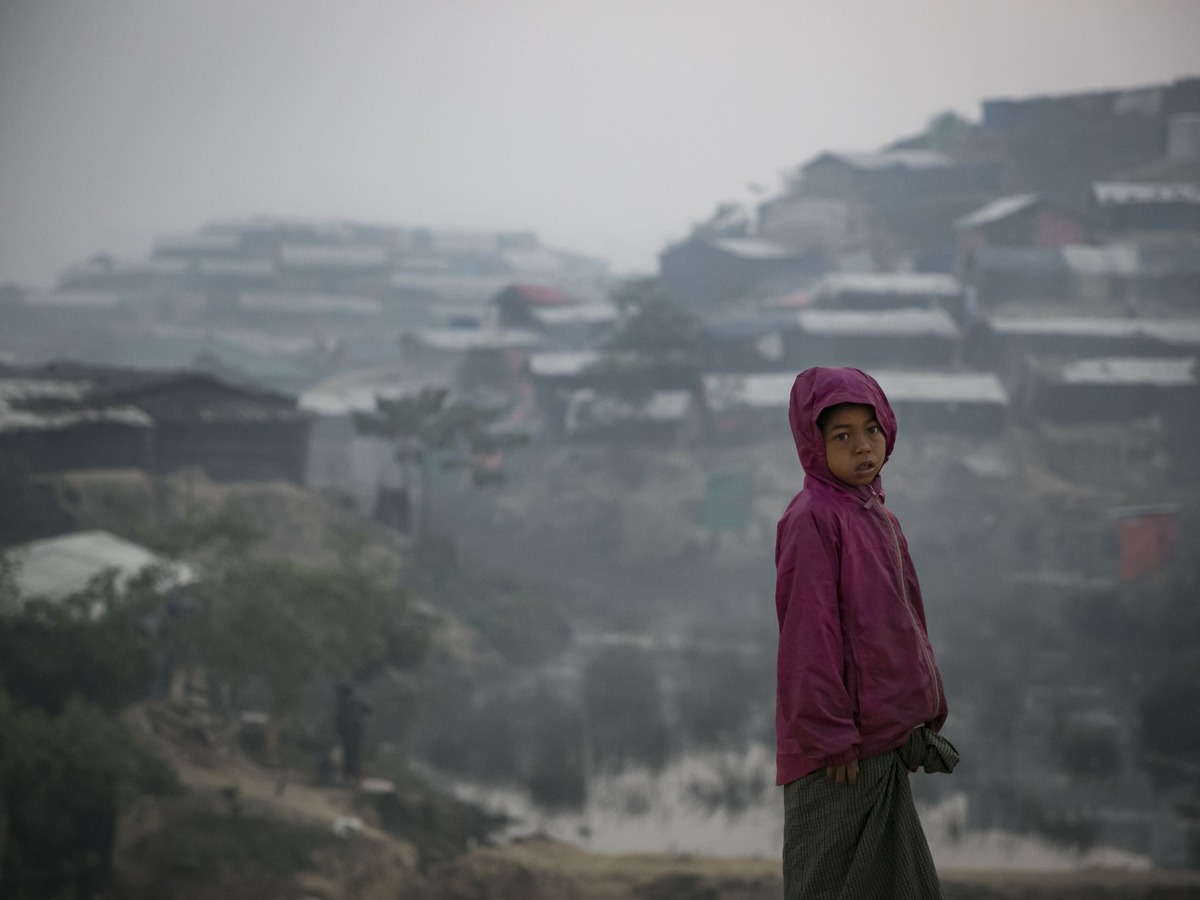 A Rohingya refugee stands in a displaced-persons camp in Cox's Bazar, Bangladesh, earlier this month. She is just one of more than 650,000 Rohingya who have fled over the border from Myanmar, where a government crackdown has spawned stories of brutal murder, rape and villages destroyed.

In less than half a year, more than 655,000 Rohingya have fled Myanmar into neighboring Bangladesh, telling horrifying stories of systematic rape, murder and arson by Myanmar's military. The "clearance operations" — which the United Nations, the U.S. and others have called "ethnic cleansing" — appear to have been aimed at removing members of the Muslim minority from the country.

Now, though, both Myanmar and Bangladesh have arranged for their return — despite concerns voiced by some international aid groups.

In an agreement Tuesday, the two countries offered details on how they expect to carry out a repatriation deal inked in November. They laid out a two-year timeframe for the return of the hundreds of thousands of Rohingya refugees now in Bangladesh.

"We have proposed to repatriate 15,000 Rohingyas every week but they [Myanmar] did not agree to it," Bangladesh Ambassador to Myanmar Sufiur Rahman said Tuesday, according to the Dhaka Tribune. "They [Myanmar] have taken some preparations for the Rohingyas. They have agreed to take back 300 Rohingyas per day. Some 1,500 Rohingyas will be sent back in a week."

"We are planning ahead to be able accept the returnees from next week and we are sure that this will be done on time," said Win Myat Aye, Myanmar's minister of social welfare, relief and resettlement, according to The Associated Press.

Still, the U.N. High Commission for Refugees cautioned that "major challenges have to be overcome."

"These include ensuring that refugees are informed about the situation in their areas of origin and potential return and consulted on their wishes; that their safety is ensured throughout — on departure, in transit and on return; and that the environment in the areas of return is conducive for safe and sustainable return," the agency's spokesperson, Andrej Mahecic, said in a statement Tuesday.

As journalist Michael Sullivan told NPR's Ari Shapiro at the time the deal was signed in November, many Rohingya would want to return — but they would also want guarantees of safety and, in many cases, rebuilt homes.

"Nine out of 10 Rohingya that I know in these camps [in Bangladesh] will say they'd rather stay in Bangladesh for one simple reason — and that reason is safety," Sullivan explained. "They know they won't be killed there."

Authorities in Myanmar continue to deny the manifold stories of rape and mass killing that have emerged since their crackdown began in August as a retaliation for attacks by Rohingya insurgents. Journalists have been barred from Rakhine state, where most of the counterinsurgency "clearance operations" have taken place.

"Where are considerations for protection of the Rohingya from Myanmar security forces who months ago were raping and killing them?" Phil Robertson, deputy Asia director at Human Rights Watch, told Reuters in response to Tuesday's agreement. "How come the discussions ignore the deprivation of rights of people held in indefinite detention, which is what these so-called 'temporary' accommodations may become?"

British lawmakers, for their part, also expressed doubts about the general situation.

"It remains unclear whether efforts by the UNHCR – or any other independent agency – to engage have been successful. It is equally unclear whether the 100,000 Rohingya are volunteers or what their interim and/or final destination and legal status will be and what arrangements might be put in place for their safety and security," the Parliament's International Development Committee said in a statement Monday.

"As it stands," the committee added, "this is a matter of grave concern to us."