Accessibility links
Majority Of National Park Service Board Resigns, Citing Administration Indifference : The Two-Way The chairman of the board, former Alaska Gov. Tony Knowles, said in a letter that the Department of the Interior showed no interest in engaging with board members. 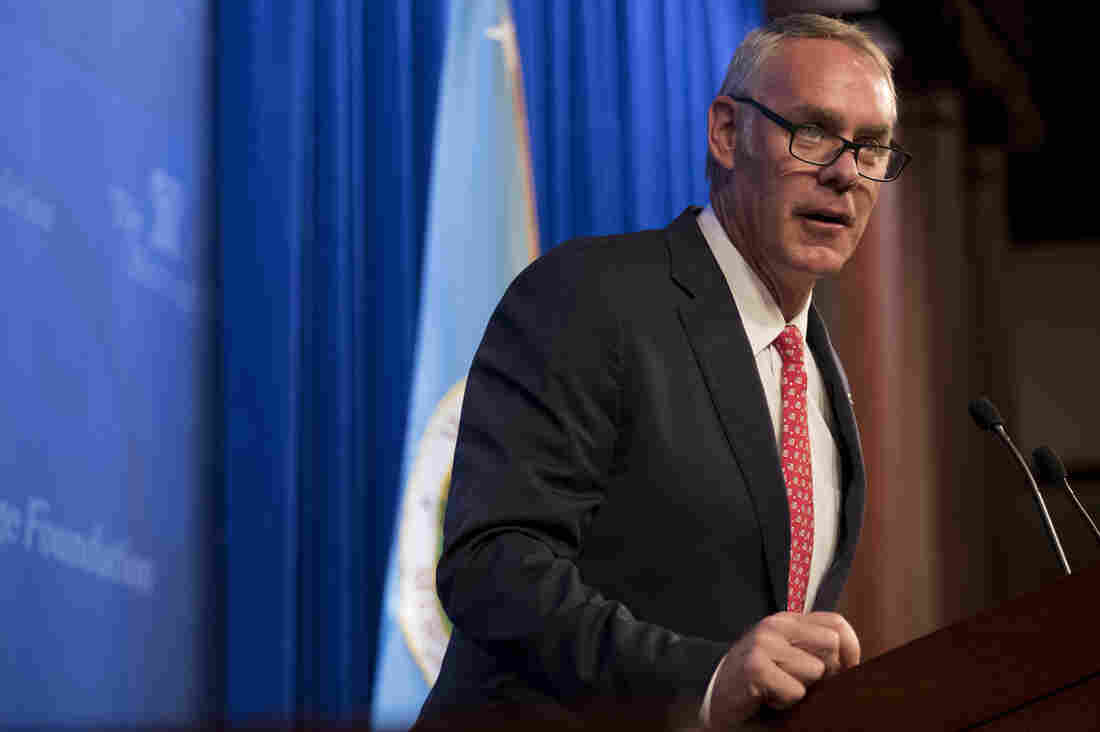 Interior Secretary Ryan Zinke speaks on the Trump administration's energy policy at the Heritage Foundation in Washington in September 2017. Nine of 12 members of the National Park Service advisory board resigned Monday citing Zinke's unwillingness to meet with the panel. Andrew Harnik/AP hide caption 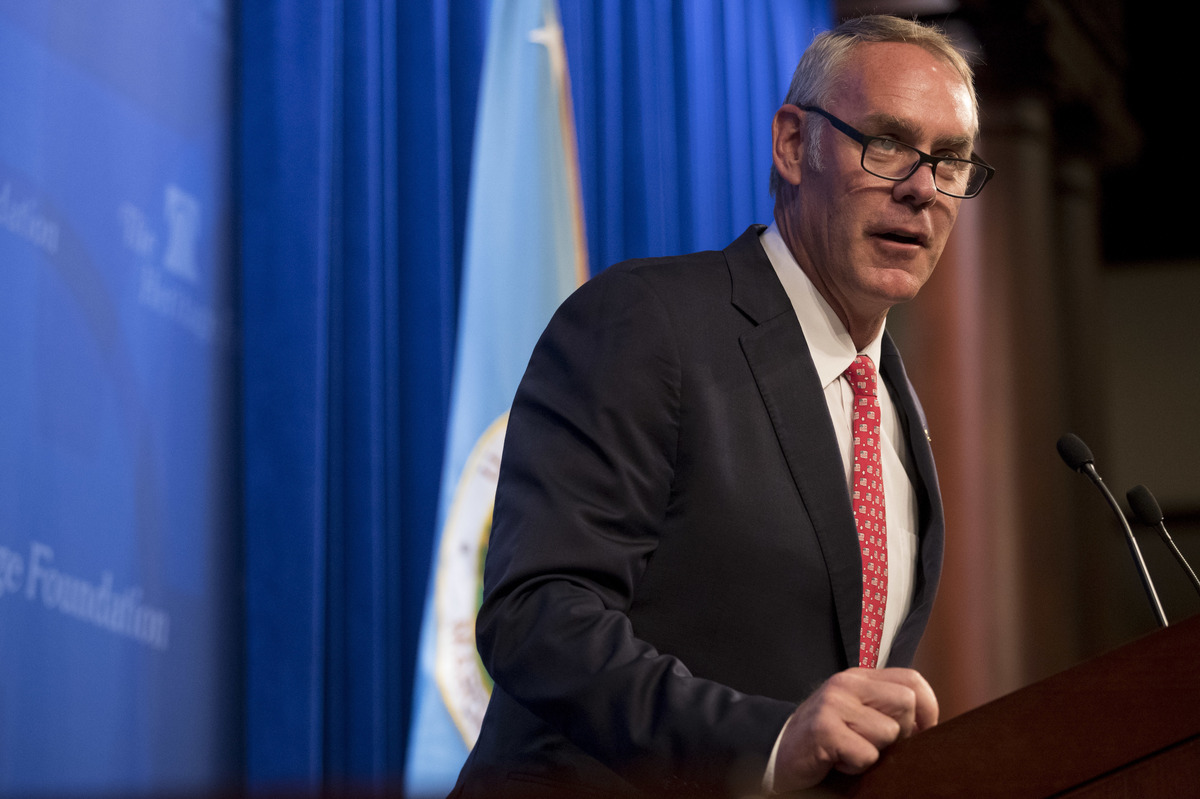 Interior Secretary Ryan Zinke speaks on the Trump administration's energy policy at the Heritage Foundation in Washington in September 2017. Nine of 12 members of the National Park Service advisory board resigned Monday citing Zinke's unwillingness to meet with the panel.

Nearly all of the seats on the U.S. National Park Service advisory board are vacant following a mass resignation Monday night, with ex-members citing Interior Secretary Ryan Zinke's unwillingness to meet with them.

Former Alaska Gov. Tony Knowles said that he and eight other members of the panel handed in their resignations. In a separate letter Wednesday, another board member, Carolyn Hessler Radelet, also quit.

The advisory board, which normally has up to 12 members and describes itself as comprising "citizen advisors chartered by Congress to help the National Park Service," has been an institution since 1935. Members of the current bipartisan iteration were appointed by President Obama and represented the geographical breadth of the U.S. and a range of research disciplines, from social science to natural resource conservation.

The terms of most of the members who quit were set to expire in May. Radelet's term would not have expired until 2021.

Knowles, in a letter of resignation to Zinke, said the board had "worked closely and productively through 2016 with dedicated National Park Service employees, an inspiring Director and a fully supportive Department."

Since then, as explained in the letter, the board had repeatedly tried and failed to secure a meeting with the new interior secretary.

"[Our] requests to engage have been ignored and the matters on which we wanted to brief the new Department team are clearly not part of the agenda," the letter reads.

Alaska Public Radio quoted Knowles as saying that the Department of the Interior "showed no interest in learning about or continuing to use the forward-thinking agenda of science, the effect of climate change, protections of the ecosystems, education."

"And it has rescinded NPS regulations of resource stewardship concerning those very things: biodiversity loss, pollution and climate change," he added.

"The three board members who did not resign include Harvard University public finance professor Linda Bilmes, University of Maryland marine science professor Rita Colwell and Carolyn Hessler Radelet, the chief executive of Project Concern International. Terms for the first two end in May, while Radelet's term does not expire until 2021.

"In an email, Bilmes said she did not resign her post because she is conducting research with other colleagues funded by the National Park Foundation, and wanted to complete her project."

How Interior Secretary Ryan Zinke's Views Have Changed Under Trump

In a statement Wednesday, Department of Interior spokesperson Heather Swift said the department welcomes the resignations. She called the board members' claim of neglect "patently false," saying the department had been working with the board as recently as earlier this month.

"The appointment of two of the individuals who claim to be resigning had already expired in July and November, and they did not seek reappointment," Swift added in her statement. "Their hollow and dishonest political stunt should be a clear indicator of the intention of this group."

E&E News points to another area of contention between the Department of the Interior and the NPS advisory board:

"At the heart of the dispute is the Trump administration's move in August to scrap a 2016 order by the Obama administration that called for a focus on climate change in managing natural resources in U.S. parks. ...

"Among other things, the order called for park managers to make decisions based 'on science, law and long-term public interest.' And it said park superintendents and other NPS leaders had to 'possess scientific literacy appropriate to their positions and resource management decision-making responsibilities.' "

Washington Sen. Maria Cantwell, a Democrat who is the ranking member on the Senate Energy and Natural Resources Committee, issued a statement of support for the resigning board members.

"The President still hasn't nominated a director for the National Park Service and Secretary Zinke has proposed tripling entrance fees at our most popular national parks," she said. "His disregard of the advisory board is just another example of why he has earned an 'F' in stewardship."

"To not have any meetings, to not have their phone calls returned, to not have any opportunity to have an audience with the officials at the interior department is really a slap in the face and I think sometimes you have to make a statement," Sally Jewell, the secretary of the interior during President Obama's second term, told NPR's Here and Now on Wednesday.

"They were being ignored, and I have to believe that's consistent with what this administration has done with other advisory boards and councils in other agencies, as well," she said.

Since taking office, President Trump has sought to roll back protections of national parks and public lands under the auspices of the Department of the Interior. The administration has ordered a dramatic downsizing of two massive national monuments in Utah and has announced plans to open up oil drilling in protected areas of the Arctic and the Atlantic.

"If we lose the people with the knowledge and the ability to educate the next generation of young people, to appreciate our history, our culture, our natural world," Jewell said, "then we lose the value of the national parks."

Swift has vowed to "fast-track filling these new vacancies with people who are actually dedicated to working with the Department to better our national parks."

The department has also moved to renew the board's charter.

"The advice and recommendations provided by the Board and its subcommittees fulfill an important need within the Department of the Interior and the National Park Service," Zinke said in a document dated Jan. 4 and published in the Federal Register on Wednesday, "and it is necessary to re-establish the Board to ensure its work is not disrupted."