Accessibility links
Man Pulls 5 1/2-Foot-Long Tapeworm Out Of His Body, Blames Sushi Habit : The Two-Way A recent podcast episode shared, in grisly detail, the story of a California man who discovered a parasitic worm wriggling out of him. He and his doctor suspect raw salmon was the culprit. 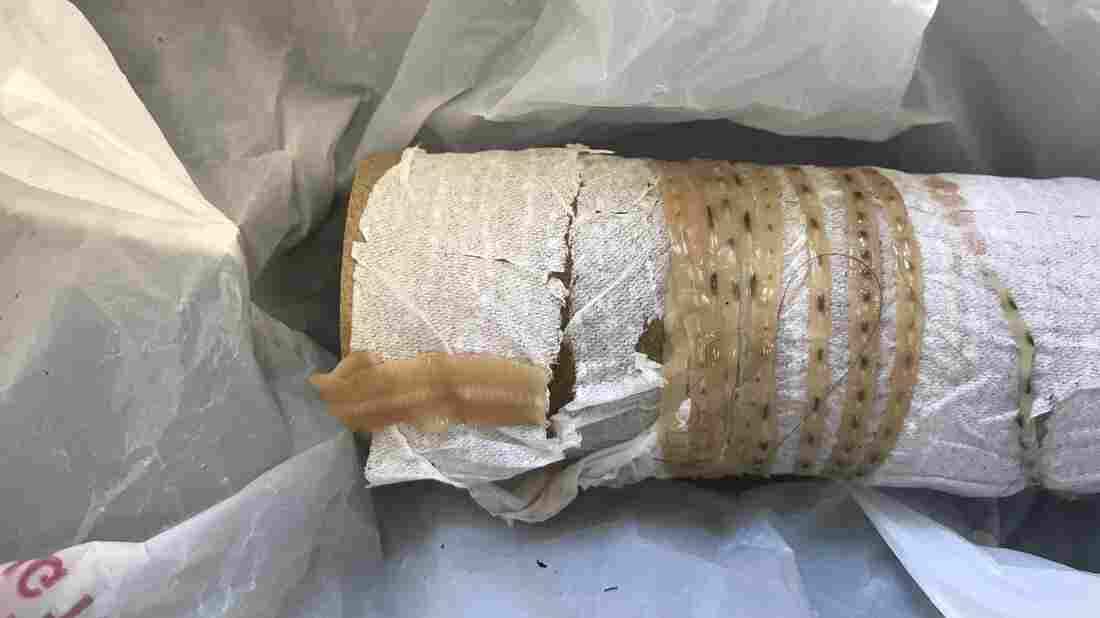 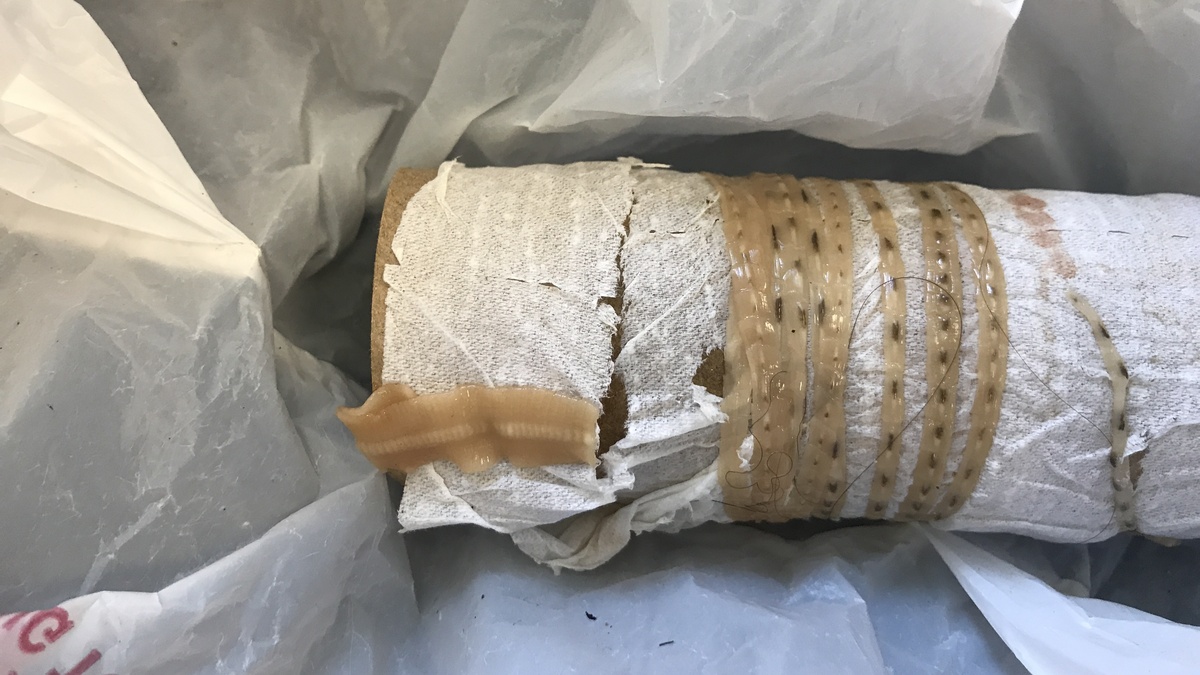 The tapeworm wrapped around a paper cylinder

Put away the soy sauce and wasabi and get ready to be grossed out.

A Fresno man and avid lover of sushi — more specifically, salmon sashimi — pulled a 5 1/2 foot-long tapeworm out his own body. It had been growing inside of him for some time.

Dr. Kenny Banh recounted the gruesome story as a guest on a recent episode of "This Won't Hurt A Bit," a medical podcast that dissects odd or unusual health cases with experts.

As Banh tells it, about two months ago he was working in the emergency room at Community Regional Medical Center in Fresno, Calif., when a young man walked in complaining of bloody diarrhea. But, unlike other patients who come in with similar ailments of abdominal pain and cramping, this guy also asked to be treated for worms. 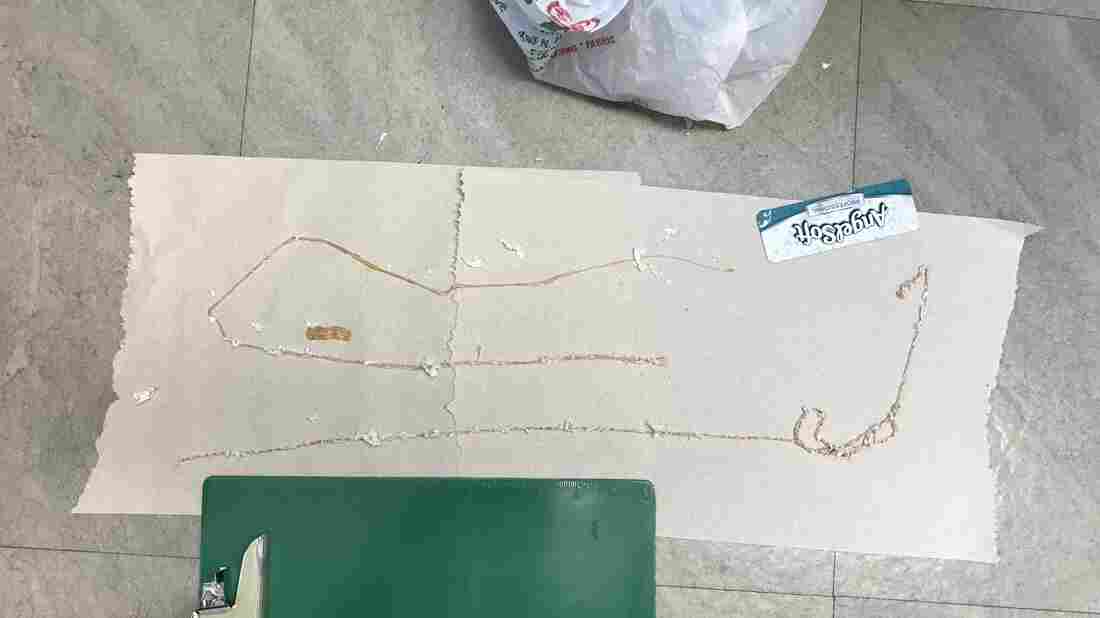 Tapeworm laid out on paper at the hospital Dr. Kenny Banh hide caption 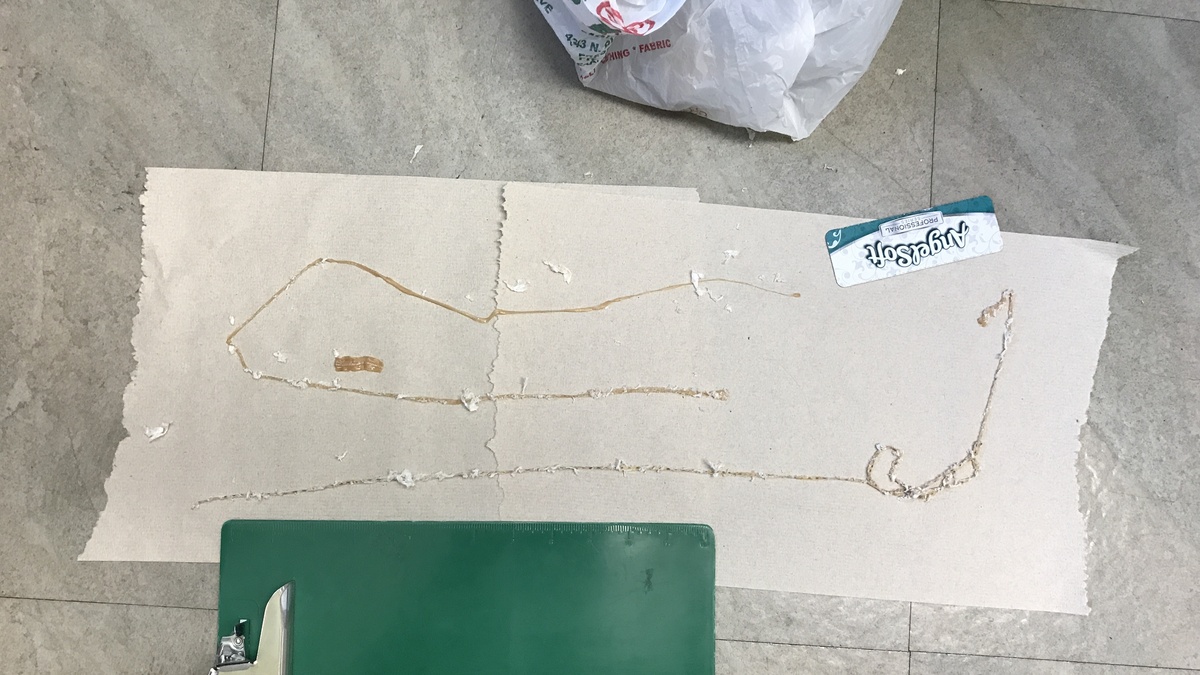 Tapeworm laid out on paper at the hospital

The request seemed odd to Banh, but then the anonymous young man handed him a plastic grocery bag. And that's when Banh saw it.

"I take out a toilet paper roll, and wrapped around it, of course, is what looks like this giant, long tapeworm," Banh said on the Jan. 8 podcast.

Apparently, the man was sitting on the toilet when the worm began wriggling its way out of him. He thought he was dying, Banh said. Going through the man's mind? " 'Oh, my goodness, my guts are coming out of me!' " Banh recalled.

As the man began pulling on the worm, and it continued sliding out inch by inch, the creature began moving — and rather than faint, he felt relieved. They weren't his entrails gooping out, but rather a tapeworm, he realized.

When rolled out on the floor of lobby of the emergency department, Banh says, the parasitic worm — officially called a helminth — was as long as he is tall: 5 feet, 6 inches. While that is uncomfortably long, it's not a record. According to Dr. Jessica Mason, who co-hosts the podcast, a tapeworm can grow up to 40 feet in length. 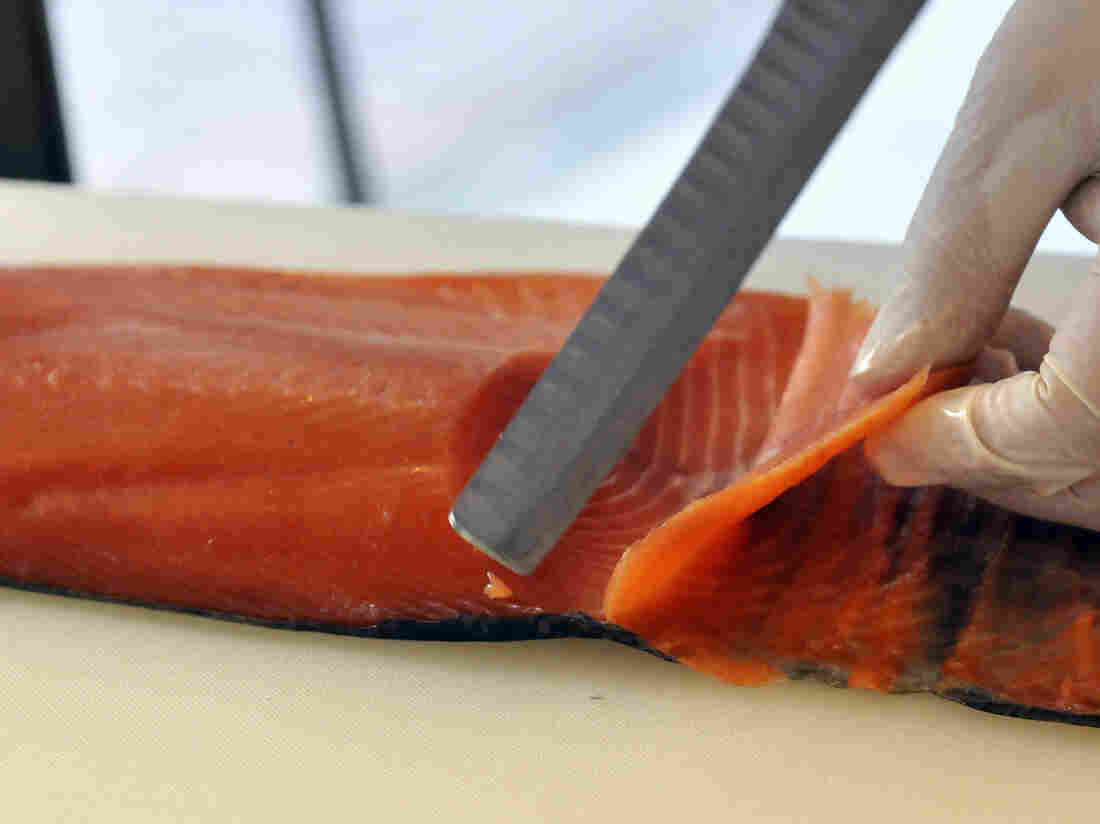 The Centers for Disease Control and Prevention published a 2017 report that found wild-caught salmon caught off the coast of Alaska may contain a Japanese tapeworm, rarely seen in the U.S. Yoshikazu Tsuno/AFP/Getty Images hide caption 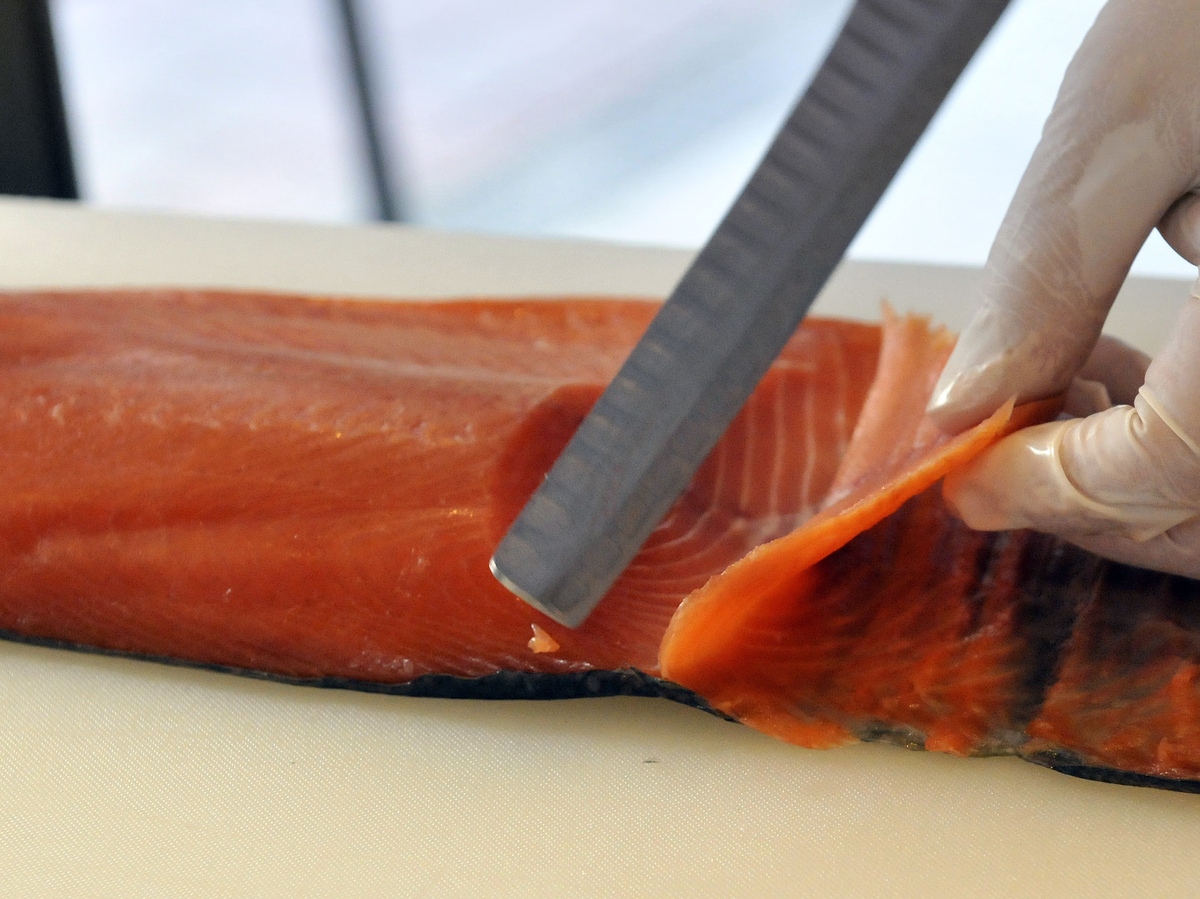 The Centers for Disease Control and Prevention published a 2017 report that found wild-caught salmon caught off the coast of Alaska may contain a Japanese tapeworm, rarely seen in the U.S.

Banh and the patient were initially confounded over how the tapeworm ended up in the man's body. He reported no trips abroad and couldn't recall drinking any questionable water. But then the man confessed his deep love of salmon sashimi. "I eat raw salmon almost everyday," he admitted to Bahn.

A 2017 study published by the U.S. Centers for Disease Control and Prevention found that wild salmon caught in Alaska could be infected with Japanese broad tapeworm — a parasite previously believed to only infect fish in Asia. And the CDC warned, "The risk of becoming infected with the Japanese tapeworm parasite is most prevalent when consuming raw or undercooked fish, particularly in dishes such as sushi, sashimi and ceviche." The CDC says the parasite and the larvae that are buried deep in salmon muscle can be destroyed when fish is adequately cooked or frozen.

Still, the infection remains uncommon in humans. Only about 2,000 cases have been reported in people — mostly in northeastern Asia, according to Roman Kuchta, the lead researcher on the study. (Pork and beef tapeworms, which are a different genus, are relatively more common in America, but the CDC still estimates there are less than 1,000 such cases a year in the U.S.)

Here's Something You Don't Want To Know

Most of the time, this type of tapeworm leads to only minor symptoms, says the CDC. Often, people don't even know they have it. But in exceptional cases the infection can cause complications including vitamin B12 deficiency, intestinal obstruction and gall bladder disease.

Treating the parasite is simple. A single dose of de-worming medication — the exact same pill given to dogs — is all it takes to kill all the worms.

In the meantime, Banh says the man plans to lay off the sashimi. For now.