Accessibility links
China Seizes Publisher Of Banned Books Again — Just Months After Releasing Him : The Two-Way Gui Minhai, a Hong Kong-based bookseller with Swedish citizenship, was on a train to Beijing for medical treatment when police detained him. Now, Swedish authorities are demanding answers. 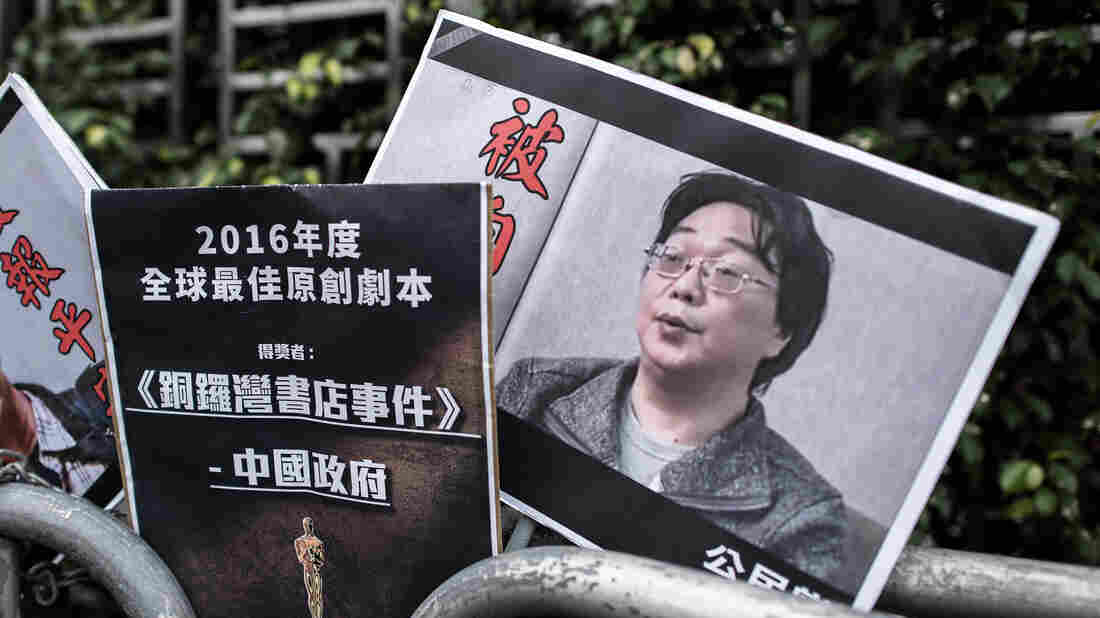 A placard showing Gui Minhai is seen outside the China liaison office in Hong Kong in January 2016. At the time, the publisher had disappeared, only to surface later in Chinese detention. Authorities there released him last fall. He was arrested again last weekend. Philippe Lopez/AFP/Getty Images hide caption 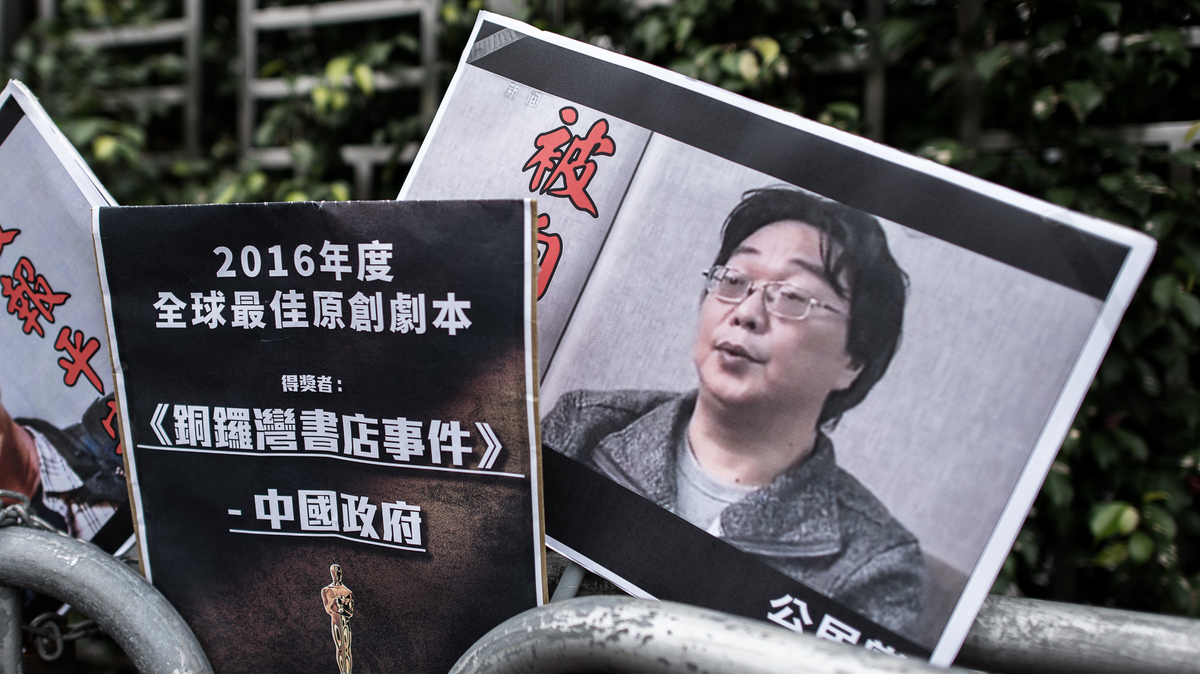 A placard showing Gui Minhai is seen outside the China liaison office in Hong Kong in January 2016. At the time, the publisher had disappeared, only to surface later in Chinese detention. Authorities there released him last fall. He was arrested again last weekend.

Three months after Hong Kong-based publisher Gui Minhai left police custody in China, where he had languished for more than two years after disappearing under murky circumstances, Chinese authorities again arrested him on Saturday.

Gui, a Swedish citizen, had been on a train with two Swedish diplomats to seek medical treatment in Beijing.

"They were on the train for about five hours, I think," his daughter Angela Gui, a graduate student in the U.K., told Radio Sweden on Monday. "And at one of the stops before Beijing, there were about 10 men in plainclothes that came in and said they were from the police — and just grabbed him and took him away."

"China's ambassador to Stockholm was summoned to the Foreign Ministry on Saturday and yesterday," Sweden's foreign minister, Margot Wallström, said in a statement released Tuesday.

Gui's trip to Beijing "was completely in accordance with basic international rules. The Chinese authorities have repeatedly assured us that Gui Minhai is a free man," she added. "We expect our citizens to be released immediately and given the opportunity to meet Swedish diplomatic and medical staff."

For Daughter Of Missing Hong Kong Bookseller, Activism Is Not A Choice

The arrest Saturday marks a new twist in a tortuous series of events for Gui — who, though born in China, had to give up his Chinese citizenship when he was naturalized nearly three decades ago as a Swedish national.

Gui was among five publishers at Hong Kong's Causeway Bookstore who disappeared without explanation in 2015. The store had a reputation for selling books about Chinese politics banned on mainland China — and the booksellers' case elicited outrage from many people in Hong Kong who viewed it as a violation of civil liberties and encroachment on the city's autonomy.

None of these concerns were assuaged when Gui resurfaced in 2016 in Chinese custody, proclaiming his guilt for a deadly drunk-driving collision more than a decade earlier. The televised confession struck many, including the writers' advocacy organization PEN America, as "staged."

He was released last October — though his daughter pointed out that that release didn't come with complete freedom: "He was put under a police-managed flat and he was under surveillance."

And she said the situation was only complicated by health problems.

"When he was released, he had developed a set of neurological symptoms that he didn't have when he was taken into custody in 2015. He had a lot of tests done and he was told that he had ALS," which is also known as Lou Gehrig's disease.

"Because he's a Swedish citizen," she continued, "he wanted medical treatment in Sweden or elsewhere in Europe. So he had arranged with the Swedish Embassy to travel up to Beijing on Saturday by train to see a Swedish doctor who had been flown in to examine him."

Her father's arrest "wasn't anything that anybody expected," she added, "because otherwise he wouldn't have taken that train."

As The New York Times reports, the Chinese foreign ministry has denied knowledge of the incident. "This is not a matter that falls under the purview of the Ministry of Foreign Affairs," a spokeswoman said, according to the paper. "I don't understand this specific matter."

This response has not satisfied international critics, including Summer Lopez of PEN America, who condemned the incident in a statement.

"China's treatment of publisher Gui Minhai — a story of abduction, detention, and now denial of medical care — demonstrates flagrant disregard for the rule of law and human rights," she said.