Accessibility links
Save The Children Suspends Afghanistan Operations After Deadly Attack : The Two-Way Three staff members were killed and more than a dozen wounded when gunmen attacked the aid organization. ISIS has claimed responsibility; the Taliban have specifically denied any involvement.

Save The Children Suspends Afghanistan Operations After Deadly Attack

Save The Children Suspends Afghanistan Operations After Deadly Attack 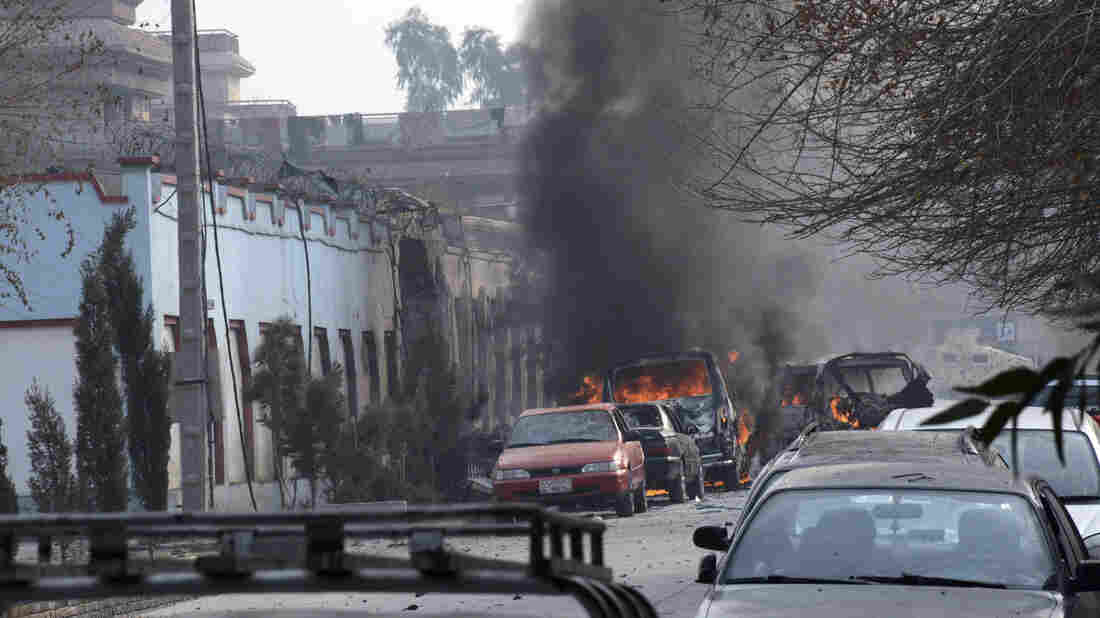 Vehicles burn after a deadly suicide attack in Jalalabad, east of Kabul, Afghanistan, on Wednesday. Gunmen then opened fire on the building. Stringer/AP hide caption 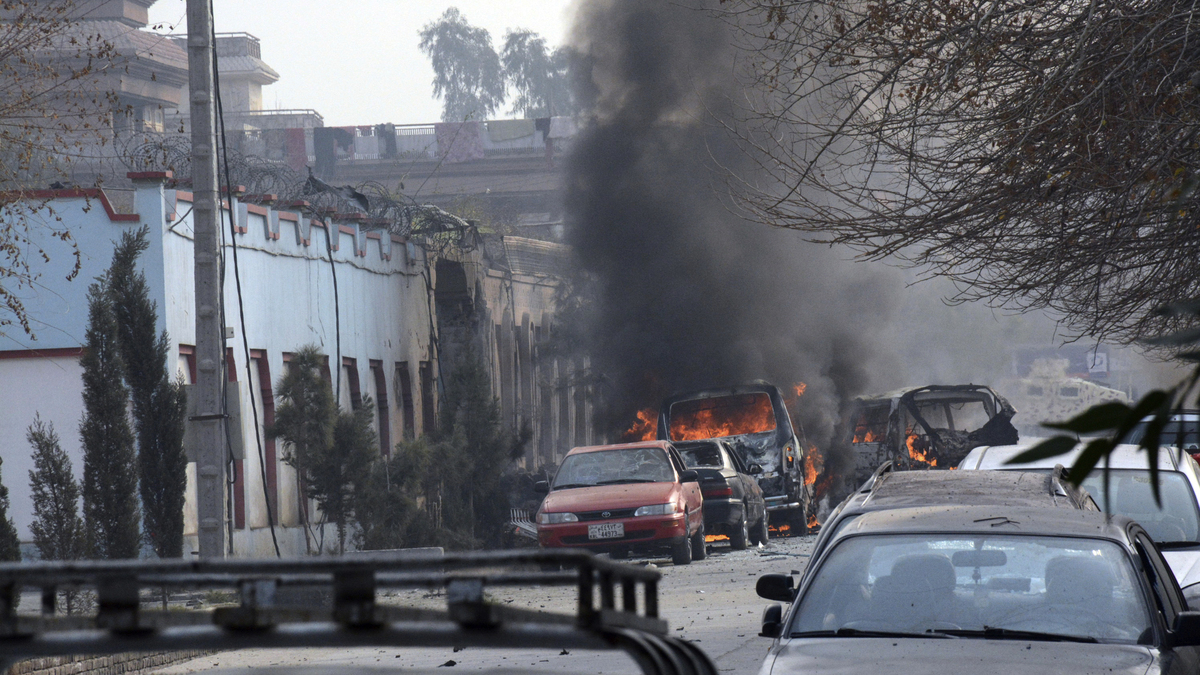 Vehicles burn after a deadly suicide attack in Jalalabad, east of Kabul, Afghanistan, on Wednesday. Gunmen then opened fire on the building.

Save the Children has temporarily suspended all of its operations in Afghanistan, after gunmen carried out a brutal attack on its provincial office in Jalalabad on Wednesday, killing three staff members in an assault that also included explosives.

"All other staff have been safely rescued from the office," Save the Children president and CEO Carolyn Miles said. "Four [staff members] were injured in the attack and are receiving medical treatment."

#AFG Jalalabad fire brigade in the area and are trying to put down the fire, Ningarhar police sources. Video shared with me. pic.twitter.com/W7GFrZwGgE

The aid group has been working in Afghanistan since 1976. Despite the halt, Miles said, "we remain fully committed to helping the most deprived children of Afghanistan."

Hours after the attack, SITE Intelligence and other jihad monitoring groups reported that ISIS claimed the attack, referring to a posting by the extremist group's media arm, Amaq. The notice said the attack targeted British and Swedish organizations; Save the Children was founded in England in 1919.

In Jalalabad, local officials said that at least 14 people were hurt in the attack and were evacuated to the Nangarhar regional hospital; however, the number of casualties could fluctuate, hospital spokesman Inamullah Miakhial said, citing a gun battle that followed the primary assault.

Afghanistan's Tolo news service, monitored by Al-Jazeera, said an initial blast in the attack was caused by a suicide car bomber.

The BBC quoted local journalist Bilal Sarwary as saying police told him that Afghan commandos were trying to flush out the attackers, who were on upper floors of the building armed with heavy machine guns, grenades and rocket-propelled grenades.

Our statement on the incident in Jalalabad, Afghanistan. #Jalalabad #Afghanistan pic.twitter.com/q0Ro8YhV2q

Islamic State militants have reportedly been active in and around Jalalabad, located about 40 miles from the Pakistan border, since 2015. 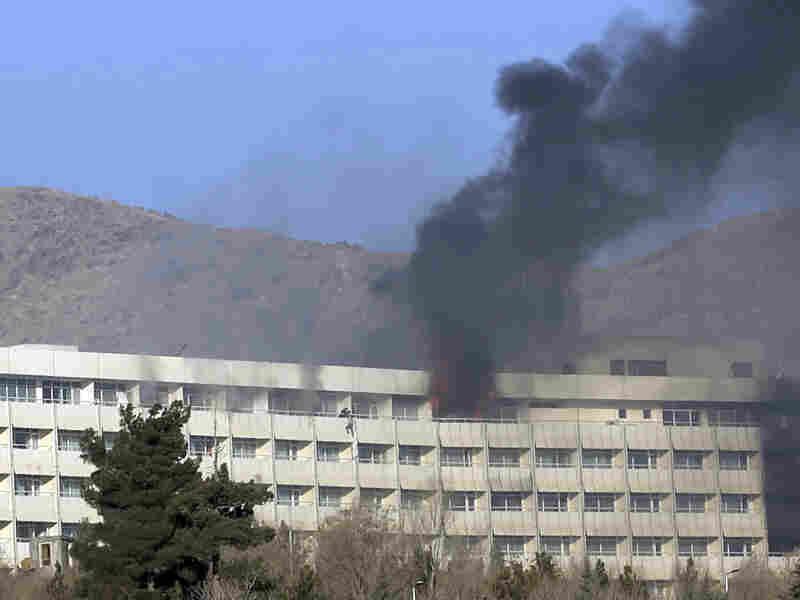 Men try to escape from a balcony of the Intercontinental Hotel after an attack in Kabul, Afghanistan, on Sunday. Rahmat Gul/AP hide caption 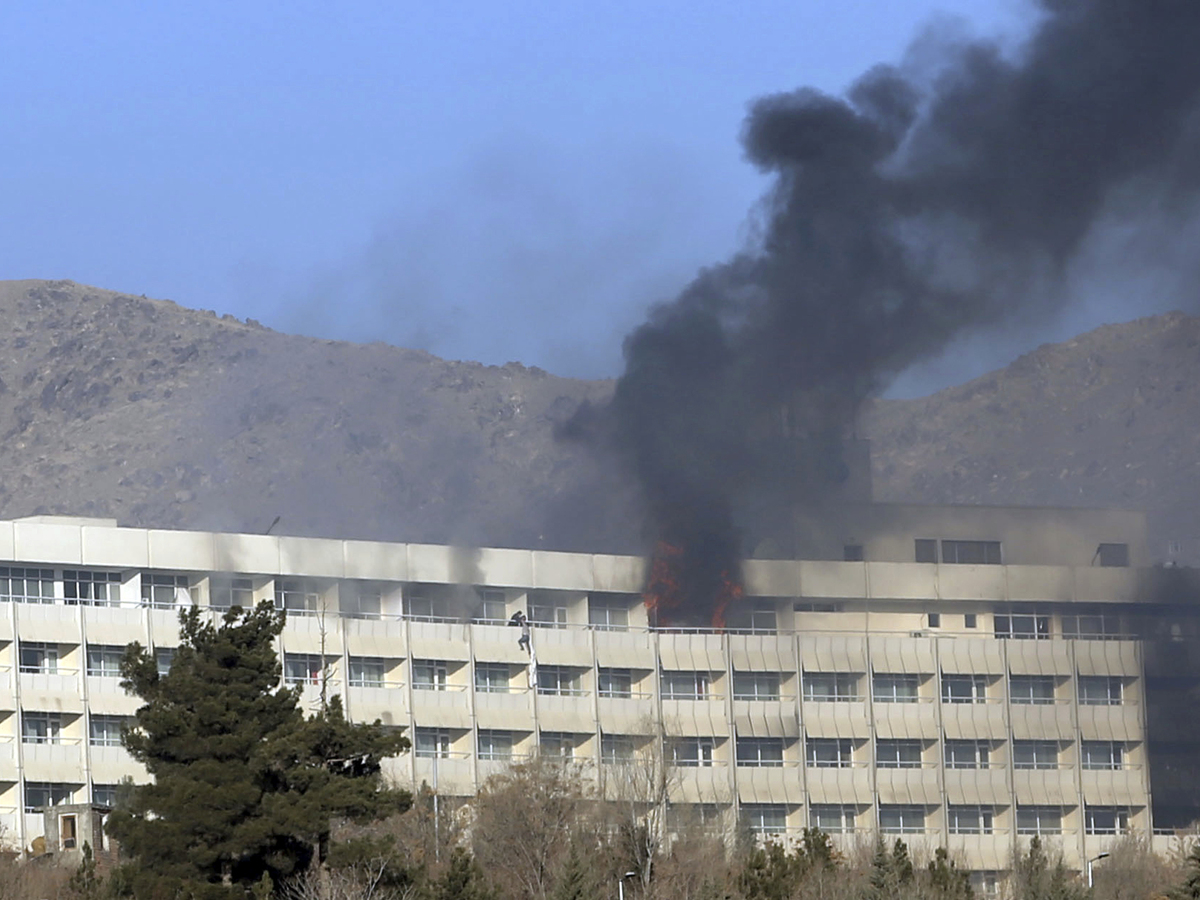 Men try to escape from a balcony of the Intercontinental Hotel after an attack in Kabul, Afghanistan, on Sunday.

In a statement, Helle Thorning-Schmidt, the former Danish prime minister and current CEO of Save the Children International, said the nongovernmental organization was "devastated" at news of the attack. "Our primary concern is for the safety and security of our staff," she said.

Over the decades of its work in Afghanistan, Save the Children says, it has provided "life-saving health, education, nutrition and child protection programs that have helped millions of children."

The attack on the aid organization follows a lengthy siege on Kabul's luxury Intercontinental Hotel over the weekend that killed at least 22 people, including several U.S. citizens.

As NPR's Merrit Kennedy reported, the attack on the heavily protected hotel, for which the Taliban claimed responsibility, is "the latest in a series of large attacks in Kabul. An attack in December on a cultural center killed at least 41 people. And in May, a truck bomb in Kabul killed more than 150 people."

And in Jalalabad last month, a motorcycle-riding suicide bomber struck outside a soccer stadium in the city, killing at least six people and wounding 13.

A previous version of this post referred to Helle Thorning-Schmidt as the former Dutch prime minister. In fact, she was the prime minister of Denmark.