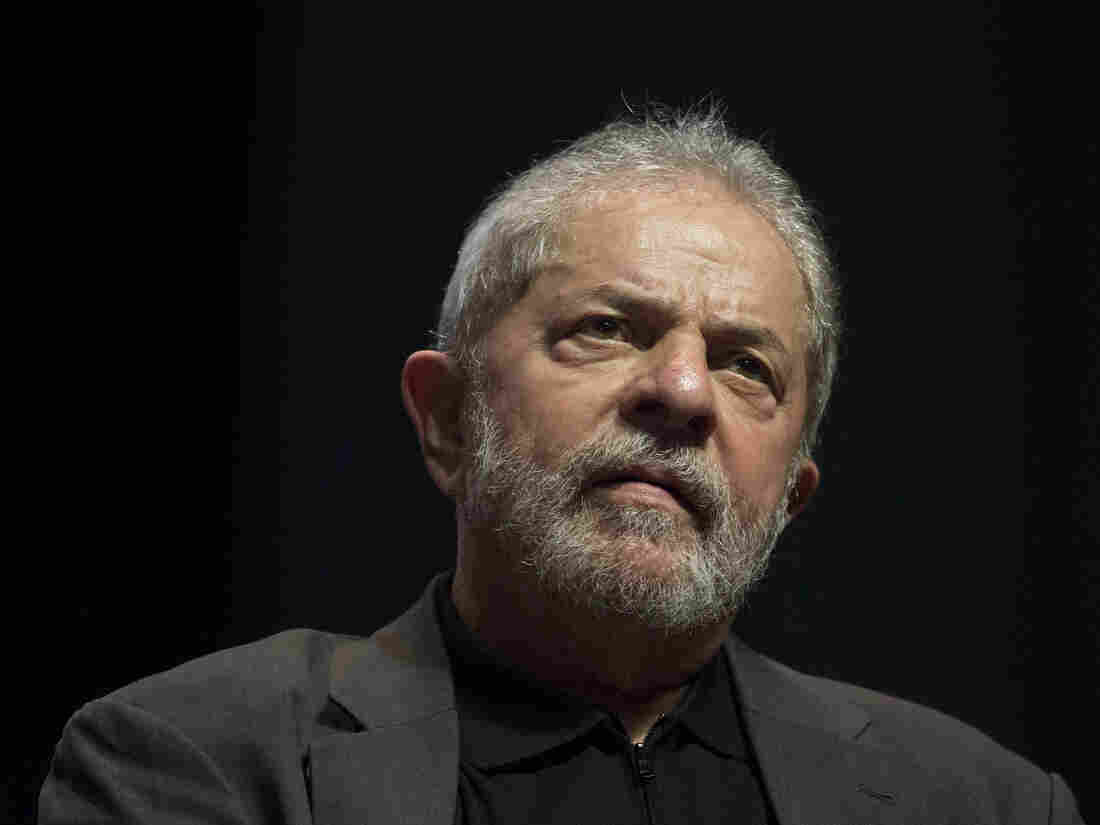 The three judges in the southeastern coastal city voted Wednesday to uphold the conviction and increase Lula's prison sentence — from the original ruling of nine and a half years to just over 12.

"I consider the culpability in the case extremely high," Judge João Pedro Gebran Neto said Wednesday, according to The Associated Press. "This is about a former president and a corruption scheme that prevailed for years."

Da Silva, a 72-year-old leftist politician commonly known simply as "Lula," was convicted last July on charges ranging from money laundering to accepting more than $1 million in kickbacks. Central to those charges was the allegation that he accepted a beachfront apartment in return for boosting the prospects of Petrobras, Brazil's state-run oil company, in its pursuit of government contracts.

Lula quickly appealed the conviction, and he has remained free while his appeal has been under consideration. He continues to deny the charges, casting them as instruments in his rivals' campaign to discredit him.

"I know I committed no crime," he told a rally of thousands of supporters in Porto Alegre on Tuesday, as Reuters reports. "They fear a Lula comeback in 2018. They fear the good things we achieved."

A former factory worker who ascended to Brazil's highest office, Lula left it roughly seven years ago with very high approval ratings — and he has made no secret of his designs on returning this year. Based on recent opinion polls, which reportedly show him clearly outpacing his nearest competition, he was a front-runner to win the October presidential election.

But Lula's presidential aspirations will be deeply complicated by the ruling upholding the lower court conviction. Lula will have another opportunity to appeal to higher courts — but NPR's Philip Reeves points out, this ruling "means he's ineligible to run, though he'll only be barred after registering as a candidate." 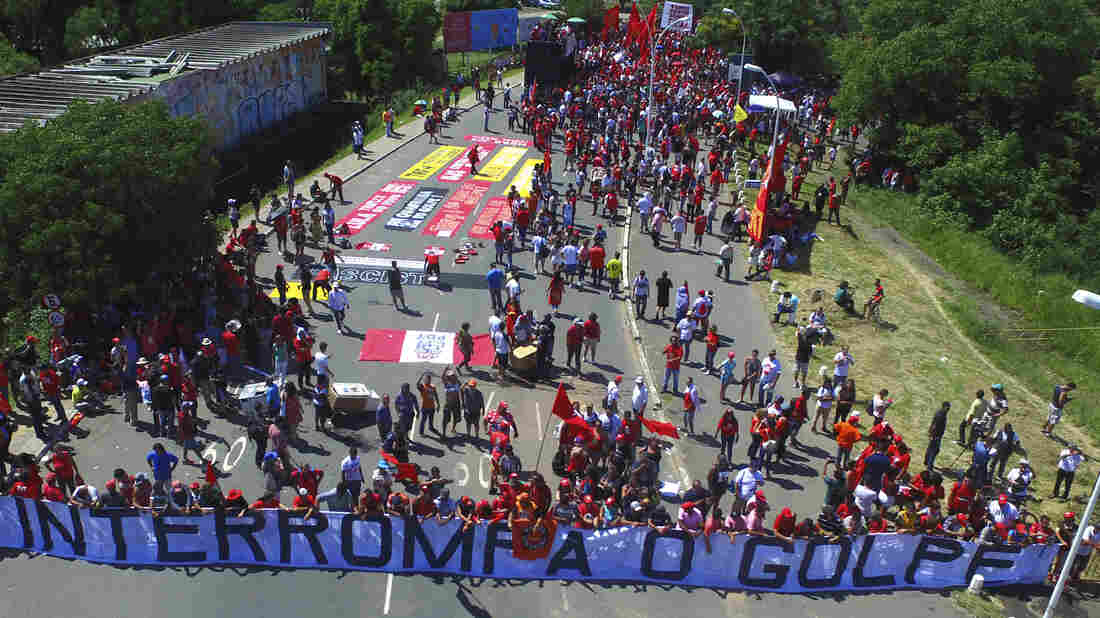 Lula's supporters hold a banner that reads, in Portuguese, "Stop the Coup." The demonstrators had gathered Wednesday near the court in Porto Alegre, Brazil, where judges ruled unanimously to uphold the former president's graft conviction. Wesley Santos/AP hide caption 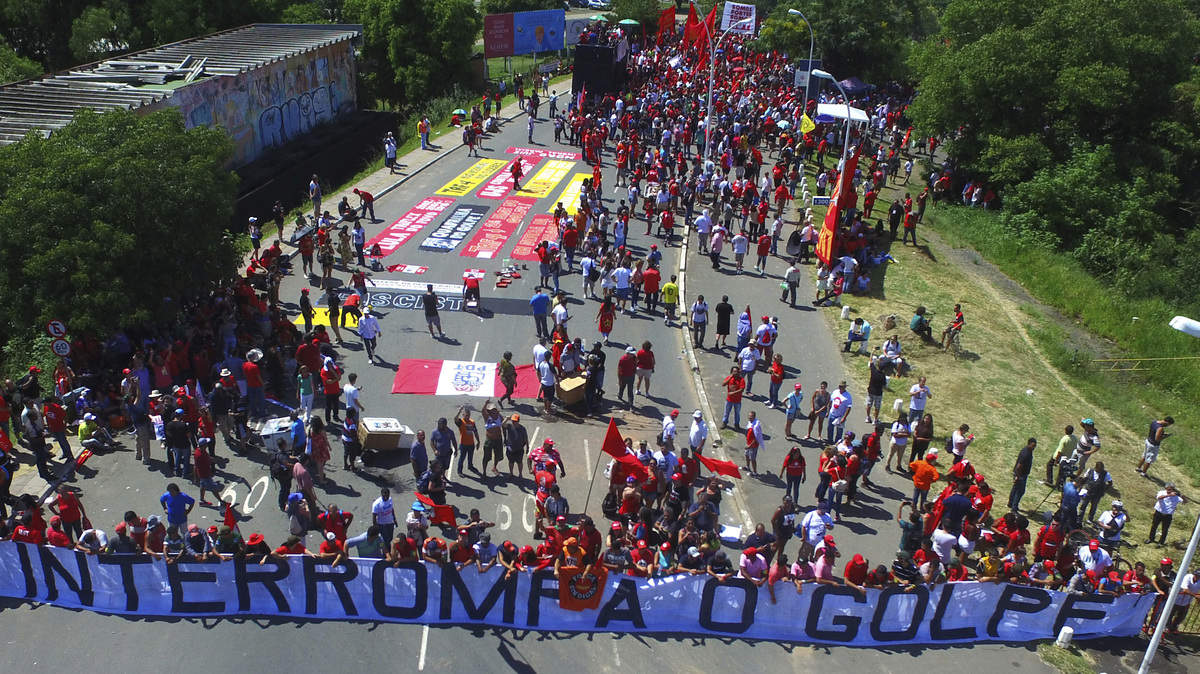 Lula's supporters hold a banner that reads, in Portuguese, "Stop the Coup." The demonstrators had gathered Wednesday near the court in Porto Alegre, Brazil, where judges ruled unanimously to uphold the former president's graft conviction.

In the meantime, Brazilian authorities are preparing for the possibility of clashes between the demonstrators supporting Lula and those calling for his imprisonment. Reuters reports officials in Porto Alegre have "deployed several thousand police and mounted a four-block security perimeter around the appeals court to prevent any disruption of Wednesday's session."

So far, the clashes have played out on social media instead. As the AP points out, three of the top 10 topics trending worldwide on Twitter by Wednesday afternoon had to do with the appeals decision, with warring hashtags reflecting Brazil's deep divisions.

Underlying the unrest is a central question: Is Lula a crusader for the underprivileged or a symbol of the very corruption he publicly denounced?

If the latter, he would not be alone.

Operation Car Wash, a massive, years-long corruption investigation, has ensnared many of the country's politicians and business figures in high-profile allegations. That includes not only Lula, whose case arose from the probe's findings, but also the executives of Brazil's meatpacking giant JBS and even the sitting president, Michel Temer.

Temer faces corruption charges of his own, and he narrowly escaped an attempt last August to suspend him so he could stand trial.