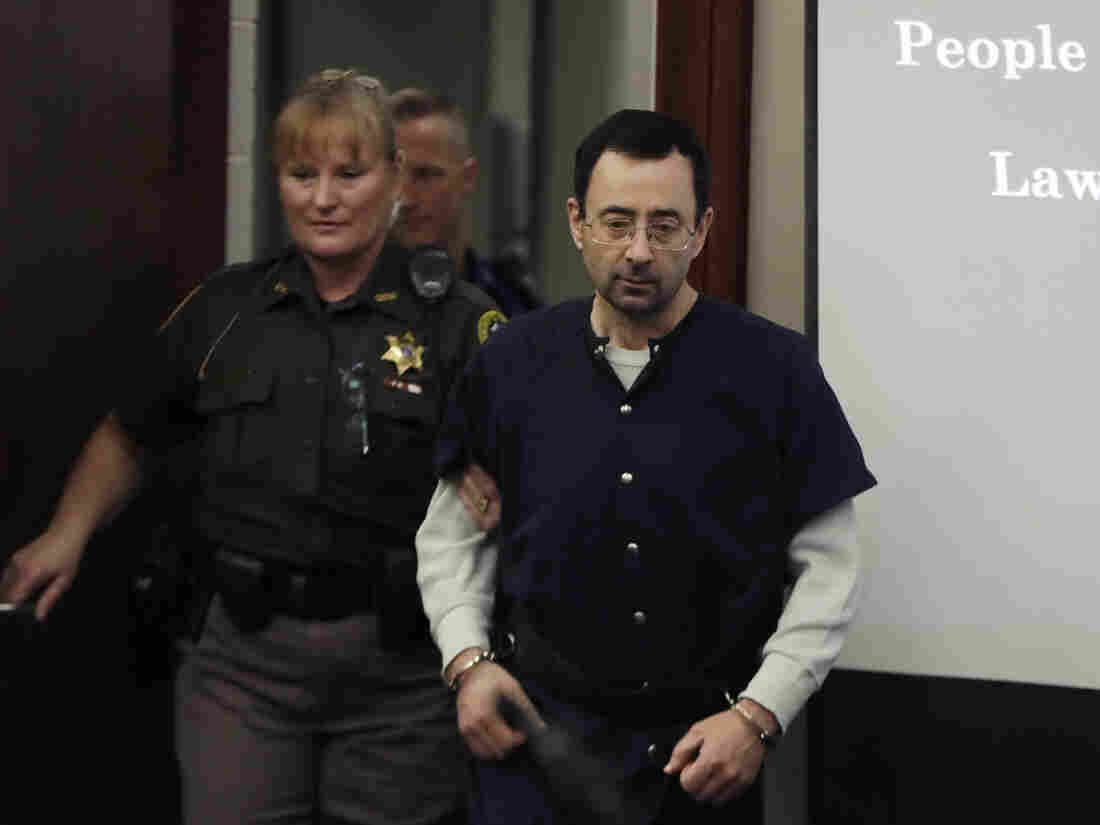 Larry Nassar is escorted into court in Lansing, Mich., on Wednesday, where he was sentenced to 40 to 175 years in prison. Carlos Osorio/AP hide caption 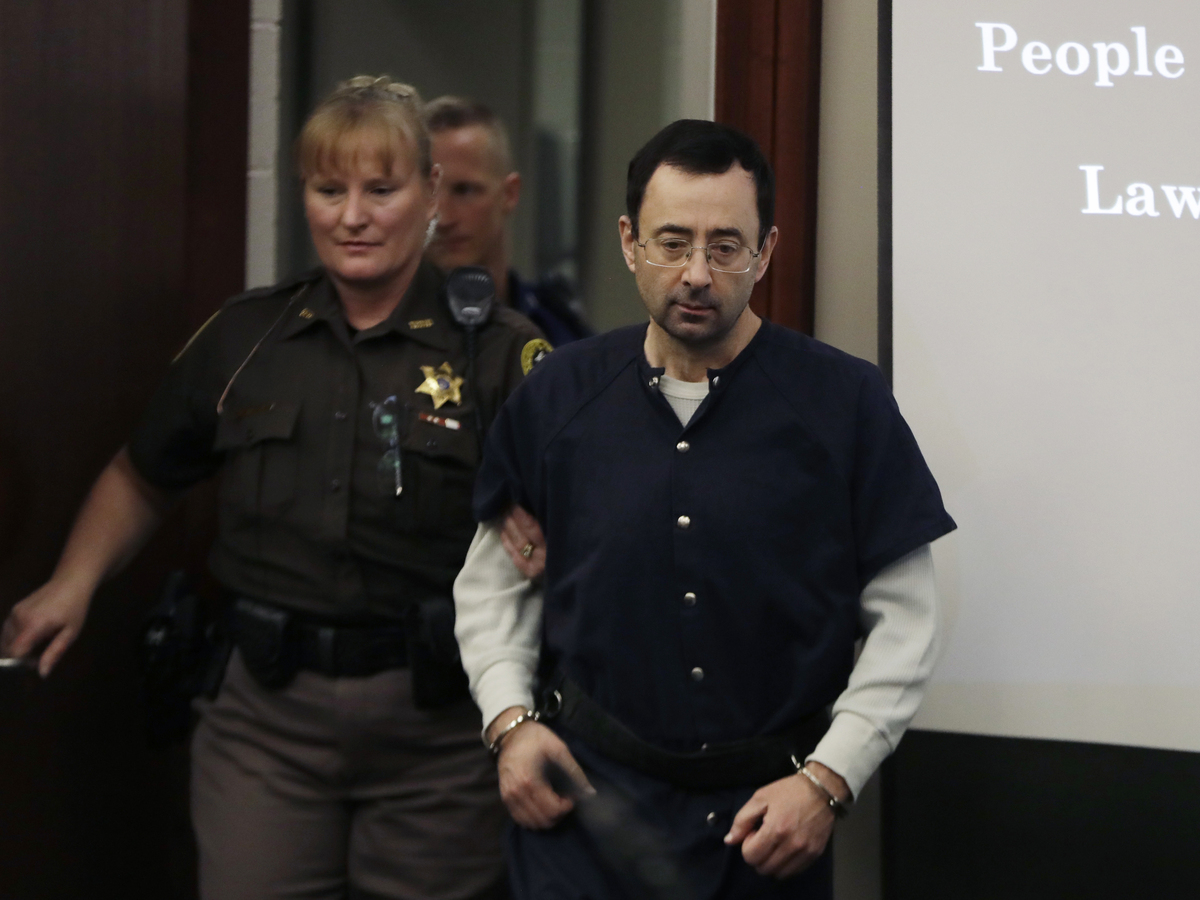 Larry Nassar is escorted into court in Lansing, Mich., on Wednesday, where he was sentenced to 40 to 175 years in prison.

Larry Nassar, the USA Gymnastics and Michigan State University doctor who has admitted to abusing girls and women who were receiving treatment from him, was sentenced to 40 to 175 years in prison on Wednesday.

"I just signed your death warrant," Judge Rosemarie Aquilina said, in her Lansing, Mich., courtroom as she read Nassar's sentence.

Wednesday night, MSU said that university President Lou Anna Simon is stepping down under pressure because of the Nassar sex abuse scandal. Simon was widely criticized for how the school handled the scandal. Her resignation letter reads in part:

"To the survivors, I can never say enough that I am so sorry that a trusted, renowned physician was really such an evil, evil person who inflicted such harm under the guise of medical treatment. ...

"The survivors' accounts are horrific. They are tragic, heartbreaking, and personally gut-wrenching. I take solace that many victims have indicated that the opportunity to confront Nassar is a step toward healing. ...

"As tragedies are politicized, blame is inevitable. As president, it is only natural that I am the focus of this anger."

Nassar's sentencing came as the capstone to days of powerful and emotional testimony from more than 150 women and girls who say they were abused by the doctor.

Judge Aquilina allowed scores of accusers to give victim impact statements, and she said she took their statements into account, explaining that the others who spoke added to the credibility of the seven whose cases were before her.

Nassar is dry eyed. There are tears in the courtroom. "Judge, he doesn't have any money to pay court costs and fines," defense attorney Matt Newburg says. "The victims deserve the money. The county will survive one way or another," Aquilina says.

Nassar, who has admitted to molesting multiple girls and women who were under his care, had already been sentenced to 60 years in prison on separate federal child pornography charges.

During the proceedings, Aquilina read portions of a letter that Nassar had given her a couple of months after entering his plea, but she refused to read it in its entirety. "There is some information here which troubles me in regards to the victims," she said. "I don't want them re-victimized by the words in the letter."

In the parts that were read aloud, Nassar criticized a federal judge as going "ballistic" in sentencing him to 60 years, and he continued to defend his actions.

"I was a good doctor, because my treatments worked and those patients that are now speaking out are the same ones that kept coming back over and over," she read from the letter.

"Hell hath no fury like a woman scorned," the letter went on, to gasps from the courtroom. "It is a complete nightmare." He wrote that the FBI had investigated him in 2015 but didn't file charges "because it was medical."

"Your decision to assault was calculated, precise, devious, despicable," Aquilina says. "You can't give them back their innocence, their youth. You can't give a father back his life, or return a daughter to a mother. You played on everyone's vulnerability. I'm not vulnerable."

Aquilina looked to Nassar and said, "Would you like to withdraw your plea? Because you are guilty, aren't you?" He replied that he had said his plea.

"I wouldn't send my dogs to you, sir," she said. "There's no treatment here, sir. You finally told the truth. Inaction is an action. Silence is injustice." Nassar looked stricken during the judge's remarks.

Before receiving the sentence, Nassar had struck a more conciliatory tone. He addressed the victims, often going off mic as he turned around to face them.

"There are no words that can describe the depth and breadth of how sorry I am for what has occurred," said Nassar. "I will carry your words with me for all of my days."

Rachael Denhollander was the first person to file a criminal complaint against Nassar in 2016.

"I am very grateful for Judge Aquilina and the care she has shown to all of us," Denhollander told reporters outside the courthouse after the sentence was handed down. She said she was not surprised by the number of victims, "because that's how pedophiles operate."

Judge Aquilina to Rachael Denhollander: "You started the tidal wave. You made all of this happen. You made all of these voices matter. Your sister survivors and I thank you. You are the bravest person I have ever had in my courtroom." https://t.co/KWY1pm3GPO pic.twitter.com/beMPHpCxup

In earlier courtroom testimony, Denhollander called Nassar "the most dangerous type of abuser," projecting a wholesome image while carefully grooming his victims.

U.S. Olympic Committee CEO Scott Blackmun released an open letter apologizing for Nassar and for not being present for the athletes' testimony.

"We have said it in other contexts, but we have not been direct enough with you," he wrote. "We are sorry for the pain caused by this terrible man, and sorry that you weren't afforded a safe opportunity to pursue your sports dreams. The Olympic family is among those that have failed you."

USA Gymnastics CEO Kerry Perry, who took leadership of the organization on Dec. 1, 2017, released a statement that called Nassar's crimes "despicable" and pledged to create a culture that empowers and supports athletes.

"I am profoundly saddened that a single woman, a single girl, a single athlete was hurt. USA Gymnastics applauds Judge Rosemarie Aquilina for handing Nassar the maximum sentence of up to 175 years, in an effort to bring justice to those he abused and punish him for his horrific behavior," she wrote. "I will not [waver] on my commitment to focus each and every day on our organization's highest priority — the safety, health and well-being of our athletes."

A previous version of this story incorrectly said Larry Nassar's sentence was handed down on Tuesday. It was Wednesday. Additionally, we previously said Nassar's statement to victims came after his sentence was announced. It came before the sentence.